October 4th, 2012 | Posted by Brianna in Slideshow Pictures | The Places We've Been | United States
We sat at the Nautica Pub in Birch Harbor, Maine for an hour after close on Monday night.  There were six of us left including the bartender, Mona, who allowed the crew of mostly locals to enjoy an extra round while she cleaned, restocked, and closed up shop.  The conversation rose and fell, joyful but unexcited even at its height.  Al told us about a breakfast place we ought to have tried, and Mona asked questions about our traveling home.  George shared stories about the old names, buildings, and traditions of the area.  Bob bought us another round.  We talked about Maine and we talked about Montreal.  We talked about football and we talked about fighting fires.  It’s a funny thing sitting at a bar with a group of people you’ve never met before.  As we chatted casually about the differences between Winter Harbor and everywhere else, George (called “an older gentleman” by Ian’s 74-year-old seat neighbor, Bob) looked me square in the eyes and said reminiscently, “You know, people are the same anywhere you go.”  His time-worn smile melted me.  By George, I think he must be right.

Earlier that day Ian had done a fair amount of failed googling in search of a place for me to watch what turned out to be a disgracefully ugly Cowboys game (blame those five picks on the Giants loving bartender), but it was an hour drive to the closest restaurant or bar open past “whenever it got slow” so we decided to try the only place on the peninsula with lights still on in hopes of catching at least the first quarter.  In case you missed that, it was 8:15 and all of the businesses in the entire 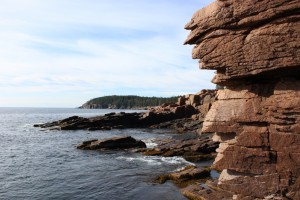 region were closed. That’s about how things seem to work around Winter Harbor though.  You give up some conveniences for the incredible peace of subtle disconnection.  Something in the salty air or in the sound of crashing waves or in the sight of the jagged coastline’s seemingly endless collection of dinosaur sized boulders whispers convincingly to you to just slow down.  And so we did – and we loved it.  Maine, and Winter Harbor specifically, offers its visitors a retreat for the mind and soul amidst its monumentally beautiful scenery and refreshingly simple style.

Below are a list of things I learned last week and a slideshow of our favorite photos from our time in Maine.