So you just lost all of your credit cards and driver’s licenses in a foreign country, huh? You must be a beginner. That would only, could only, happen to a virgin traveler. Wait, no, that’s not right. That’s not right at all. As it turns out, even after living on the road for a year, a tiny mishap (or culmination of decisions) can lead to a very sudden “oh shit” moment. And “oh shit” doesn’t even begin to cover what it feels like. Trust us – we know.

On September 4th we were in the midst of the multiple day process of importing our car to Colombia and after a long day at ports and customs offices, we decided a drink was in order. As part of our typical walking-out-the-door routine, we confirmed who had the keys, confirmed who had the money, and confirmed… wait, who has the money??? We checked pockets, checked the camera bag, checked underneath and inside of every other thing in our hotel room, retraced steps and re-retraced steps. We usually keep our working cash in a small zippered pouch that we bought in San Cristobal de las Casas in Chiapas, Mexico. Due to our current undertaking, we had also tucked our secondary IDs (driver’s licenses) and all three of our credit cards into that pouch. We almost never take all of our important cards out at the same time, and if we do, they certainly aren’t kept in the same pocket, let alone the same pouch, but we needed lots of cash to pay port fees, and banks have limits on how much you can pull out of each account per day, so we’d taken all of our cards with us. And we were exhausted physically and mentally, making it easy to let small things slip, like tucking all of these important items into one small pouch and then leaving that small pouch in the back of taxi cab. It happened though, and no amount of rehashing ways it could have been prevented were going to bring back that valuable little pouch. So what could we do?

First and foremost, we took a page out of Warren and Betsy’s 24/7 Relationship handbook (yes, them again – they rock) and resisted the urge to freak out at the same time. In April, Betsy wrote this great piece about the importance of being the hero when your partner is in crisis mode, an approach that does not aim to calm the stressed mate nor fuel their fire, but rather to allow that person to process the experience while you “quietly and effectively work to defuse the situation”. On this particular Wednesday evening, Ian was already physically exhausted and mentally broken down, and having been the last person with the pouch, he took the news especially rough. I could literally see it hit him, like in a movie when an explosion occurs and the picture slows dramatically panning the shocked faces of the soot covered characters and for half a second nobody breathes. He had inadvertently called the freak out, and so the only job left was the one that involved remaining calm and working towards a solution. This balanced partnership happens more naturally than one might expect and is probably part of the reason why we’re able to travel so well together.

2. Assess the Situation and Take Inventory 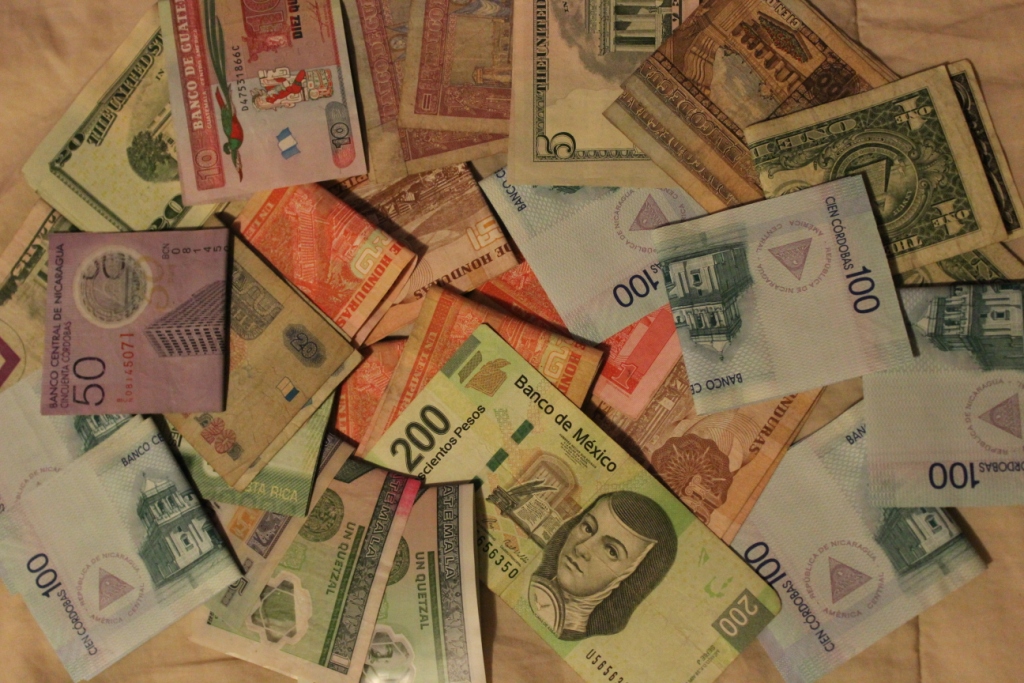 So what if we don't have debit cards? We've got $30 in 7 different currencies!

Within minutes we were able to pinpoint the loss to our departure from a taxi in front of our hotel an hour earlier. With more than 300 different cab companies in the city though and no identifying features of our taxi except that the driver liked baseball and was named Fernando, we also knew quickly that our chances of tracking down the pouch were quite slim. Fernando seemed like a nice guy and all, but he was going to have to find the pouch before someone in the back of his cab did, remember who the people on the IDs might be, recall exactly where he dropped us off at, and then go all the way across the city to return it. After a conference with the hotel staff, we decided to operate on the assumption that it was gone for good (though they did put an announcement on the taxi-cab radio for us the next morning). Concurrently, we had taken inventory of exactly what had been lost which came to two driver’s licenses, three credit cards, and $100 cash. Taking inventory also involves reviewing what we have to work with though, and this area is where we really got lucky. We had an amazing support system of family and friends willing to help us, we had $200 dollars in seven different Central American currencies, and we had, by fortunate accident*, a single active debit card at Ian’s mom’s house in Kansas. We could work with that.

*In January, Ian’s card numbers had been stolen (and then used to buy snacks and jewelry) from an office of the national bank of Mexico in Tijuana where we had purchased our temporary auto import permit. When Ian’s mom received the replacement card, she attempted to mail it to us in San Cristobal de las Casas, but it never made it there, so we ordered a second replacement and opted to have her hold on to that one.

3. Look for Solutions in Segments

In the moment, there were many problems in front of us. Our pouch was gone. A decent percentage of our remaining cash was gone. Our driver’s licenses were gone. Our credit cards were gone. We were tired. We were hungry. To find solutions though, the pile needed to be sorted and the problems that weren’t fixable needed to be removed altogether. What we actually needed to tackle was best defined by a list of three simple things: We needed to figure out how to get new licenses, we needed to figure out how to handle the cancellation and re-issuance of our new debit/credit cards, and we needed to figure out how to get cash. All of these things of course, included the extra step of getting those items not just to our US mailing address, but to our current location in Colombia. Ian was going to handle research into the licenses, and I was going to see what we could do about money. One step at a time.

Fortunately for us, the state of North Carolina allows for the re-issuance of lost licenses via their website for $10 per license. We were going to have to hope that photocopies and a sob story would work for the next week or so, but this was a lot better scenario than an international flight for a replacement. The actual license number is required for this process, and we would not have had the number were we not on the road and carrying photocopies/scans of all of our documents. The cards were ordered in minutes. Check that one off the list!

I would have (and still might) bet my life savings that one of our previous banks offered to put a hold on a card when it was lost in case we were able to find it. I don’t mean to brag, but I have a fair amount of experience with losing such things and have had that conversation multiple times. This, of course, does not impress the bank staff much when they are trying to convince you that the only option is to cancel the cards altogether. On the off chance that our cards did get returned, I wanted to be able to use them! Alas, putting a hold on the card is apparently not a service that Wells Fargo offers, so all three cards were cancelled and new ones were scheduled to be sent to our billing address.

6. Figure Out How to Get Cash

Our biggest concern was that we had no way to access cash at a time when we were set to pay a hotel bill and burn through a few tanks of gas within the next 36 hours. We thought that our hotel would probably accept our credit card number without the card in hand, and we figured that if we combined all 7 of our remaining currencies, we could make it to our apartment in Medellín before running out of cash, but that was a gamble and not one that we were keen on making in a new foreign country. Another plan B could have been to stay in Cartagena on credit at the hotel until our cards came in, but that was probably going to be at least a few weeks, and we’d already paid for our Medellín apartment. What we actually decided to do was to send ourselves some money through Western Union’s website, using the number of our active debit card and collecting it in the centro the next day. That seemed pretty genius to us, but apparently it is a fake service that doesn’t actually exist, so we instead had to put our tails between our legs and ask someone in the states to physically go into a Western Union and send us the money. It was our walk of shame.

This really went quite smoothly for us, but did create a bit of frenzy on the other side with our last minute request. My totally awesome aunt and uncle who graciously bailed us out did so in a small window of time they had on their way to their son’s cross country meet (Woot Woot! Go Sam!). She later wrote to me, “I am pretty sure I just made the FBI watch list. Hurrying around to send money to Colombia. Dan jumped out of the car and ran across an intersection and parking lot to get started.” But guys, we got cash.

We’ve learned from experience that national mail is not the tried and true symbol of reliability in the parts of Latin America we’ve visited so far that it is in our home country. Our hostess in Medellín has recommended that we have our cards and licenses sent via FedEx, which is supposed to arrive quickly and assuredly, though expensively as well. All but one card has arrived at Ian’s mom’s house, and once it does, she is going to send everything our way. We’ll let you know if we have any trouble.

Huge shout out to Ian’s mom, Monet, and my aunt, Missy, who were incredibly instrumental in helping us to get back on track. Their involvement goes far beyond the small descriptions above, and we are crazy grateful to them both. Of course, not a single person in our extraordinary support system would have batted an eye at these requests, something that we credit largely for our ability to travel so freely. There’s no fear in jumping when you know so vehemently that your loved ones will always be there to catch your fall, and we thank you all you endlessly for simply being there.