Westside is the Bestside on the 4th of July

July 5th, 2012 | Posted by Brianna in Celebrations | The Places We've Been

Nobody does the 4th of July like Kansas City’s Westside.  It’s a combination of the quintessential patriotic block party with kids running from house to house and neighbors sharing beers, a summer evening in a Mexican-American barrio with Abuela on the front porch and Spanish music blaring into the street, and a blockbuster war scene with thick smoke abounding and unrelenting explosions of varying size and affect.  It is awe-inspiring.

The local police force had come by earlier in the day for a home-cooked meal, and the fire station at the end of the block is on hand if needed.  The brothers living on the street are entrenched in a friendly, but fierce competition over whose fireworks are most impressive – fireworks they’ve saved for since last July.  The youngest children are glued to Dad’s hip as they bravely light their first sparklers, and those just a few years older boldly carry around their punks and fearlessly produce the ground level show, covering the asphalt from curb to curb in a thick layer of paper and ash.  At the end of the evening, the street lights come back on and all hands on deck grab brooms and trash bags to return the street to its previous state.  It is joyous and beautiful and slightly terrifying, a celebration of the American dream that has become not only a family tradition, but an incredible neighborhood institution. 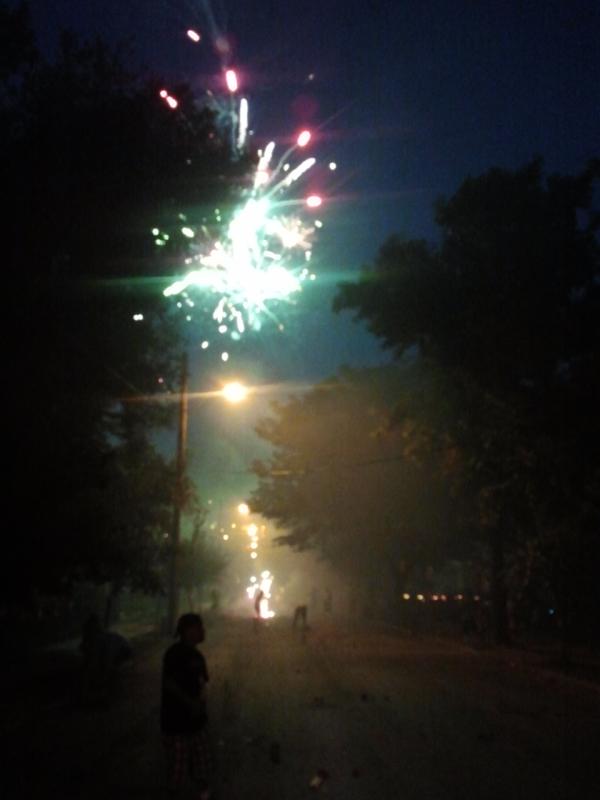