We are planning on visiting El Cajas National Park this week. About 20 miles east of Cuenca, El Cajas is a rugged landscape of peaks, valley, lakes, and alpine tundra set between 10,000 and 14,600 feet. Our research for the visit has brought to our attention the supposed existence of Ecuador’s own version of bigfoot.

According to various poorly sourced online references, the legend of Wawa Grande dates back at least 200 years. Taking its name from the Quichua word for baby (wawa) combined with the Spanish word for large (grande), Wawa Grande is a humanoid that walks on two legs or four, stands up to eight feet tall, weighs up to 400 pounds, and has thick, greyish, brownish, blackish, reddish, whitish fur.

In recent years, according to blog and news posts citing no names and including no photos, Wawa Grande has attacked a Scotsman and been photographed by two Brits and two Swedes, none of whom want to release their photographs due to aversion to publicity.

While I’m generally inclined to believe anything a Swede says…sounds like a freakin’ llama to me. 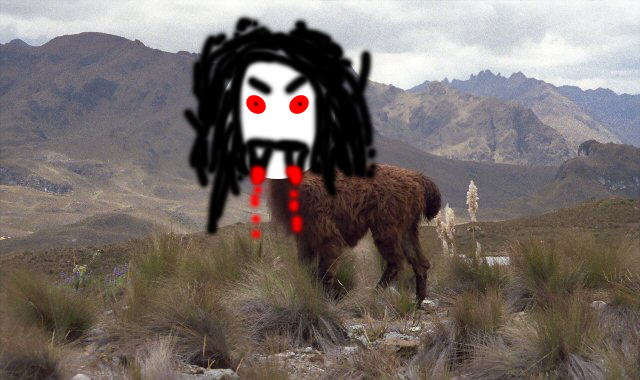 This image of the notorious Wawa Grande was released to us on the condition that the photographer remain anonymous.