We recently had our second set of visitors join us for a segment of our journey. My dad and stepmom, Randy and Jane, made the long trip south from the Kansas City winter to enjoy some Buenos Aires summertime. So exciting! Here is how our week went down. 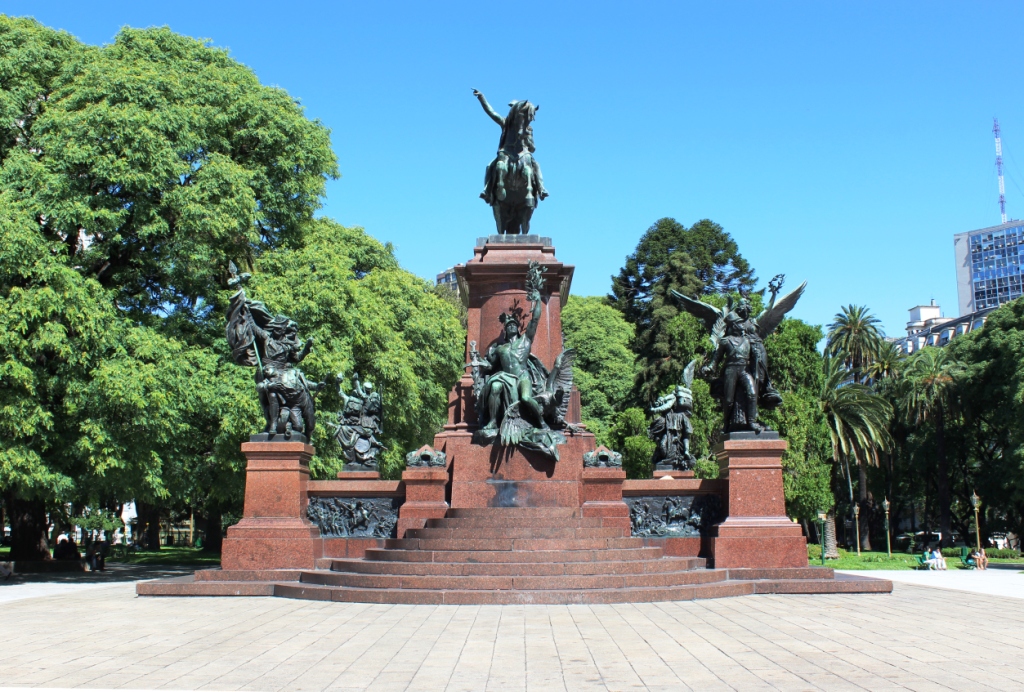 These people/deities represent something important, I'm just not sure what.

On Monday morning we checked the United Airlines website for their flight status. Two hours before they were supposed to land everything looked to be in order. The plane was nearly getting ready to cross the Bolivia-Argentina border and was on time. Then, for some odd reason, the flight status changed to cancelled. Thinking it was some kind of tracking or software problem we headed out to Ezeiza International Airport, twenty-five minutes and three toll booths away. When we got there and checked the “Arrivals” board, the flight wasn’t even on it. Hmmm…that is strange. Finally, Brianna asked at the information desk, where they informed us that yes indeed, the flight had been cancelled. Huh?

A couple hours later I got on the phone with Dad. Turns out they had made it somewhere close to Bogotá when the weather radar went out. While the passengers slept, the plane turned around and made its way back to Houston. It wasn’t until they were descending the next morning that anyone besides the crew had any idea they weren’t landing in Buenos Aires. They would have to take the same flight again later in the day. For those of you keeping score at home that means two consecutive nights of ten-hour international red-eye flights.

OH MY GAWD THEY FINALLY MADE IT!!! Trip number two to the airport was an astounding success. Our visitors had actually arrived. When they emerged, I was very impressed with how lightly they had packed. Only no. Their baggage was still in Houston. Great job United. Really stellar work on this one. Spirits were still high though. After all, they had made it to Buenos Aires.

Day number one was pretty low key. We hung around the apartment for awhile, cracking open a “Welcome” bottle of Malbec and catching up. After that it was dinner in nearby Plaza Dorrego, complete with tango dancers in the aisles.

For our first real day out in Buenos Aires, we rode the Subte north to Recoleta. From there we set out on foot. After stumbling across some magnificently giant trees and passing through a couple of parks, we stumbled upon… 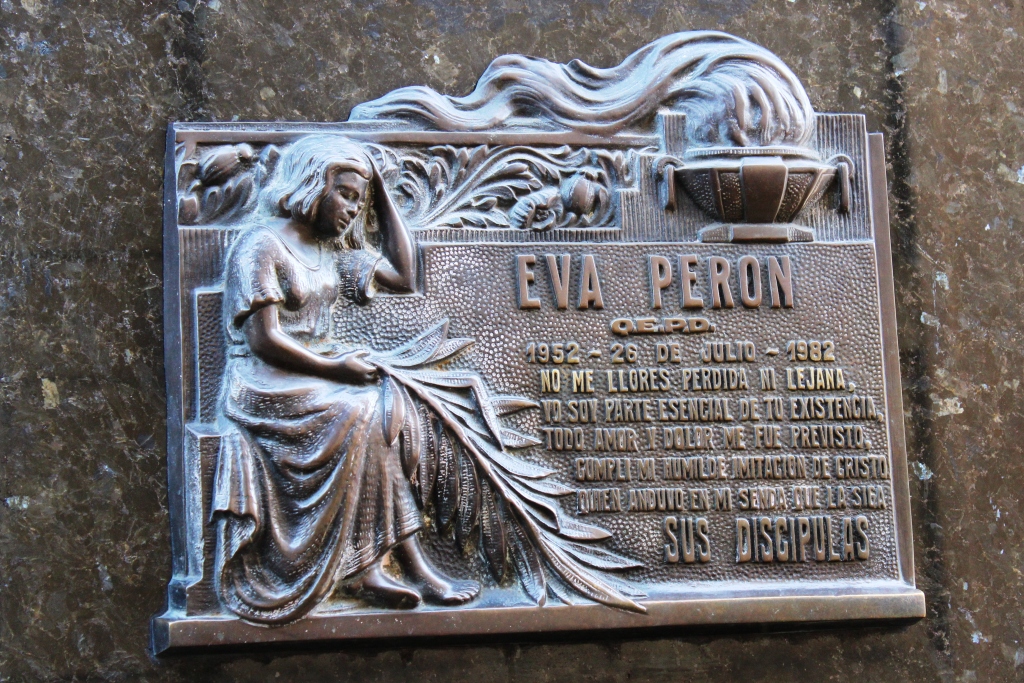 Recoleta Cemetery is, shockingly enough, located in the Buenos Aires neighborhood of Recoleta. First opened in 1822, a visit today commences by walking through a set of tall neo-classical gates. The cemetery’s 4,691 aboveground vaults are home to a veritable who’s who of Argentine dead people, including:

The real attraction, though, would have to be none other than María Eva Duarte de Perón, also known as Eva Perón, or affectionately as Evita. So, yeah, we saw Evita’s tomb.

Fires in the Street 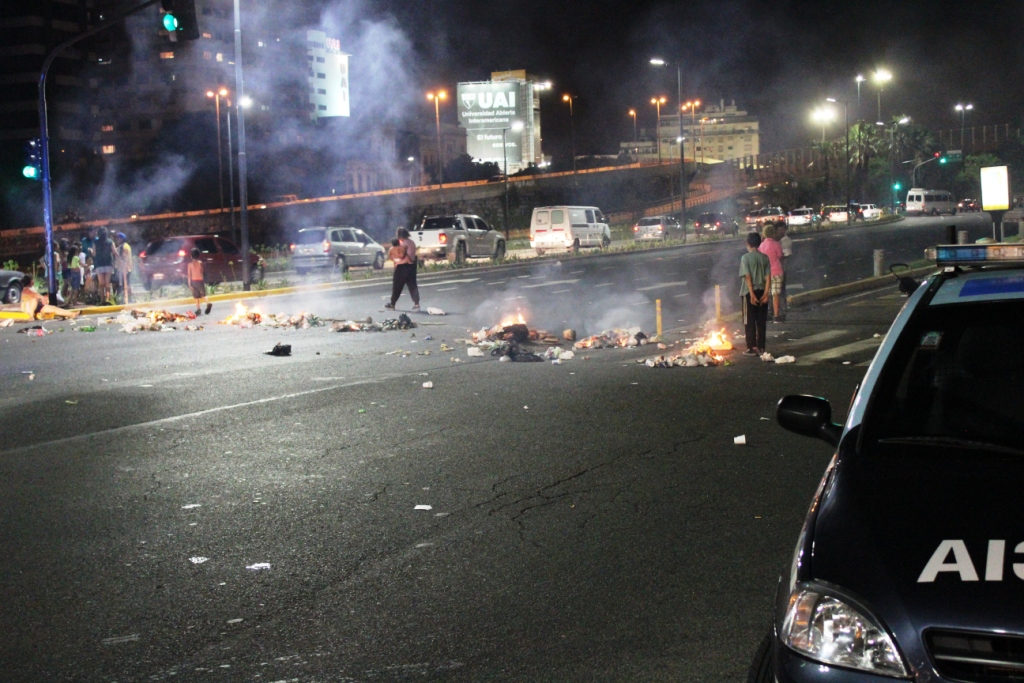 "Guys! They won't help us get electricity back! Our air conditioners don't work! What are we gonna do? Burn stuff!

One thing I can almost guarantee readers from the US take for granted is the almost complete lack of road blocks in our country. This is seemingly not a given in many places we have been through. Most of them aren’t intended to be malicious towards drivers, though occasionally blockers will set up unofficial toll booths. More often, roadblocks are used as a form of protest against the government. We have been tremendously lucky on our journey to have not been indefinitely sidetracked by any of these. The only substantial road block we have encountered was in central Bolivia, and it was remedied by an hour detour.

Climbing out of the Subte after our day out in Recoleta, we immediately noticed something on fire in the middle of Avenida 9 de Julio (the widest avenue in the world!). What seemed to be a contingent of several families was burning garbage and banging pots and pans across eight lanes of traffic. Police were on hand, but apparently only to observe and keep the peace. Hundreds of cars scrambled to adjust their route in the couple blocks leading up to the block, leading to some nasty congestion and a pretty serious case of the honks.

We found out later the reason for this demonstration. Apparently the Buenos Aires power grid has a tendency to struggle during the hottest parts of the summer. Our apartment, for example, has seen a couple of brownouts on the two 98+ degree days we have seen (it would have been nice if someone had told us they were coming and how long they would last). Anyway, it turns out that some parts of the city had been without power for multiple weeks, and the lack of response by either the local government or the energy company (or companies, I’m not really sure) is what spurred this flexing of garbage-burning muscles.

Thursday started with yet another trip to the airport. This time the lost baggage had finally arrived. Actually, it seems as though it might have been sitting in an office for the past day, but of course no one knew for sure. After that we decided to take in some sights a bit closer to our apartment. Puerto Madero and the Reserva are both within walking distance on San Telmo, so we sauntered on down in the late afternoon. 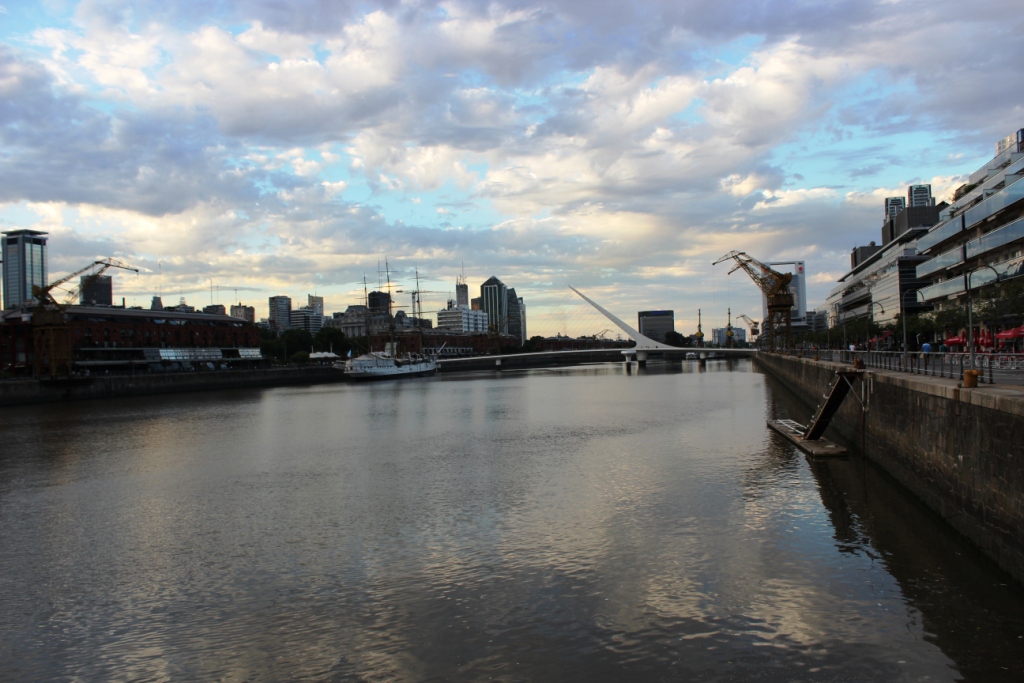 Built over a ten year span before opening in 1897, Puerto Madero was commissioned by the national government to be a fully functioning port. Due to the relative shallowness of the Rio de la Plata, ships previously had to anchor further out where passengers and cargo were transferred to barges and then brought to shore. Though initially a triumphant success, the appearance of ever-larger cargo ships made the port essentially obsolete within a decade. When a newer, more modern port opened in 1911, Puerto Madero slipped into decay, becoming a dodgy mix of warehouses and empty plots of land for the next 65 years.

In 1989, the city and federal governments agreed to make redevelopment of Puerto Madero a priority. By the early 90s, investment in the area had taken off. Warehouses were refurbished to make polished urban housing and commercial space, new high-rises sprung up overlooking the city to the east and the river to the west, and the entire road grid was rebuilt by the city. Today, new construction continues and it is one of the trendiest neighborhoods in the city.

Puerto Madero is an excellent place to just walk and relax (or rollerblade, if that is your thing), as we did on our way to and from the Reserva Ecológica Costanera Sur (see below). Suited professionals speedwalk from their lofts toward the city and back, tourists take pictures of the old wooden ships that now serve as museums, and local families stroll and eat ice cream. Both sides of the waterfront are lined with countless restaurants and cafes with views of the water.  Even if you don’t have much time or desire to do anything in particular, a stop at Puerto Madero to take in the panorama (I doubt there is anywhere in town where you can just plain see so far) is well worth the time. 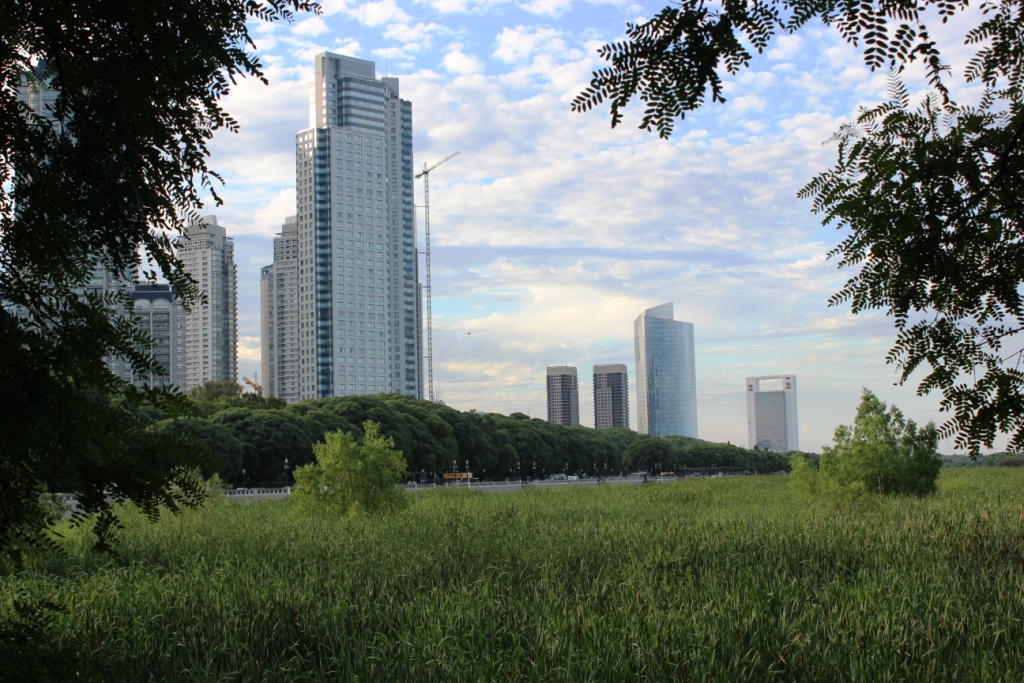 From Reserva Ecológica looking back towards the city

Just east of Puerto Madero lies the Reserva Ecológica Costanera Sur. Bordering the Rio de la Plata, the trails through its combination of marshy grasslands and ponds are a popular place for porteños to walk, jog, bike, and birdwatch. Oh, and it’s totally free.

After walking through Puerto Madero, we meandered into the park and made our way down to the river’s edge. The chatter of birds was never-ending, and we even saw some kind of lowland guinea pigs scurrying around.

We’ll call this one Palermo day. After another Subte ride, a stroll through some more large parks (they seem to just be everywhere here), and a couple chorizo dogs, we found ourselves at… 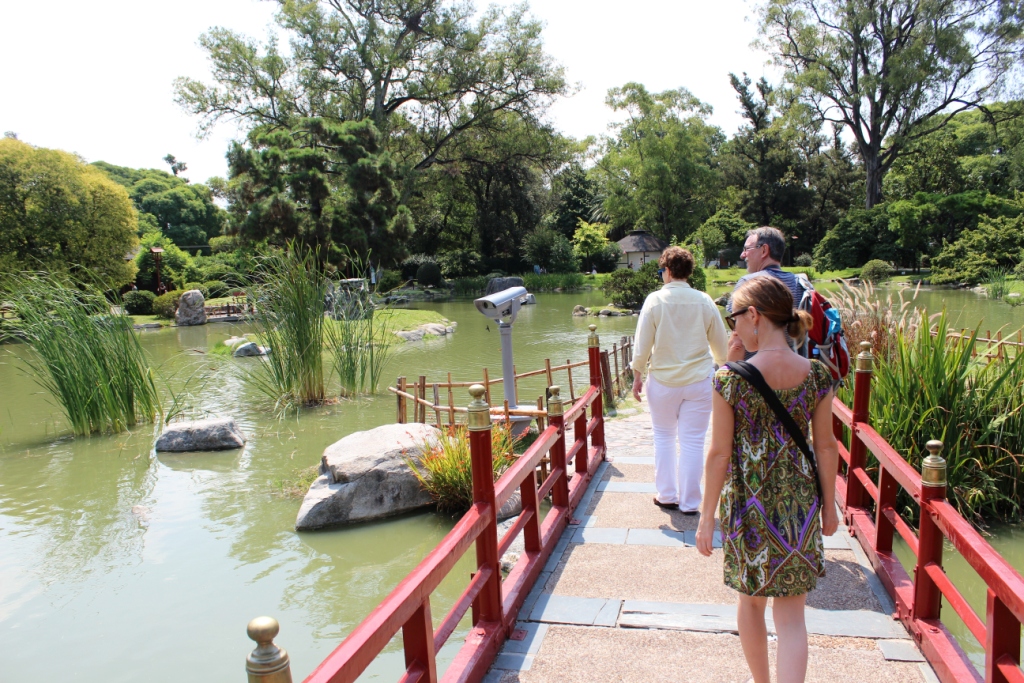 Buenos Aires’ Japanese Gardens (see the official name above) are pretty much what you would expect them to be. Centered around a large pond, the gardens combine Japanese trees and plants with those native to Argentina. Giant koi swim in the pond and wait to be fed, a greenhouse in one corner holds a collection of bonsai, a rose garden sits in another corner, and nearby high-rises tower over the serene setting. Entrance is thirty-two pesos as of writing (basically three dollars when we went, though exchange rates have been very volatile recently). All in all, it’s really a great place to relax or reflect or even just sit and slam some ice cream.

Called MALBA for short, the Museo de Arte Latinoamericano de Buenos Aires, has been open for about a dozen years and showcases the work of modern artists from throughout the Latin world, including lusophone countries. Entrance is forty pesos, though apparently it is half price on Wednesdays, and gets you access to all three floors of the museum. It’s not huge and can be seen with enough time for contemplation in an hour or two. 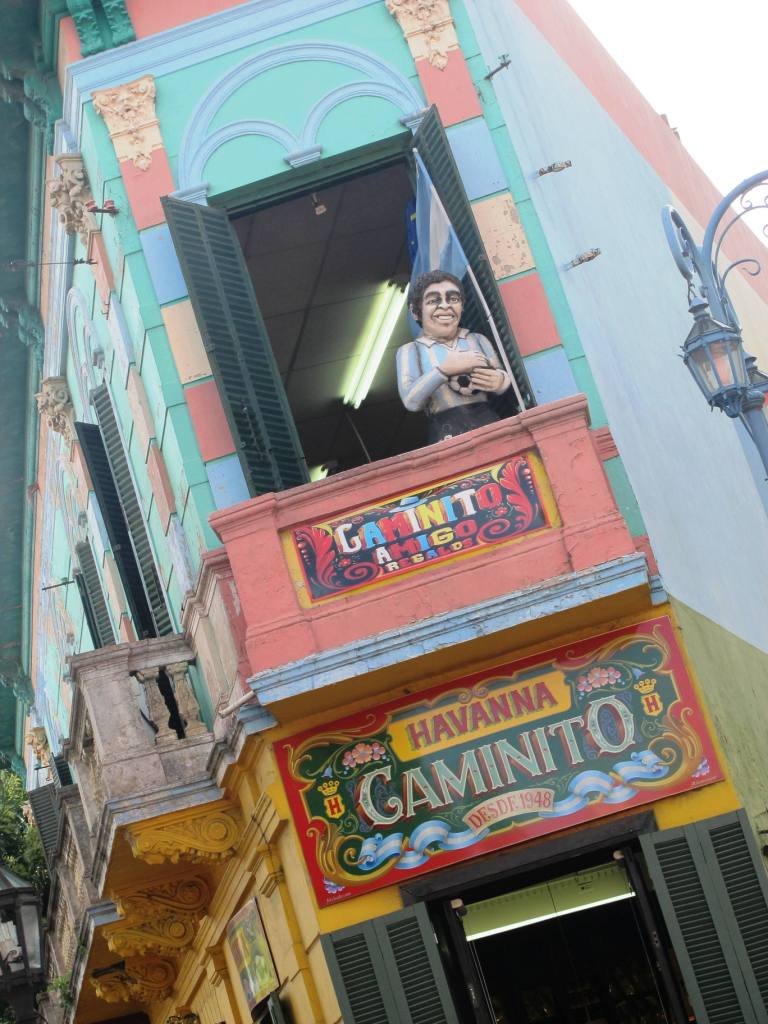 Located in the barrio of La Boca, Caminito is a traditional and colorful alley. Is it catered almost entirely to tourists? Yes. It is a bit more expensive than more low-key parts of the city? Yes. Does that subtract from its charm and feel-good vibes? Not in the least. An arts market was going on when we arrived, so we took some time to check out the many booths. After that we roamed the streets and did a bit of shopping – Dad finally got that hat he’d been looking for and Jane made away with a handful of bombillas. While enjoying a drink and a snack at a table in the cobblestone street, they even made a new friend who was born and raised right in the neighborhood. I don’t know if the beer aided or impaired his English, but he was definitely a good sport.

As the sun started to set we took a cab to a restaurant in Dad’s guide book called El Obrero. It was supposed to be a bit off the beaten path and quite authentic. Naturally, the place was shuttered. Why we thought we would be able to get dinner at 7:30 in the evening I do not know.

When it comes to things for visitors to do on Sunday in San Telmo, there is really only one option… 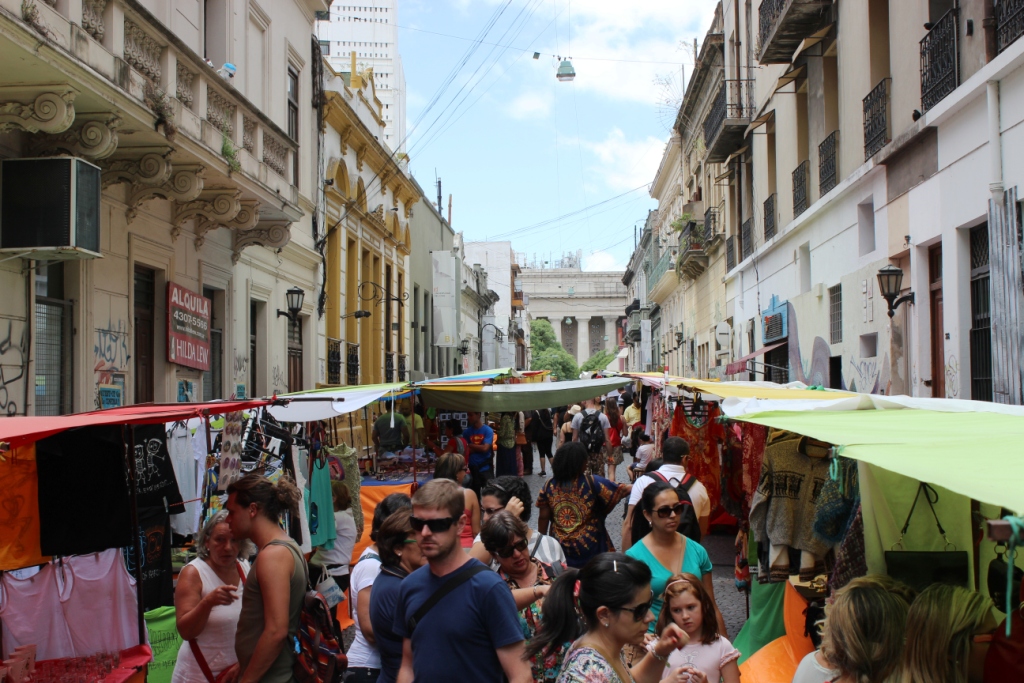 Every Sunday, Plaza Dorrego and Defensa (a street) fill up with hundreds of vendors selling art, antiques, souvenirs, and just about any other kind of thing you can imagine. Pairs dance tango in the plaza, buskers fill the market with their music, and there is even a marionette show in one spot. It’s organized chaos, but it’s also a must do if you’ve got a free Sunday. We walked and shopped. I even got in on the shopping this time (two words – sloth shirt).

And then it was all over. Dad and Jane packed up their things and we hung around the rest of the afternoon and evening. Our fourth trip to the airport was the final one. We saw them off, not exactly jealous of a ten-hour overnight flight, but so glad they endured three(!) of them to come see us in South America. It was truly a week of good food, good wine, and good company. Thanks again! 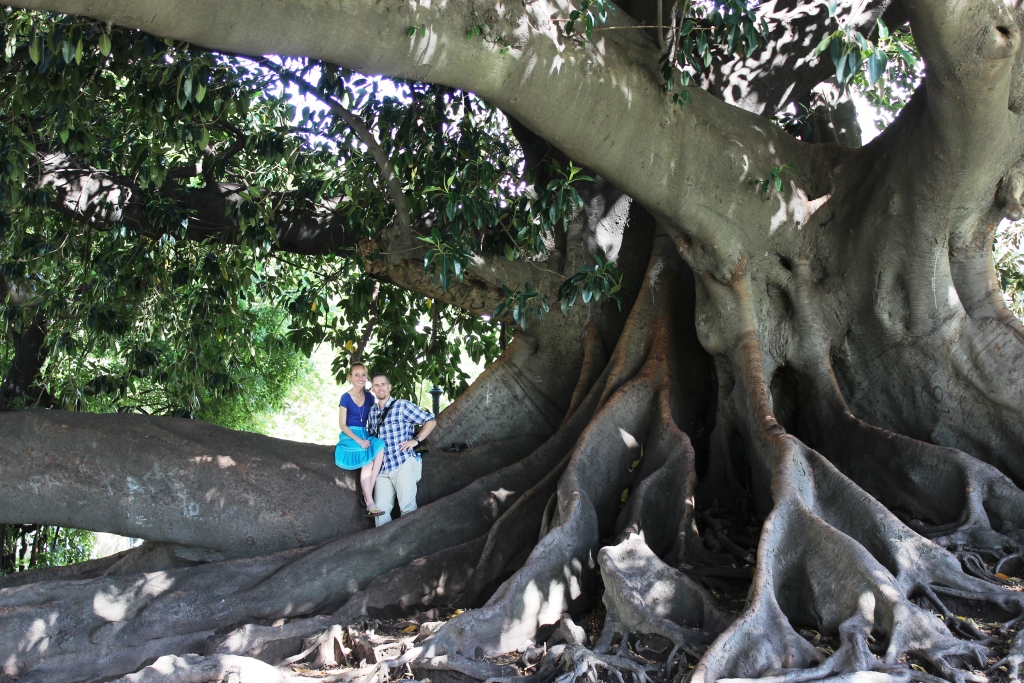 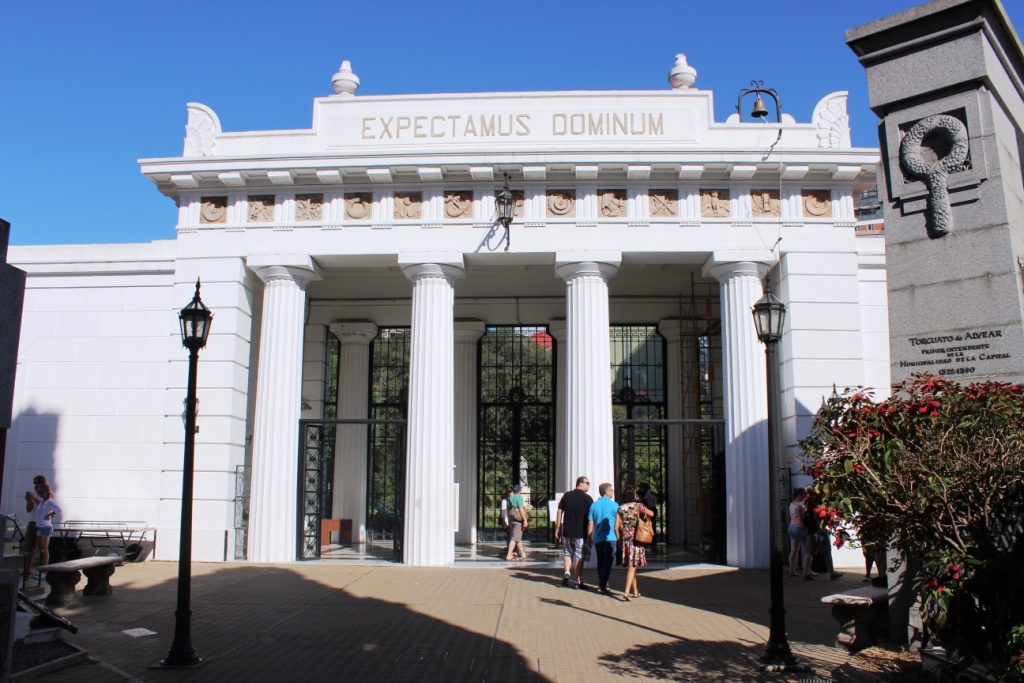 The entrance to Recoleta Cemetery 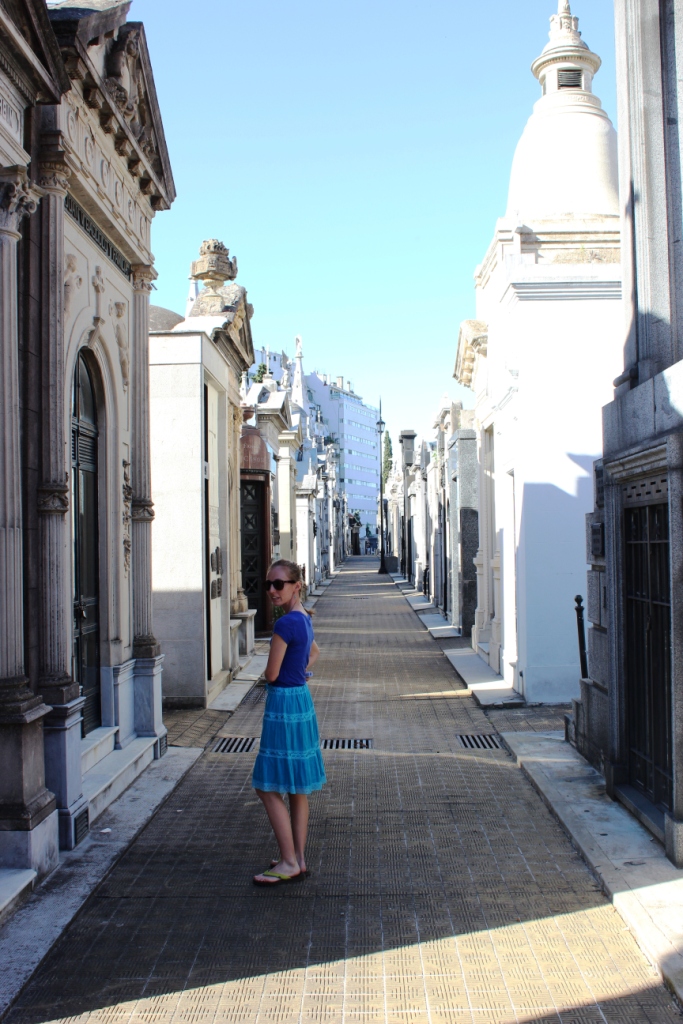 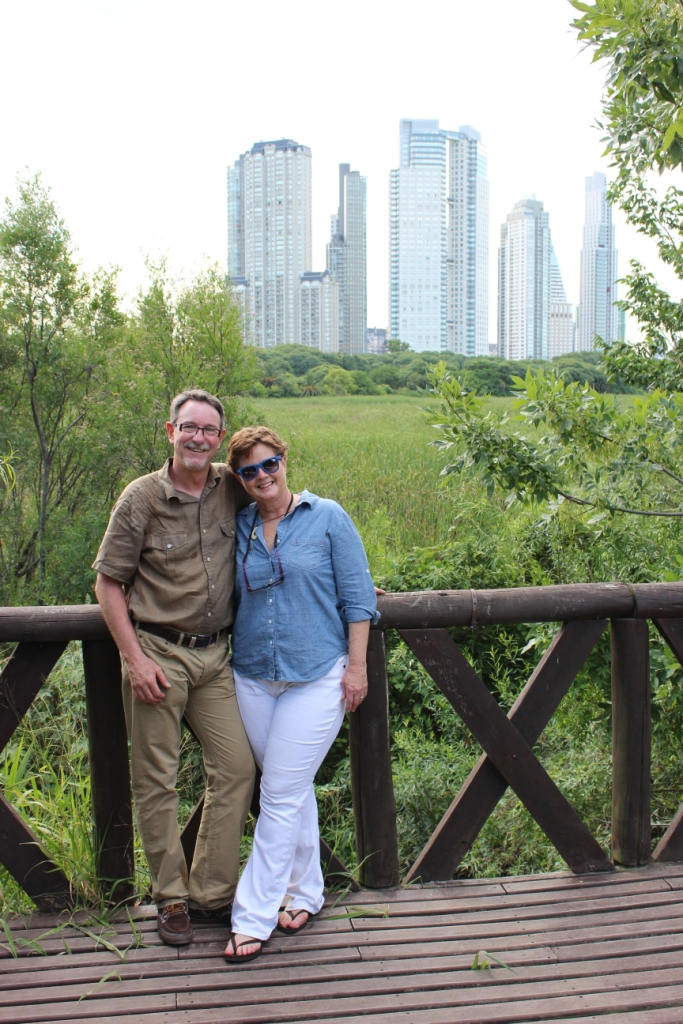 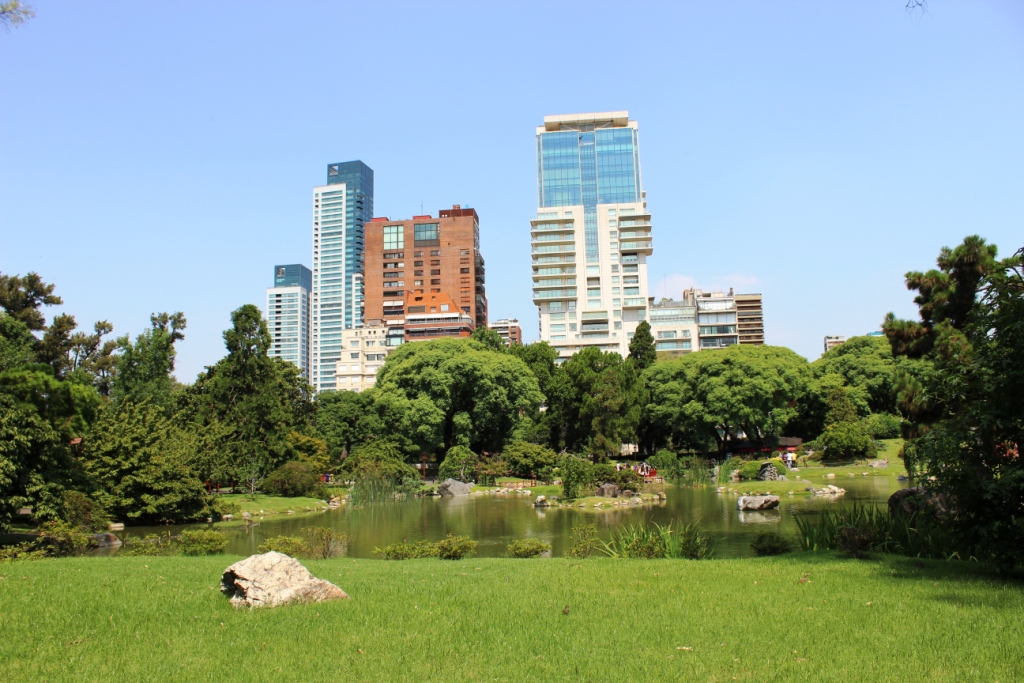 From the Japanese Gardens 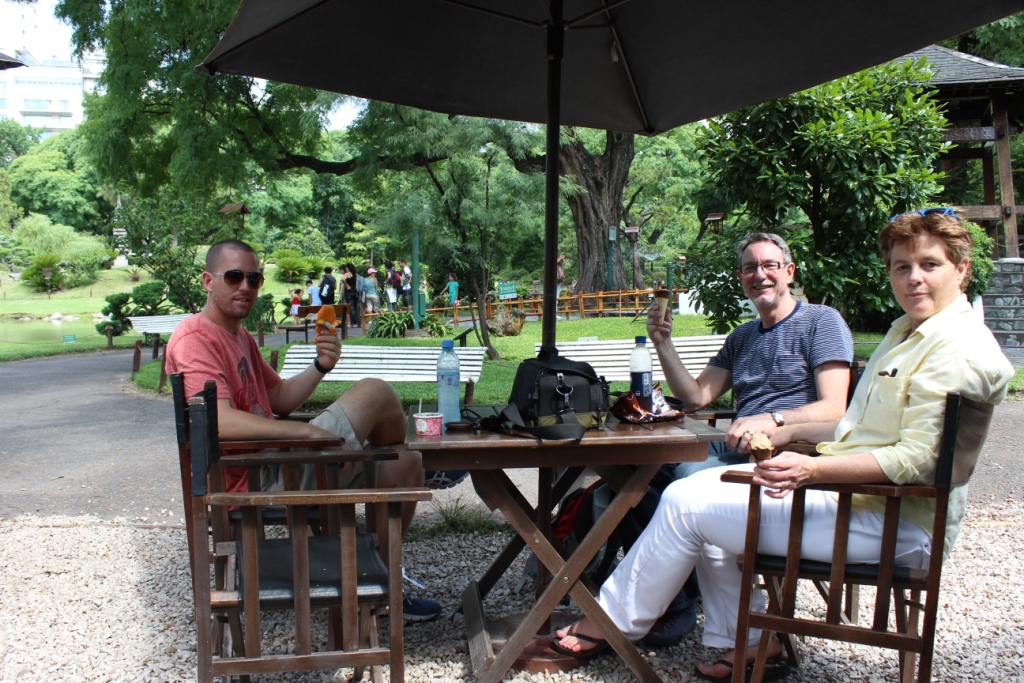 Killing some ice cream in the Japanese Gardens 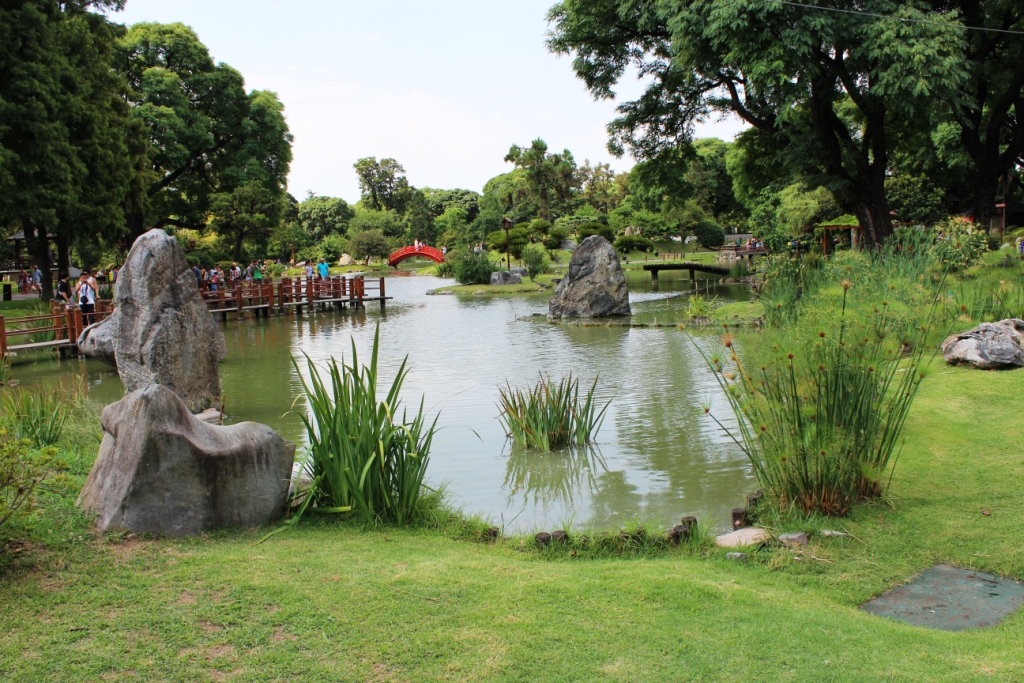 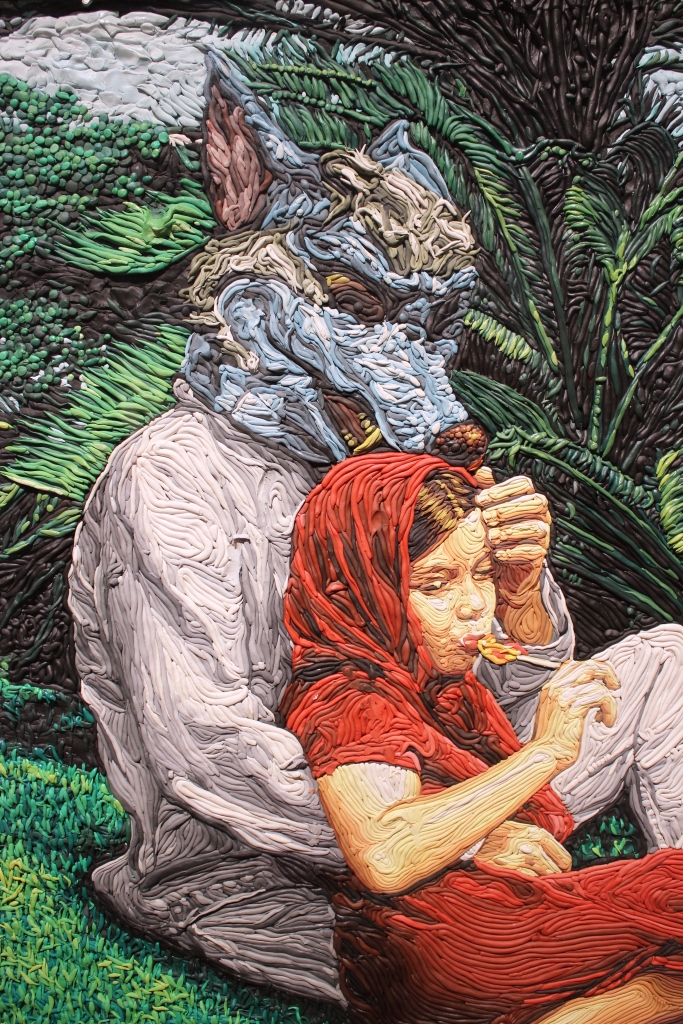 From MALBA -- This piece is made from thousands of tiny hand-rolled pieces of clay. 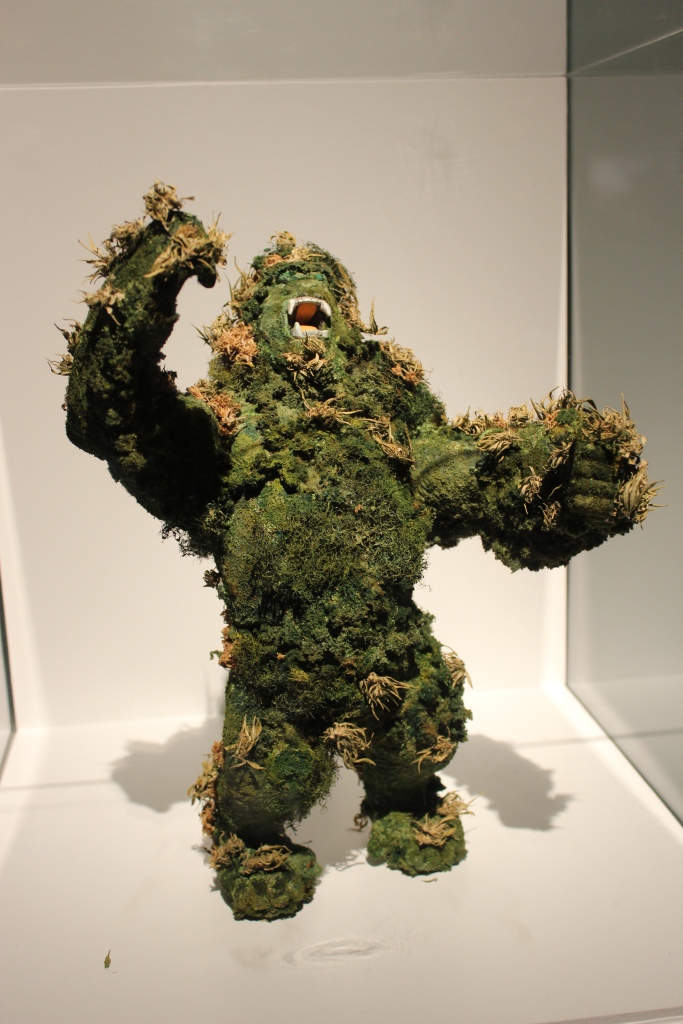 From MALBA -- This guy is made entirely from marijuana buds 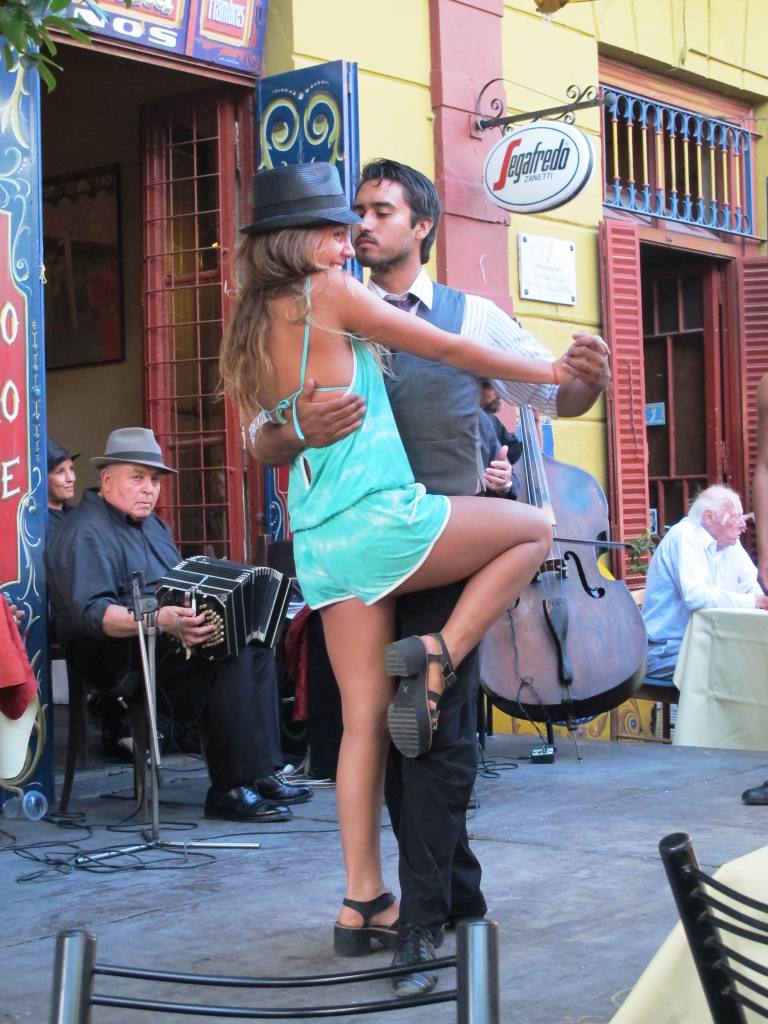 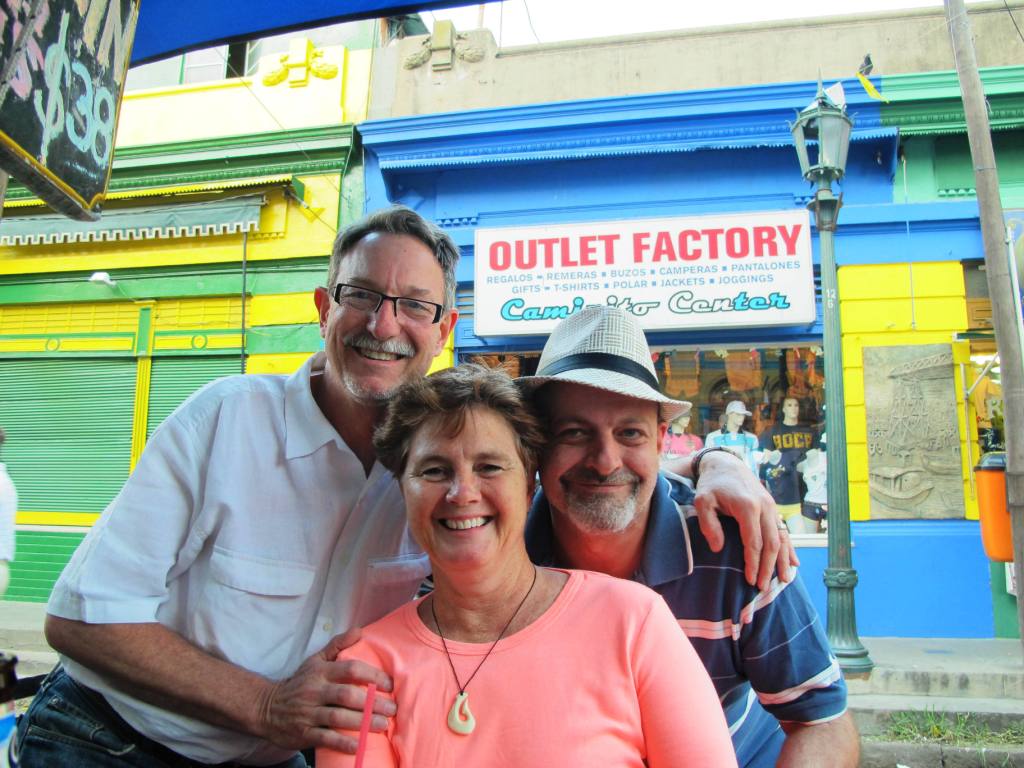 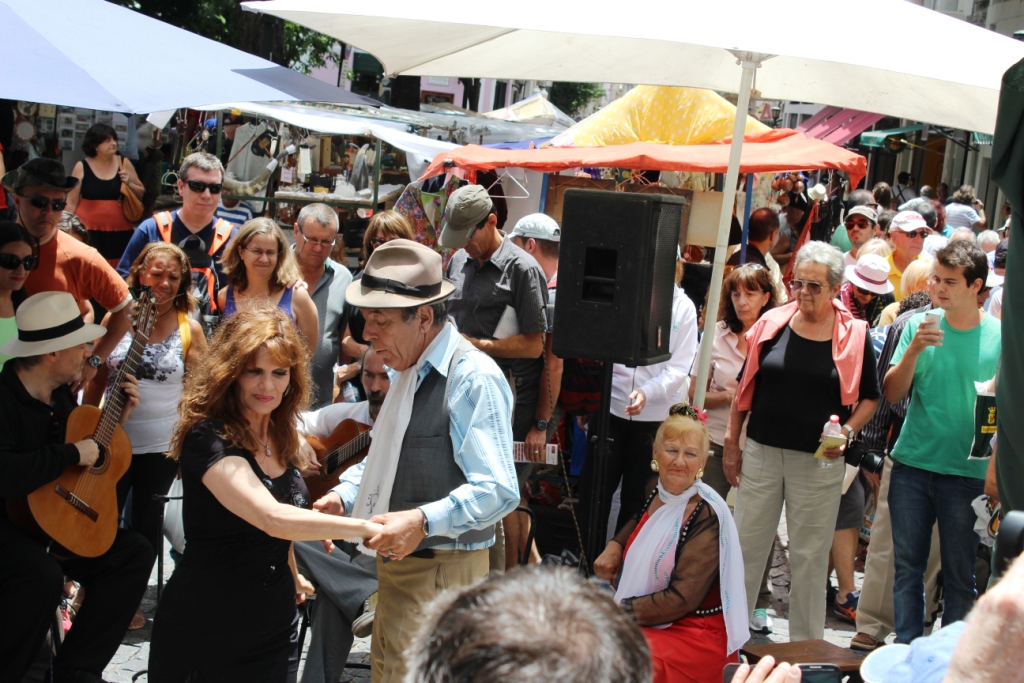 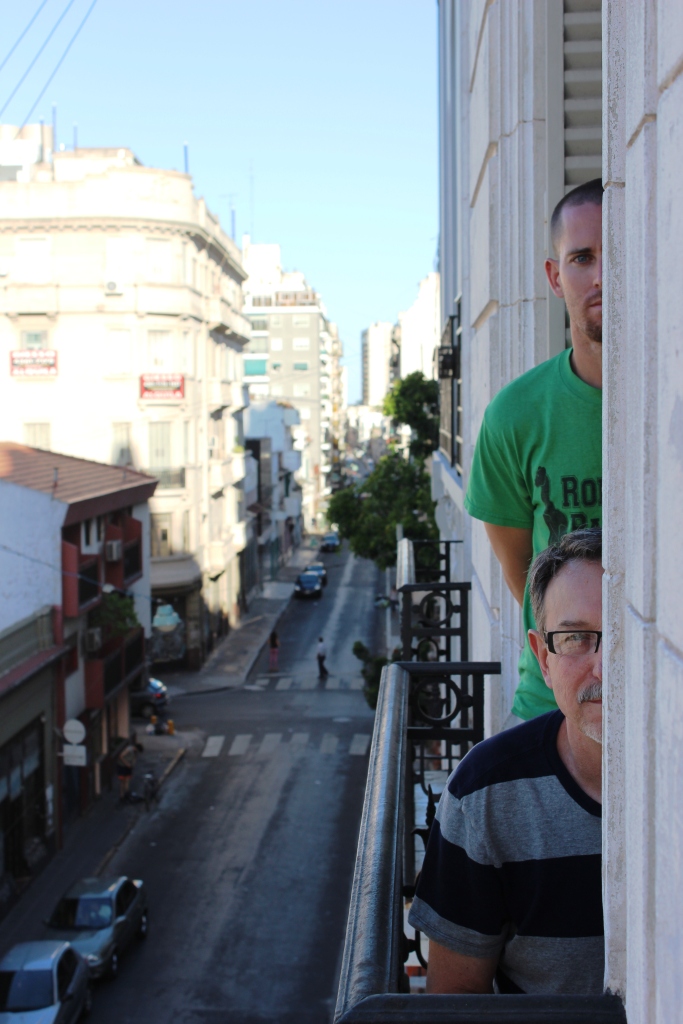