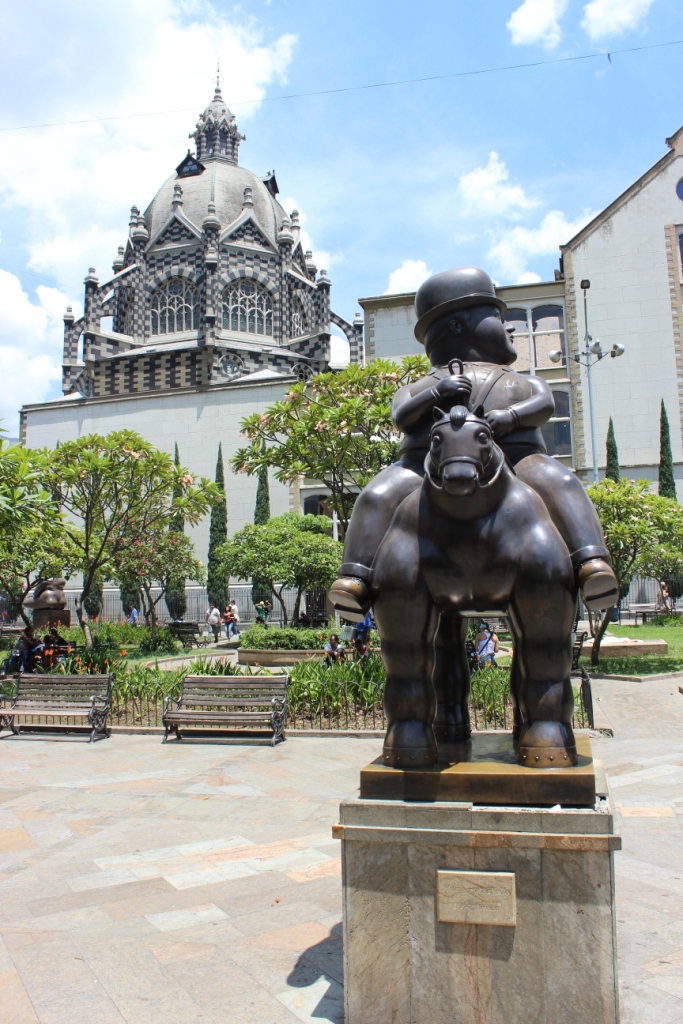 Fernando Botero's "Hombre a caballo" with el Palacio de la Cultura in the background. This park and these sculptures really do deserve their own post.

Our first metro ride in Medellín took us north through the center of town before dropping us to catch a connection on a cable car to Biblioteca España. Aside from our neighborhood, we hadn’t seen much of the city in the daylight before and one stop after another we found ourselves excitedly getting each other’s attention to point out interesting sites as we rolled past. There were magnificent churches and premium soccer complexes, crowd-filled streets amid centers of commerce and striking buildings we couldn’t identify. Around it all were fantastic views of the mountains surrounding the valley and the structures of the city climbing up them. Before we’d even reached our stop we had plans to spend the next Saturday exploring the town’s centro.

Downtown Medellín certainly has its allures: street food, activity, art, shopping (if that’s your thing), museums, churches, people watching, etc. It feels like a place where things might happen, where people are, and we had a fun few hours walking around and taking it all in. By lunchtime though, we found ourselves in a second story restaurant looking down at the crowds flowing slowly through a small courtyard and neither of us wanted to go back into them. It was fine. It was interesting. We’re glad we went to check it out. We also just found it to be a bit much, and we were ready to head back by early afternoon. Because of that, I’m going to do a huge disservice to a neighborhood full of things to talk about, and choose not to write about most of them. Instead, here are three random things that I am excited to share about our day downtown. 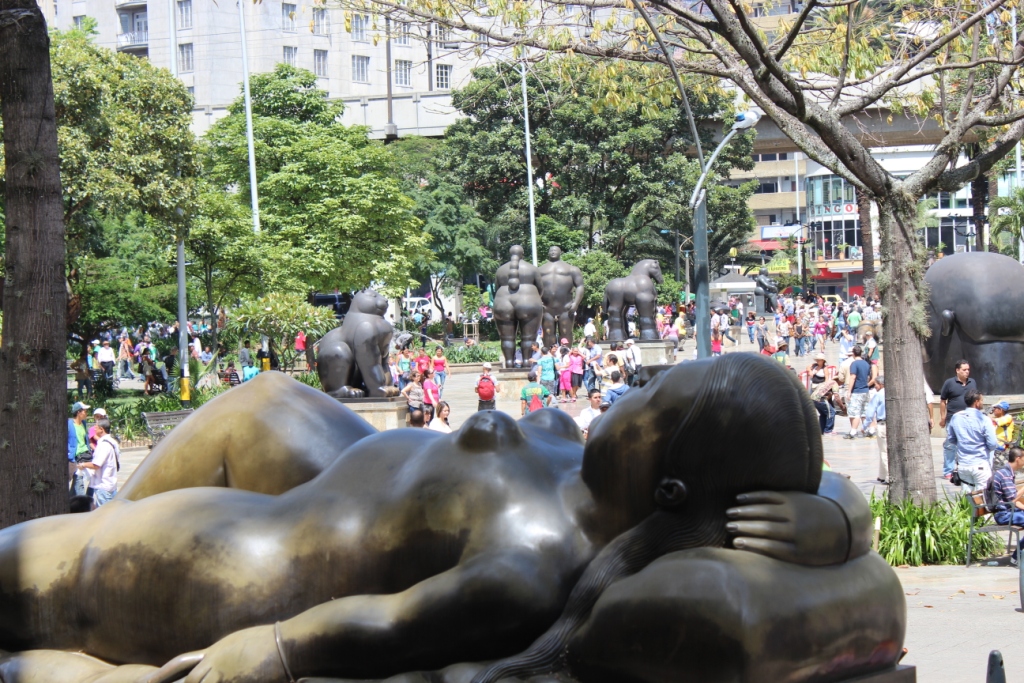 So many people... Quick, hide behind the giant naked lady!

Perhaps they are simple pleasures, but these two street beverages are delicious, and I just so happen to recall the fun of purchasing and enjoying them as a highlight of the day. We’d become accustomed to street coffee in Cartagena, but in our neighborhood it is not nearly the staple that it was there and is in downtown Medellín, much to our dismay. Generally, Colombian coffee vendors have a handheld box (similar to an old wooden tool box) or a small cart with a few thermoses and a stack of small disposable cups. The choice is tinto (black) or con leche (with milk), but all of the coffee is already brewed with sugar. A 4oz cup usually costs around 500 pesos ($.25 USD). In Cartagena we could count on crossing paths with a vendor at nearly every street corner and at any hour of the day or night. Until our trip to the centro though, we hadn’t had the pleasure yet in Medellín, and so we were thrilled to be back amidst the coffee salesmen and laughed heartily when the gentleman pouring us each a cup started poking fun at how Mexicans drink their coffee.

Unlike the coffee, guarapo was a new treat for us. Sold on the street in dozens of colorful flavors for 1,000 pesos ($.50 USD) each, guarapo is sugarcane juice, often made at the cart itself with fresh sugar cane and a hand-cranked (or sometimes electric) mill. Salesmen carry pre-poured cups through the streets while the carts themselves are more likely to be spotted near one of the concrete parques of the centro. Naturally, the bright and vivid treat in oranges and yellows and pinks and greens caught my eye, and when I finally stopped to ask for a cup, the wonderful woman I was purchasing from gave me samples of each flavor before filling me to the brim and sending me happily on my way. Oh sweet deliciousness. 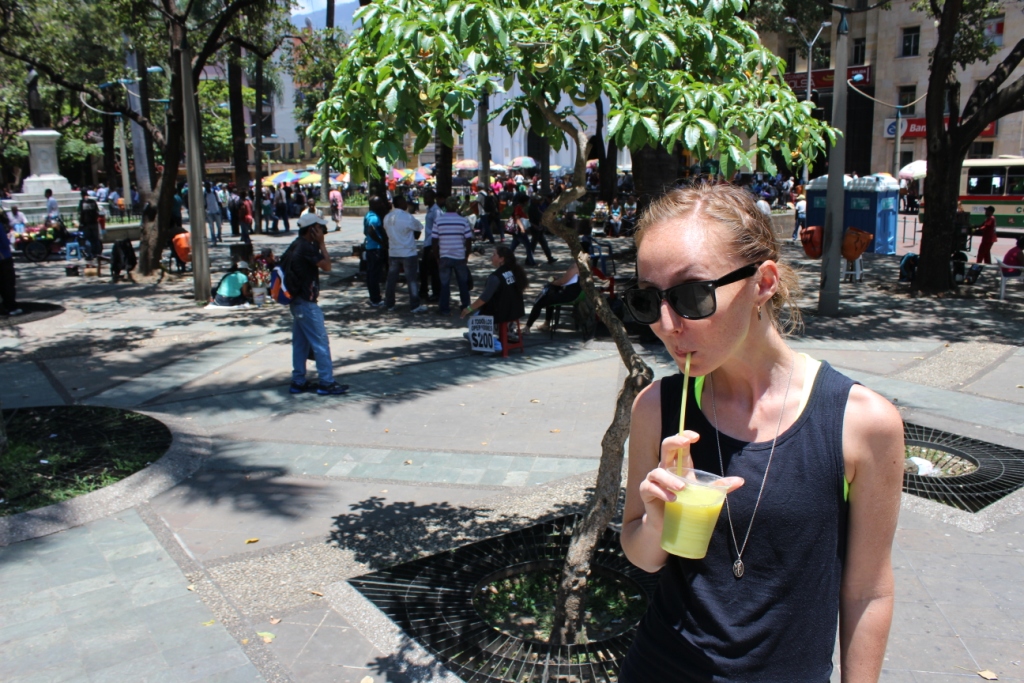 Enjoying my guarapo limón in Parque Berrío. Note the pay phone lady behind me.

Since we arrived in Colombia we have seen many signs indicating purchasable mobile minutes from an individual sitting near said sign. I hadn’t thought much of it before; we’ve seem innumerable items sold on the street in the past few months, some practical, some innovative, some puppies, and I just assumed that these were calling cards for sale or perhaps rechargeable cell phones. During our day downtown though, we realized that these signs actually advertise what I can only describe as human phone booths. What a concept! I’m not sure about the business side of the equation or what company provides all of these salespeople with matching signs, but the actual exchange is quite interesting. The person selling the minutes has a number of cell phones with strings attached to them that a customer can pay to use. The customer stands nearby, attached by string to the vendor, and places their call as though they had just borrowed a friend’s cell phone. Some vendors even wear vests with 6-8 pockets on the front, keeping the inventory well organized and providing a handy spot to attach the connecting strings. At one point, while enjoying our coffees, one young man stood with 4 different customers around him chatting away on cell phones. I found it quite an interesting service. Perhaps this happens many places and is just new to me? 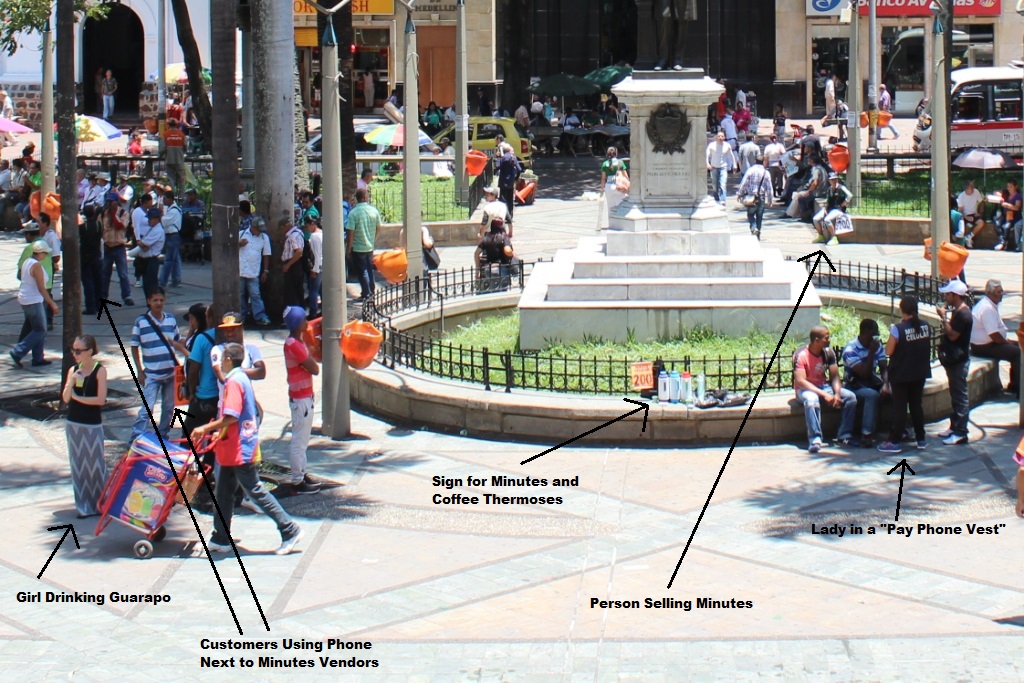 A labeled snapshot of Parque Berrío

We were starting to feel a little bit cramped for space when we stopped in the shade outside what we would soon realize was a museum. After a few minutes we decided to check it out and found it to be a detour that provided not only a nice refuge from the sun and the crowds, but also some really impressive and thought-provoking installations. My two favorites were a small tree and a large video. The tree was connected by practically invisible threads to a series of mechanisms that made it move almost unnoticeably, but in a remarkably natural way, as though it was alive and enjoying the gentlest of breezes. The large video was a view of a valley between lush mountains, not dissimilar to what I would imagine Medellín would look like if all of the buildings disappeared, projected onto the entire wall of a dark room, empty except for a single bench against the opposite wall. Like the tree, the video appeared to be still at first glance, perhaps a photo even, but after sitting for a short while, small changes became evident in the clouds and the sky and the vegetation. Both works had me completely captivated, and I must think that my appreciation for them had to be rooted in the dynamic noise just outside the walls of the museum.

As a whole, we were very impressed with the Museo de Antioquia, an attraction that we had no previous knowledge of or plans to see. The building itself combined classical and modern elements, and its multiple open courtyards gave it a very airy feel. In almost every room we felt as though we saw something we hadn’t seen before, a different perspective or style or art form or talent. It was really neat. Ian’s favorite room (he didn’t give it that title, I did) was also a video, but with a darker and more maniacal vibe. The paint from the black walls was splayed without care around the edges of the screen  (you know, that on purpose, completely planned, artsy kind of “without care”). When the video was bright enough, the viewer suddenly realized that old boards, pieces of metal, and other building materials were spilling towards them as though a tornado had left them there as a sad and destructive surprise. It was different and unexpected and wonderful. 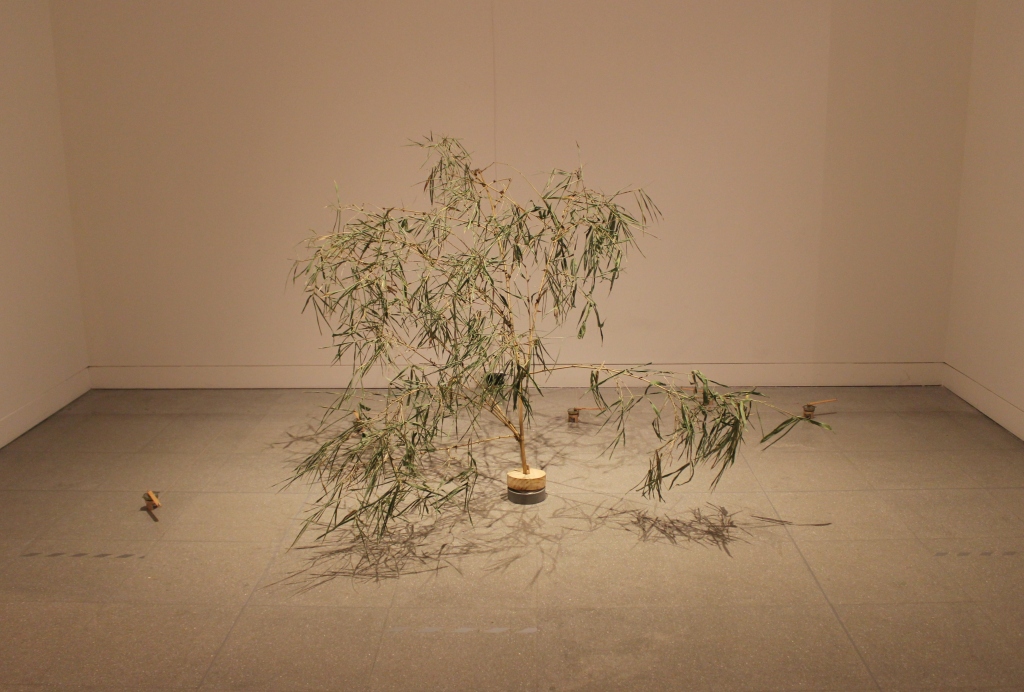 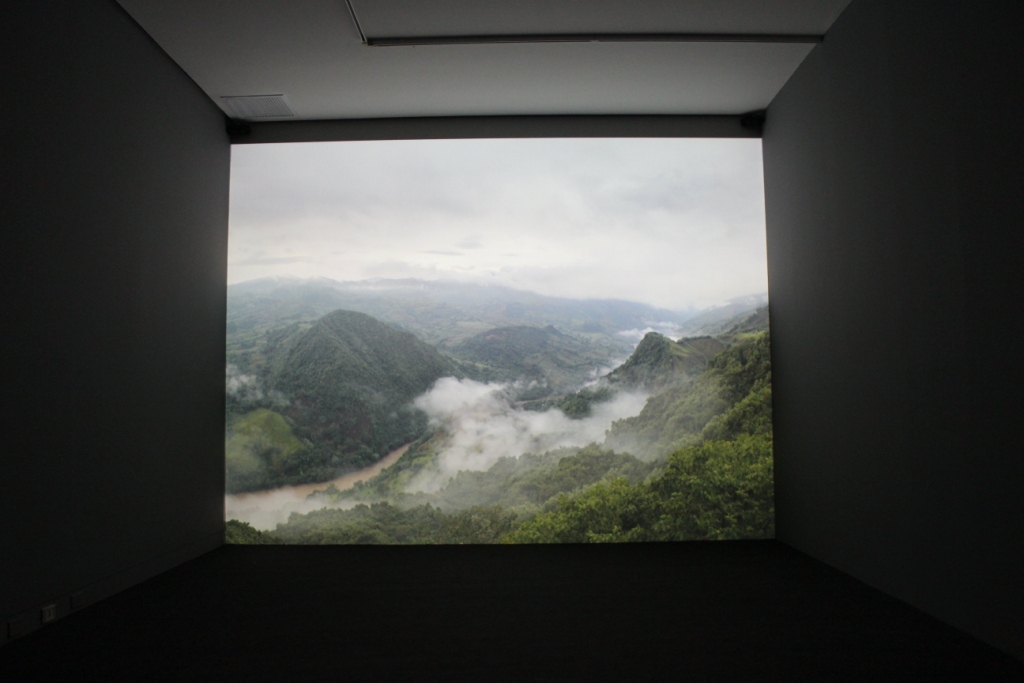 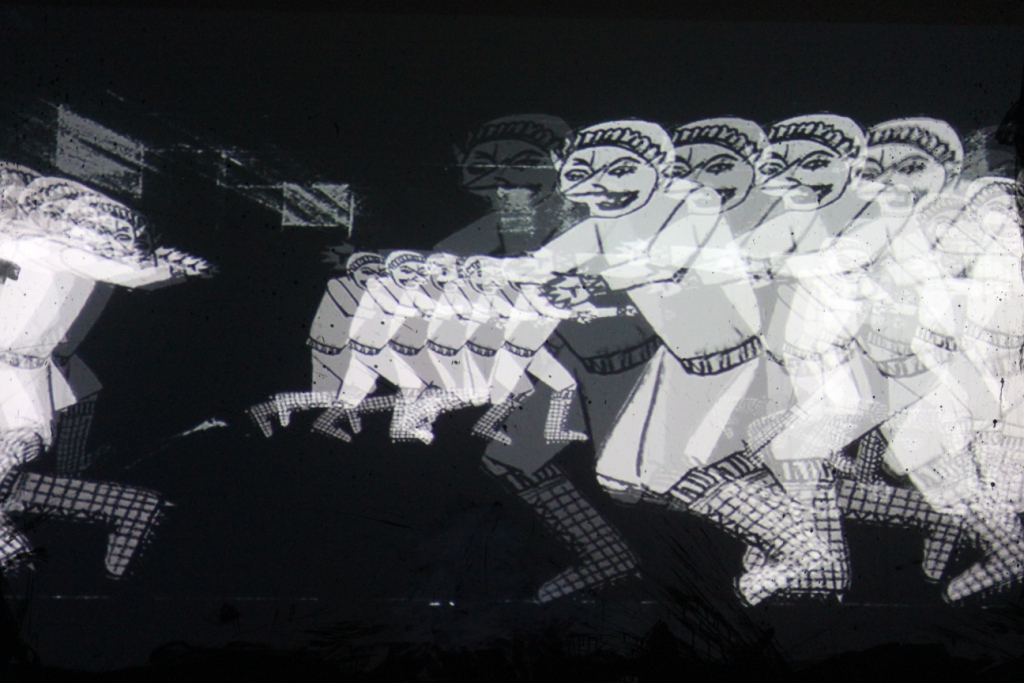 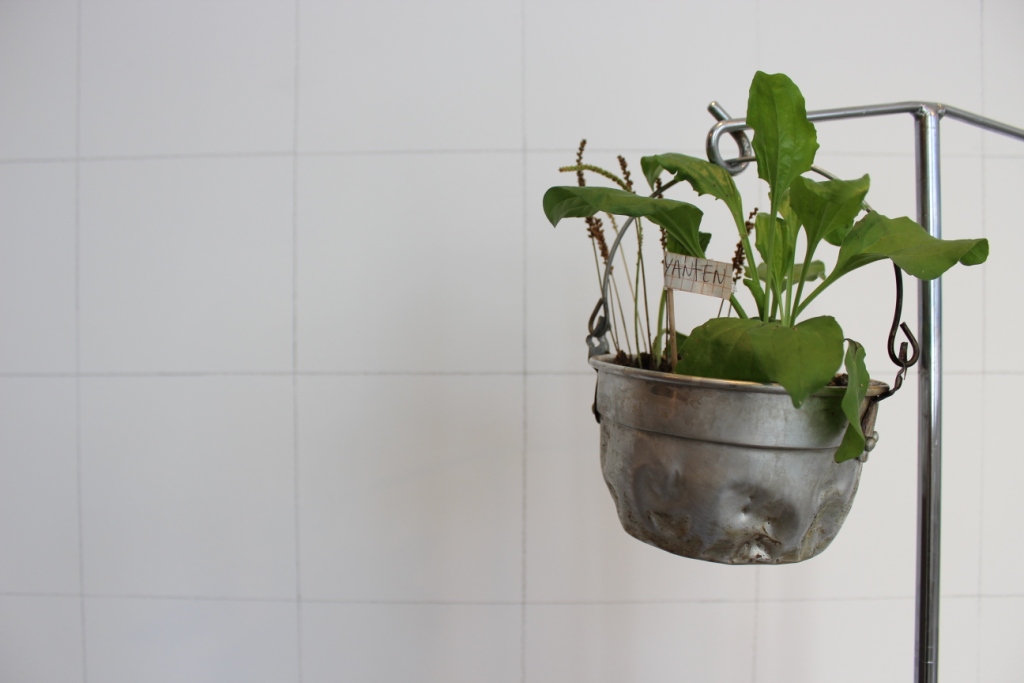 I just really like this picture. It's from an unmentioned exhibit about plants as medicine.