The Panama Canal and the Miraflores Locks

I remember hearing years ago that the Panama Canal wasn’t worth visiting because it was just some boat going slowly through a passageway, and there was really nothing more to see. From Kansas in the early 2000s, that made sense enough to me to dismiss any potential excitement about the place, an easy acceptance and lack of amazement that in general isn’t all that strange for my generation. Indeed the canal’s Miraflores Locks we visited last weekend were not fast or flashy; they weren’t exotic or breathtaking. Ian and I were born into an age when flashy and exotic are often the characteristics through which we decide if something merits a bit of attention and a time when hundred story buildings and trips to the moon don’t even make the front page anymore. But guys, this canal…

If, for even a few seconds, you can put yourself in the jungles of Panama during the rainy season of the 19th century before any digging had begun, before Yellow Fever was all but eradicated, before the marvels of modern day engineering became a standard part of our daily lives, if you can imagine gazing out with shovel and pickax in hand at miles and miles of densely vegetated foreign soil and trying to grasp how you might possibly split it in two to allow the ocean and the vessels that traverse it to flow freely through the divided land masses, then I think you too would be in awe at the crazy kind of awesomeness that the fact that such a passageway even exists, let alone that it has been operating for 99 years this month, inspires in me. It is outrageous and mind-blowing. And I haven’t even started in on the momentous historic collaborations preceding the construction and subsequent results on global relations that weave their way into an integral part of both our pasts and our futures.

In all fairness, I only recently got ridiculously excited about a canal that has been around my entire life. Knowing we were headed to Panama, I bought and read David McCullough’s The Path Between the Seas. My grandpa got me started on the author a few years ago, and while he was less impressed with this work than some of McCullough’s others, I still really enjoyed it. The book was written in 1978, almost concurrent with the Torrijos-Carter Treaties that gave control of the Canal Zone back to Panama in 1999, and thus in my opinion, is only lacking in its ability to predict the future. I was tempted to try to share some of the statistics and stories that captivated me in order to construct a single blog length history of the canal, but I don’t think that would have been possible in this space. I’m not sure it’s really necessary either, considering the endless, more reliable resources available. If you’re interested in learning more, I would recommend checking out the above book, reading about the canal on Wikipedia, reviewing this canal map, spending some time on the canal’s official website,  learning about current expansion projects, perusing this National Geographic photo archive, and/or watching this PBS film. What I will offer you here is a photo account of a giant ship passing through the Miraflores locks northwest of the city. It was pretty dang sweet. 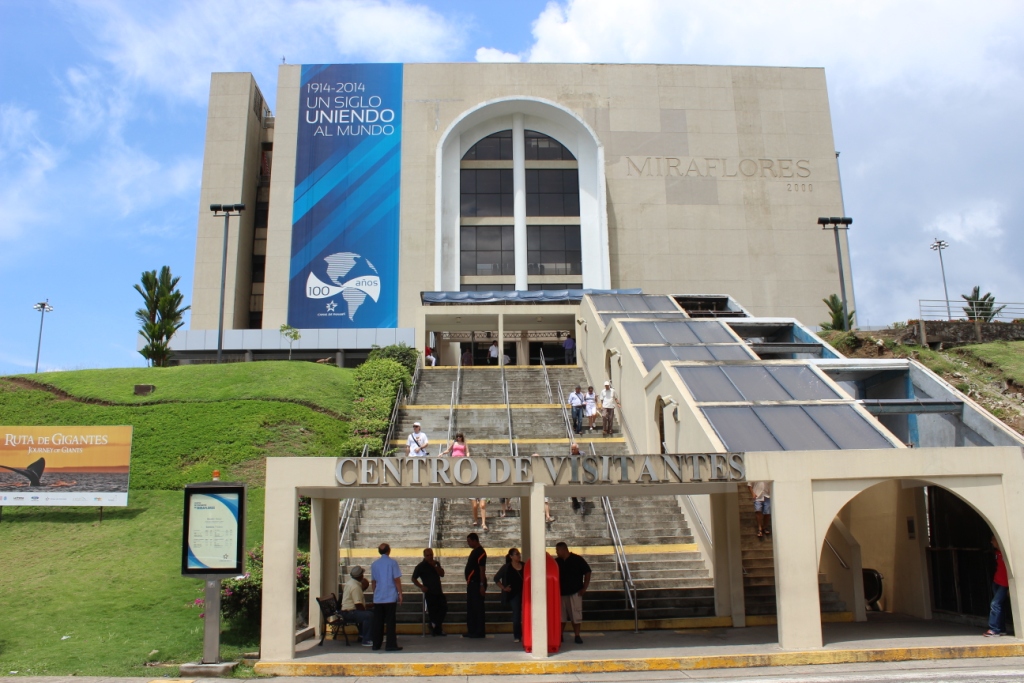 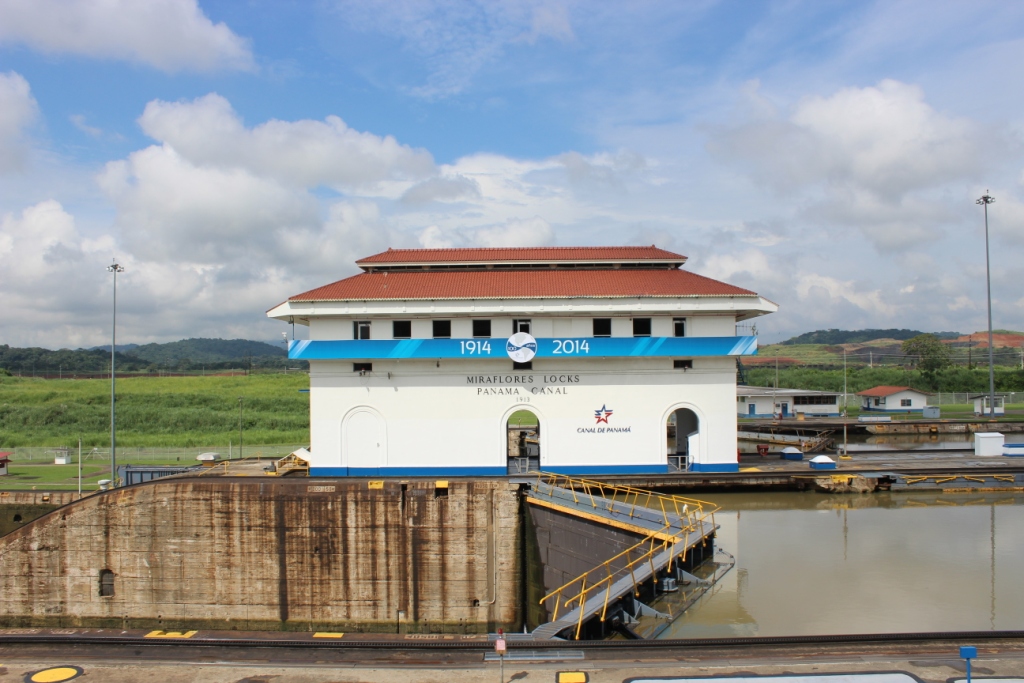 The view of a Miraflores Lock from the Visitors Center 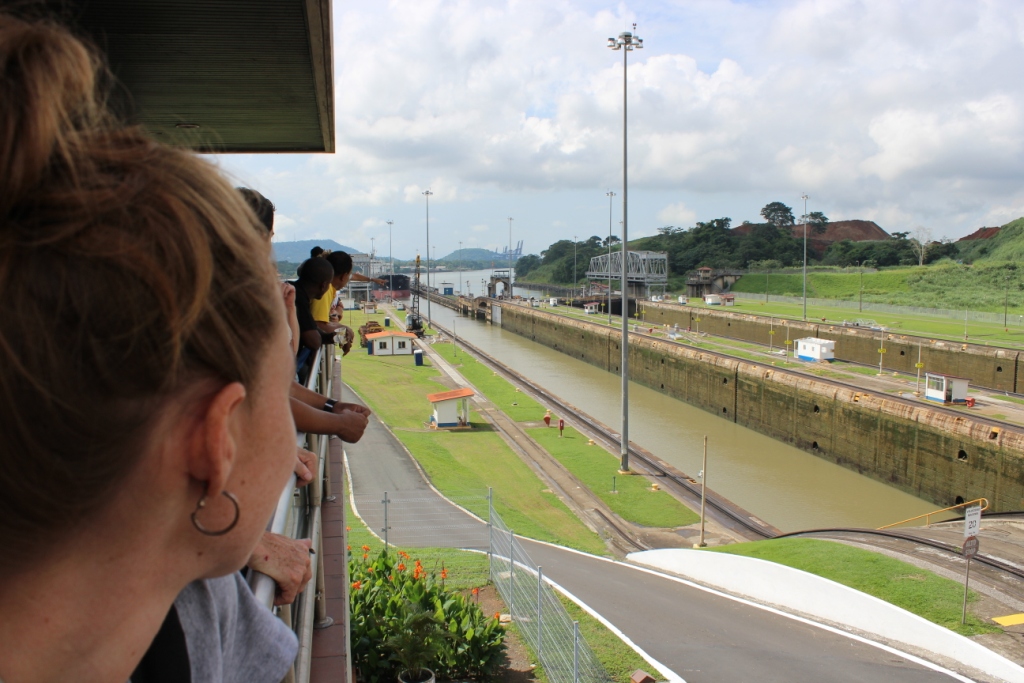 A ship enters the lock system 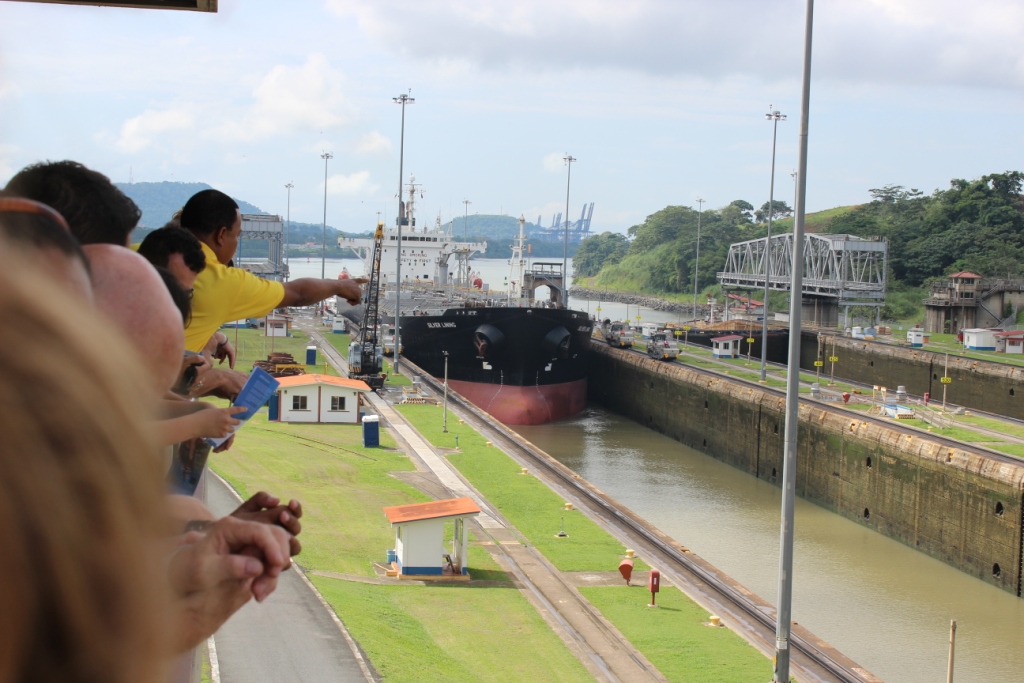 Here it comes, slowly and controlled. 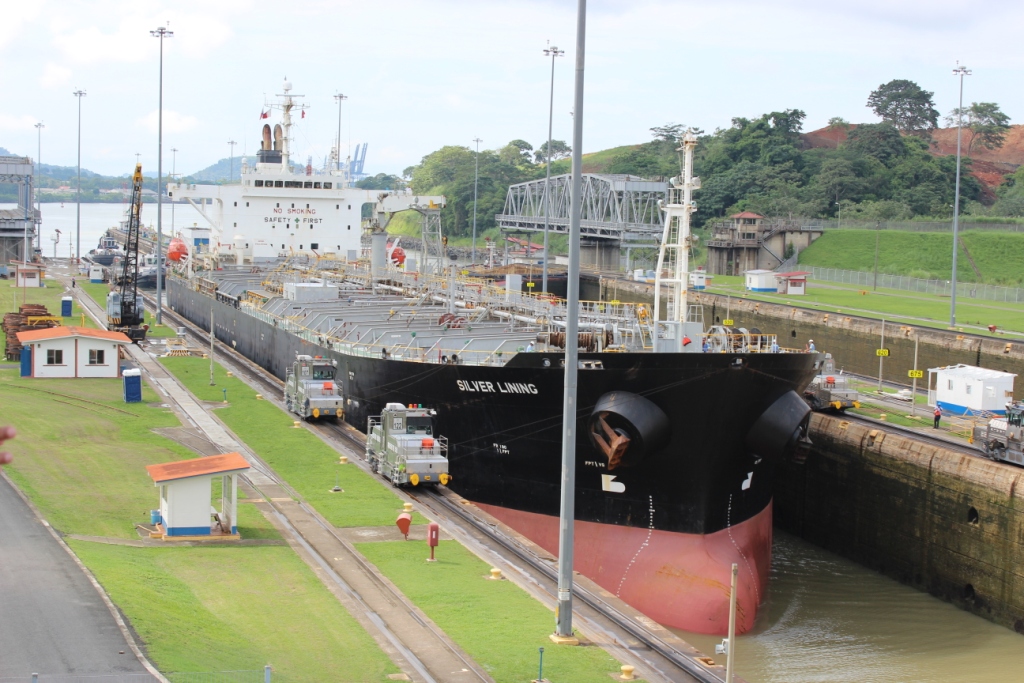 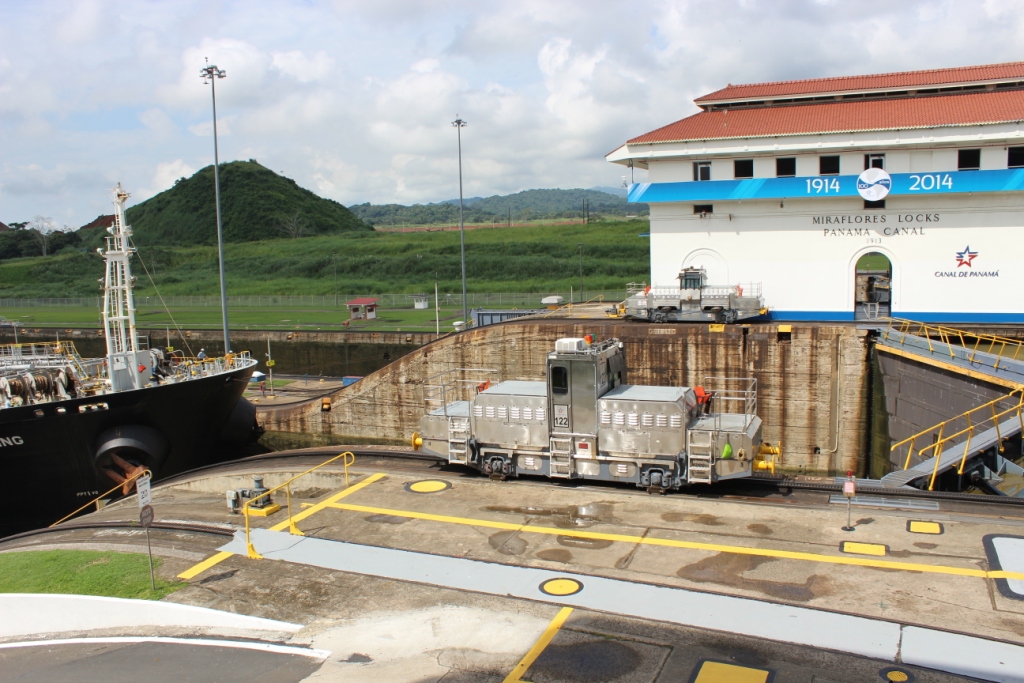 These trams work together to control the movements of the ship. 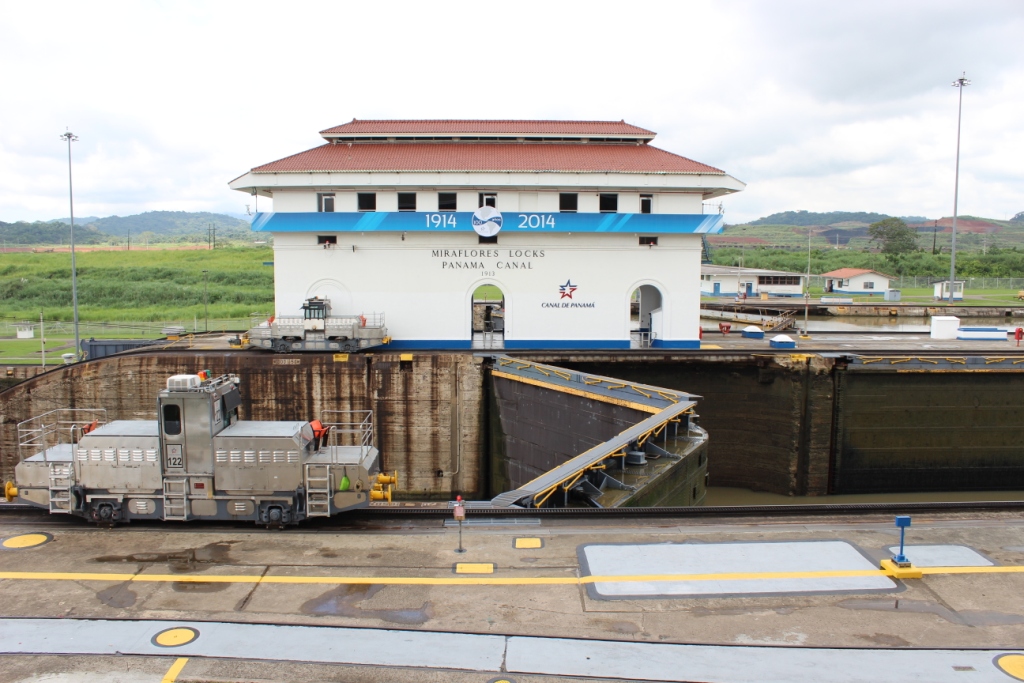 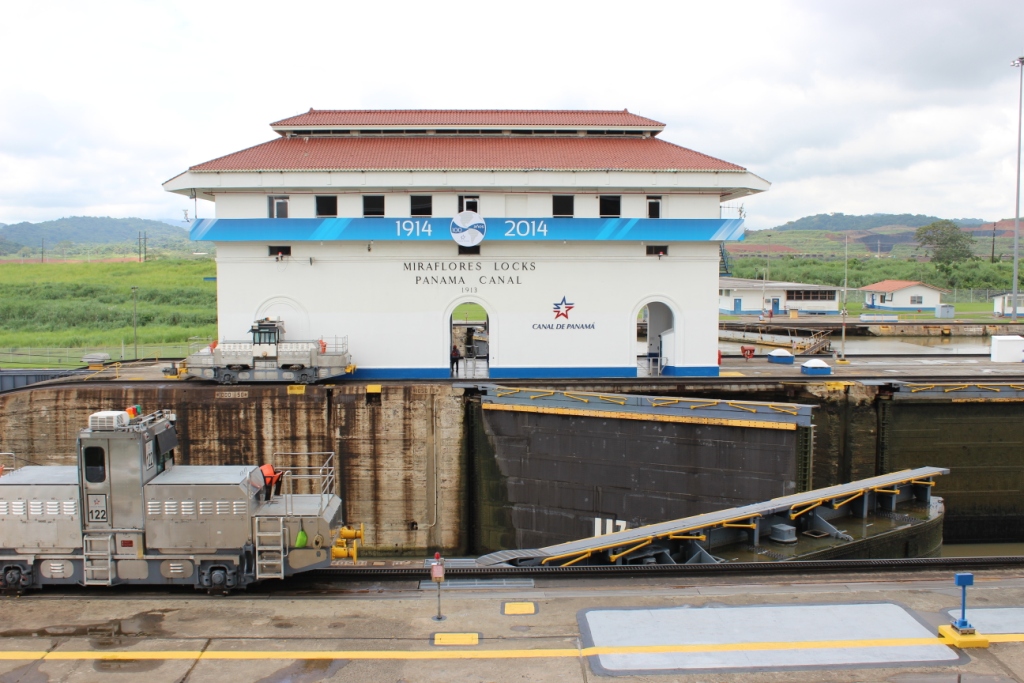 With the water levels even, the lock opens to join the chambers. 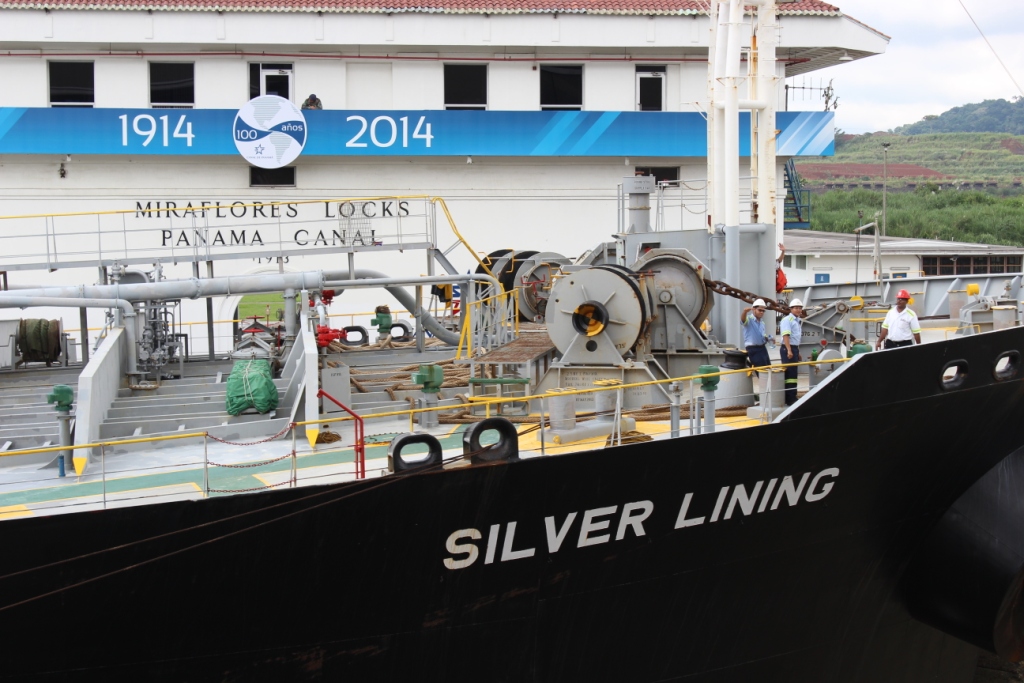 The ship, the Silver Lining, passes through the now open lock. 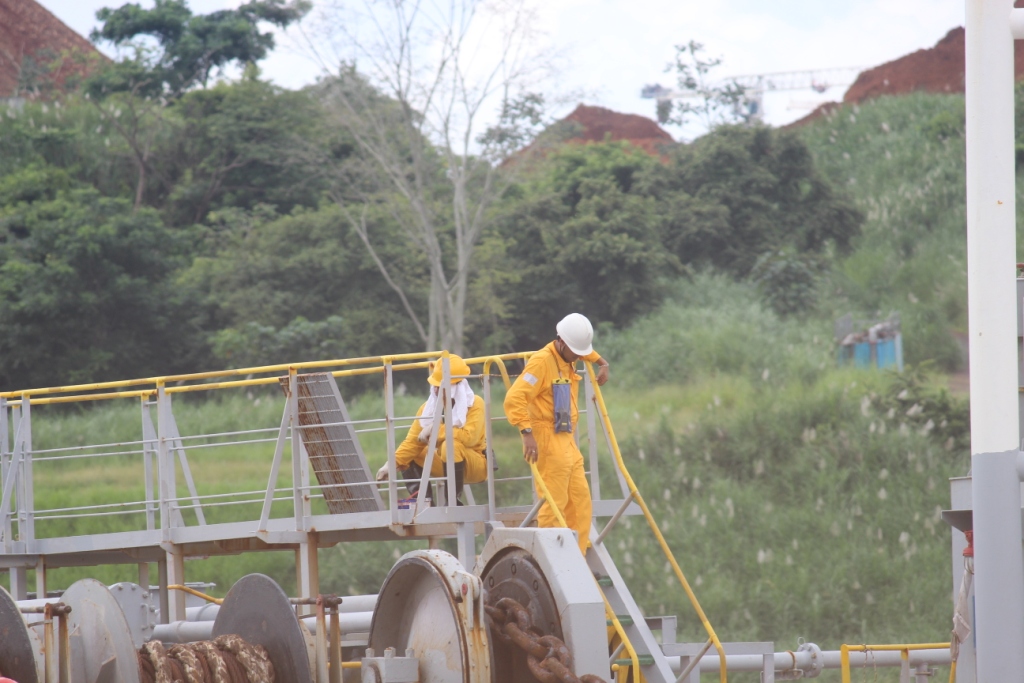 Workers on the ship as it passes through the locks 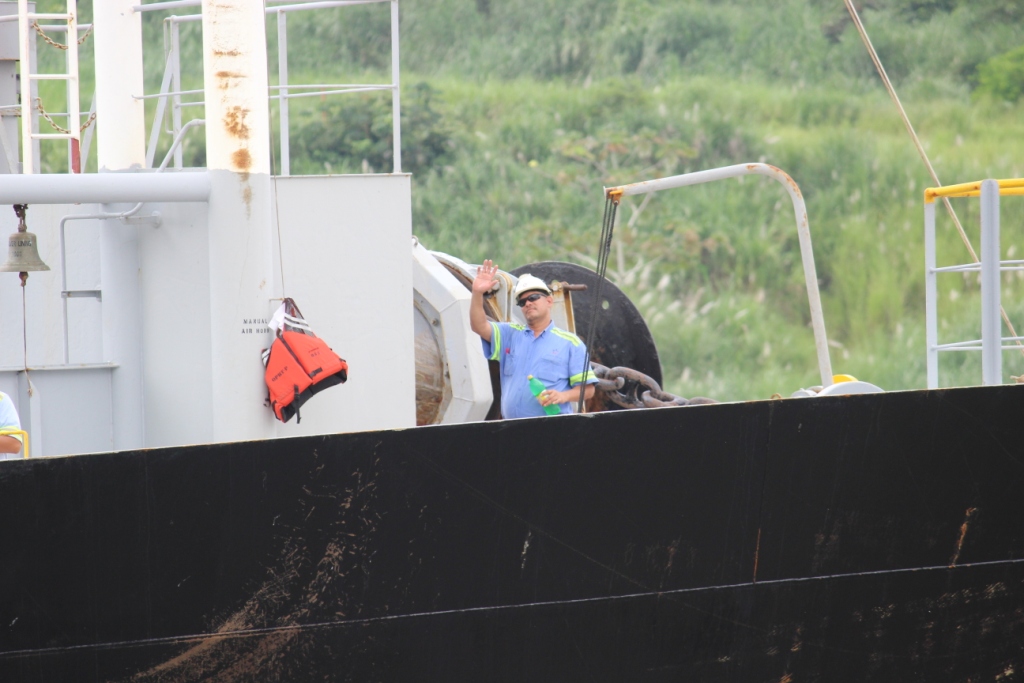 There was a lot of happy and friendly waving. I was like a child seeing a firetruck. 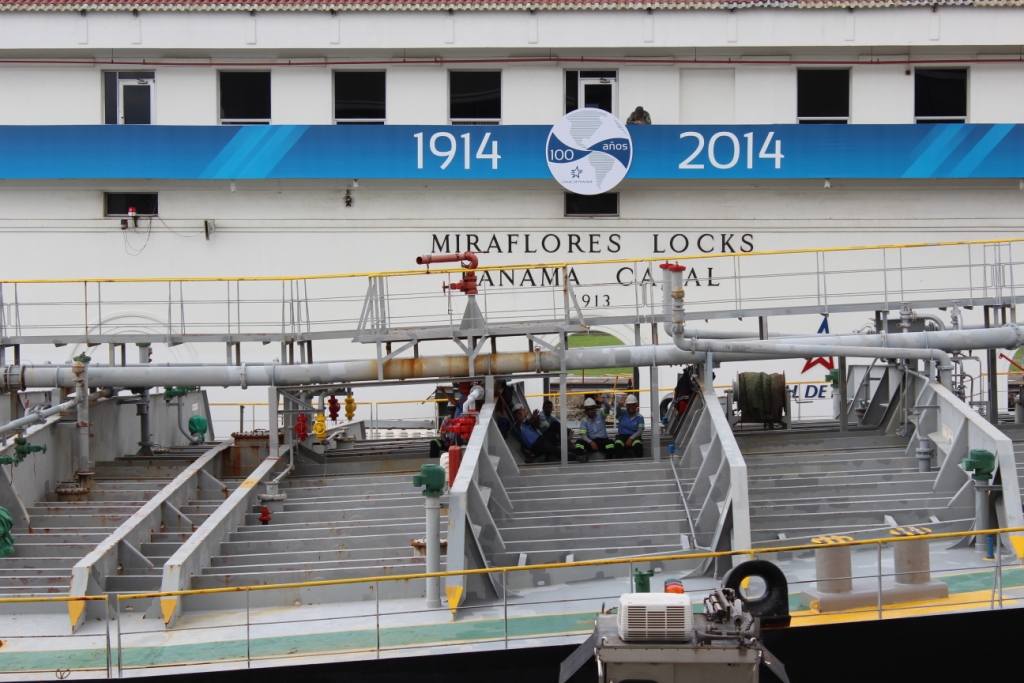 A crew taking a break while passing through the lock. More fun waving. 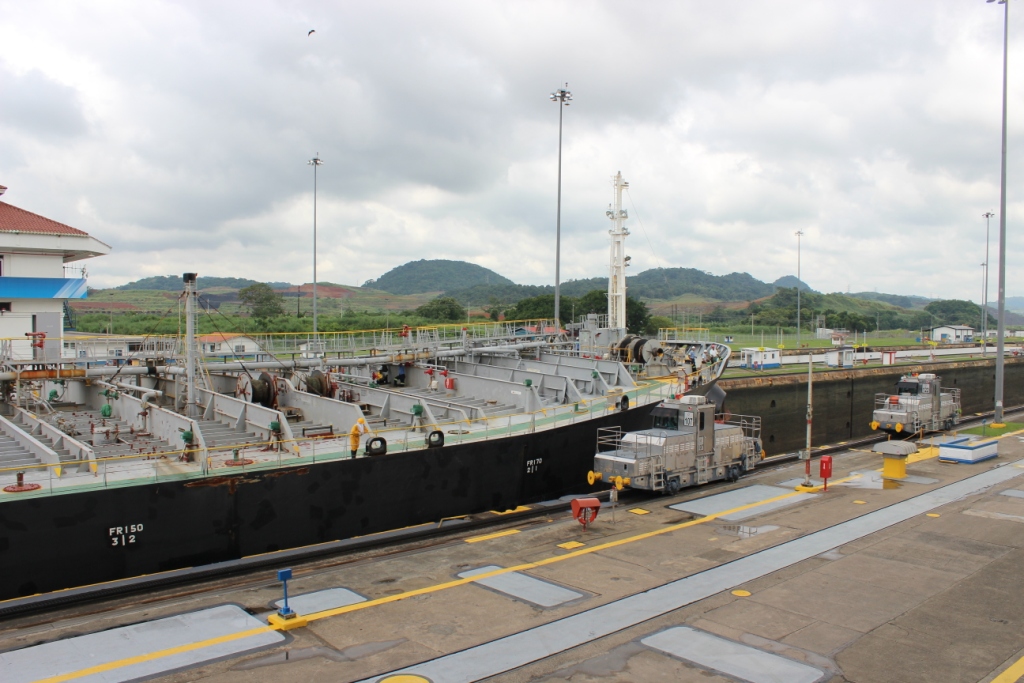 Ship moving into the second chamber 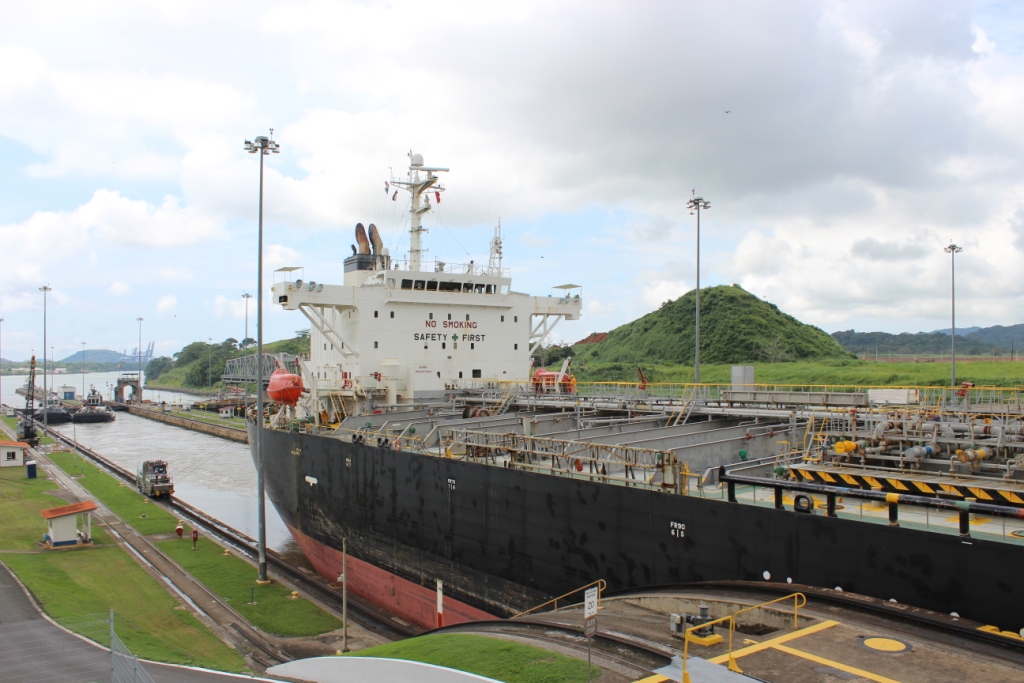 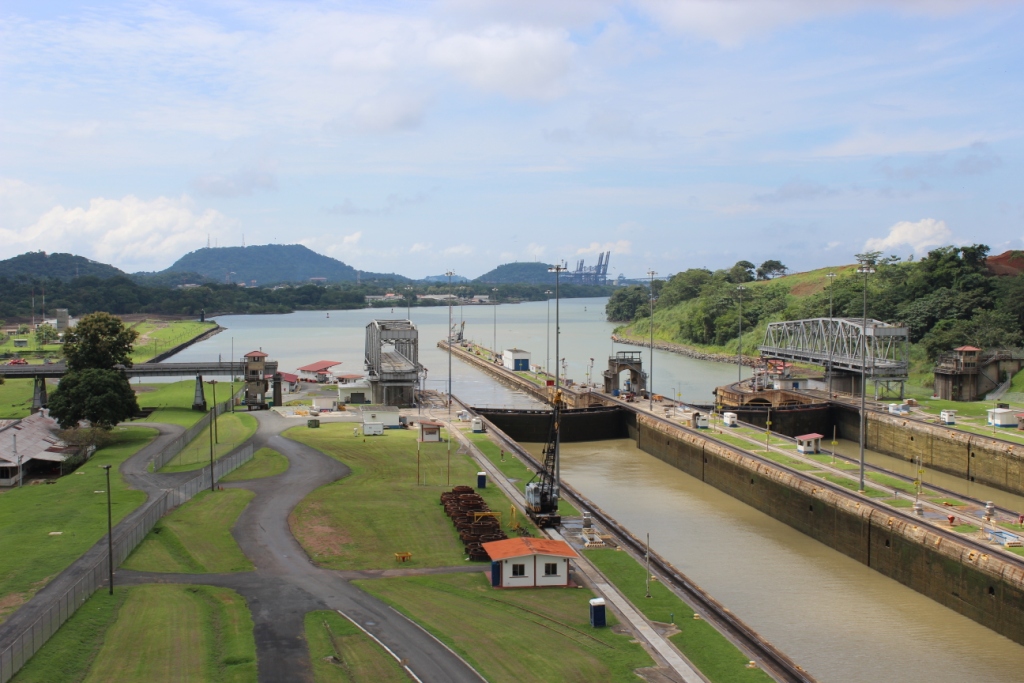 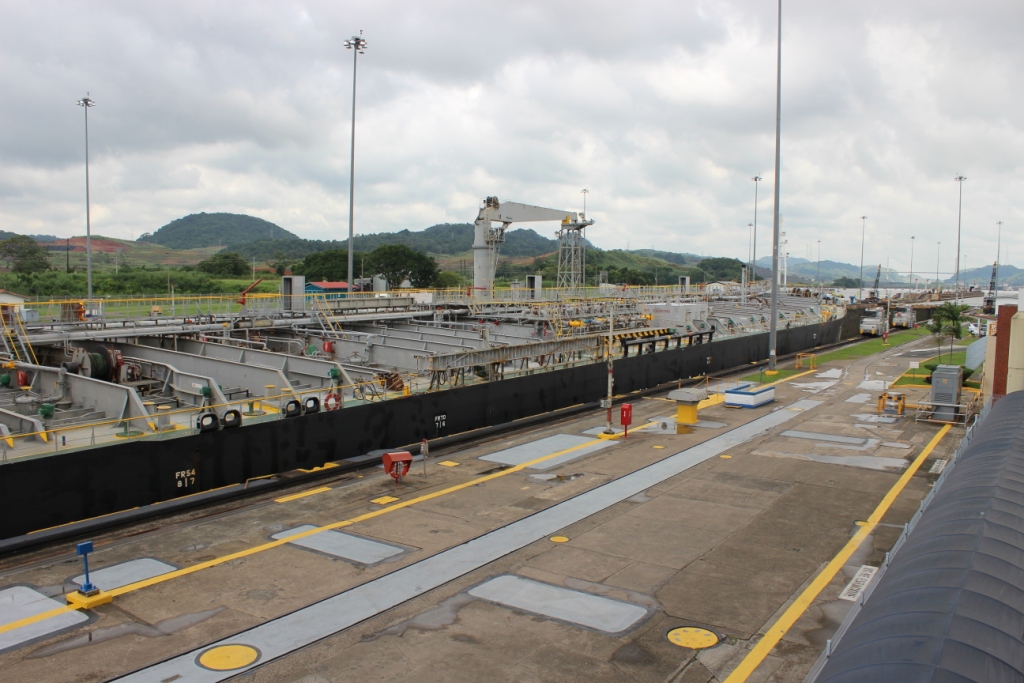 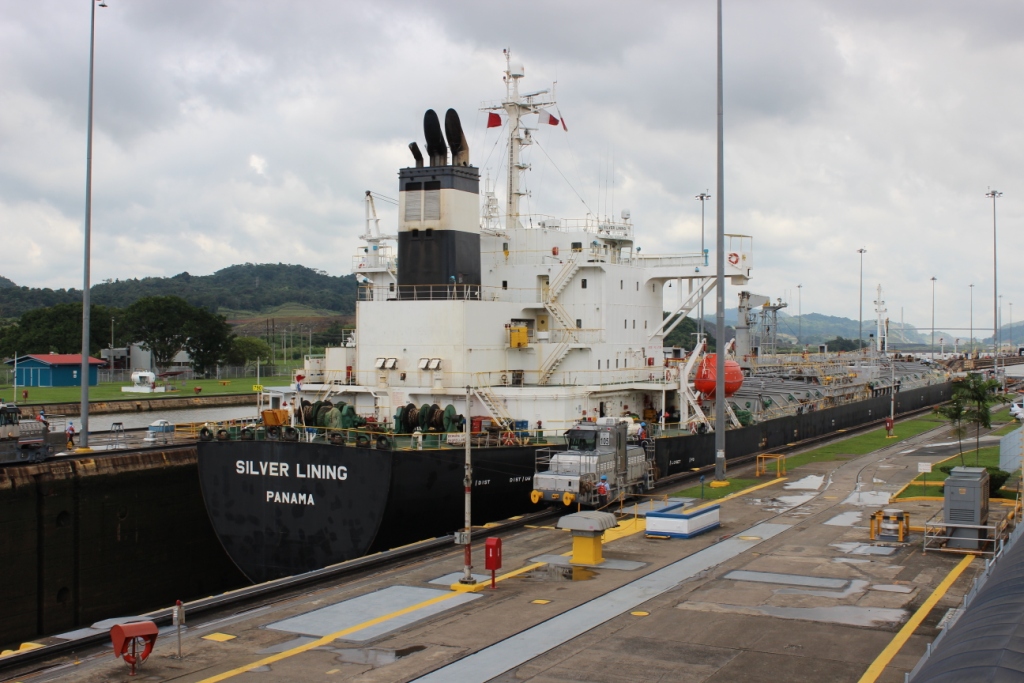 Ship continues into the second chamber 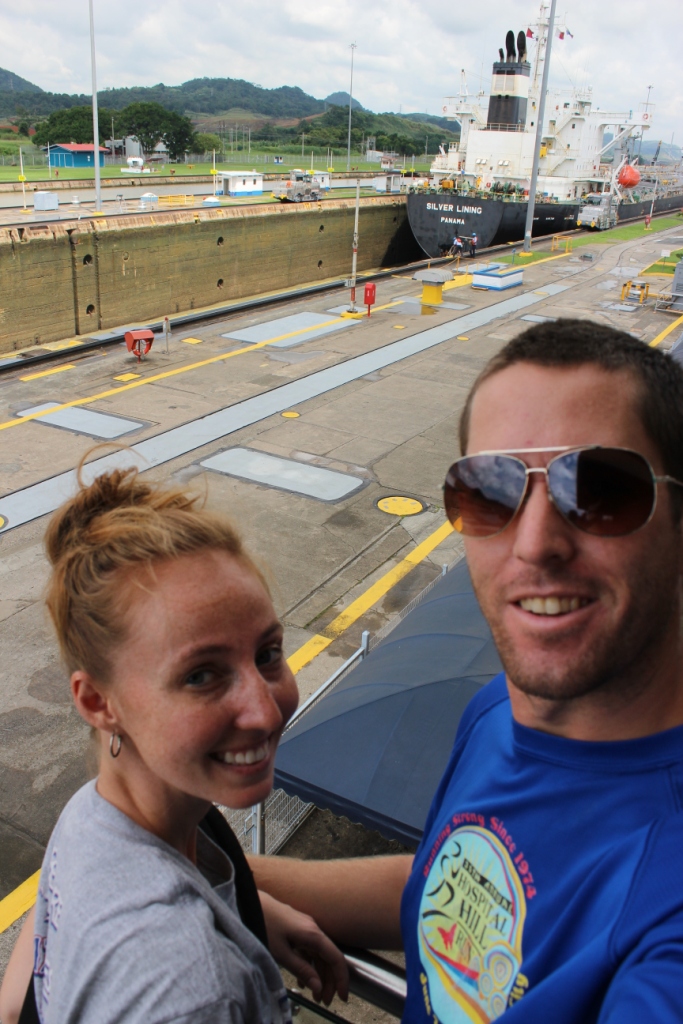 Kietzmans at the Panama Canal - Maybe the most excited people there 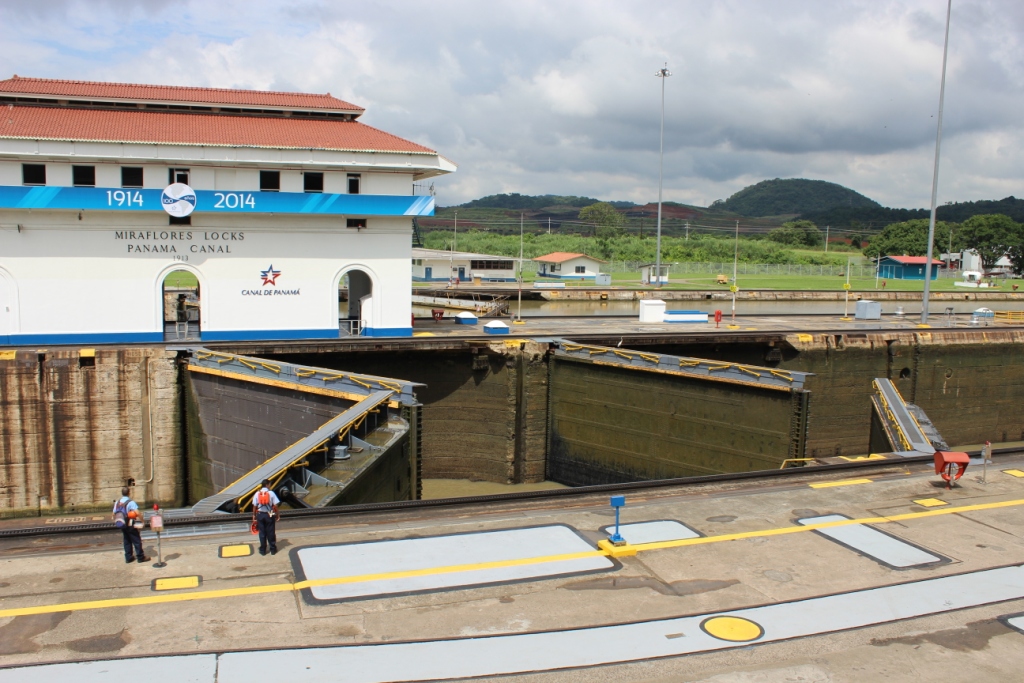 Locks closing behind ship to shut the second chamber 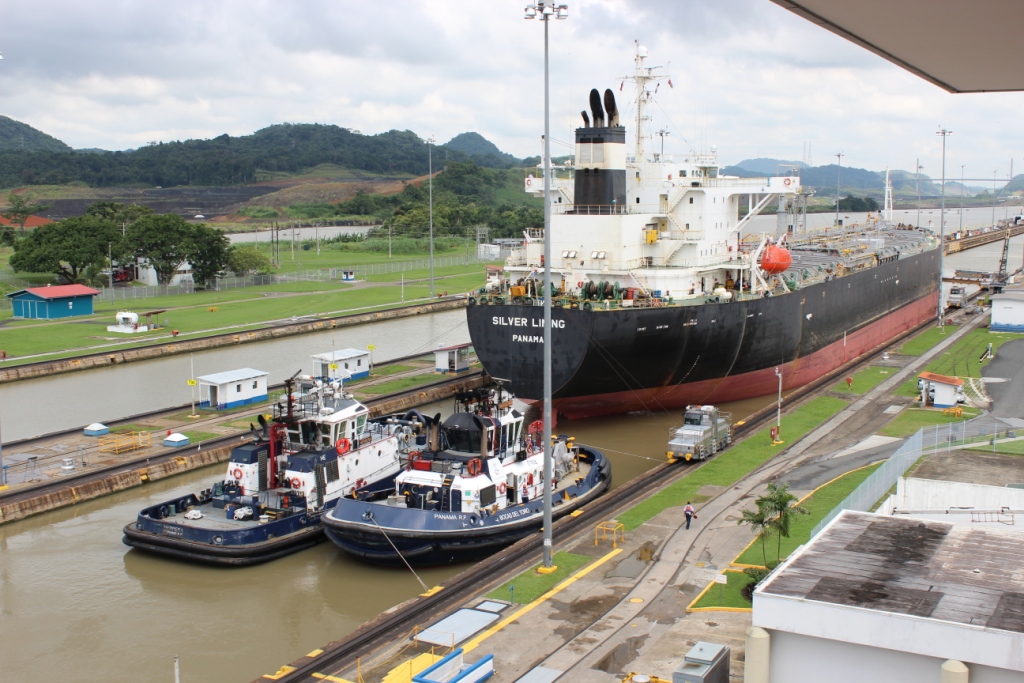