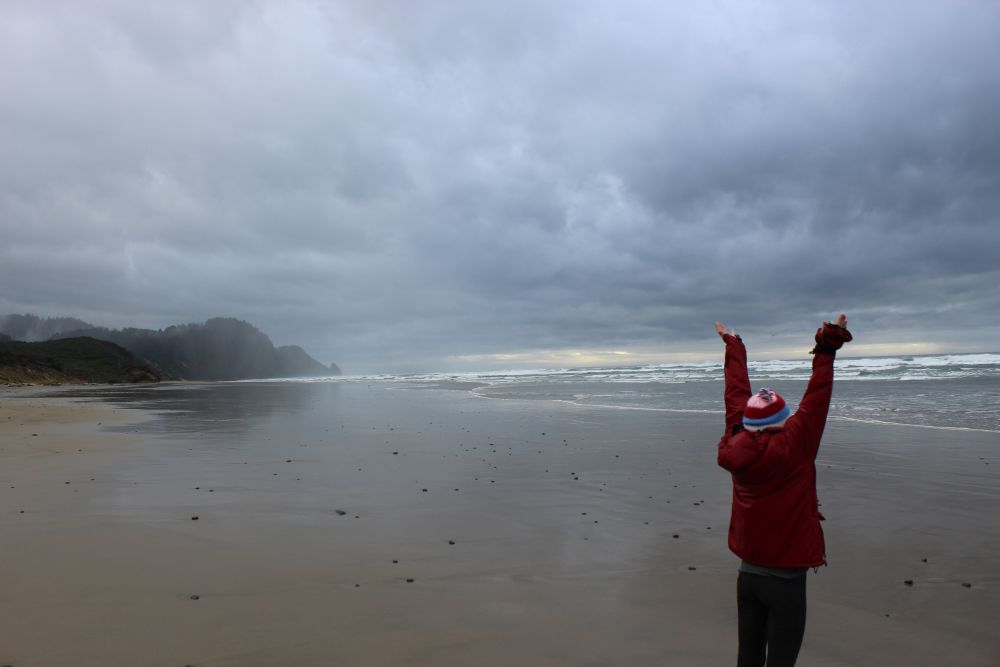 Of all of the places in our sights when we began the painfully short North American portion of our adventure, we ignorantly viewed the Oregon Coast as one of the more expendable stops. It sounded great and all, but we didn’t really have a specific place in mind and time was a hot commodity. Interestingly, we ended up spending more days in our Oregon cottage than we did anywhere else from Maine to California. Much like Montana, the serenity and natural beauty of the region rendered us speechless on a daily basis. Unlike Big Sky Country though, the majority of our time in Oregon was spent shrouded in fog and looking down on the ocean rather than up at the peaks.

Our cottage, Sans Souci, which means “without worry” in French sat nestled into the side of a high hill just north of Florence, Oregon on a huge, private plot surrounded entirely by trees but with ocean views on two sides. Our twisting, mile-long drive from main road to cottage crept through the fern carpeted grounds and moss covered trees of west coast rainforest that sometimes arched so far over the roadway that they blocked all of the suns rays from shining through. We spent a lot of time at Sans Souci – working, reading, playing poker, meditating (me), and running the hills (Ian). It was a much needed mental rest, and I was reminded that, whether one has a house and a lot of things or just a van and a blog, it is very important to find time to de-clutter and re-center.

On the days we elected to take the drive up US 101, we marveled at the rugged cliffs and flat beaches, one after the other, as if each portion was both part of a frame for its neighbor and the focal point of its own masterpiece.  Walking the wet sand, we were amazed by the seclusion and surrealness.  The ocean was angry and thundering, sweeping across the wide beaches with so much force that it could push the salty water 50 yards inland at a depth of just a few inches, while everything else around it calmy conformed. We had miles of coastline to ourselves; the dogs ran wild and free, and Ian and I happily opted to go barefoot as we examined the treasures left behind by the surf and tried to inhale the scene.

Dotting the Oregon Coast Scenic Byway are also a handful of small towns in which we spent only a limited amount of time. Florence, conveniently located just a beautiful hour’s drive west of Eugene, is one of the larger of these with a population around 8500. Along the river is a cute Old Town District with a variety of quaint shops and restaurants, and where I worked for a few hours one afternoon at Siuslaw River Coffee Roasters. Their staff was friendly and environment lovely, with seating indoors as well as out on the river and apparently pretty fantastic coffee.  I ordered an herbal tea, but overheard half a dozen folks commenting on how delicious the joe was. Another notable Florence highlight was the abundance of quality thrift shops.  Every couple of blocks, a large second hand store had planted itself, full of fabulous finds and great prices that were absolutely worth popping into for a few minutes if for no other reason than to ogle toys we hadn’t seen for 20 years and vintage homegoods that we no longer have need for.

By the time we departed, we were counting the Oregon Coast among our most highly recommended US destinations. It’s no surprise though that we hadn’t heard people raving about the region as a must see before, as the unencumbered genuineness and peaceful solitude found in an area not yet overridden with tourists was part of the appeal that we couldn’t have appreciated more.