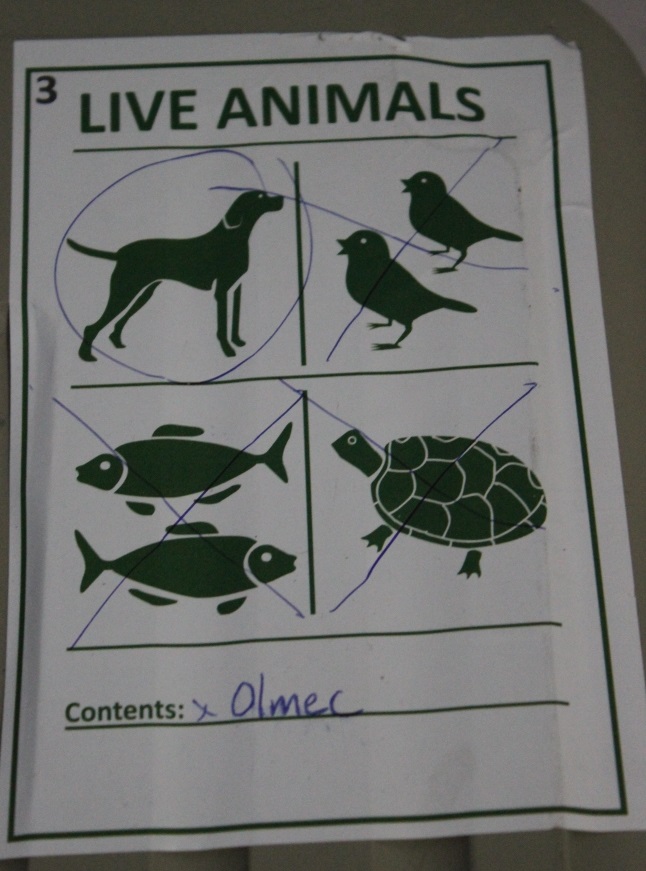 If you’re just joining us in this series of Darien Gap posts, you can read about what the Darien Gap is here. If you’re driving, check out how to prepare ahead of time here, how to complete the Panamanian side of vehicle shipping here, how to complete the Colombian side of vehicle shipping here, how to cross the border as humans via air here, and a blog about total expenses here. This post though, exists to detail the process of getting from Panama to Colombia with pets, specifically dogs, information that we struggled to find before our crossing. We usually rely heavily on the experiences of those before us and for the first time, we felt like we were flying blind. But we made it and so did our pups, so here I go to tell you how it happened.

As Ian explained in his post about preparing for the Darien, there are two main ways for a person (or dog) to get around the Gap – by water or by air. The water route is then split into various options such as a series of uncomfortable speedboats for cheap or a multiple day cruise for $500. To us, the cruise sounded wonderful and with per day costs considered, wasn’t actually more expensive over time than flights; however, we didn’t do much research into this avenue for two main reasons: 1. We run our own business, and 4-5 days offline followed by 2-3 days away from the computer while collecting the car and then at least 1 day away from the internet while driving to our September apartment in Medellín just didn’t make sense, and 2. Maya, our girl dog, lacks social skills, so we probably wouldn’t really enjoy the trip much anyway. In another situation and with another dog, perhaps this could be a fabulous option. It’s hard to imagine not being able to find some captain willing to take on a four-legged passenger if the price was right for him. That said, we don’t actually know how this works or if it even can. I seem to recall hearing at one point that maybe outside dogs weren’t welcome on the San Blas islands, but I know absolutely no basis for the validity of that statement. If anyone tries this, we’d love to hear about it.

We opted to travel by air, taking our dogs on a plane for the first time ever. Two main airlines fly multiple times daily between Panama City and Cartagena (where our vehicle was headed), Avianca and Copa Airlines. In general, Avianca is cheaper, but Copa Airlines offers a couple of direct flights per day, minimizing the amount of time that the dog is being transported as cargo. We chose Copa Airlines, so it is their process that this post will describe.

It’s important to note that pets are only permitted on Copa Airlines Monday through Thursday. We spent a lot of time trying to figure out which flights our dogs would be welcome on on the Monday we were flying and were repeatedly told that any flight was fine. A week before we left, a Copa Cargo representative finally told us that the flight we had booked our seats on could not take dogs and that we needed to move to a later flight. Fortunately, there was no charge for this change. We were never really clear on why our original flight wasn’t an option or why they couldn’t tell us sooner, but we think that it had to do with the fact that it was the earliest flight of the day, which would have meant delivering our dogs to Copa Cargo before their office at the airport was open. On a positive note, prices for one-way flights from Panama City to Cartagena seem to change little, if at all, and we have heard that they never fill up (ours certainly didn’t) in case you would rather wait to book than have to change flights if you pick the wrong one.

Along with kennel specifications which will be discussed below, a visit to the vet in the departure country within ten days of the flight is required in order for a dog to travel with Copa Airlines. The vet will provide two documents which Copa Cargo will need in order to finalize the reservation and provide a confirmation number. They can provide a quote before receiving these forms, but they cannot actually confirm a reservation, meaning that the dogs cannot be booked for travel until the week before the flight. For travelers who like to have their plans made in advance, this may feel a bit last minute, but no one that we worked with at any point of the process seemed to think it was problematic or abnormal.

On the Panamanian side of the border, we had at least been working with a representative of the airline who told us what we needed and what to expect. On the Colombian side, we were just winging it.

That’s it, friends. Follow those simple steps, and you can be reunited with your beloved canine in Colombia. Indeed it is a long process, but it really isn’t difficult. As with almost anything, it’s more a matter of patience and positivity than anything else. Questions? Let us know!