The Best of San Francisco 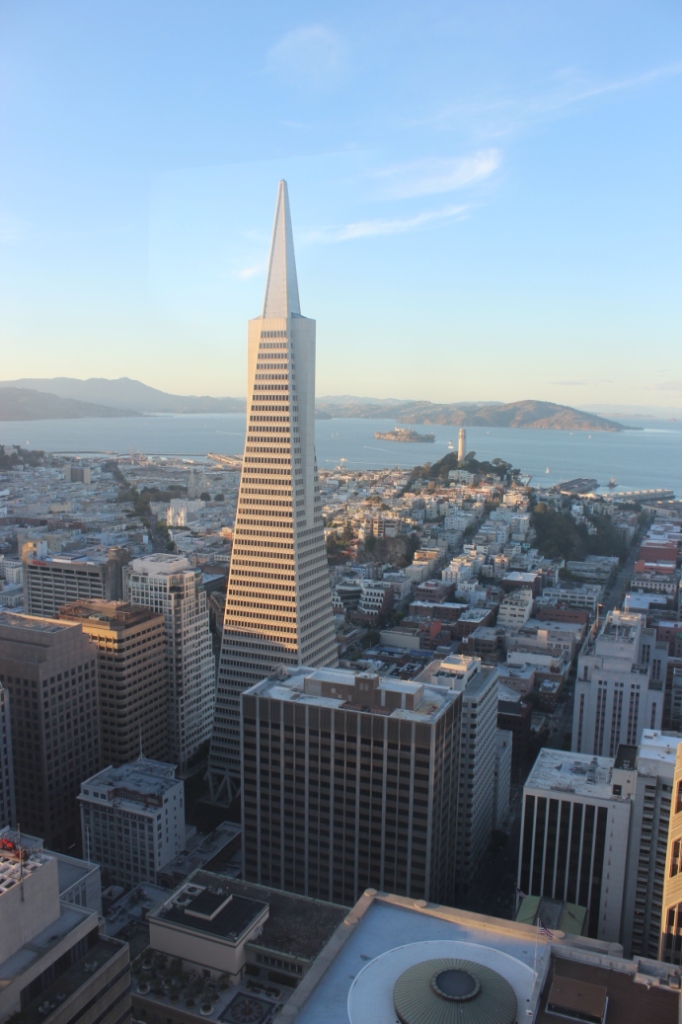 After a lengthy retreat with nothing to do and nowhere to be on the Oregon Coast, our time in the San Francisco Bay Area was far too short, the list of sights far too long to possibly scratch the surface of. We have commented multiple times since our departure that we may have covered a tenth of a percent of what it has to offer.

Larkspur Ferry and the Port of San Francisco

Wary of driving (and paying for parking) in San Francisco, we lucked into a great tip from the owner of our apartment, Keith. He recommended catching a ride on the Larkspur Ferry, only a ten minute drive (with free parking!) from our apartment in San Rafael in the North Bay area, and utilizing San Francisco’s world class public transit system. So it was that on a cool but sunny morning we made our way past the tailgaters (we were confused too — turns out there was a Flugtag event in town that day) and found our seats on the first ferry of the day into the city. The dichotomy between locals and visitors was obvious, with the former heading straight inside to read a paper or stare at a phone and the latter crowded around the rails outside, cameras clicking away. As we pulled out into the apparently unusually calm bay, crew teams glided by us near the shore and the chatter of sea birds filled the air. The fifty minute journey that followed was a scenic introduction to the geography of the Bay Area, passing by the San Quentin State Prison and the hilly residential areas of the North Bay before affording us sweeping views of Berkeley, Oakland, the Bay Bridge, the military ruins on Angel Island, Alcatraz, downtown San Francisco, and finally the Golden Gate Bridge.

At last, we pulled into the ferry terminal at the Port of San Francisco and debarked, spilling directly into the throng of the city. We had expected liveliness on a Saturday morning, but what we found ourselves in the midst of was almost overwhelming. Not sure where to go, at first we drifted with the flow of the crowd among the shops and cafes in the terminal itself, then into a sprawling farmers’ market, before finally tumbling out onto the Embarcadero. After figuring out where to buy Muni passes for the day, we waited for a streetcar to get this show on the road. The first one came and was packed like sardines, so we hung back and waited for the next. The second was nearly as crowded, but we managed to find a nook. As we stood elbow to elbow with each other and everyone else, the prospect that the crowds might detract from our experience was all too real. With each passing stop, however, the load thinned, and the smothering crowds near the terminal fell farther away. By the time we hopped off the car, excitement had returned to our steps.

Cable Cars (and Trolleys and Buses and Streetcars and Trains) 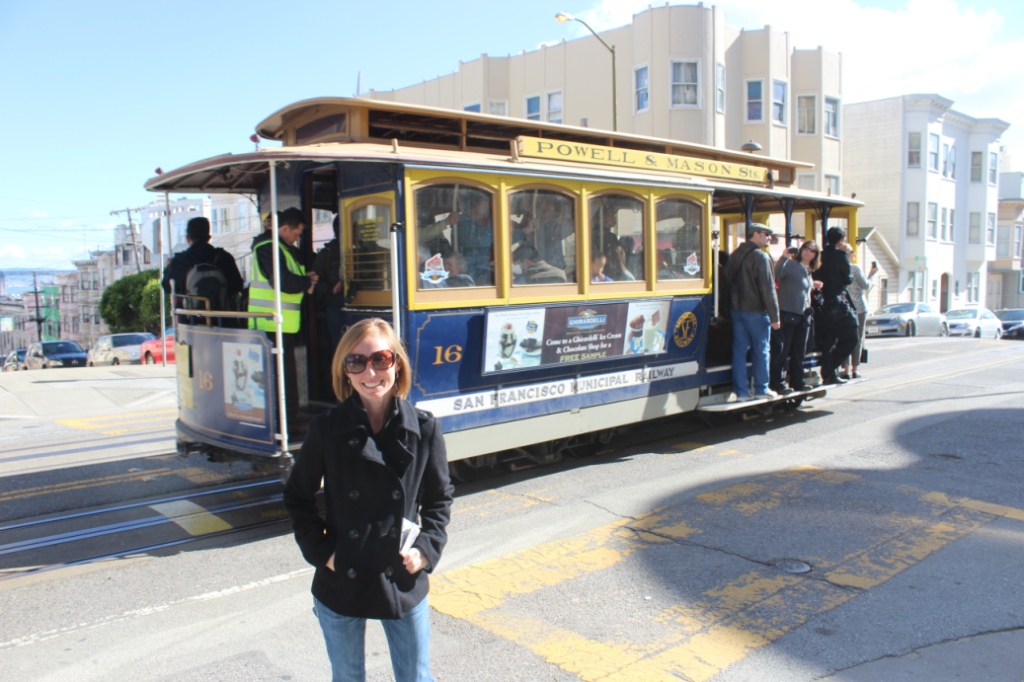 The San Francisco Municipal Transportation Agency (or “Muni”, for short) consists of 54 bus lines, 17 trolley lines, 7 light rail lines, a heritage streetcar line and, most famously, 3 cable car lines. The San Francisco cable cars are the last manually operated cable car system in the world and the only mobile National Monument. For the uninitiated (as we were) a cable car works by grabbing and releasing a continually moving cable embedded in the road that is powered by a central station. The first San Francisco line began operation in 1873, and by 1890 there were twenty-three operating lines in the city. By 1892, however, the decline of the cable car had begun, as newer electric streetcars proved to be much cheaper to build and operate. Their obsolescence was for a time delayed only by the complaints that the overhead wires of the streetcars were an eyesore. These complaints evaporated overnight when the 1906 San Francisco earthquake struck, destroying the vast majority of the cable power houses and cars. Six years later only eight lines remained in existence, and only because they covered hills too steep to be traversed by the streetcars. The improved buses of the 20s and 30s further weakened the cable cars’ presence in the city, and by 1947, then mayor Roger Lapham proposed shutting down the two remaining municipally owned lines (there were also three private lines at the time, though those too would soon falter as well). The Citizens’ Committee to Save the Cable Cars was quickly formed by a coalition of women’s civic groups, and they successfully forced a referendum to the city’s constitution forcing the city to continue operating the lines (when the private lines failed four years later, they were again able to save a portion of the defunct lines). Thus, three lines continue in operation to this day, though their limited service areas and high fares mean they are more of a tourist attraction that a legitimate form of transportation.

From the streetcar we made our way to Fisherman’s Wharf. A neighborhood and popular tourist spot on San Francisco’s northern shore, it has been the home of San Francisco’s fishing fleet since the Gold Rush. If you like, you can find a harbor or fishing tour on a plethora of boats right as you walk along the waterfront. A bustling place chock full of museums, attractions, restaurants, and home to a colony of sea lions, these days Fisherman’s Wharf is truly for the tourists, and is often spoken of derisively by the locals. If, however, you are up for fresh Dungeness crab or clam chowder served in a sour dough bread bowl, there’s no reason not to stop by.

If one were to try to capture the essence of San Francisco, no doubt the hills and Victorian architecture of the city would be high on the light of quintessential characteristics. The characters of countless classic books and movies have graced the romantic streets here, yet to people of a certain age a specific song and the accompanying faces keep seeping in:

By 1:00pm we were both feeling a bit peckish and a bit parched, so we headed to the Rogue Ales Public House on the advice of a friend (thanks Amelia!). We had both had Rogue’s best selling bottled varieties before, but we were in for a treat as we took spots on the short side of the bar. They had thirty or so of their own beers on tap, from the standard (Dead Guy) to the adventurous (Chipotle Ale) to the milkshakey (Double Chocolate Stout), not to mention an equal number of guest beers. Confronted with so many choices, we didn’t feel like we had any option except to opt for a flight, picking out four samples from the list. They were all amazing. If we had more time, deeper wallets, and a driver, there’s no telling how many of those flights we might have gone through. A gentleman sidled up to the corner seat at the bar next to us, and after some chatting we grew quite envious of his buffalo waffle chips, so we buckled and got our own. They are highly recommended. I am making my mouth water just writing about them. 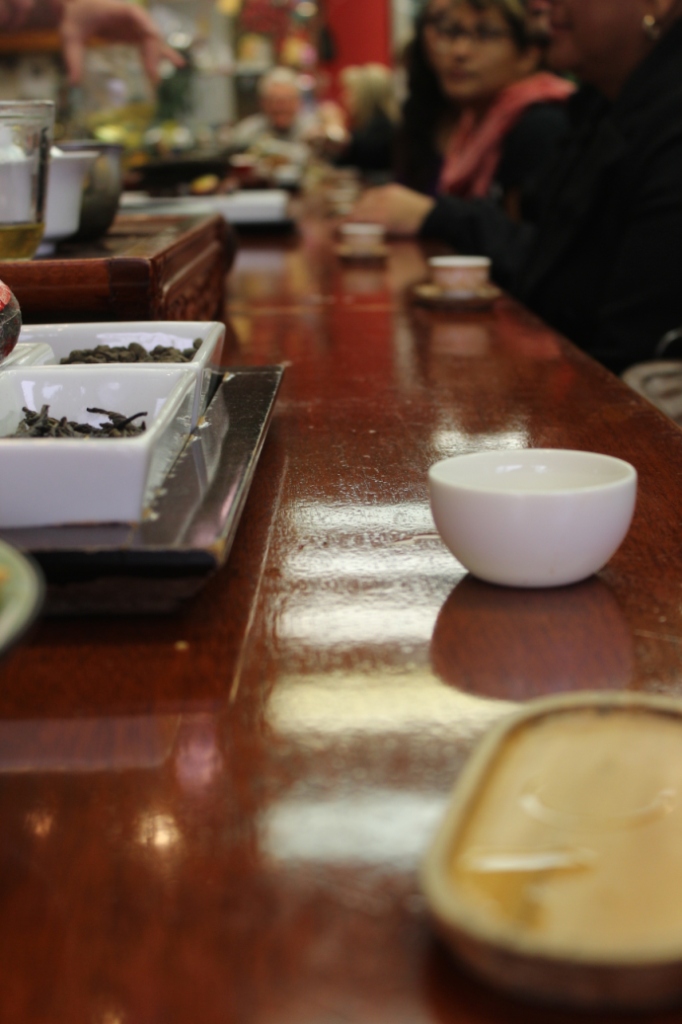 After utilizing the extensive Rogue-beer-knowledge of our neighbor at the bar to help pick our flight, the topic of conversation turned, as it is wont to do, to our upcoming travels. Turns out Jeff (his name has been quite creatively changed for this post), had several recommendations for us, speaking highly of the Panamanian jungle and Bocos del Toro. We lamented how short of a time we had to spend in San Francisco, and before we knew it he was leading us on an insider’s tour of the city. The first stop was Chinatown, where he led us past countless markets and merchants selling their wares and into Vital Tea Leaf, where we were greeted heartily by Uncle Gee, apparently an old friend of Jeff’s. After insisting I call him “Uncle” and telling me in a friendly manner that he would hurt me badly if I made Brianna cry in his presence, we sat down at the bar. We proceeded to throw down round after round of fine teas, from Blue People to Jasmine Green to White Monkey, and learned a little lesson about the art of tea during each small cup (for example, boiling water is too hot to use for tea, fresh leaves can be used for a half dozen cups or more, and the first steeping should be discarded). We emerged with a bit of a head rush and feeling much lighter on our feet than we had before we went in — what exactly was in that tea? Jeff showed us a bit of the underbelly of Chinatown, pointing out underground gambling dens and alleys controlled by ancient Chinese gangs. From there we hiked to an art gallery, where the curator again seemed to be an old friend of Jeff’s. He ushered us into a back room and showed us a series of framed photographs he had just sold, a series of original prints of outtakes from one of the most famous album covers of all time. After that he took us to the top of the Grand Hyatt and another building whose name escapes me for amazing 360 degree vistas of San Francisco, before leading us back toward the ferry terminal via several more points of interest along the way. We were scheduled to meet a friend for drinks before our ferry left at 7:40, so the three of us found a table at Schroeder’s. Three pitchers of Maerzen later, making sure we got out the door in time to catch our boat, he picked up the tab, said goodbye, and disappeared into the night. It was certainly not how we had expected to spend our afternoon in San Francisco, but our walking tour turned out to be a priceless experience and one of the more amazing surprises the road has given us these past few months. 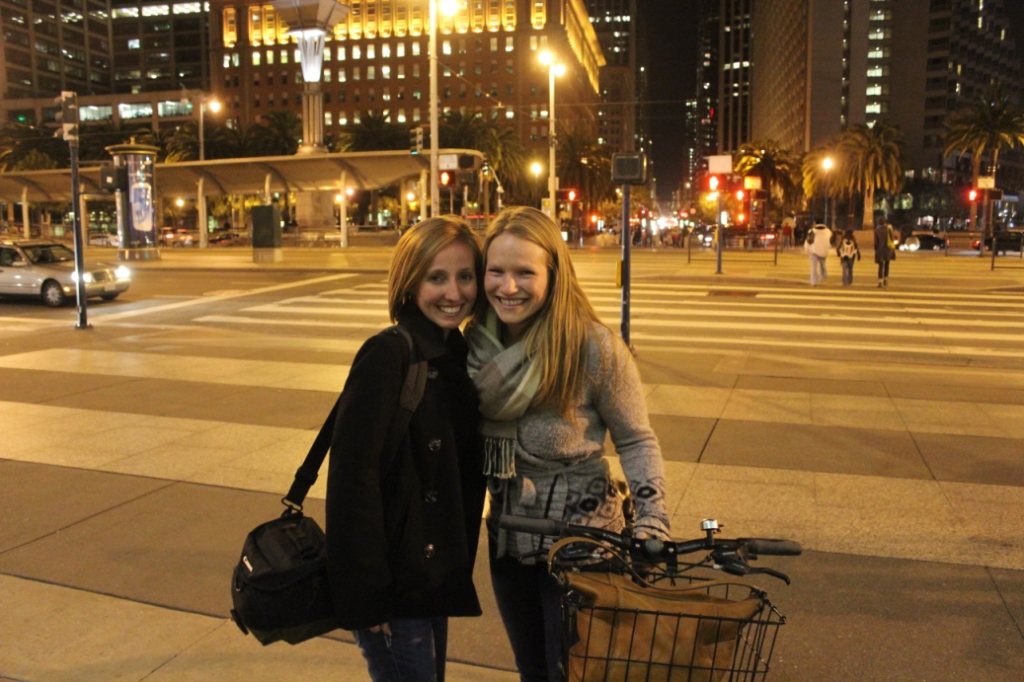 Is any city cruiser really complete without a cute little basket tucked between the handle bars? I certainly don’t think so, and neither does Brianna’s old friend Kathryn (she isn’t old; they met when they were children). We had remarked many times during the day that having a vehicle in San Francisco seemed like it would be more hassle than it was worth. Kathryn confirmed these suspicions for us, rolling into the aforementioned Schroeder’s on two wheels. It is always lovely to see old friends (and make new ones), and this night was no exception. The beer was cold, the conversation was warm, and, as always, our time went too fast. With the clock ticking down to our departure, she guided us back to the ferry terminal, where we said our goodbyes before running through the building to make sure we made the last boat. Ignoring the chill in the air, we stood outside on the rear deck and watched the city lights slowly disappear over the water.

No post on San Francisco would be complete without mentioning its most famous landmark. We did not get to enjoy the experience of driving the bridge (as discussed earlier, driving in the city seemed stressful), but on Sunday morning we drove from San Rafael to the Golden Gate National Recreation Area to take in views of the bridge and the city. The road to the vistas was crowded, and we had to fight for parking, but the views were panoramic and worth the wait. I will let the pictures do the talking. 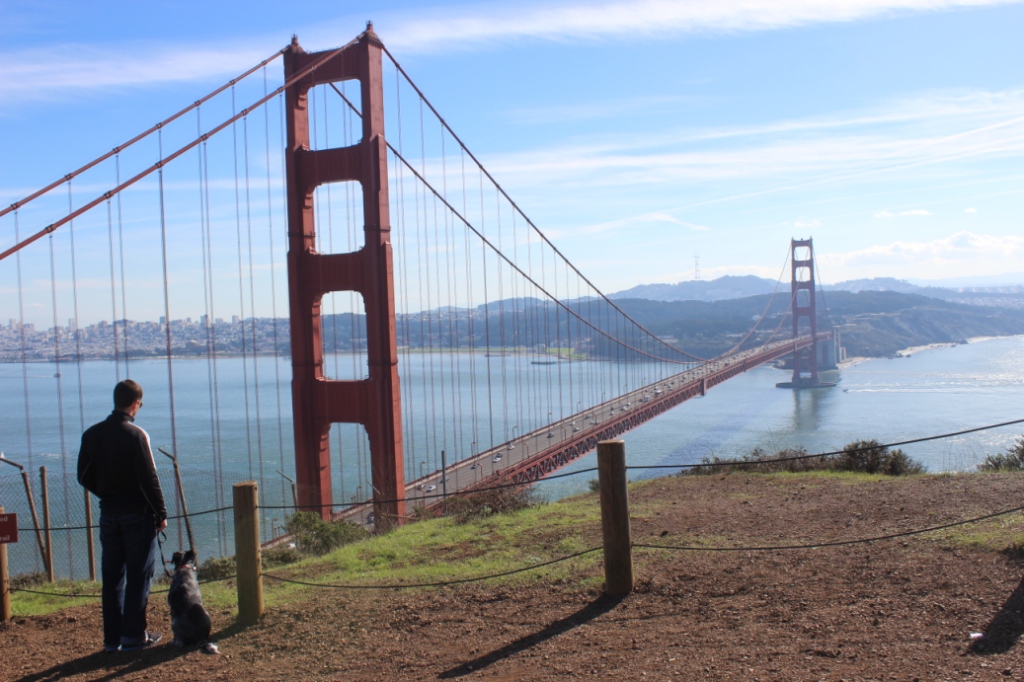