When most Americans hear the word tequila, their minds are catapulted to a shot they probably shouldn’t have taken, their mouths water for a lime, and the Champs rock out in the background as Benny the Jet Rodriguez and his naive comrades make a mad, chew in place, dash for the tilt-a-whirl. Tequila is a beverage that gringos put their crazy pants on for on Cinco de Mayo or dollar margarita night. It is a driving force behind increased volume and an insatiable desire for burritos. Fair enough. We’re Americans. We make bourbon. But in the Mexican state of Jalisco, as we discovered last week, they make tequila. They live tequila, and they are beautified by tequila. In the town of the same name, a World Heritage Site, the infamous elixir is indeed a livelihood, a history, and a culture.

Tequila, a town of 26,809 inhabitants, sits just 65 kilometers (41 miles) northwest of Mexico’s second largest city, Guadalajara. In fact, we only happened upon it in the first place because we were stopping for the night in the area and didn’t want to stay in a huge city. What a pleasant surprise! We were treated to beautiful evening exploring cobblestone streets and perusing the main square in awe of their colonial church, the magnificence of the distilleries, and their proximity to one another. Tequila, as a whole, was completely lovely.

After checking into the Hostal Viajero, where we were given the 10-bed dorm space as a private room for just 200 pesos ($15.90 USD) and told the dogs would be allowed to stay with us, we set off on a family walk. Less than a block away we found ourselves strolling along the cobblestone street between Mundo Cuervo to our right and Casa de Sauza to our left. Both complexes took up at least a dozen square blocks and each was beautifully kempt in decorative schemes that would shut Pinterest down. José Cuervo’s walls were donned with shades of yellow, orange, and red, the black stamp of their logo, and intermittent placement of suspect ravens. Through gates featuring the profile of agave leaves we could see detailed fountains, rolling gardens, and luxurious event spaces. Along Calle José Cuervo, a fantastic promenade leading back the Plaza Principal, doors stood open to tour launch spots, tasting areas, and the Cuervo Foundation. Just opposite Mundo Cuervo’s almost dark luring, Casa de Sauza’s regal complex stood brightly surrounded by stark white walls adorned with a continuous strip of stripes all colors of the rainbow. It’s entrance sat atop a set of stairs, truly embodying the feeling of an estate rather than a distillery. These are, of course, only two of the hundreds of distilleries producing tequila, but their enormity and nearness was quite intriguing. They gave whole new meaning to the fields of blue agave we had watched appear over the hills on our drive into town. 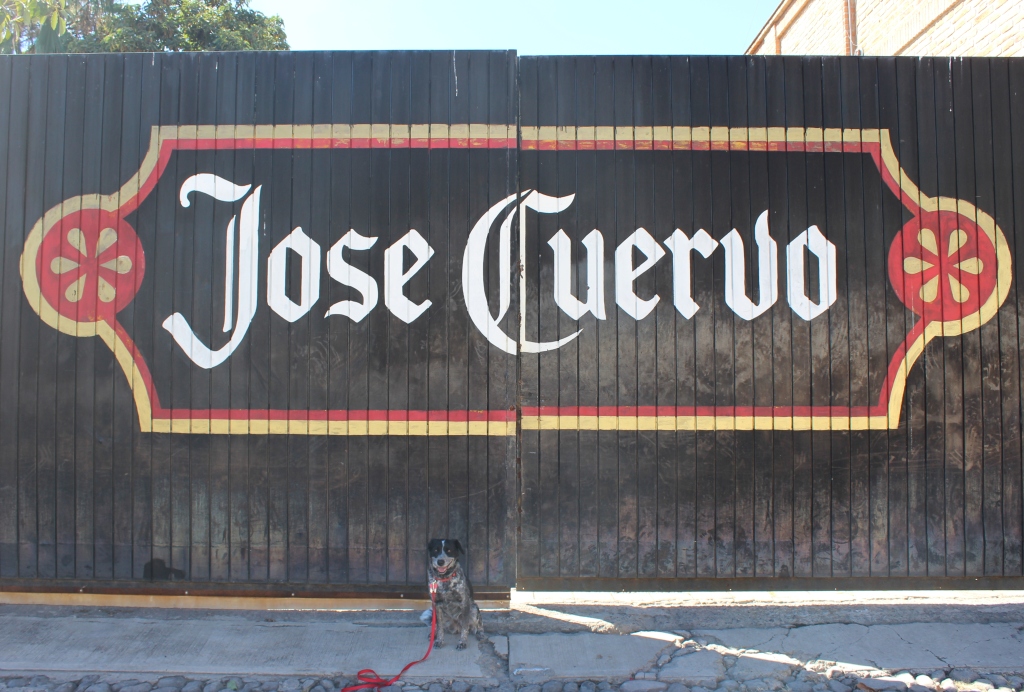 So assuming mass producers of liquor aren’t just suckers for puns, why are the world’s top tequila brands right on top of each other in the small town of Tequila? Well, similarly to bourbon, which is defined legally in part by the location of its production, tequila, by Mexican law, can only be produced in the state of Jalisco and a few other limited nearby areas. The town of Tequila was actually not even formally established until a century after Spaniards began distilling agave (which the Aztecs had been fermenting for decades) into tequila here in the 16th century. The prevalence of agave growth in the area plays a large part in the region’s role in tequila’s definition, but of course, there is also a long and very interesting history that I could not do justice to here. Next time we pass through, we will most certainly be taking some tours and then can write you a thesis on the fascinating particulars I’ve excluded for lack of knowledge here.

As I shared with you at the beginning though, Tequila is more than just the spirit whose name it bears. The town is a happy, lively, yet relaxed center of activity as well as, understandably so, a vacation spot for Mexicans.  The streets of the centro are lined with small shops, tequila dispensaries, and restaurants. Here we discovered wonderful papas at a tequila shop, which are simply potato chips doused in a combination of hot sauces and lime juice for 15 pesos ($1.20 USD) per serving. They are exquisite and in my opinion, enhanced by a side of fresh avocado. The square, or Plaza Principal, surrounds the main parish church, Our Lady of Purísima Concepción, which going on 300-years-old is quite a site to behold. It’s two-level stone facade and bell tower demand reverence, and the calm ambiance of the front square seems to say that visitors understand. This is not unlike the mood of respect you feel in much of the town for a place, a plant, a history, and a culture that have developed sustenance for its people. In Kansas, there is corn. In California, there are grapes. In Kentucky, there is bourbon, and in Jalisco, there is Tequila. 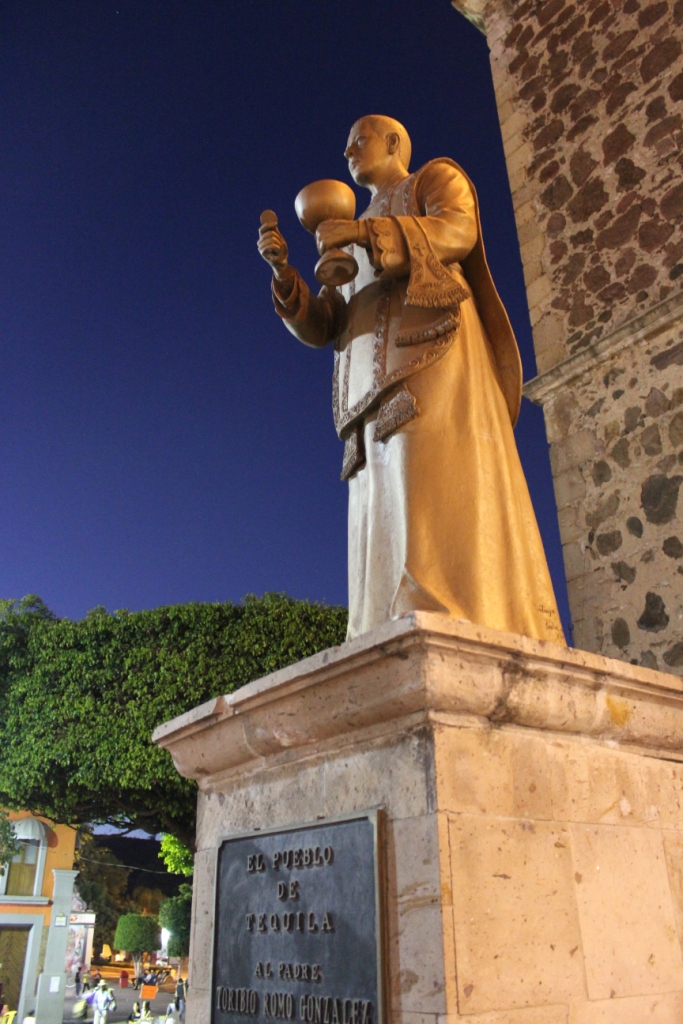 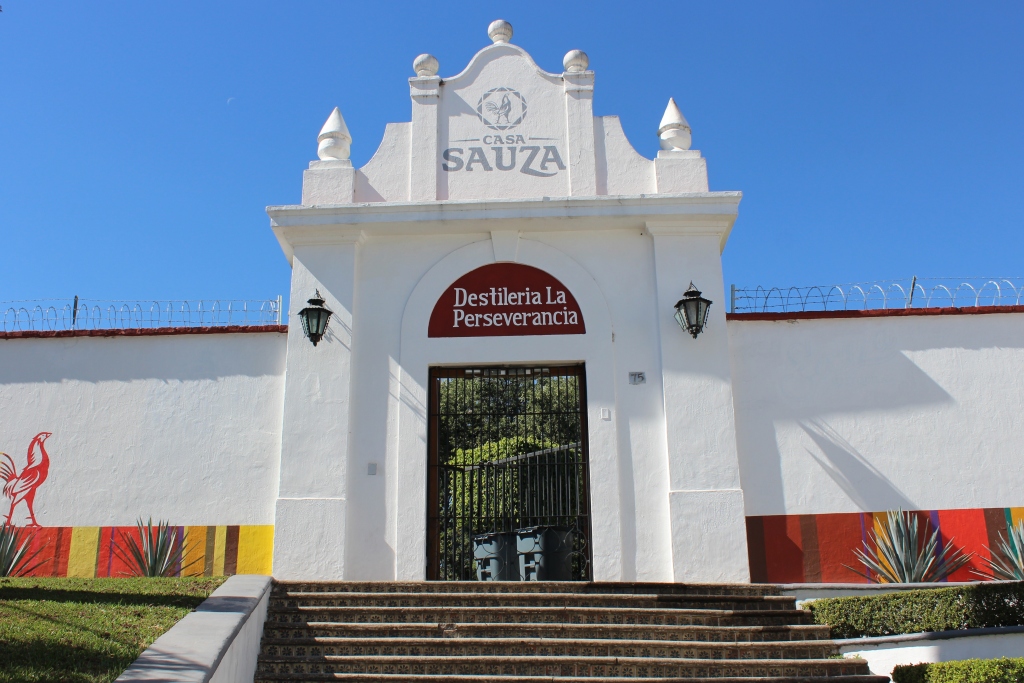 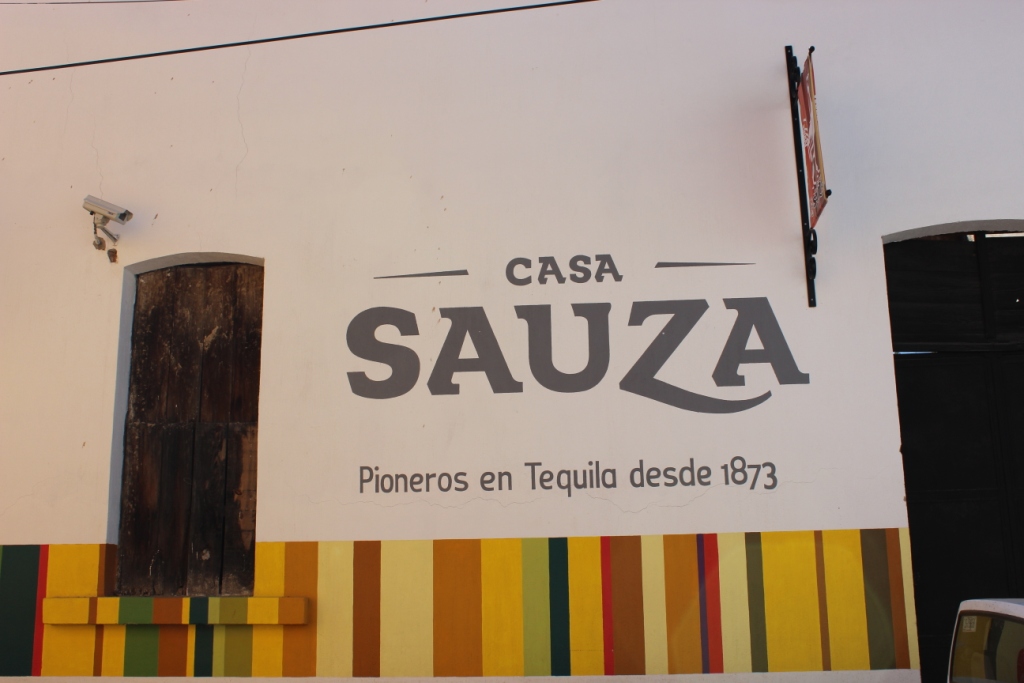 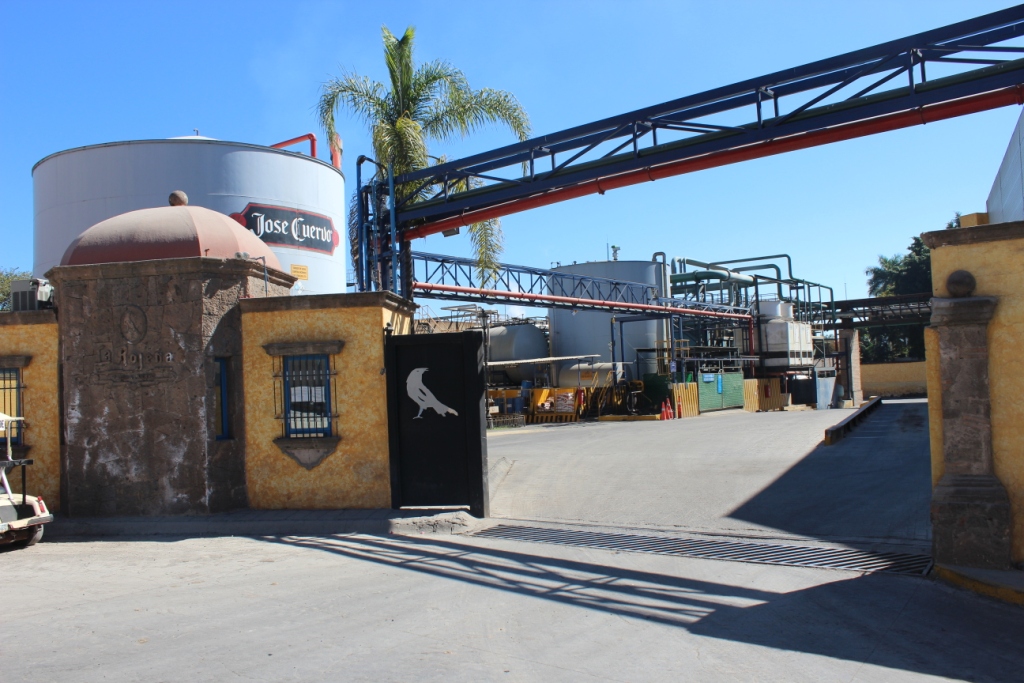 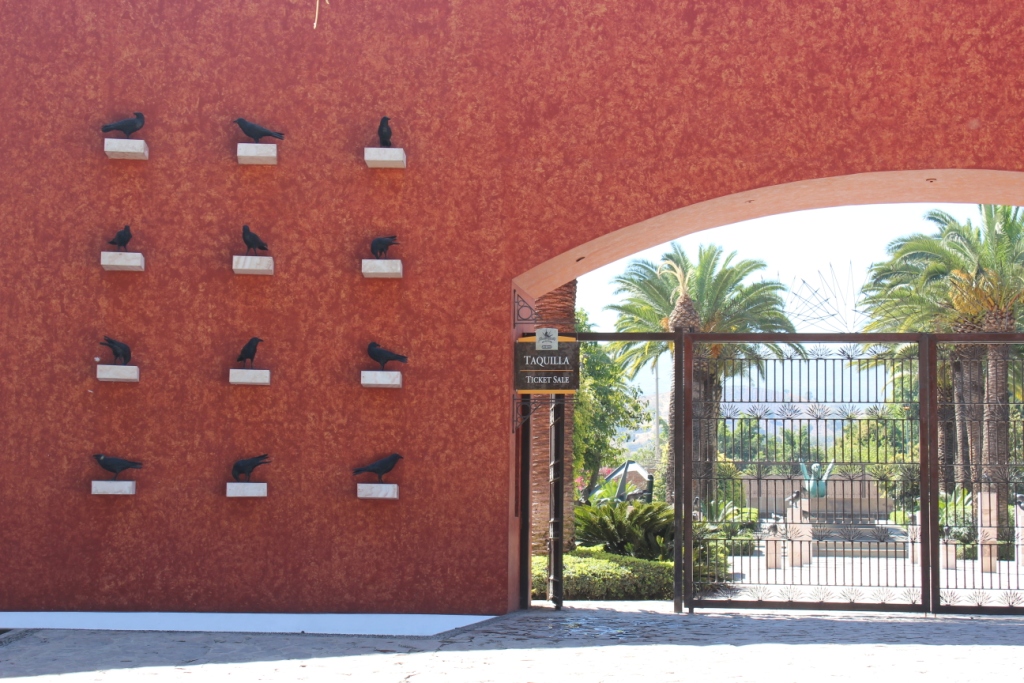 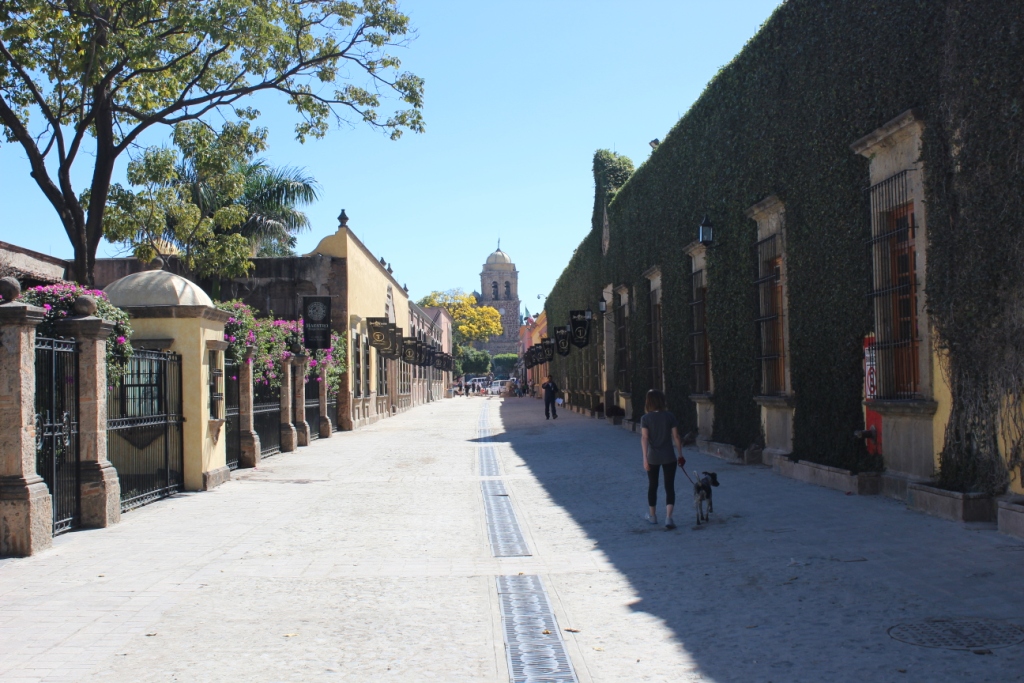 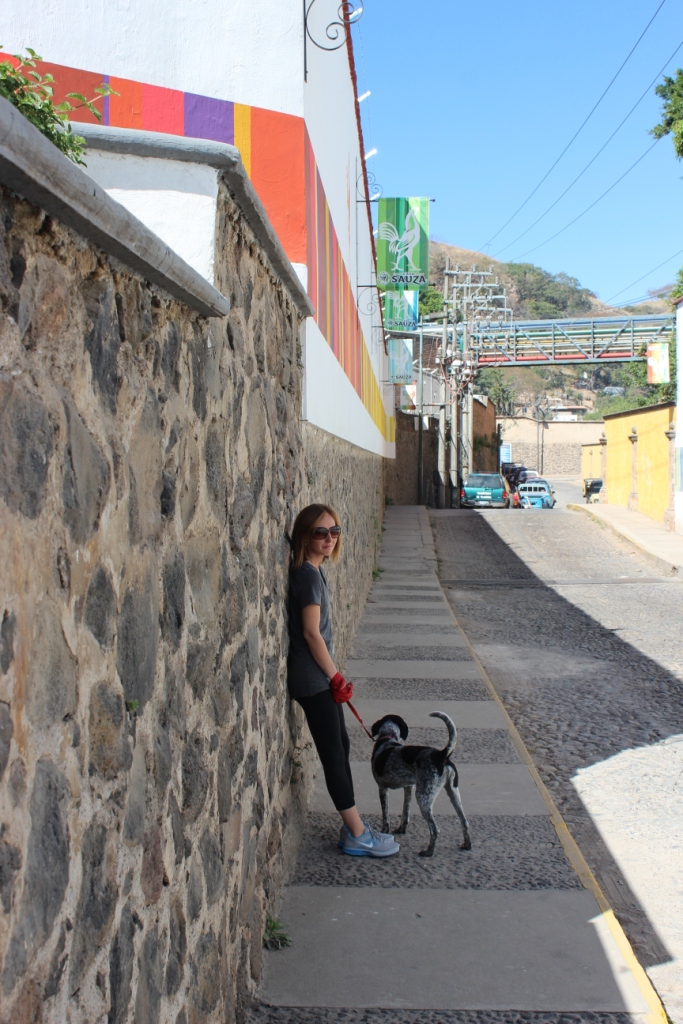