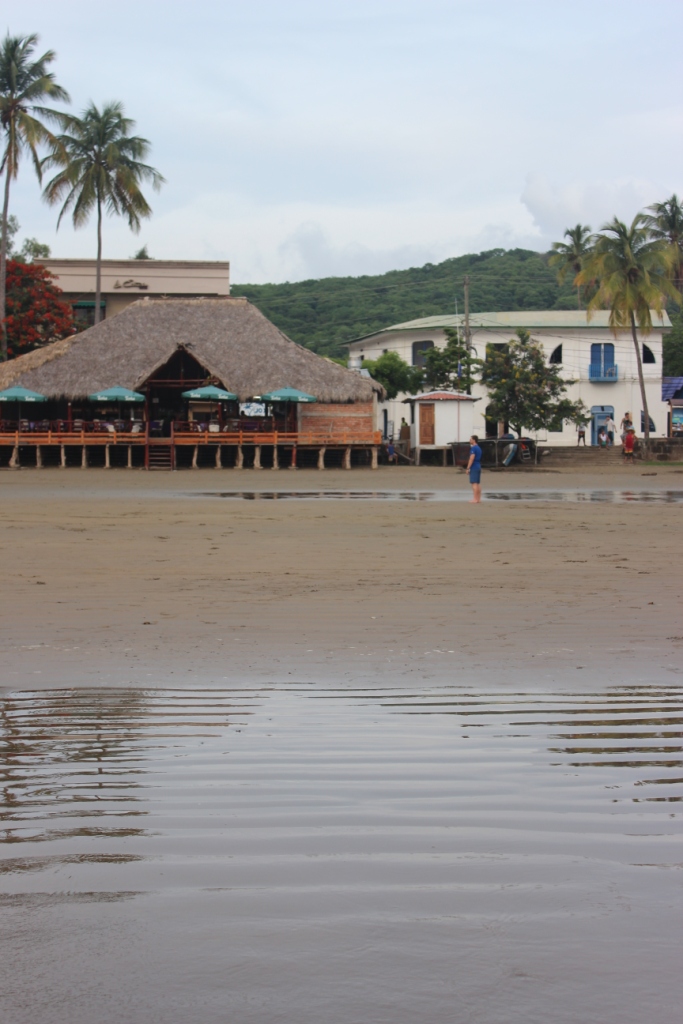 San Juan del Sur is first and foremost a fun town. A fishing village at its roots, SJDS (as it is often shortened) was a popular stopping point on the maritime route to the California during the gold rush. It has since grown to just under 20,000 residents, and the local economy is based largely on fishing and tourism – it has become a popular spot on both the luxury and backpacker circuits, as well as weekenders from the capital Managua two hours away. The town itself sits on a fine black sand beach abutting a crescent-moon bay with a cliff on each end – the 24-meter tall Christ of the Mercy statue looks and points southward overlooking SJDS from the north end. The centro is very noticeably geared toward tourism, yet the buildings retain a colorful and authentic feel. With two main things to do, beach and party, SJDS has a laid-back and relaxed atmosphere, making it very easy to get caught up in the experience. It’s a place where a two day stopover can turn into a two week long blur. Our plan had been to keep our four days in San Juan del Sur low-key, but as we walked the streets after unpacking, la hípica marched right into our laps.

Often a celebration to open or close a festival dedicated to a town’s patron saint (in this case, John the Baptist), a Nicaraguan hípica is a traditional horse parade. As we walked towards our apartment, a crowd of people had gathered along the streets of an intersection. The reason? A line of brushed, braided, and ribboned horses dancing (that’s not figurative language – the horses actually dance) through the streets ridden by proudly dressed people from the region. Everyone around us was smiling, taking pictures, and drinking Toña. We can’t really just walk back home when this is going on right? So sure, hey, why not. Let’s have a Toña. What’s that? They cost about a buck? Super. 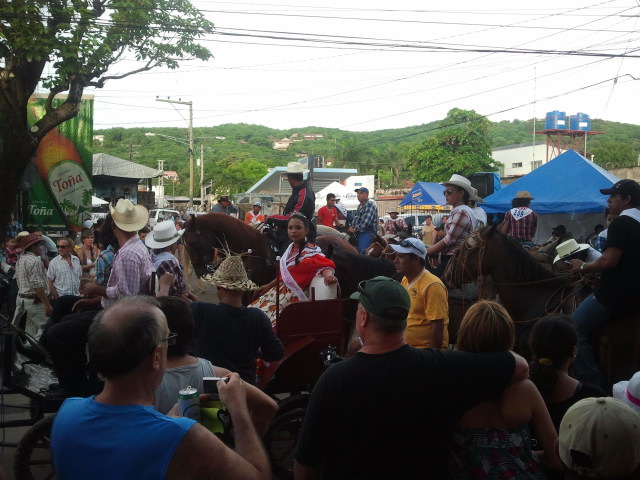 Our lodging in San Juan del Sur was at La Terraza, a three-story guesthouse near the center of town, where we had rented the first floor garden apartment through Airbnb. The apartment’s top three attributes were definitely its location, its open feature, and its rooftop terrace. And the water pressure. Top four I guess. The main room was open to the outdoors via the back wall which did not have a ceiling. On multiple nights rain soothingly fell directly into the living space, bringing the air to life and offering the “indoor” plants a drink. In addition to the private space we’d rented, we were given a key to the rooftop terrace which afforded us views of the ocean, the town, the neighboring Parque Central, and the vividly green surrounding hills all from a single, quiet, lovely vantage point. Everything was within a few blocks and walking through town was such a joy that we didn’t move our car once. Perhaps the only snafu in our lodging during the week was on us. On our first morning, a pre-coffee Ian was struggling to get the stove to boil water for his cowboy brew. He kept trying the gas and trying the gas, but no luck. The internet wasn’t working either so we were about to hit the road to find a cafe when he gave it one more shot. The stovetop exploded. Yes, exploded, Okay, maybe a little drastic with my vocabulary choice there, but that’s how it looked to me. What Ian had thought he’d seen in his early morning stupor was a glass top stove. It was, in actuality, a glass cover of the regular stove, and though we aren’t in full agreement as to what chemically and physically transpired next, my take is that he had trapped so much gas underneath the lid that it finally just blew, spraying small pieces of glass all over the kitchen. Not our best moment as renters. Lucky for us, our hostess was very graceful about it, and working together to get it fixed has been about as great as we could have hoped for. 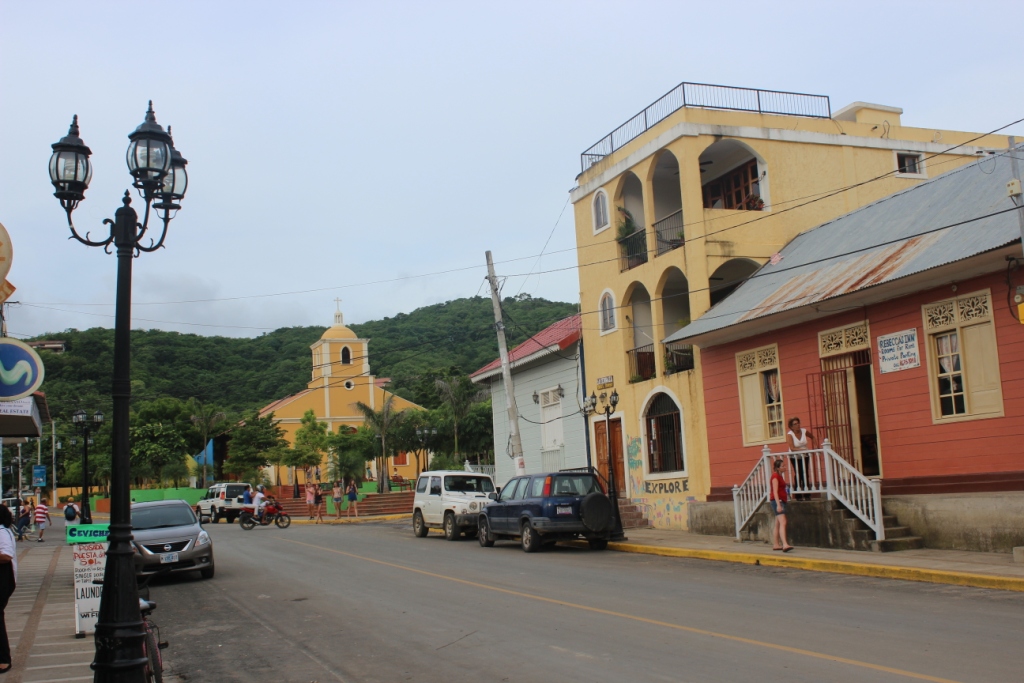 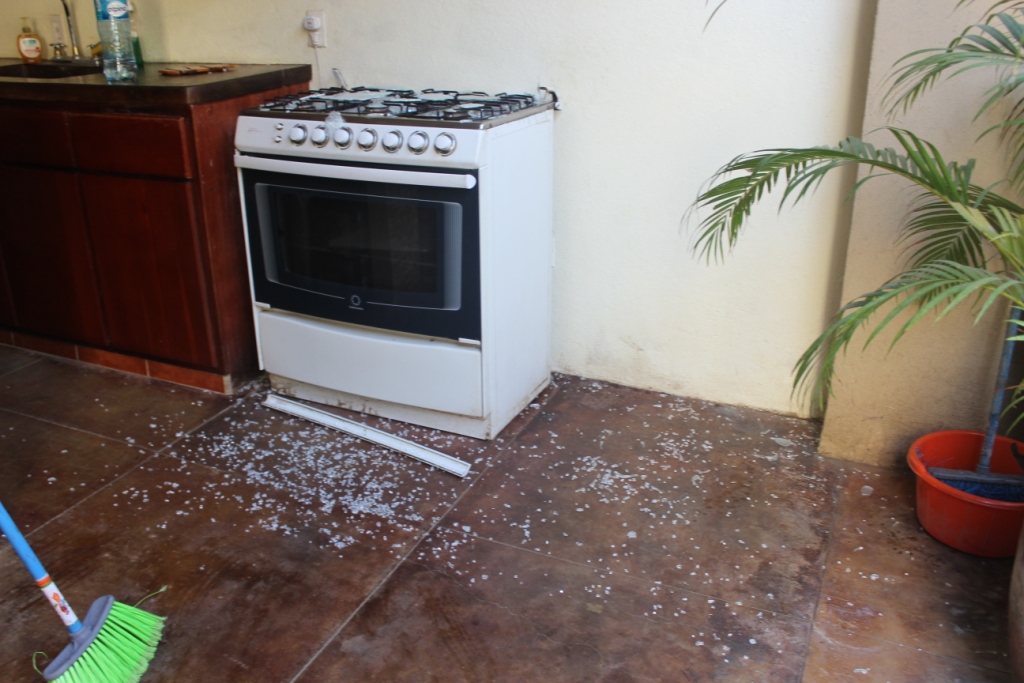 Three out of our four nights in San Juan del Sur we ate dinner at the same restaurant. Walking without purpose through the streets of town on the second evening of our stay (Ian pretty hung up on tracking down a breakfast burrito), we were, as often occurs in restaurant districts, offered a menu by many staff members at multiple establishments, most in English and all with a suggested dish they thought might entice us. The one that eventually drew us in to sit down though was just a chill guy behind a bar who caught our glance as we looked inside. “You won’t be disappointed,” he offered casually. We rarely find ourselves disappointed anyway so that wasn’t much of a meaningful argument, but in we went to meet the crew and disappointed we were not. The place was mostly empty, shabbier than the other nearby joints, but beach front and comfortable. They had breakfast burritos and Toña and Stu and a breeze. Their tacos especial were so delicious that we returned for them every night until we left the country. One evening a storm was rolling in, and lightning bolts so stark and strong that you’d think they belonged in a mid-summer Kansas thunderstorm struck the dark waters for an hour. It was our spot. 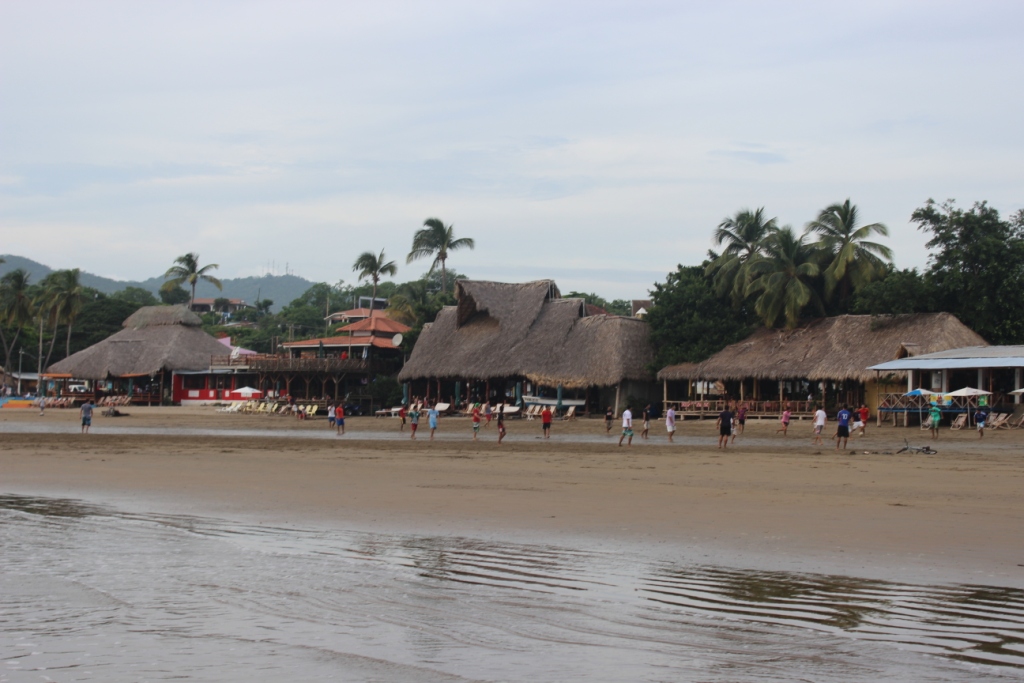 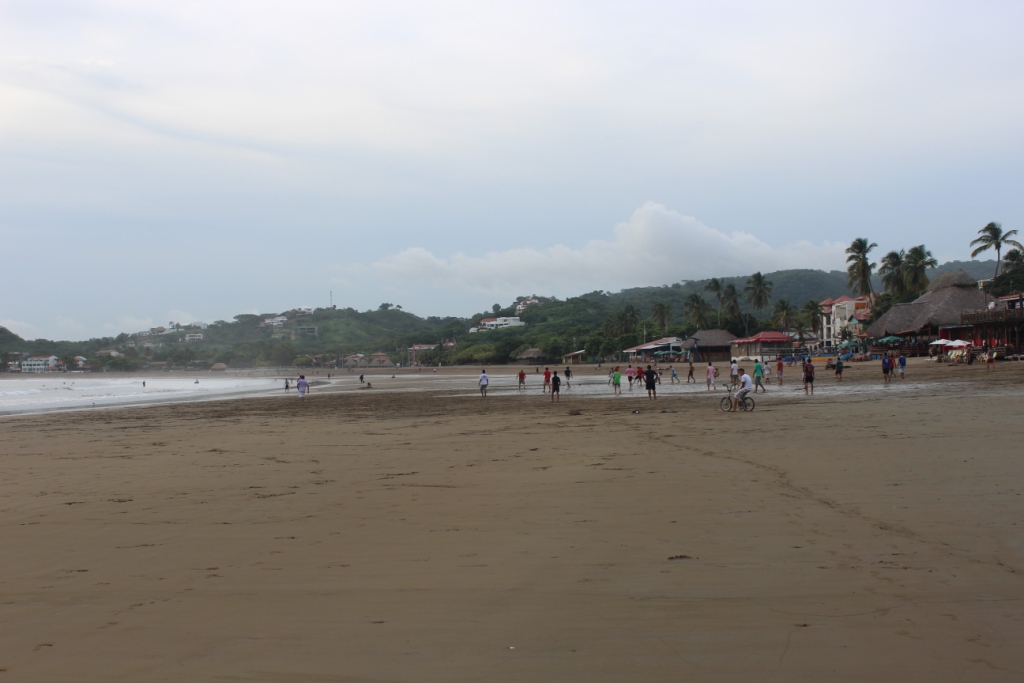 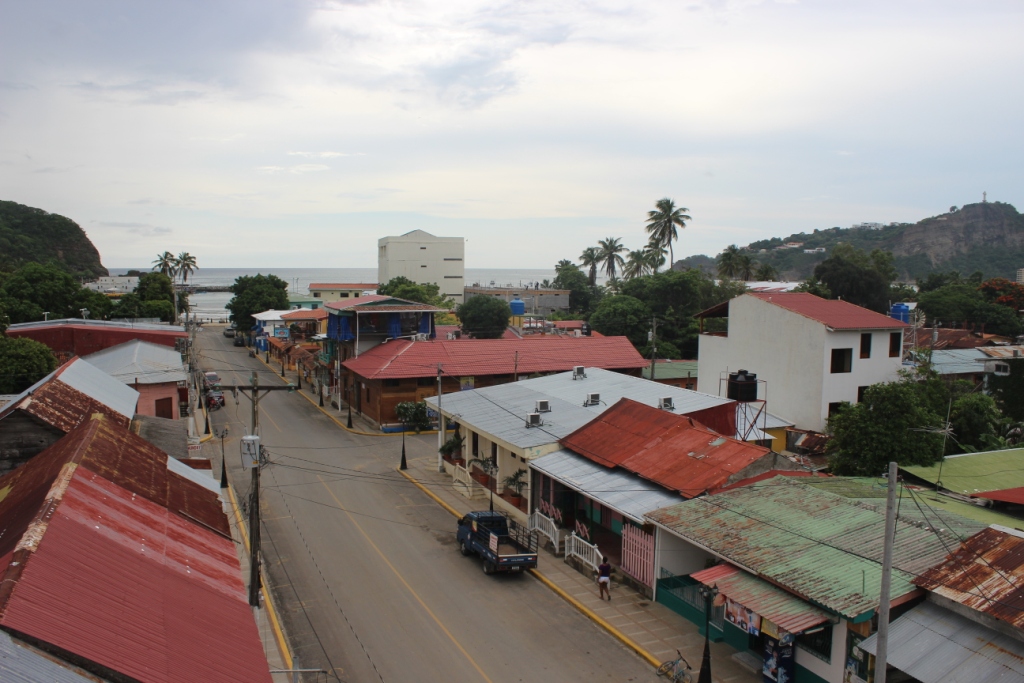 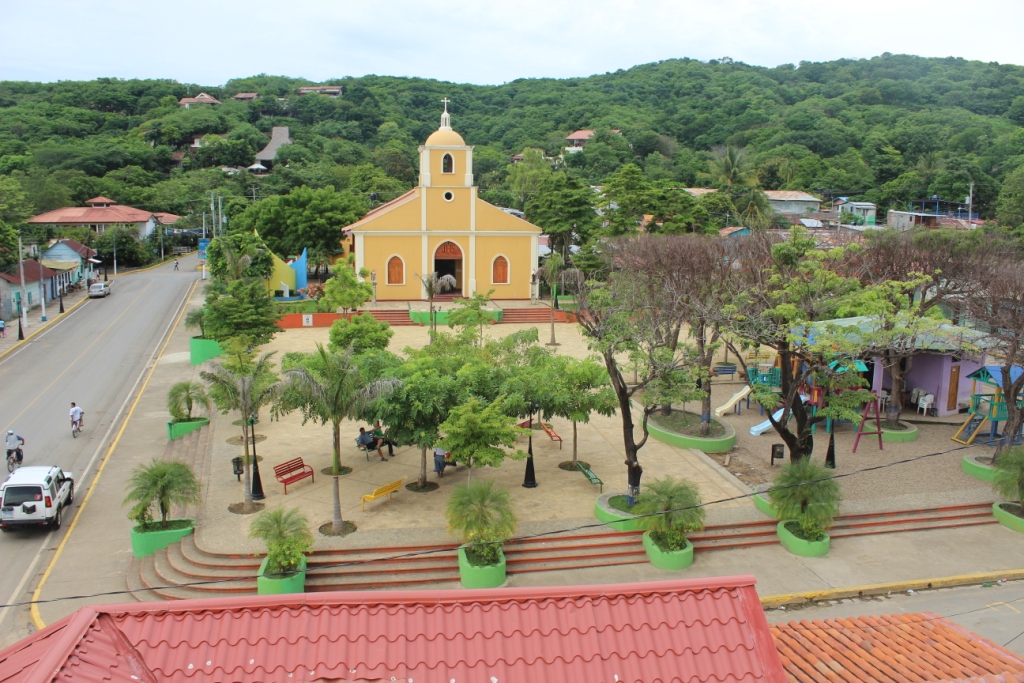