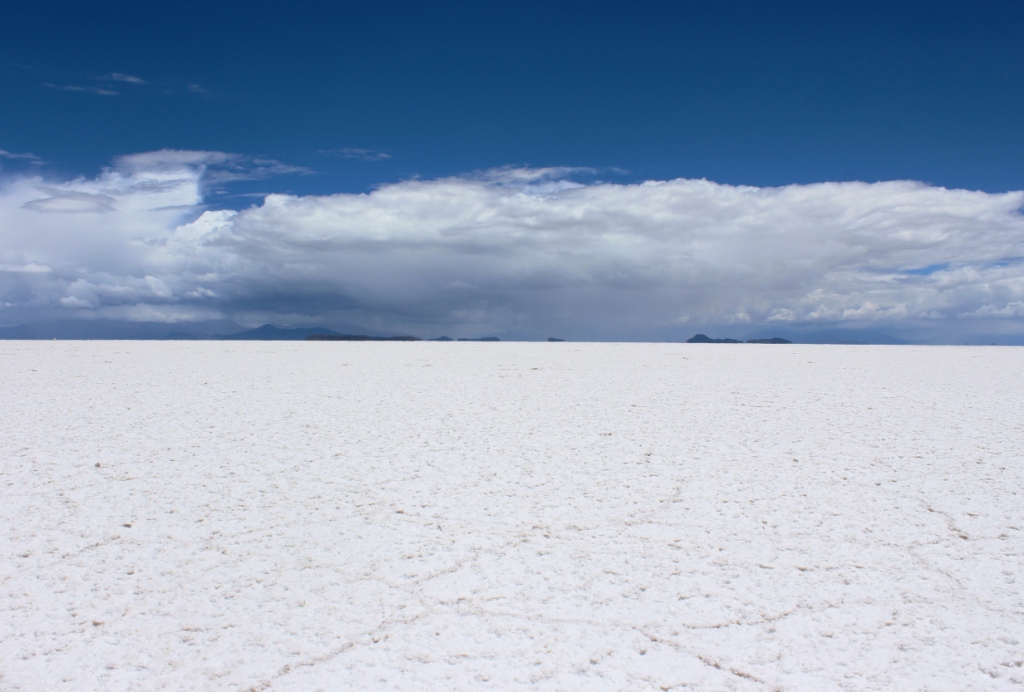 The star of Bolivia’s famous Southwest Circuit, Salar de Uyuni is, quite simply, the world’s largest salt flat and by far Bolivia’s most important tourist attraction. Located 11,995 feet above sea level, it is over 4,000 square miles of pure flat whiteness, punctuated in only a few places by “islands” of rock and cacti. Formed from the remnants of prehistoric saline lakes, Salar de Uyuni consists of several meters of salty mineral crust overlaying a pool of brine. Some interesting facts:

We packed up the car early on the Monday before Christmas to make the drive to Salar de Uyuni. Not entirely sure how long to expect the drive to be — newer reports indicated the highway was freshly completed and made it a quick jaunt of four hours so we were hopeful — we were prepared to spend a night camped out in the CR-Van on the salt flats or at an overpriced hotel in nearby Uyuni. Armed with PB&J materials, plus cookies and crackers out the wazoo, we had filled up the gas tank the night before (not always an easy thing to do with a foreign license plate in Bolivia). The route turned out to be a breeze; the landscape was rugged but beautiful and the road was indeed almost new. Less than three hours later we were descending from the mountains onto the wide plain with the town of Uyuni in sight. We knew the road led north of town to the outpost of Colchani, but finding said road is easier said than done when there are no street signs. Eventually we found what looked like a tour operator to follow and perhaps fifteen or twenty minutes later we finally saw a sign directing us toward Salar de Uyuni, and followed the example of the driver in front of us who stopped at a trailer beside the road before venturing onward. Inside I registered our vehicle with some sort of official and paid him a fee of 5 Bolivianos (we aren’t sure if this is an official fee or not, but at the equivalent of $0.72 didn’t feel like putting up any fight). And with that we were off, driving past a salt hotel before pulling finally pulling onto Salar de Uyuni itself.

The first quarter mile or so was covered in six inches of water. After that it was point the car due west, find some tracks to follow, check the compass every few minutes, and hope we hit our target of Isla Inkahuasi, one of the islands near the center.  The landscape was obviously quite surreal. It has been endlessly described as being like something from another planet, but that description really is accurate. With no traffic, no speedbumps, no pedestrians, really nothing else to worry about hitting, I was free to essentially be a passenger and stare out the windows during our hour-long cruise.

By some kind of miracle we hit our target directly. Pulling around the far side of Inkahuasi, we saw a handful of Land Cruisers parked near the island with several groups eating lunch on a row of picnic tables or simply hanging out. Wanting to give the dogs a chance to stretch their legs we decided to park the CR-Van a few hundred feet from the island where hopefully we would be far enough away that Maya wouldn’t feel the need to bark at everyone. They jumped out onto the hard crust and started doing their dog thing while we stared at the horizon. After a few seconds of zoning out in the nothingness, I turned around to look back toward Inkahuasi only to notice TWO LLAMAS RUNNING DIRECTLY TOWARDS US A FULL SPEED. These things were obviously on a mission and we had no idea what said mission was going to be. Thinking perhaps that mission had something to do with protecting territory, we quickly ushered Maya into the car. Olmec, however, was stuck mid-piss, and a look of concern gradually crept over his face as they drew closer. It became obvious he wasn’t going to get away, and visions of stomping llama hooves flashed through my head. As it turns out their intentions were much more innocuous. Apparently they were simply interested in who these strange four legged visitors were. Olmec alternated between friendly and terrified, as he is wont to do. There was mostly a combination of sniffing and chasing, all of it good-natured, and we laughed heartily.

From there we found a quiet spot (not really hard to find out there) to have some lunch. Deciding that since the ride out had only taken a few hours and gone so smoothly there was no need to pay for a night of lodging or spend an uncomfortable night in the car, we slowly trekked back toward the town of Uyuni aiming to make it all the way back to our casita in Potosí that same evening. Stopping to take some obligatory perspective pictures and drink a bottle of wine (oops), we admired some rain bearing down the the western edge of the flats. We made sure to get a thorough car wash in Uyuni (50 Bs or $7.24), as the crusted salt is horrible for the underside of your vehicle, before hitting the highway back to Potosí, dodging llamas the whole way. 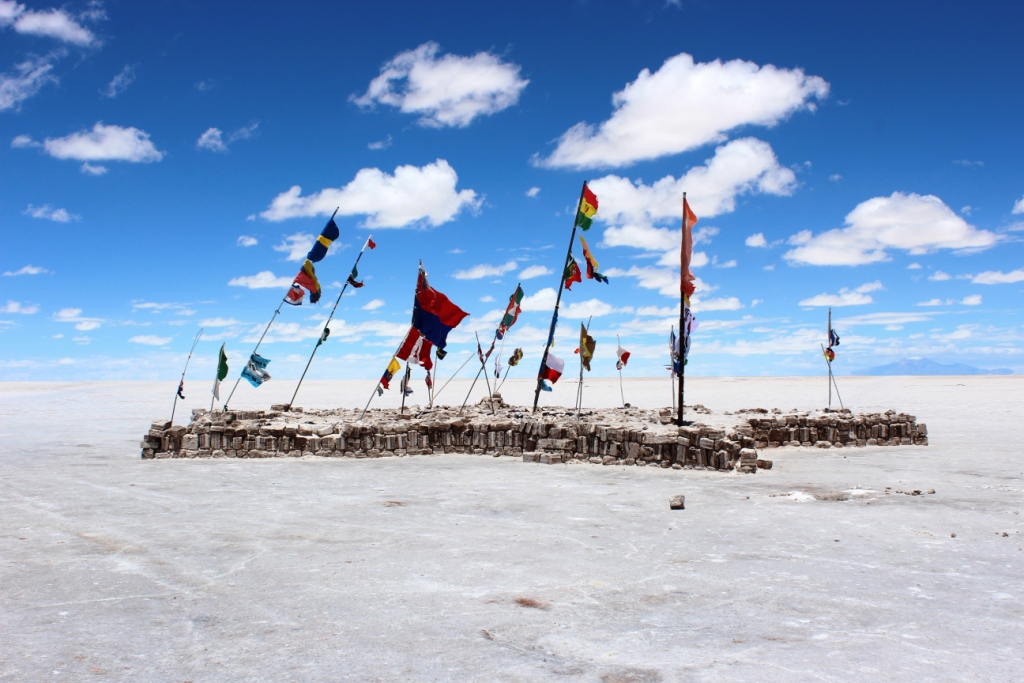 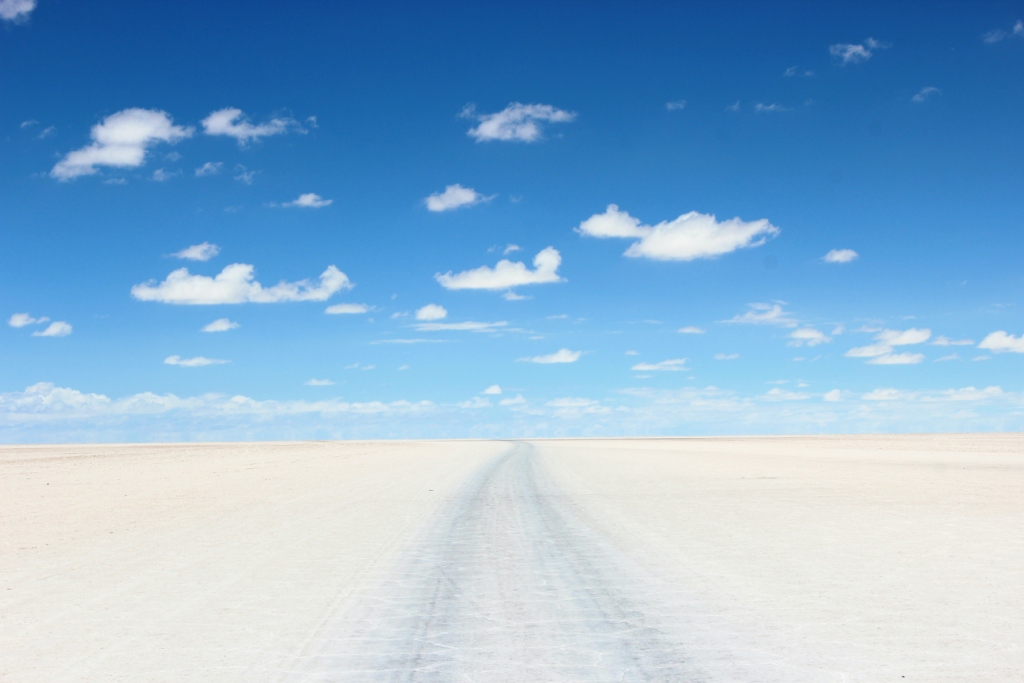 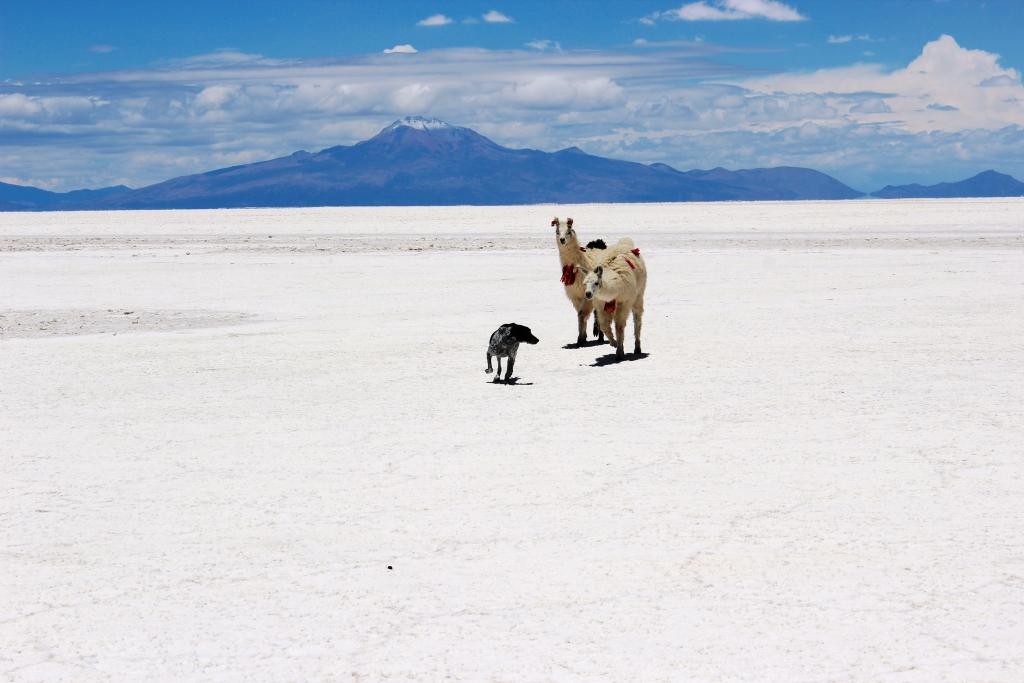 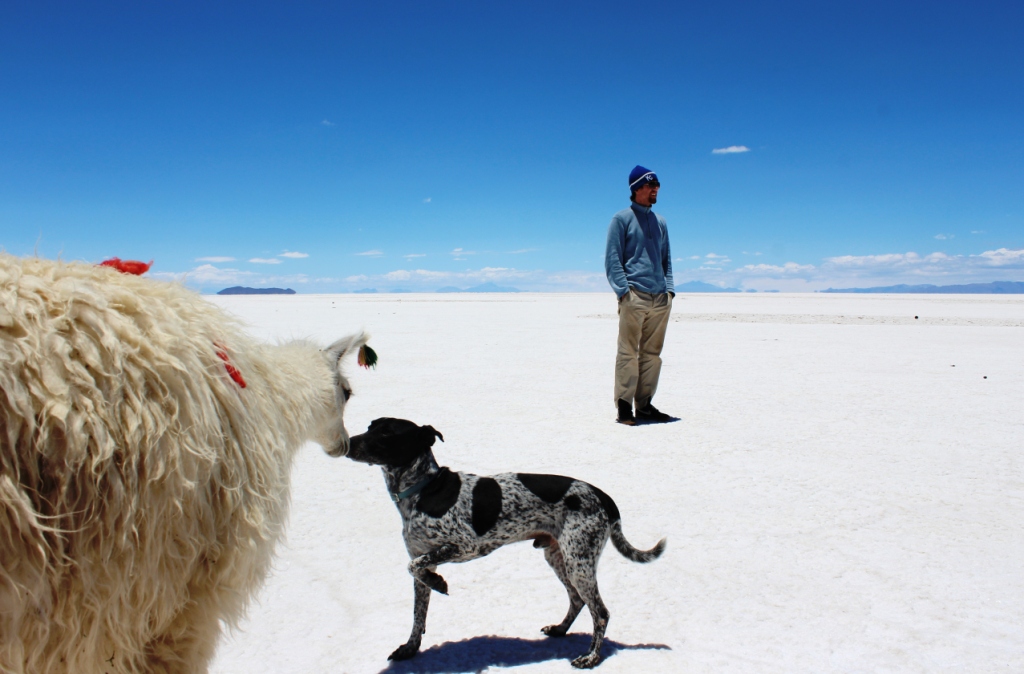 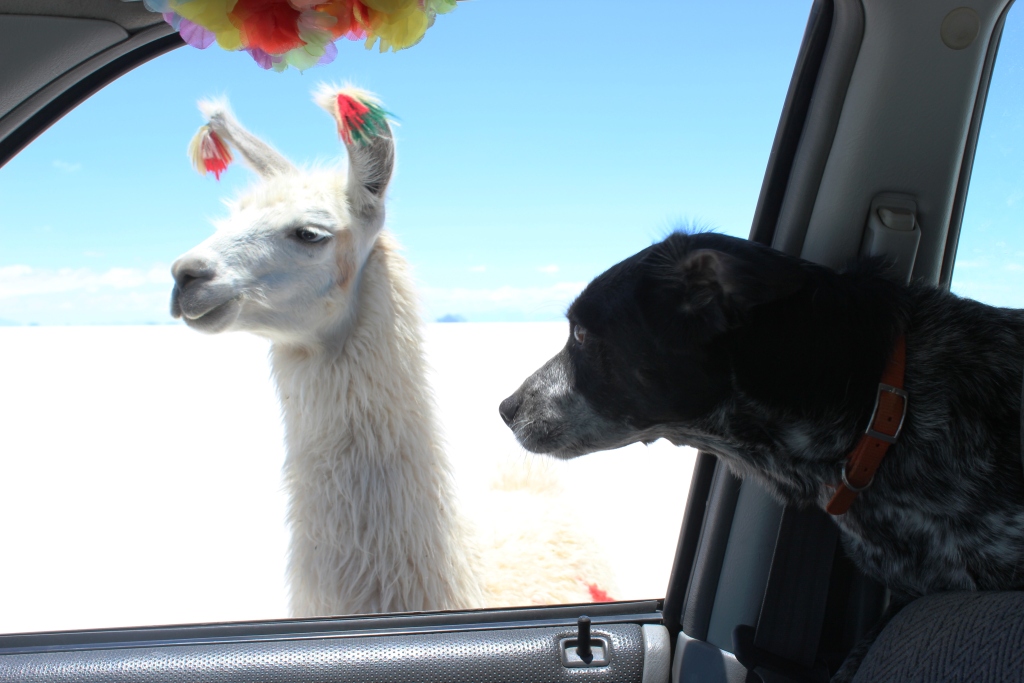 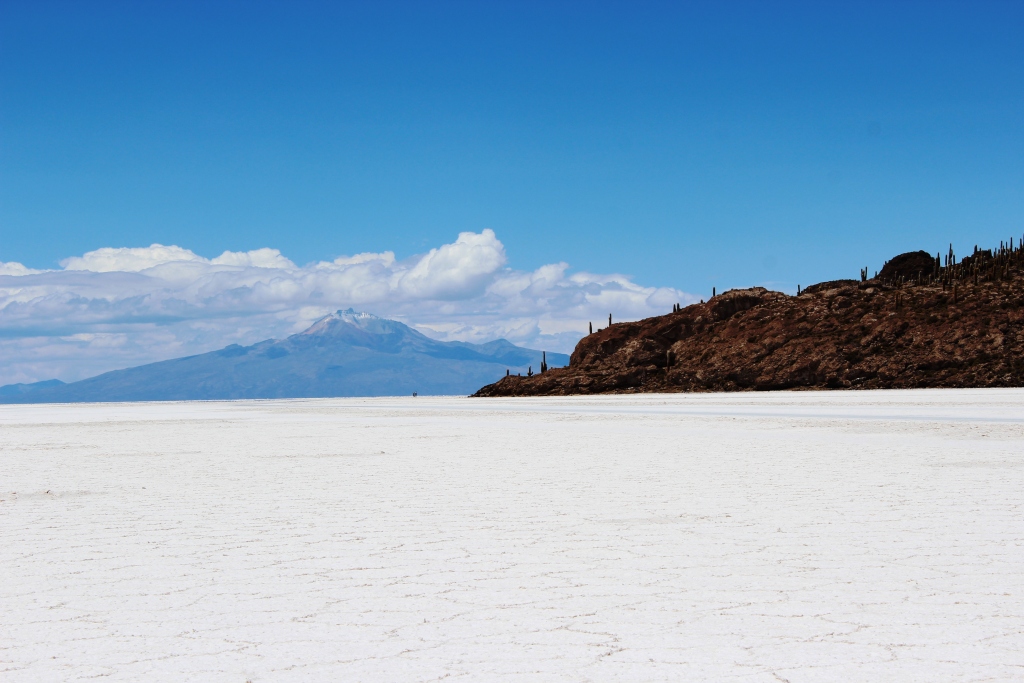 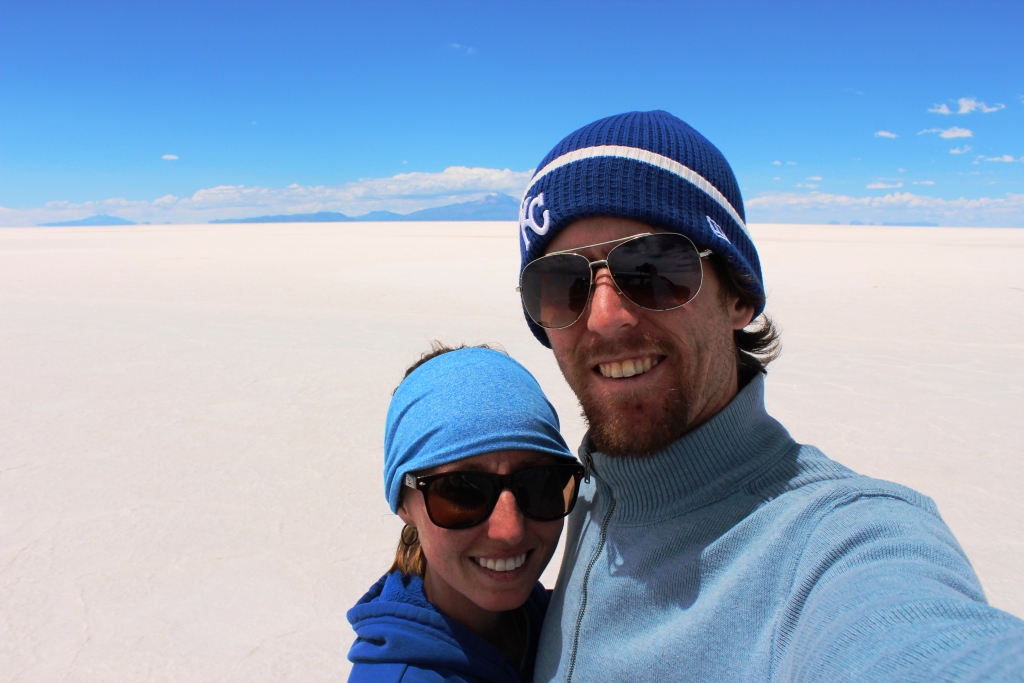 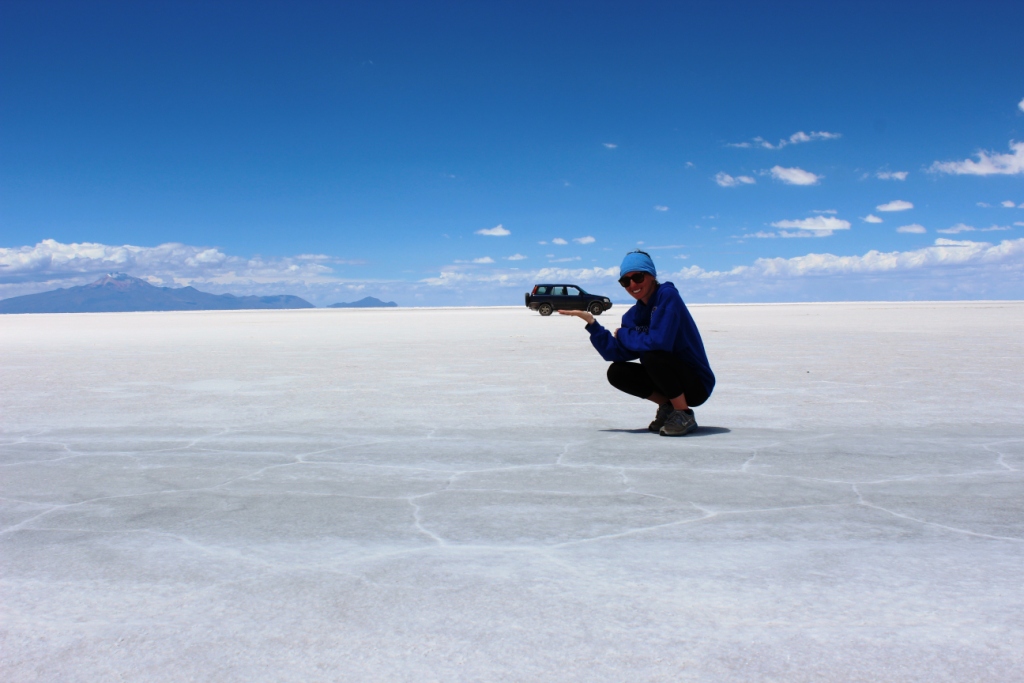 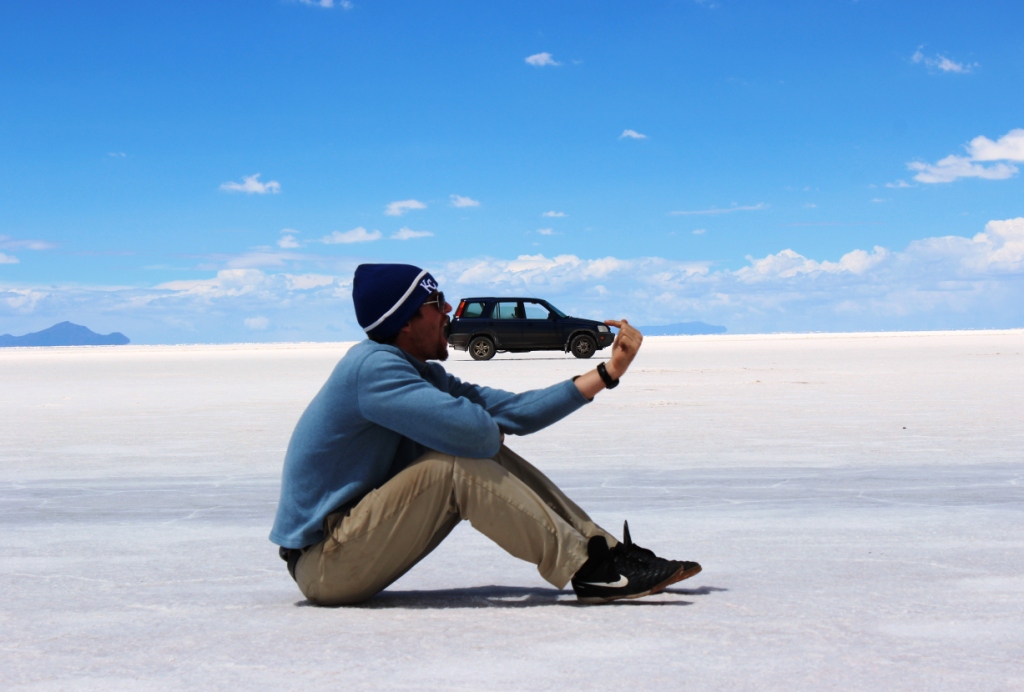 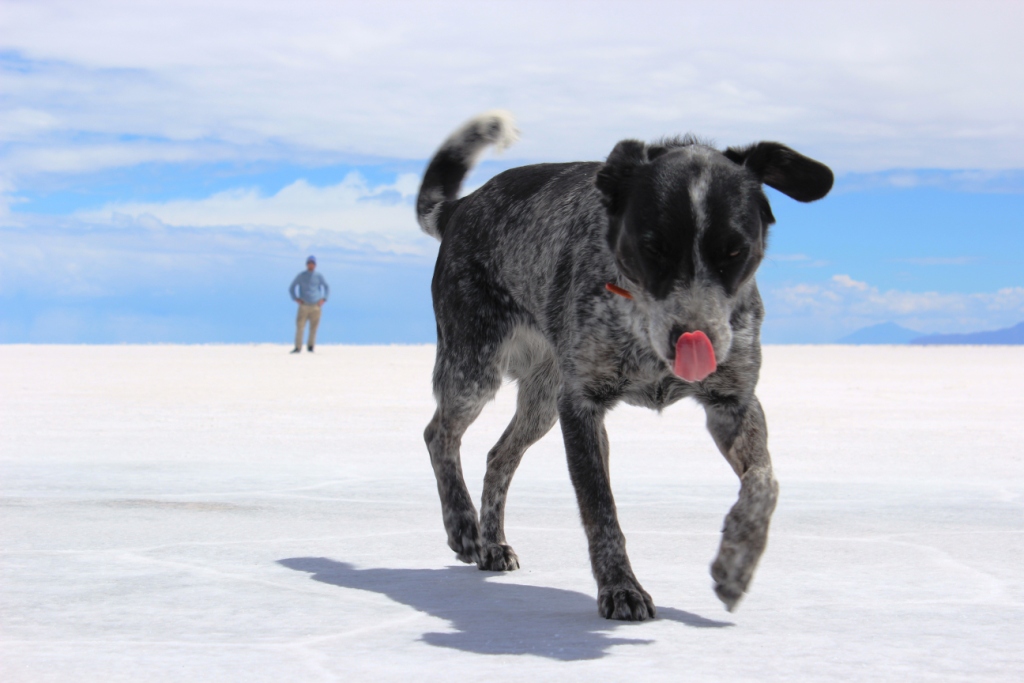 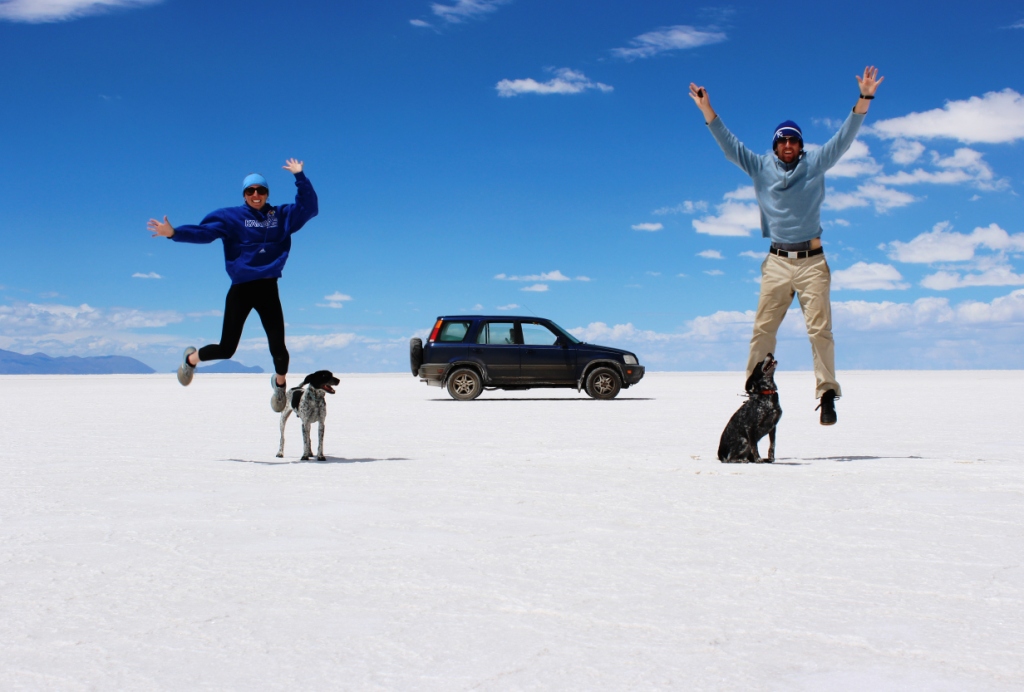 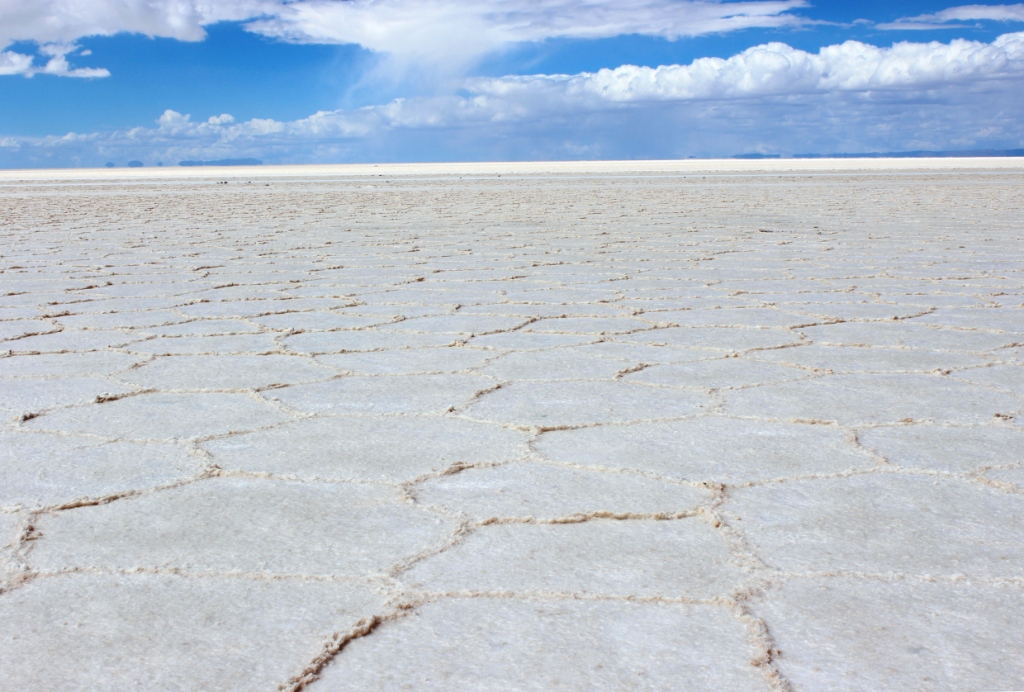 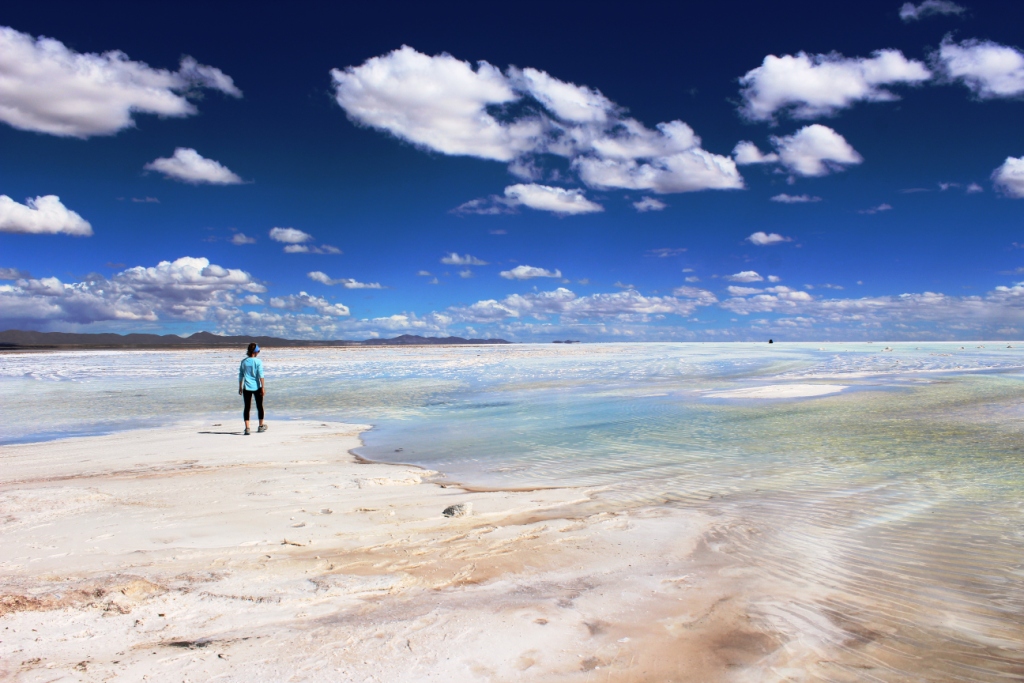