Food is a fantastic way to explore a new culture. We don’t claim to be foodies in any sense of the word and seldom seek out the most exquisite or famous flavors of a city (unless you count pizza and beer), but we do enjoy experiencing authentic food and especially love a good típico breakfast. In Mexico, we devoured chilaquiles and papas, in Guatemala we chose desayunos (breakfast) no matter what meal it was, and in Honduras we ate baleadas almost daily. Here in Panama though, we were struggling to find anything that even remotely resembled local food. The most homegrown-looking establishments usually advertised Colombian food or otherwise fairly non-unique dishes, and we’ve yet to see any of the limited items we read about online as “Panamanian cuisine”. For example, the Wyndham Grand Veneto’s website describes various “popular Panamanian delicacies”, but inside their casino and hotel, they offer an Italian restaurant, a New York Steakhouse, and a Sushi Lounge – no traditional, local dishes to be found. Maybe the talk of cuisine just makes their customers feel like they’re going somewhere more exotic, or maybe I’m missing something. After asking around, we came to the general conclusion that like many other aspects of Panamanian culture, the food here is a combination of that from the many other countries that have influenced life on the isthmus over the last 150 years. That said, we’ve become quite fond of a couple of not-so-Panamanian restaurants in Panama City and find ourselves returning to them over and over. 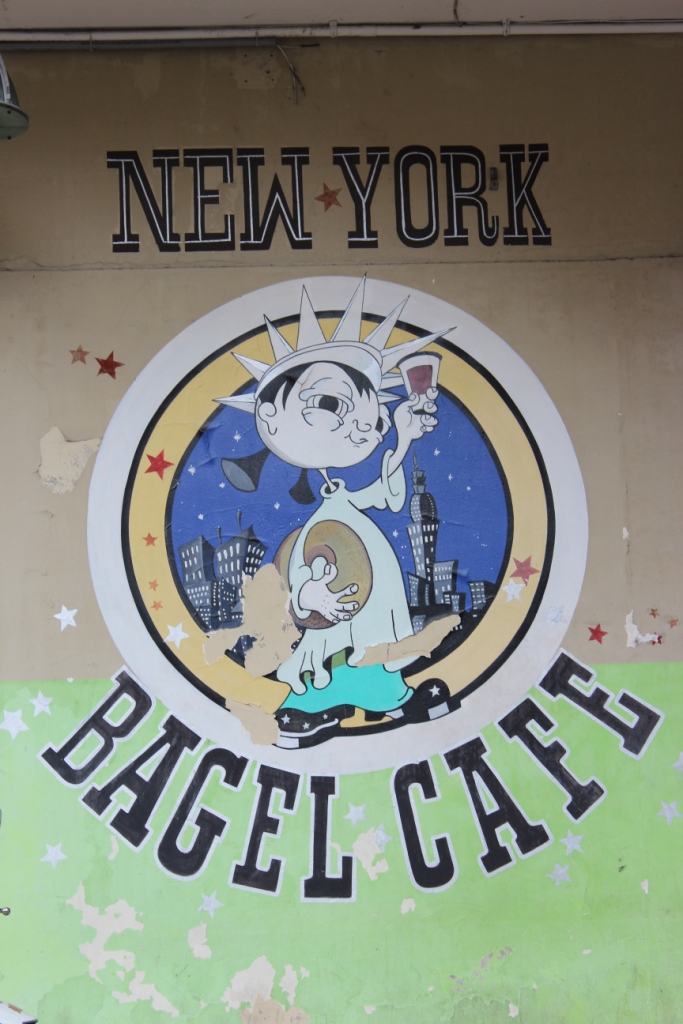 Two blocks from our apartment along our typical route for walks is the Einstein Plaza, a broad intersection in El Cangrejo with the giant head of Albert Einstein carved in stone and dropped into the middle of the crossroads with some landscaping and a couple of benches. The plaza is the address of the New York Bagel Cafe, a very American restaurant that – you guessed it – serves bagels and coffee (among other things). House coffee is bottomless; after purchasing, customers can pick their mug and keep it full on their own from a station featuring no fewer than 6 different varieties of hot brew. The cashier counter sits in front of a backdrop of assorted bagels and below a large menu board entirely in English offering breakfasts, omelets, burgers, sandwiches, and salads, and a counter in the back displays baked goods like breads and sweet treats. The generously cream cheesed bagels have been our primary undoing, but the Western Omelet puts up a pretty good fight too. Inside the large, bright cafe, wifi is free and strong despite the numerous users on it at any given time (at least half of whom are speaking English), and outside, a second story balcony allows customers to enjoy their relaxed meal overlooking the plaza. From the states, this might not seem all that unique or interesting, but it’s an environment we don’t often find these days. Sure there are coffee shops with internet and an occasional hipster-looking joint with a plethora of outlets, but whether or not its appropriate for us to post up for hours at a time is not always clear and decent bagels have been almost non-existent. And there are little things too that while we may not have even missed, certainly add to the feeling of being in a familiar place. For example, in nearly all countries we’ve traveled through since the U.S., the coffee we are used to must be ordered as “café Americano”, which indicates that we would like a full-sized cup of drip coffee rather than an espresso or similar. At the New York Bagel Cafe, the house coffee is basic black with cream and sugar available as desired.  The prices too are a bit more American, but maybe that’s just life in the city. 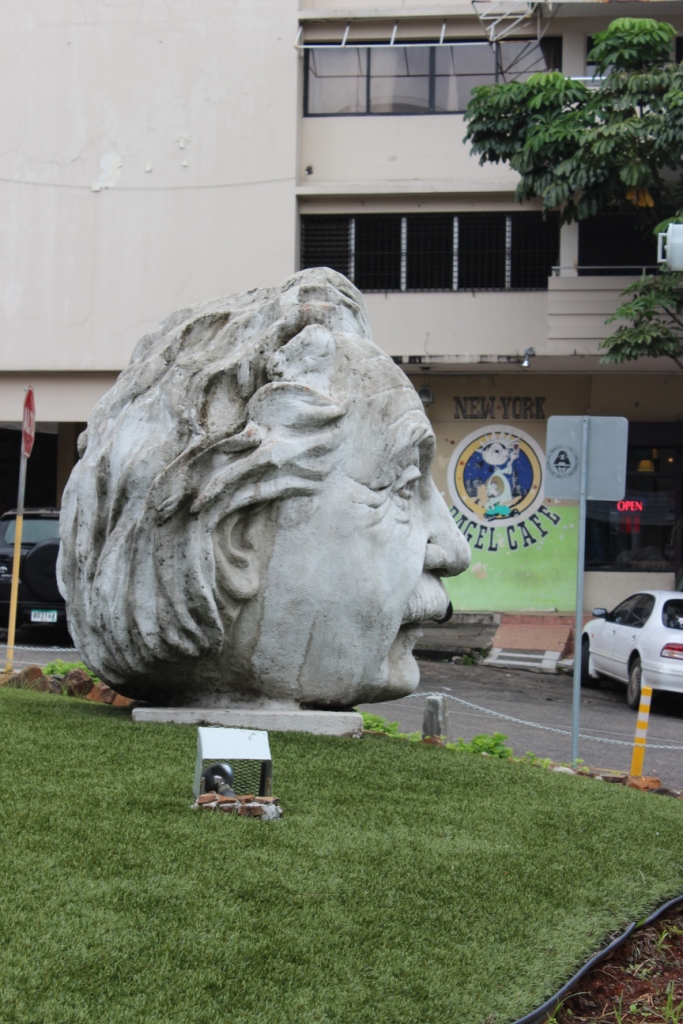 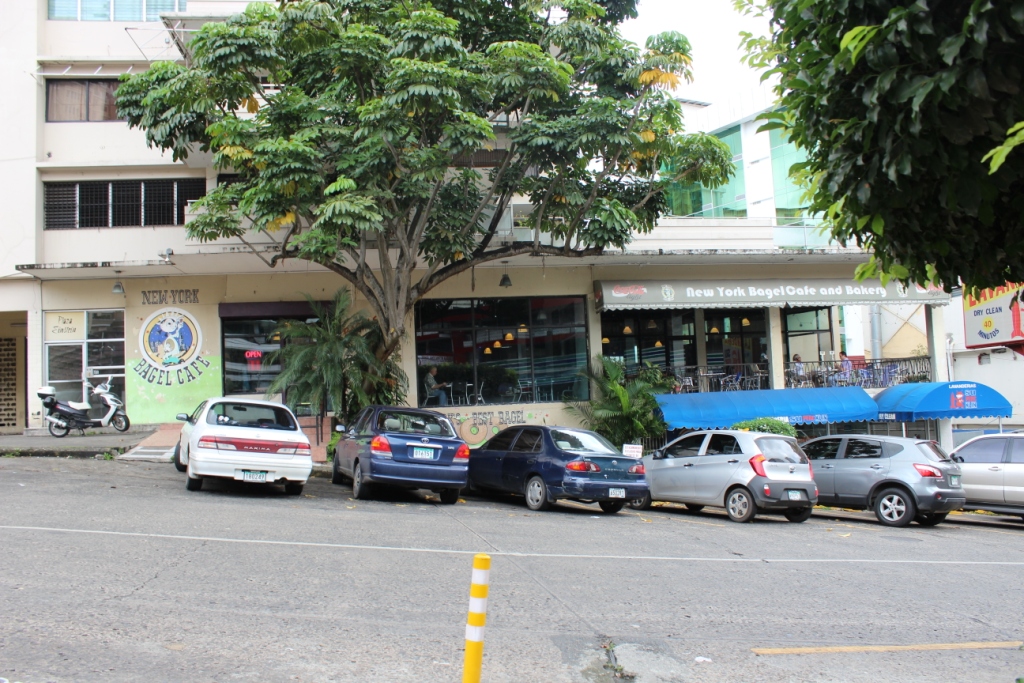 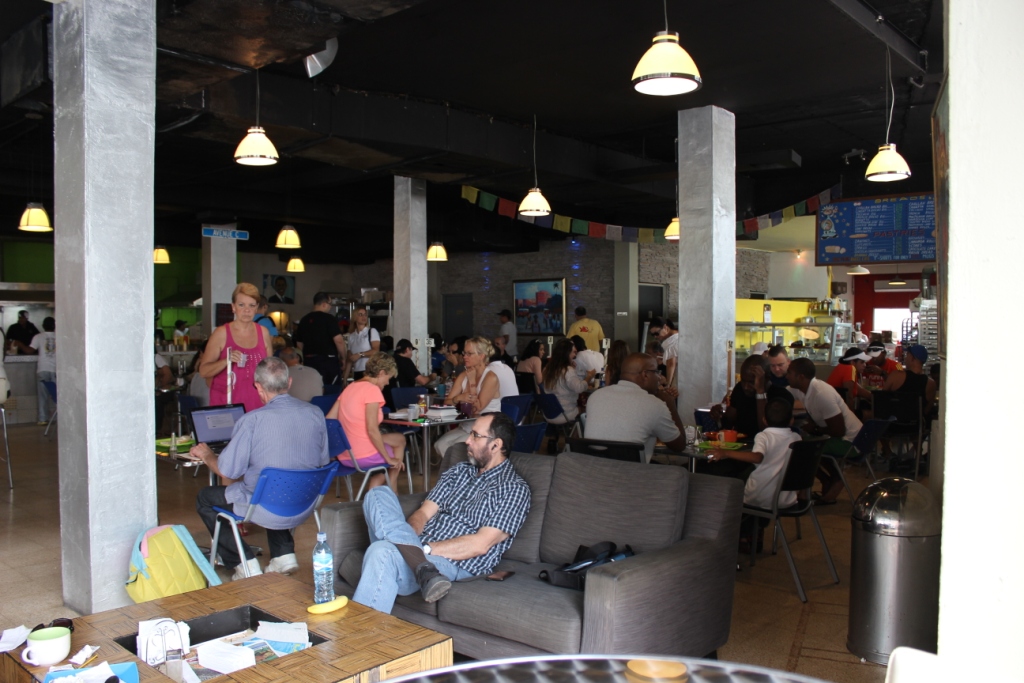 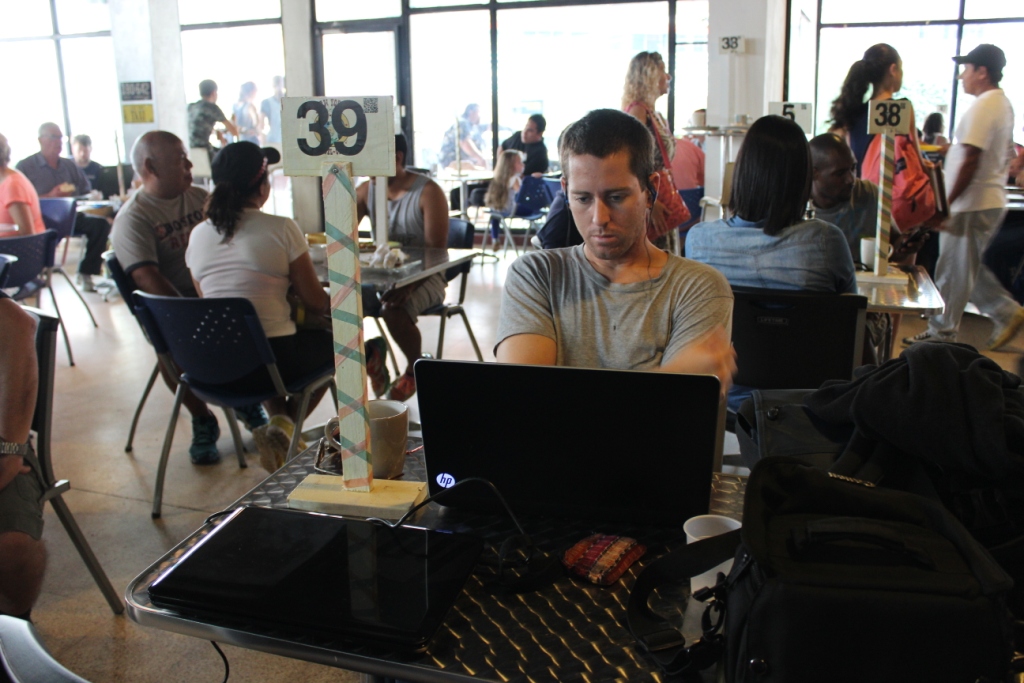 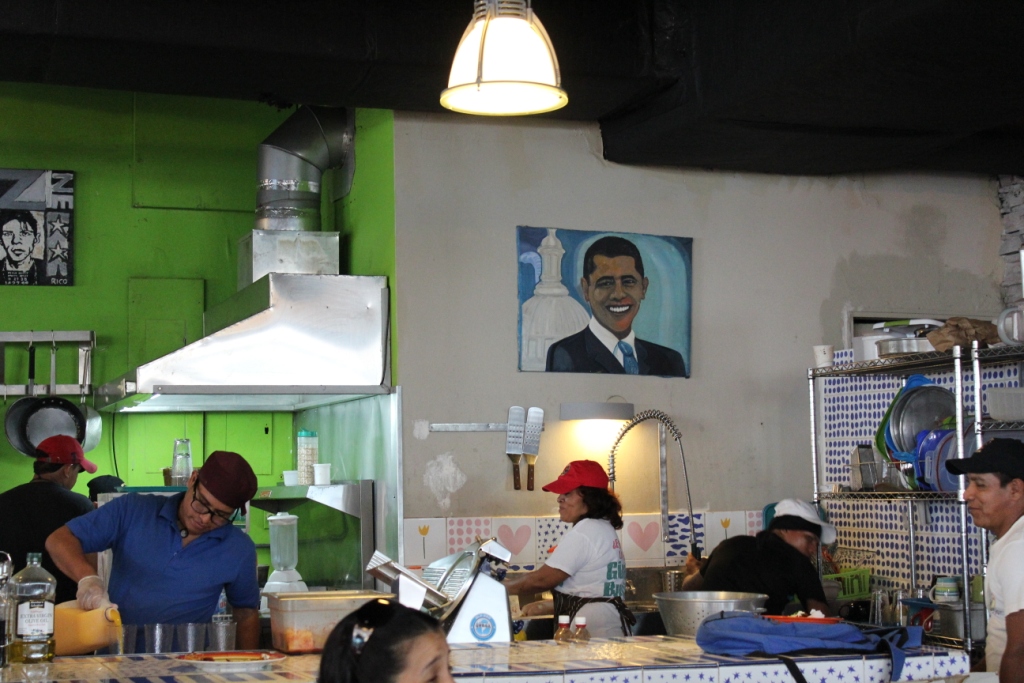 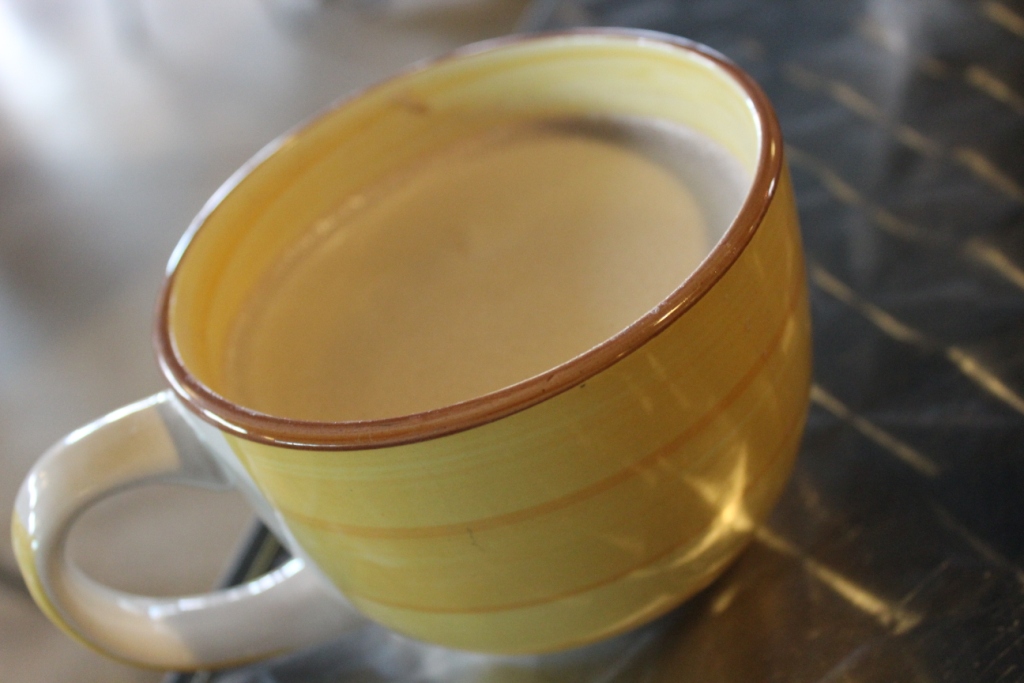 It’s only fair to be completely honest about my near-obsession with pizza before I start in on a raving review of this quaint Italian restaurant between Via Argentina and Via España. I really really really love pizza. So even though that is but a small fraction of what Pomodoro’s menu has to offer, it is a large fraction of why I love them. Ian is a big fan of the quattro formaggi; I’m all about the margherita. The personal sized pies are all thin crust and flavorful, and if you aren’t quite as jazzed about pizza as I am, the menu offers a number of classic Italian dishes as well as a create your own pasta section which allows customers to build their meal from eight different types of pasta and more than a dozen sauce and meat or topping combinations. The alfredo is superb. The only thing we haven’t loved was the house white wine, which was redolent with motor oil and boasted hints of metal, but I guess that’s kind of what you get for ordering the cheapest wine on the menu. In addition to the food, the environment of the restaurant itself is a gem. Tables are available along the front sidewalk and inside the restaurant itself, but the best seats in the house are in the romantic, but jovial courtyard out back that is shared with a neighboring wine bar. On one of our evening visits, a man playing Spanish guitar serenaded the diners under the warm patio lighting, and it was nothing short of magical. The staff at Pomodoro is unbelievably friendly, and so many servers are willing to take care of you that you hardly know which is actually assigned to your table. If there’s no time for a sit down meal though, there is a street level window through which we can (and do) order carry out, a nice option for a restaurant that feels like such a special treat. 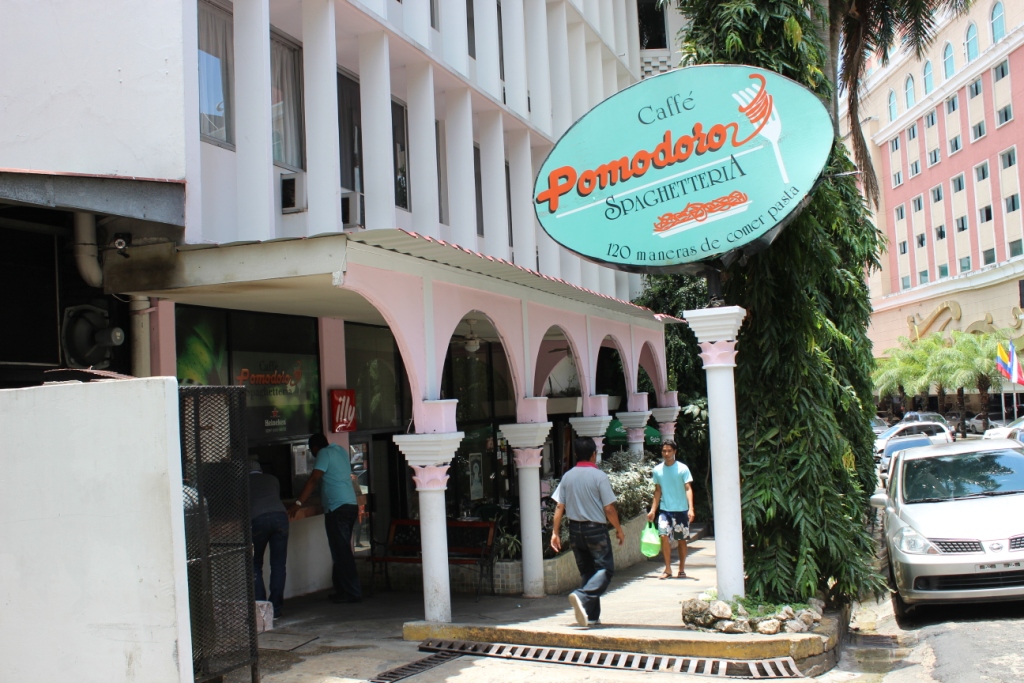 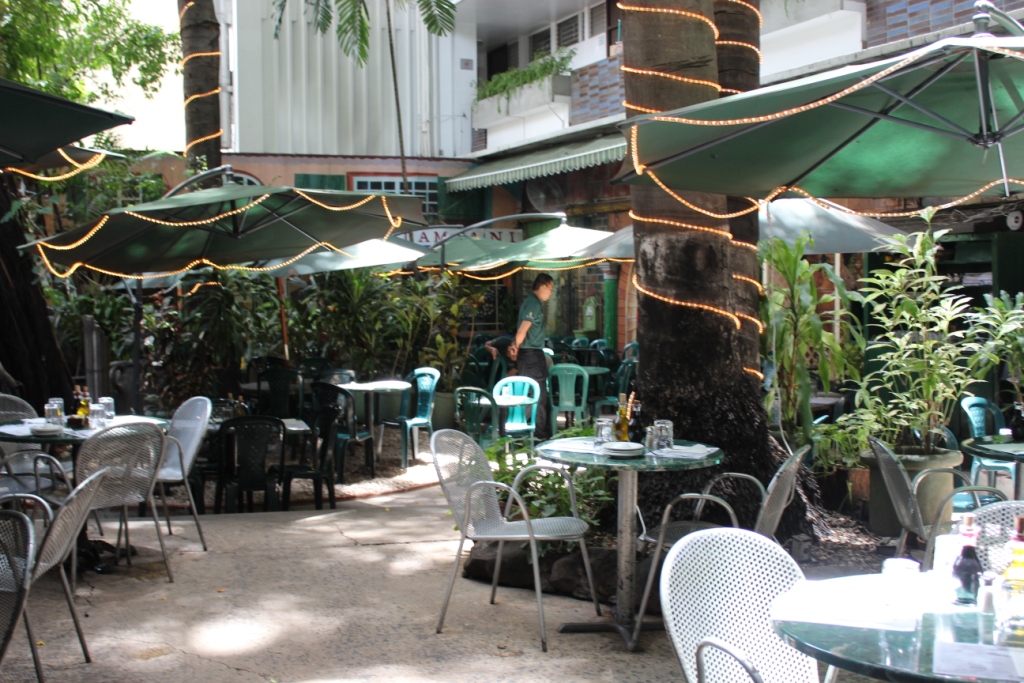