If you grew up within a couple hours of the Kansas City area and are somewhere between the ages of twenty and forty-five, there is a strong statistical probability that your first ever roller coaster experience was on the legendary Zambezi Zinger at Worlds of Fun. Named for (and themed after) an African river, the Zinger had a number of unique features that make it unforgettable: 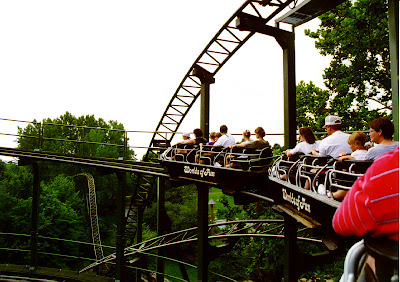 The Zambezi Zinger at Worlds of Fun

In time, we graduated to taller, faster, more exciting rides. The straightaway speed of the Timber Wolf seemed more thrilling than a ride that three year olds could go on, the double loops of the Orient Express made the brain damaging shakiness worth the pain, and eventually the Mamba eclipsed them all.

Then one day the inevitable happened. In 1997, the Zambezi Zinger was decommissioned and disassembled. Hearts everywhere cried out, yearning for simpler times and one final dance. The Zinger was relegated to that bittersweet place in our minds where first cars, first beers, and first kisses go, forever destined to be a beautiful memory of a past when life was not nearly so complicated. She gave us everything she could, then left us behind to face this cold world without her…

The Zinger lives on as La Broca in Colombia

…ONLY SHE DIDN’T! As it turns out, the Zinger was sold to the Colombian National Coffee Park, a theme park located just outside Montenegro in Quindío Department, Colombia. Her color scheme has changed – she is yellow and blue now – and a minimum height of 1.20 meters has been instituted, but the Zambezi Zinger lives on. She is now called La Broca, and is described as “la Montaña Rusa más larga de Colombia” (the longest roller coaster in Colombia).

She is far away, but I can already see the trees falling away below us as we climb that spiral and feel the Colombian African wind in my hair as we make that initial plunge toward seatbeltless freedom. To this point we have generally been reluctant to make any specific plans about places we will go, but I dare say a reunion with the Zambezi Zinger has made the list.