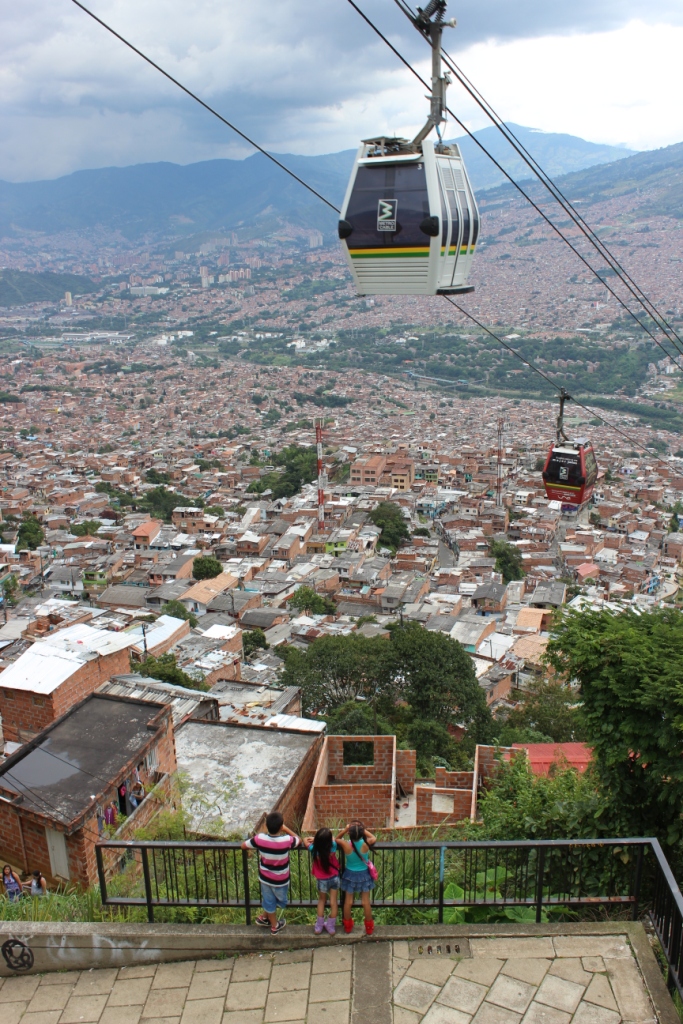 The city of Medellín sits in the Aburrá Valley of Antioquia, split down the middle by the Medellín River and surrounded by the green peaks of encircling mountains. Despite its location just 430 short miles from the equator, Medellín is graced with year round average temperatures in the low seventies, a relatively consistent state which has earned the city its fitting nickname “La Ciudad de la Eterna Primavera” or the City of Eternal Spring. This climate can be largely attributed to the location of the city at 5,000 feet above sea level in the northern tip of the great Andes. With over 2.7 million inhabitants in the city-proper and nearly 3.6 million in the metro area, the population of Medellín has increased by 750% since 1950 and is now Colombia’s second largest city. The population spike in the middle of the 20th century followed a 1948 assassination of a presidential candidate, of which the subsequent political unrest and violence in rural areas drove many into the cities. These mostly poor newcomers built their homes up the walls of the bowl surrounding the valley, the beginning of Medellín’s seemingly backwards structure with the urban areas housing the more affluent, safe regions and the outskirts containing various low-income barrios with higher rates of criminal activity that are often associated with inner-cities (not quite the burbs we’re used to). While this is still a generalization that can be made about the economic makeup of the city, an even more acute delineation of wealth exists between the north and the south, where southern neighborhoods are consistently more well-to-do.

From our 10th floor Medellín apartment where we keep the windows open 24/7 and greet each day by looking out at the beautiful view of the valley, we can’t help but recall the many years that we both assumed we would never be able to visit this country at all. Indeed for a long time it was perilously dangerous. Remember how we mentioned San Pedro Sula in Honduras being the current “murder capital of the world”? Well, their title earning rate in 2012 was 169 intentional homicides per 100,000 inhabitants. In Medellín in 1991, the rate was 435 per 100,000 inhabitants, or 2.5 times worse than the worst rate in the entire world today. I cannot even imagine it. Most of the violence, and there was a lot of it, resulted from the presence of Pablo Escobar’s infamous Medellín Cartel and its ensuing battles with competing cartels, campaigns against the local police, terrorism and war on their own government, and general lack of consideration for the lives of anyone else who got in the way. The cartel operated in the 70s and 80s, peaking in the mid to late 80s before being systematically disassembled by an international coalition of forces that killed Pablo Escobar in 1993. Despite the atrocities he ordered and legacy he left behind for the country, approximately 25,000 people attended his funeral. Escobar was considered a Robin Hood to many of the city’s poor for whom he built hospitals, schools, and churches, supported social projects to improve housing, and sponsored youth sports teams. The divisive perspectives still exist, now in regards to his legacy, and while he’s typically no longer an appropriate conversation topic, it can be expected that a person’s opinion of Escobar would be highly tied to their economic status, and in turn, their neighborhood.

For nearly a decade after his death, the violence continued as other groups stepped in to the open role. In 2003 though, things started to change for the better with Mayor Sergio Fajardo at the helm, libraries and parks being built in the poorest areas of town, and transportation systems improved for commutes up and down the hills. This was a dynamic undertaking with far more complexities, involved parties, and impressive stories than we have the capacity to cover here, but the result of the various undertakings translated to an 80% drop in homicide rates. The progress continued. In March of 2013, Medellín was awarded the title “Most Innovative City”, a designation that came with massive amounts of praise for the city’s climb from the bottom, its current state, and its forward-thinking future. The Urban Land Institute remarked that “few cities have transformed the way that Medellín has in the past 20 years,” specifically pointing to their transportation improvements as links “that reduce commutation times, spur private investment, and promote social equity as well as environmental sustainability.” They go on to say that the “change in the institutional fabric of the city may be as important as the tangible infrastructure projects. Medellín is one of the largest cities to successfully implement participatory budgeting, which allows citizens to define priorities and allocate a portion of the municipal budget. Community organizations, health centers, and youth groups have formed, empowering citizens to declare ownership of their neighborhoods.”

Proud Mayor Aníbal Gaviria spoke of the innovation as well, offering that “Medellín stands today as an example for many cities around the world, because despite having lived very dark and difficult times 20 years ago we have been undergoing a true metamorphosis. Going from pain and fear to hope, and now from hope to be a place filled with life, the city has known how to innovate in every step, both in social programs, urban developments or the combination of both and this has been key in the success of this process.” Certainly we’ve felt that sense of liveliness, innovation, and hope in our short stay in the city. It’s modern and energizing. We like it here.

Not all signs point to permanent fixes and long-term stability though. Since their drastic drop in 2003, homicide rates increased four years later, then decreased once more, and most recently have been on the rise again. Many areas of the city can be dangerous, especially at night, and drug trafficking still plays a major role in the region and its exports. Locals often worry that the old days could return, a possibility that isn’t hard to imagine when you consider the implications of the timing of certain swings in the prevalence of violence as they correlate with specific political and legal activities. For example, the arrest and conviction in the United States of notorious Colombian kingpin Don Berna coincides with increased homicide levels and decreased stability, leading some to believe that the progress that had been made in Medellín was done through an agreement with the organizations, not the eradication of them.

It’s easy to see it as just Colombia’s problem too. Colombia and its cocaine and its drug selling and its violence. That place, way over there, the bad one that sends its harmful cocaine to good countries. But in actuality, the business is a product of capitalism, and like those who follow him today, Pablo Escobar was only able to grow his empire because he had a whole lot of customers paying him to do so. Some estimates put the amount of cocaine imported to the United States during Escobar’s reign at 70 to 80 tons per month. You don’t move that kind of weight to sit on the inventory and hope some Americans will decide to buy it. You do it, and all of the other immoral side tasks along the way, to meet a demand. At its height, the Medellín Cartel was raking in $60 million per day.

Introducing Medellín is a complicated endeavor. The city is a sea of terracotta colored buildings separated by deep green vegetation. It is beautiful, and it’s climate even better. Fashion, art, music, and literature produced here plays a leading role in the region, continent, and world. Not a day passes that we don’t see cyclists riding by or college students playing pickup games of soccer and basketball. Infrastructure, architecture, and public transportation feel finished and effective. The coffee is delicious. When I started this post, I wanted to write about the city that exists today without the cloud of its past casting a shadow over my story, but I found it impossible to do so. Indeed Colombia is different now than it was 20 years ago, better, safer, revolutionized even. It has not, however, broken free of its history or become satisfied with the status quo, and there is a sense of great chance and possibility in knowing that the future of Medellín has the potential to be so innovatingly notable by continuing to develop in the direction of prodigious progress or quite equally so by reverting back to a hopeless set of tragic circumstances. 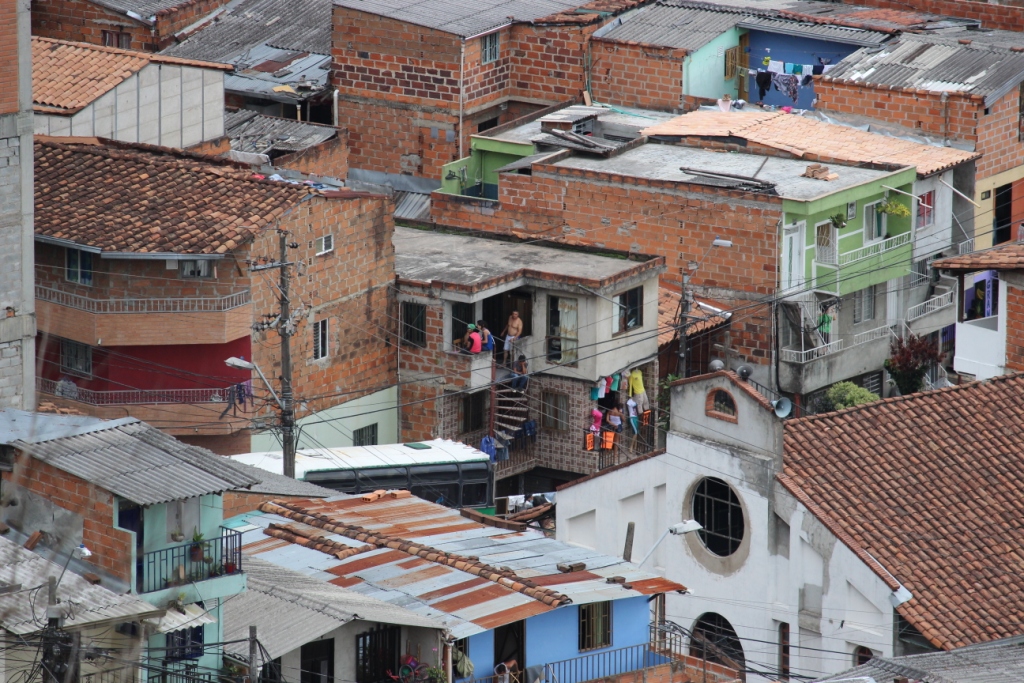 The Santo Domingo Savio neighborhood, home of Biblioteca España and the K line of the metro cable 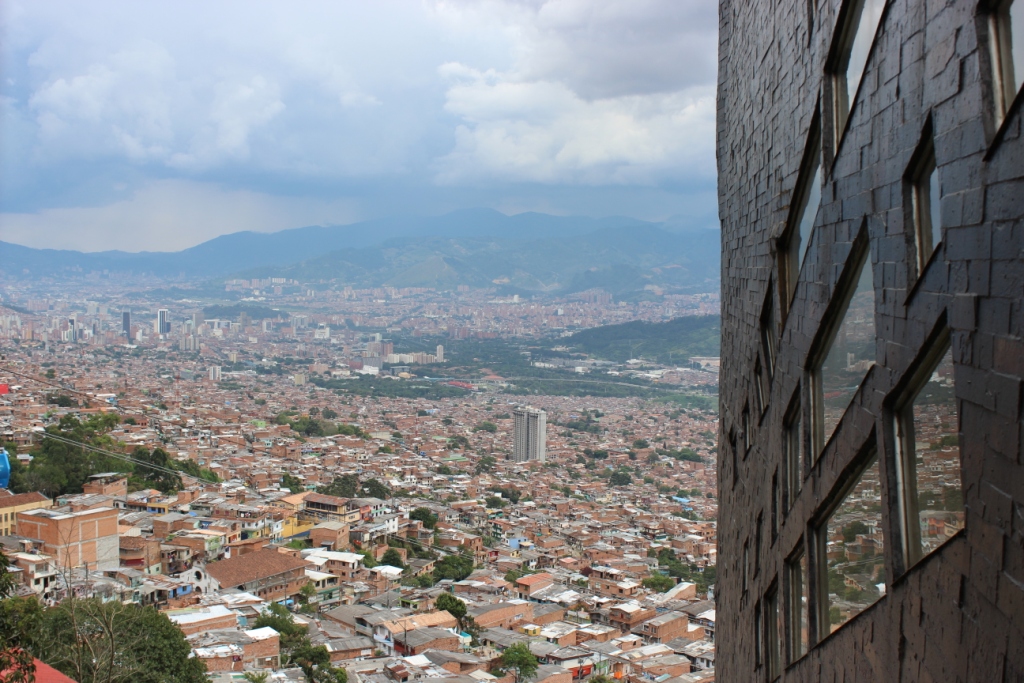 View of Medellín from Biblioteca España 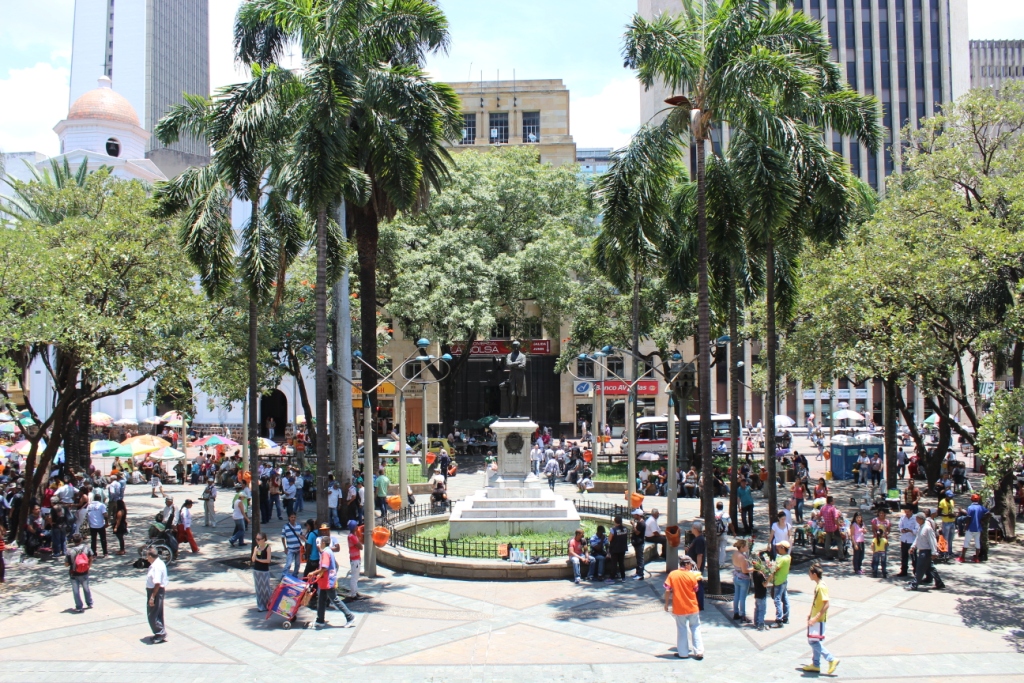 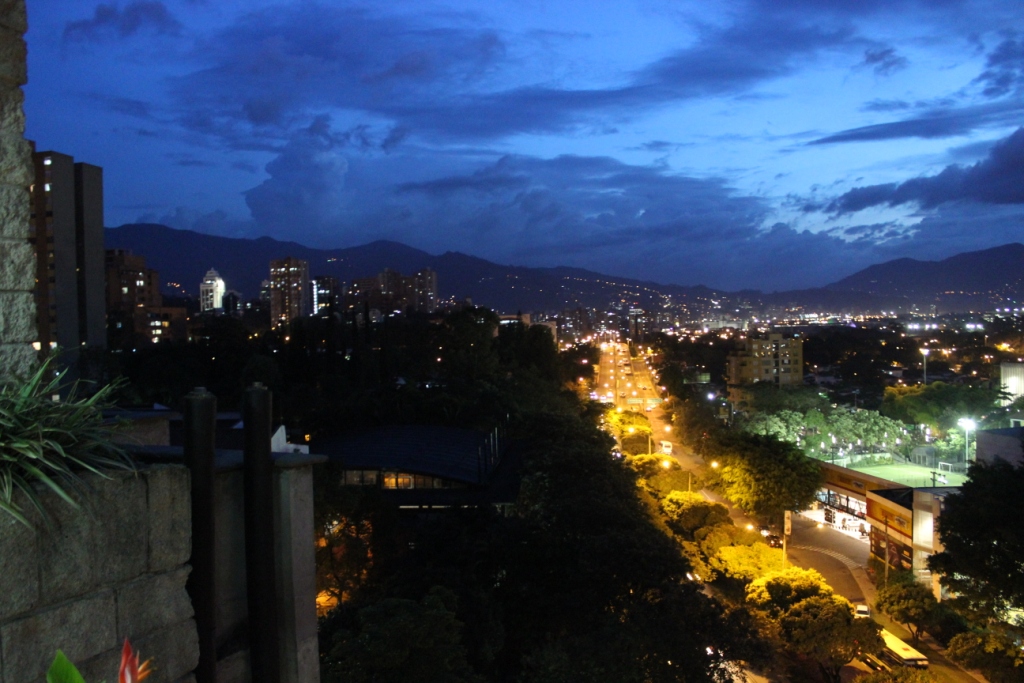 The Christian Science Monitor – Medellin, Once Epicenter of Colombia’s Drug War, Fights to Keep the Peace

CNN – Inside San Pedro Sula, the ‘Murder Capital’ of the World

The Guardian – Medellín, Colombia: Reinventing the World’s Most Dangerous City

Meeting of the Minds – 2013 Innovative City of the Year

NPR – Once Home to a Dreaded Druglord, Medellín Remakes Itself