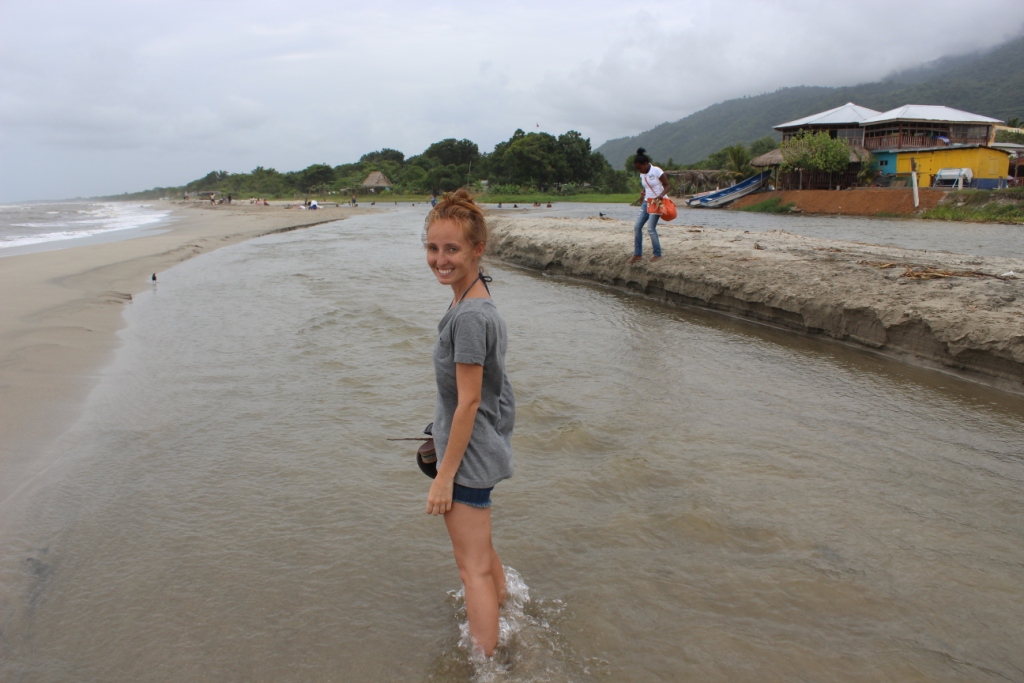 Joel told us about Sambo Creek’s upcoming feria while we were chatting after our Pico Bonito hike. We’d heard about La Ceiba’s carnival, an annual event held in May that brings hundreds of thousands of visitors each year, often tripling the population of the city during the festivities, but with our June arrival just days after the closing, we missed one of Central America’s largest festivals. I was still quite interested in checking out the smaller Sambo Creek fair that takes place annually in June, and so Saturday we drove east 10 miles, parked a bit past the village, and walked up the beach into town. In Ian’s post about our drive into Honduras from Guatemala, he gave a good brief introduction to the Garifuna peoples who make up the majority of the 8,000 inhabitant population of Sambo Creek. He wrote:

Today’s Garifuna number around 600,000. Garifuna culture is quite distinct; their language is a mix of Arawak, Carib, English, French, and Spanish, their cuisine and music both have unique flavors, and their history is fascinating, if uncertain. One theory on their origin is that after a slave ship filled with Ibibio (from present-day Nigeria) people wrecked near St. Vincent in the seventeenth century, the survivors were either assimilated into the local Carib population or forcibly carved out their own territory on the island. Another theory posits they were escaped slaves from various other islands. Either way, when the British took control of the island in 1796, they decided that the more “African-looking” Caribs were enemies who needed to be removed, while the more “indigenous-looking” Caribs were allowed to stay. Thus, 5,000 “African-looking” Caribs were forcibly deported to the island of Roatan, off the coast of present-day Honduras. The 2,500 that survived the journey found an island too small to sustain them, so they asked the Spanish administrators to be allowed to settle on the mainland. After approval, the Garifuna spread along the Caribbean coast, where they can still be found to this day in Belize, Guatemala, Honduras, and Nicaragua. 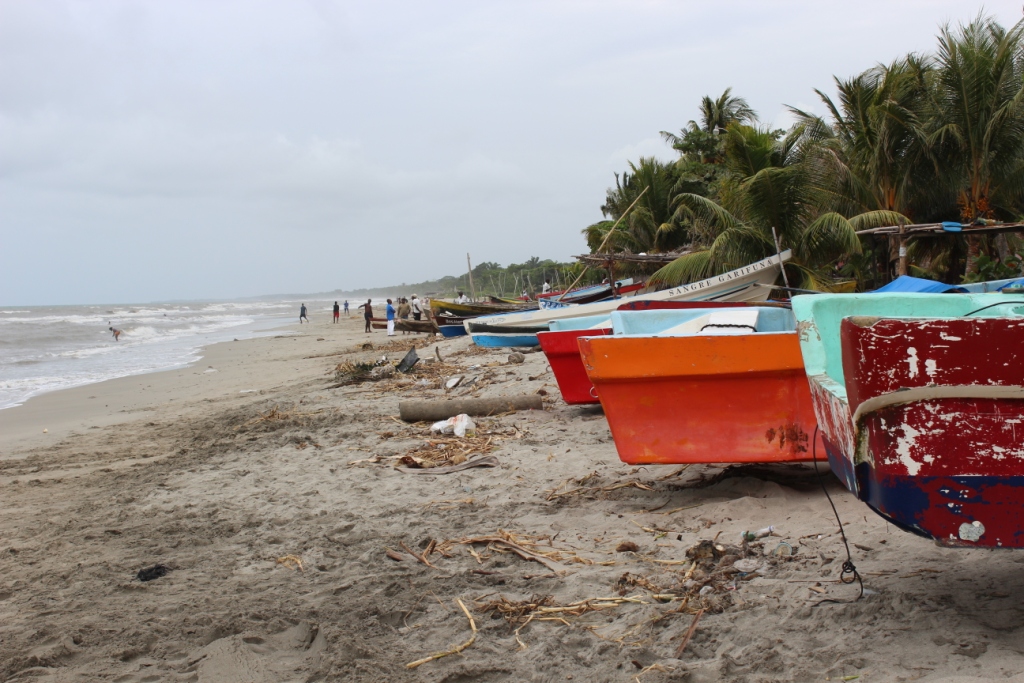 Though the liveliest parts of the festivities take place in the evenings and into the nights, the streets of town were abuzz with excitement and full of smiling Hondurans. Even the namesake Sambo Creek from which cool mountain water flows through the beach to merge with the warm Caribbean was full of families swimming, playing, and laughing. We left the coastline near the middle of town and took the main road from the highway inland until we stumbled upon a busy soccer field and found a spot along the sideline just before kickoff. It was quickly clear that we were possibly the only non-Hondurans present and perhaps two of just a couple dozen non-Garifunas, but no one seemed all that interested in or bothered by our presence (though as many minorities will attest, you do certainly notice people noticing you when you look different than everyone else). The majority of the crowd was on the same sideline we were, but onlookers were dotted around the entire field and posted up along the wall behind the west goal line. A couple of teams between games socialized and prepped uniforms. Some fans even stood chatting on the field, seeming not much interested in the sideline even after the game had started. But the players were serious and though they played a decent game with commendable sportsmanship, their teamwork, use and respect of space, and unselfish play were not major themes. Later in the half, a Spanish-speaker next to us explained that we were watching part of a tournament that occurs during the fair each year for teams with players “around age 20″. This year, he said, 7 teams were competing, many having traveled respectable distances with one team even driving 7-hours each way by bus. 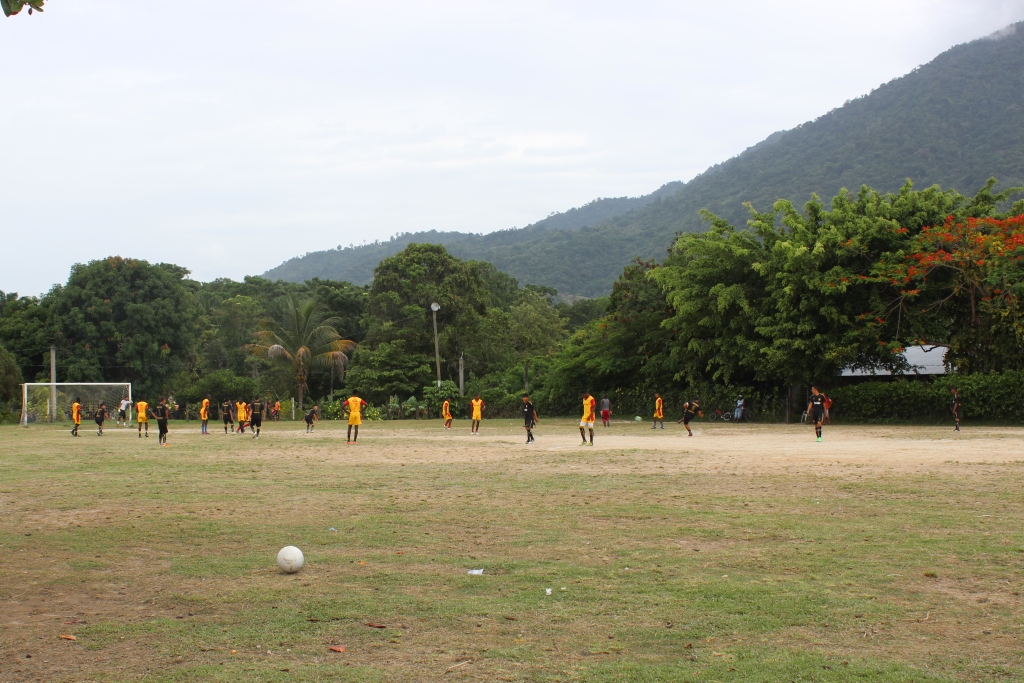 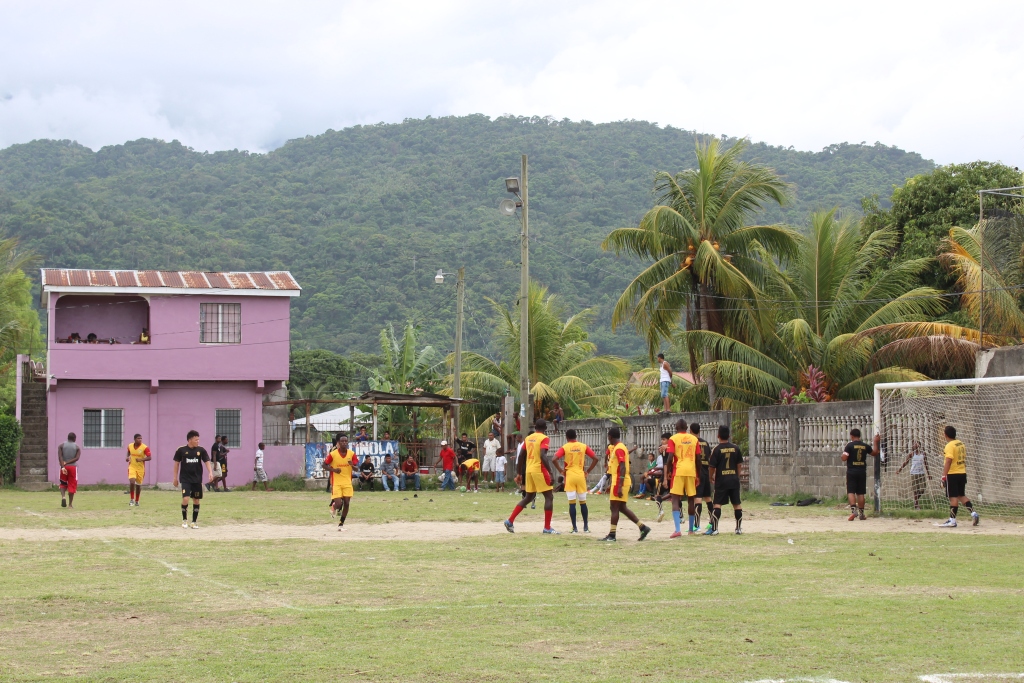 We were impressed by the commitment and stood commenting on the community involvement, when two fighter jets suddenly treated us to a “flyover”. This was, of course, awesome, and I felt like one of the glowing dinoflagelettes we discovered while camping on the Sea of Cortez in Baja Sur, like the jets were fingers sweeping through the water and I and everyone around me was illuminated by the force. There was a lovely surprised cheer, some excited chatter, and then back to soccer before our hearts had even stopped pounding. Then something we found even more shocking occurred. A young boy wearing only shorts came sprinting across the field (in the middle of the game; no one cared), running with all his might from the similarly sized child behind him who was painted in head-to-toe black, donning a mask, sporting a fringe skirt, and chasing him. With a spear. A fucking spear. Holy shit! I have never seen anything like that before, no tribe-esque cultural ritual, and especially not as it exists outside of the mainstream or for the enjoyment of tourists. It was so genuine and neat, and then all of the sudden, it was so asking us to play along. Four Garifuna boys planted themselves directly in front of us, one painted and dancing, one with a container for cash tucked inside of his shirt, one with a whistle, and one with a small tub of tar-like oil. The masked, dancing figure was initially the most captivating, but his giggling, bossy friends were the ones making demands. They requested cash, and I delivered my change quickly, getting a laugh or two for being a silly, fumbling gringa. No sooner had they come were they gone, and shortly thereafter walked by the first boy who had been chased, now covered with streaks of oil across his torso and face while his tormentor sped after a new victim, this time a girl in a soccer uniform who naturally left him in her dust. We had unknowingly, but fortunately paid to not be painted. While asking a woman in a nearby pulpería later about the custom, “el Indio Bárbaro” (the Barbaric Indian) was described to us as a tradition of the fair (though blogs like this one seem to indicate that the custom is a broader Garifuna ritual occurring during many holidays). When I mentioned all of the running children, she laughed heartily as she explained, “If don’t have any money, you run!” 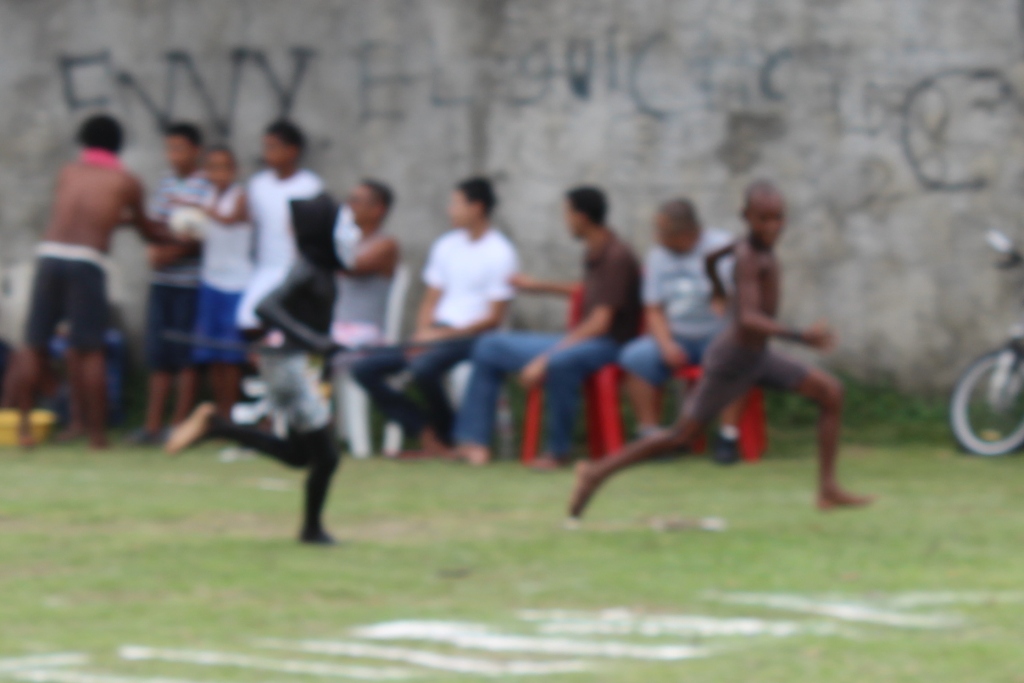 A boy being chased by el Indio Bárbaro. Sorry it's blurry! 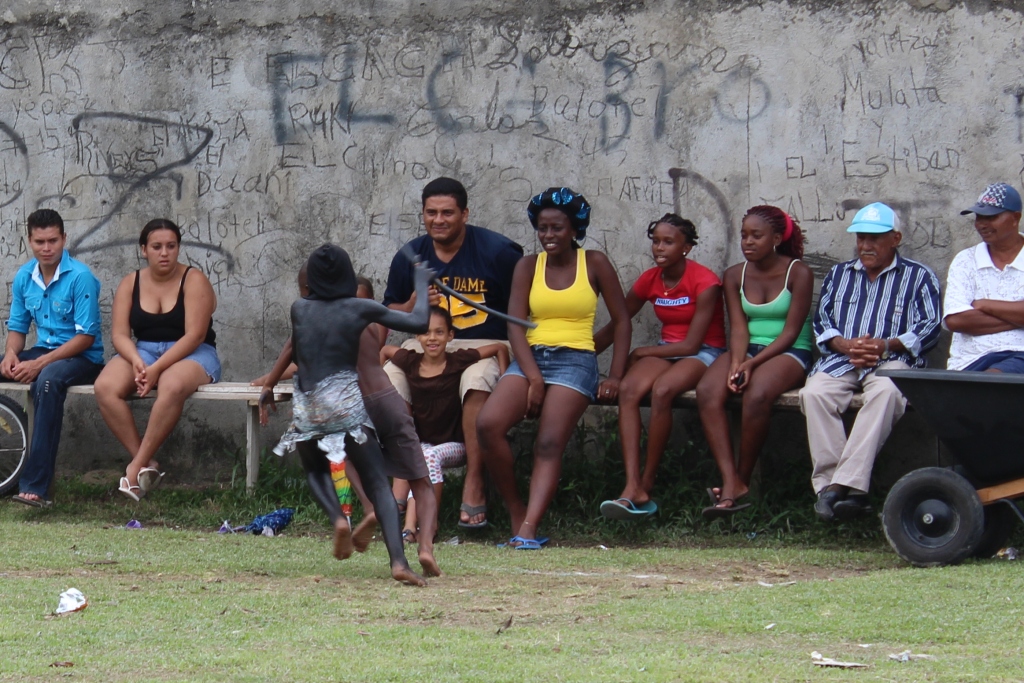 Onlookers are entertained as el Indio Bárbaro closes in on the boy who didn't pay.

We meandered through town watching the pieces come together for the evening’s celebrations. A couple of young men sat restfully on one of the permanent town pavilions, enjoying beverages and loud music coming from large speakers that they appeared to either be watching over or testing. They smiled kindly and waved as we strolled by on the narrow, sandy street. A few blocks down an even bigger stage was being assembled, this one with a crew at work hanging Tigo banners and readying audio equipment. Groups of women passed by chatting, each in their own matching dresses like a family label or uniform. Chanting, rhythmic clapping, and happy dancing spilled into open space from a nearby building. We hung out for a while, taking in the sounds and smells and sights. It was a real and raw experience, thrilling but also incredibly laid back, cool, calm, and collected. 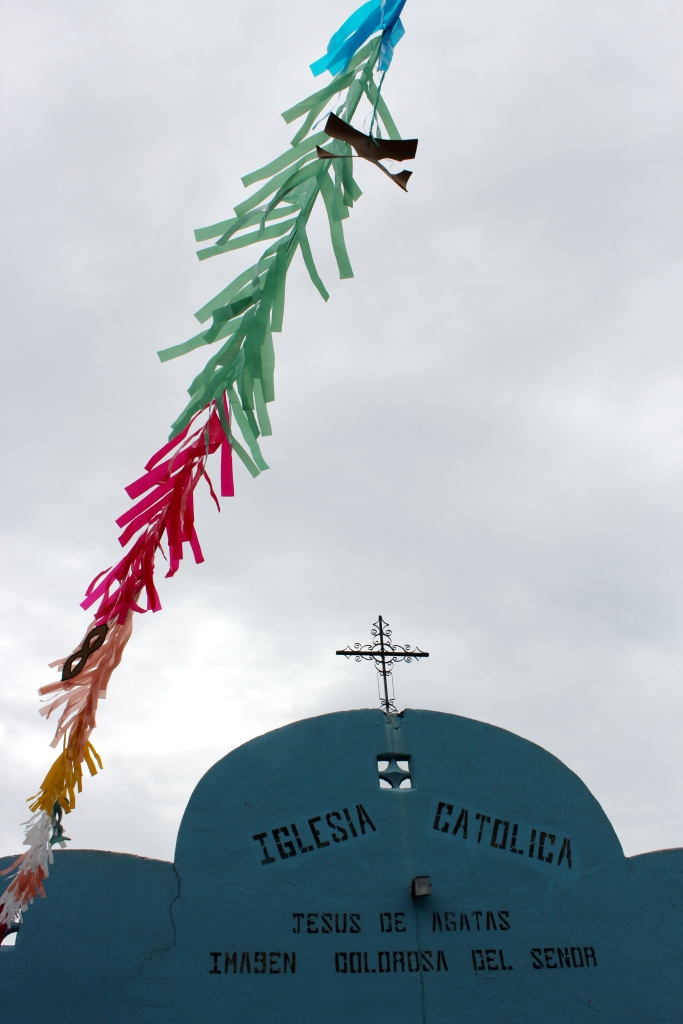 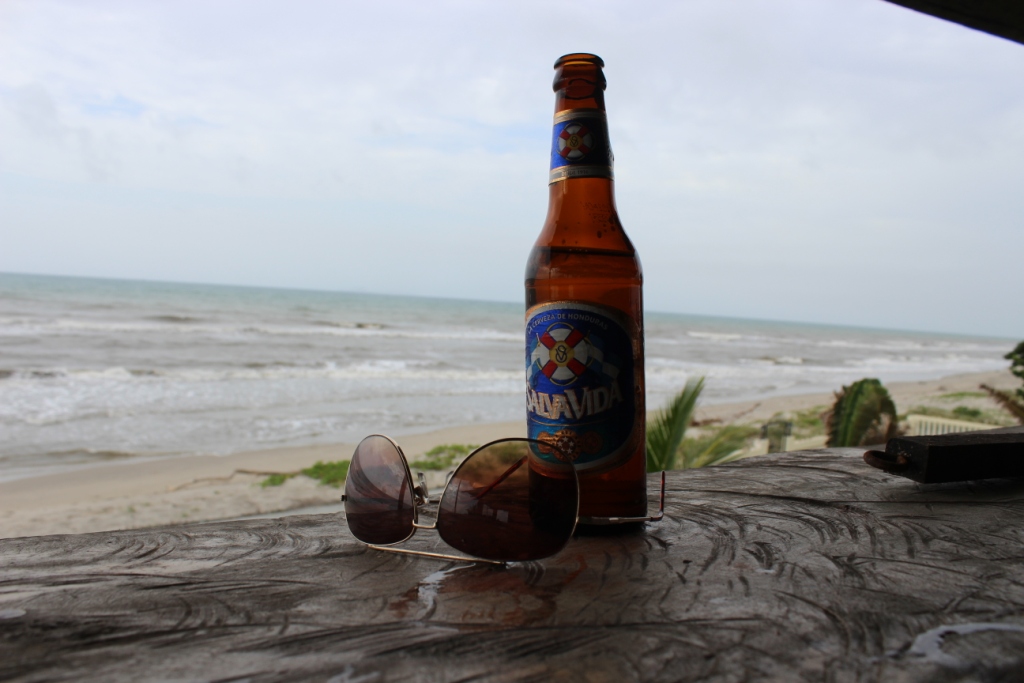 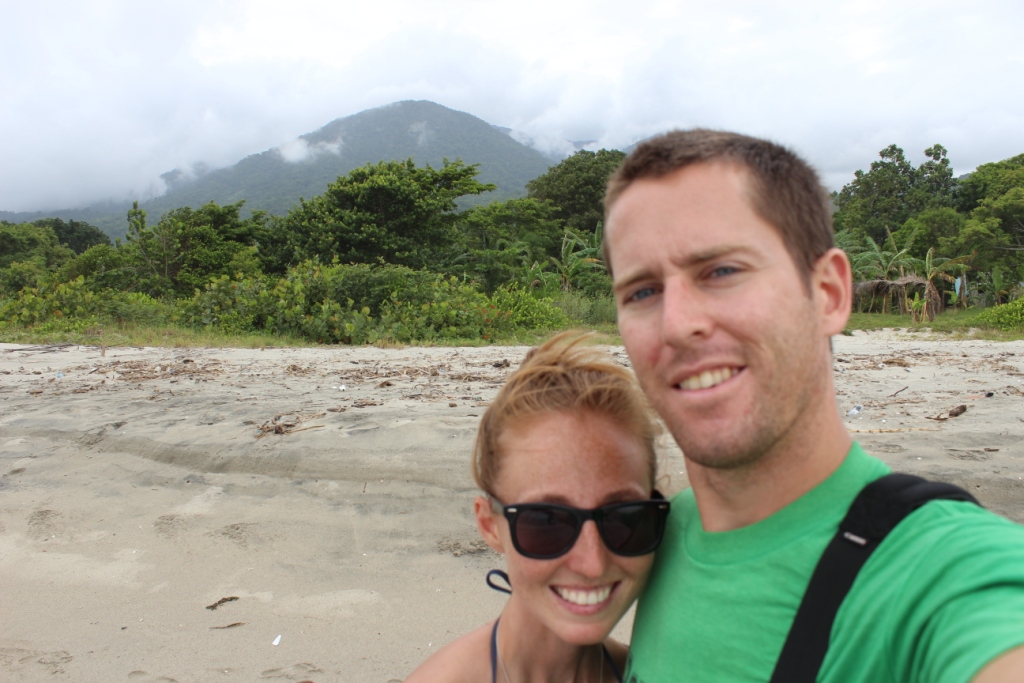