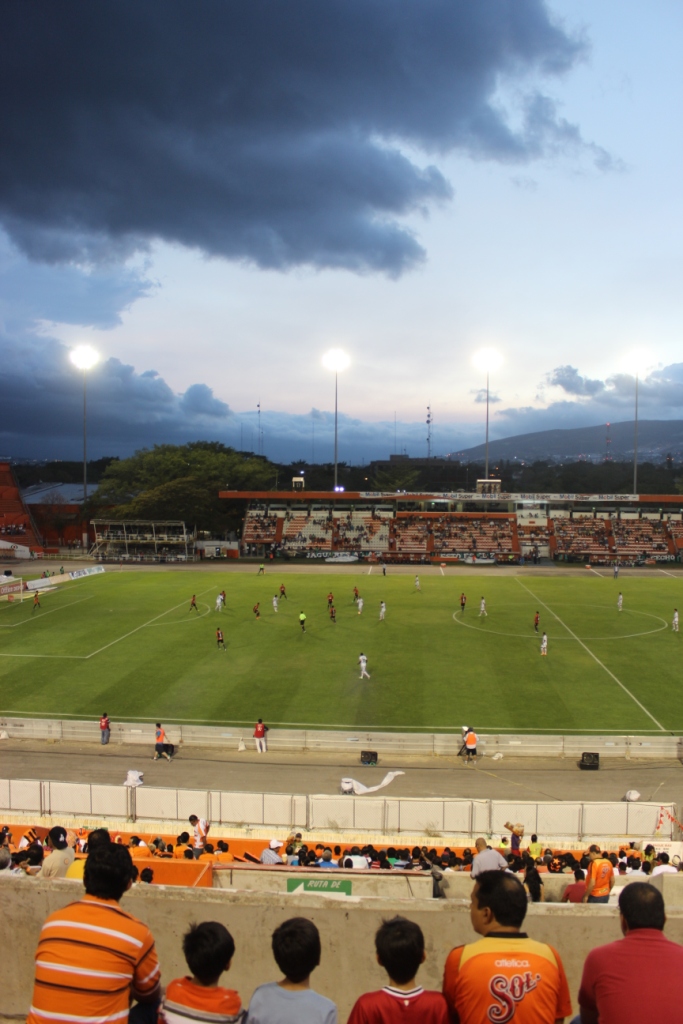 The Cost: Tickets, which can be purchased at the sales window at the stadium, range from 50 pesos each ($4 USD) for seats behind the goal line to 1,000 pesos each ($80 USD) for suites. We paid 200 pesos ($16 USD) total for two “preferential” tickets, which are general admission seats along the side of the field. The center-most stands at midfield were blocked for “numbered preferential” ticket holders, but we found good seats just a few rows behind them. Parking cost 20 pesos ($1.60 USD) per car, payable to the attendees at the lot entrance.

The Facilities: The Jaguares’ home field is at Víctor Manuel Reyna Stadium in Tuxtla Gutierrez, the capital city of the state of Chiapas, about 55 miles west of San Cristobal de las Casas. The stadium has a capacity of 31,500 and according to wikipedia, was named after a physical education teacher who started leagues in the state. Conveniently located just off of Libramiento Norte, a bypass of sorts around the north side of town, the stadium is surrounded by a large parking lot. Though we didn’t do any perusing of other nearby parking, the amount of walking traffic coming into the lot lead us to believe that many fans either take public transportation to the stadium or park on nearby streets. Ticket holders must enter the stadium through the entrance most near their seats, so once inside, the facilities are relatively easy to navigate. The majority of the seats were bleacher-esque concrete steps, and the bathrooms were equally basic. Toilet paper was maybe available via an attendant sometimes if she happened to be standing there, but otherwise, there was no machine, so it is probably best to bring your own – advice that we would extend to any outing in Mexico.

The Concessions: Concessions were purchasable via roaming vendors carrying 5 gallon buckets of iced beverages, cardboard boxes of chips, and attractive displays of various nuts and sauces. Single beers were available for 25 pesos ($2 USD), liters for 50 pesos ($4 USD), and liters of micheladas for 70 pesos ($5.60 USD). Signs posted along the retaining walls clarified the beverage prices and urged fans not to pay more, presumably a tool to curb up-charging by vendors.

The Super Fans: When we asked about the sideline section at the ticket window, we were told that they were better than the ends because those sections were dangerous. We made our decision based on view of the field, but once inside, we agreed that “dangerous” is not how we would describe any section of the stadium, which surprisingly to us, was only approximately a third full. A few visiting fans dotted the stands, some even sitting next to us with friends who were cheering for the home team, but no one seemed to mind. The hooligans, who were indeed led into the stadium surrounded by a decent sized troop of state police and who perhaps have been part of disorder in the past, were actually in lovely form during our visit, seeming in high spirits - singing and chanting and drumming cheerily - despite a stoppage time equalizer by the visiting team. There were, in fact, no fewer than five separate bands in the crowd, each surrounded by a crew of orange (with wigs and body paint and instruments and full body jaguar costumes) belting out cheers and songs heartily and without rest. 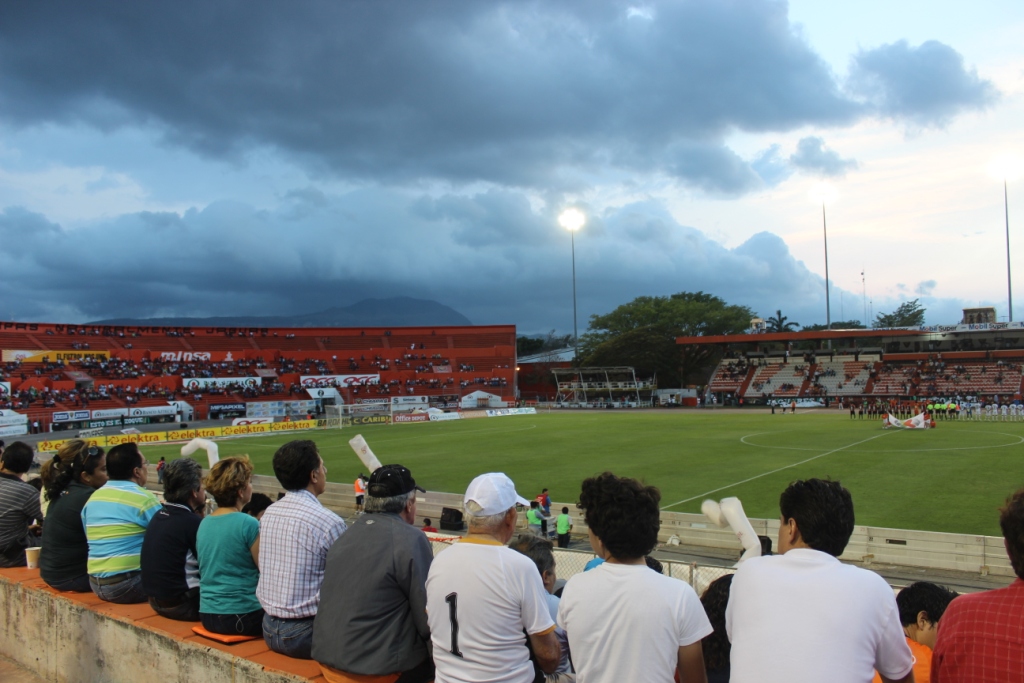 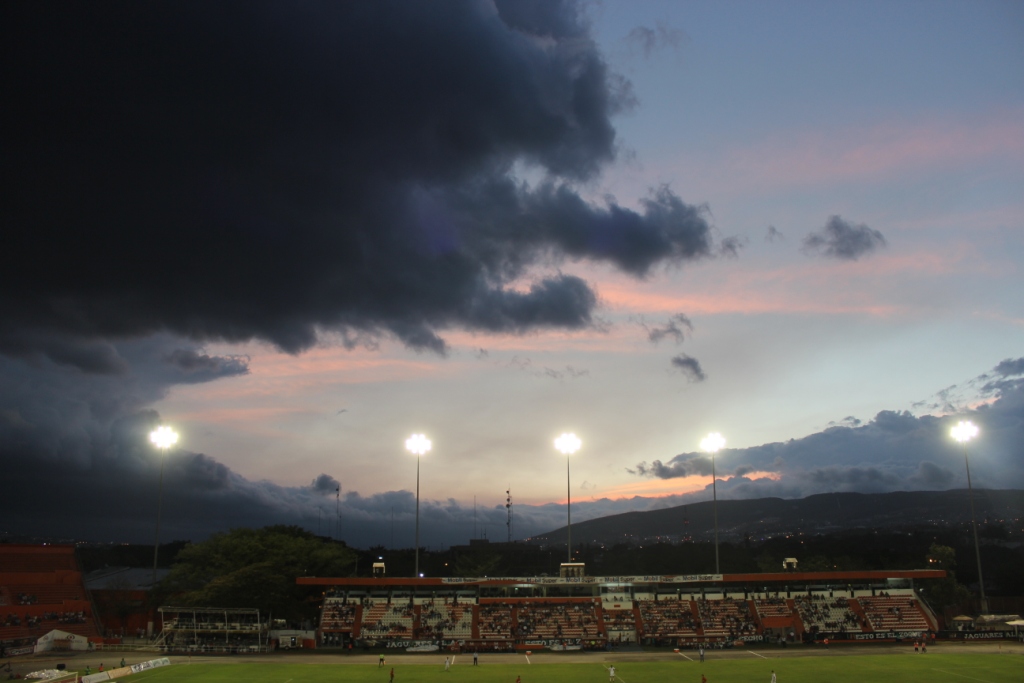 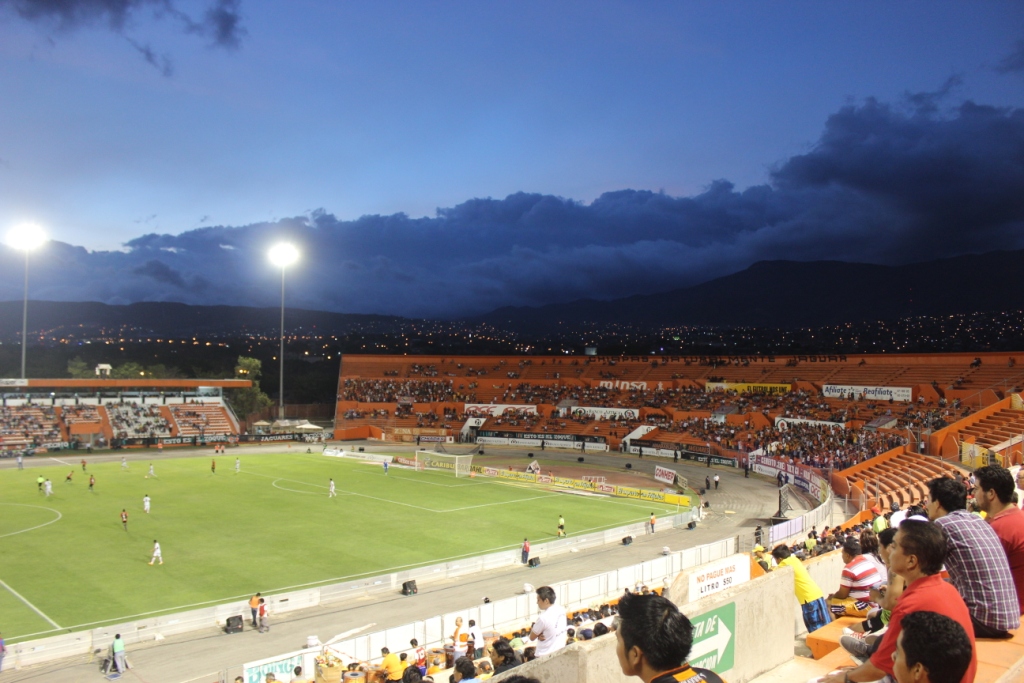