How to Get Your Brazilian Visa in Buenos Aires

US passport holders require a visa to enter Brazil. They should be valid for 10 years, 90 days at a time, up to 180 days per year. You can get one pretty easily in Buenos Aires. Here is how to theoretically go about doing this (details about our experience are below):

Our only real mistake during this process was not booking an appointment far enough in advance. I set up our appointment on a Monday, and the earliest we could get in was the following Thursday (as in ten days later). We just so happened to be leaving the Saturday after that, so we had no buffer time and had to hope a one day turnaround was going to work. Other people have written about their experience, and most — but not all — of them had been able to get their visa in 24 hours. Fingers crossed I guess.

We got our documents together on a USB drive and checked them about sixteen times, then took a couple terrible mugshots. Passports and USB drive in-hand we rode the Subte across town, found a printer, got everything printed, and rolled into the consulate at 11:00, fifteen minutes early for our appointment. The security guy at the door pointed us to window #5, apparently the line for tourists, where we were third in line. By the time we were moving up to next in line shit got crazy…

A young lithe Brazilian man at window #3 started to raise his voice at the person behind his window. This, of course, was in Portuguese, so we didn’t really know much of what he was saying. There appeared to be some issues with his paperwork. He started to pound on the window a bit and stared at the gentleman behind it while his voice grew louder and his eyes more intense. By this point I imagine every single eye in the room was on him, which probably fueled his feeling of isolation and rage. A few moments later he walked to his bag sitting on a ledge ten feet back from the window, unzipped it, and started to pull something out. Ummmmmm. Please don’t do that. He changed his mind and went back towards the window, but silent alarm signals had gone off inside everyone around. The consulate workers cleared everyone else out of the room and into the hall and the middle-aged security guard advanced slowly.

We piled out into the elevator area just outside the consulate office. An important point: the entire outside wall of the office is floor to ceiling glass. We were all technically out of the room, but then we all just stood there like some quiet audience and watched everything unfold. To add to the mess, the elevators just kept bringing more people up to join the crowd and wonder what on earth was happening.

Then the young man went for his bag again. He managed to get what looked at that point like some kind of rod about halfway out of his bag before the security guard’s hand latched onto his wrist and held it in place. He stood hard and stern, but spoke quietly trying to calm the younger man down. After three or four minutes of deadlock (and yelling all the while), he gave up on whatever he wanted from his bag. A second security guard from somewhere in the building had appeared by this time. The first took the man’s bag and disappeared with it to a back room. The man paced and yelled and pointed at his documents and paced and yelled and grabbed a stack of papers and thumbed through them and paced and yelled. Two policemen showed up. Then another. Then one more. He paced and yelled some more. The security guard brought out the object the man had been trying to retrieve from his bag and showed it to the police. It looked like a curved bar or pipe of some kind and  must have been rubber or hard plastic because there was a metal detector at the entrance. Eventually, the man sat down and began to calm. He looked like someone who was starting to realize they had made a mistake. The police took him in a back room for ten minutes or so. When they emerged they walked slowly with him out the door, made their way through the crowd, got in an elevator, and left. So bizarre…

Side Note #1: When something like this happens, it doesn’t give you license to bum rush the now open room and seize the first spot in line for yourself. There are like thirty of us here; you have a pretty good idea what order you arrived in and who was here before you. Don’t be selfish. When the room was cleared, there was one guy at the window ahead of us, then us, then a couple right behind us. When the room opened up, the husband from the couple that had been behind us in line when this whole thing started dashed through the crown and ran to the window. What the hell man?

Side Note #2: When you exit an elevator to a hallway full of people staring through a glass wall at a confrontation, there are quite a few ways to behave that are appropriate. Trying to get the attention of the security guard currently trying to talk down a pacing yelling person so you can tell him you “have an appointment” is not one of those appropriates modes of behavior. Then proceeding to stake out a place directly in front of the door so you can run in and be first in line is also not an appropriate thing to do. I’m looking at you little miss American thing. We all have appointments, and you aren’t more important than anyone else here.

Finally, everything was calm and we were at the window. The lady who helped us spoke flawless English in addition to her flawless Spanish and flawless Portuguese. She took our application confirmation, photos, and bank statement, filled out a few things on her computer, then gave us the payment slip for the bank and said we could come back at 1:00 the next day to pick up our visas. Suh-weet. We didn’t even have to come back to show proof of payment, they were able to verify it online. They do keep your passport at the consulate, though, so be prepared to be without it. 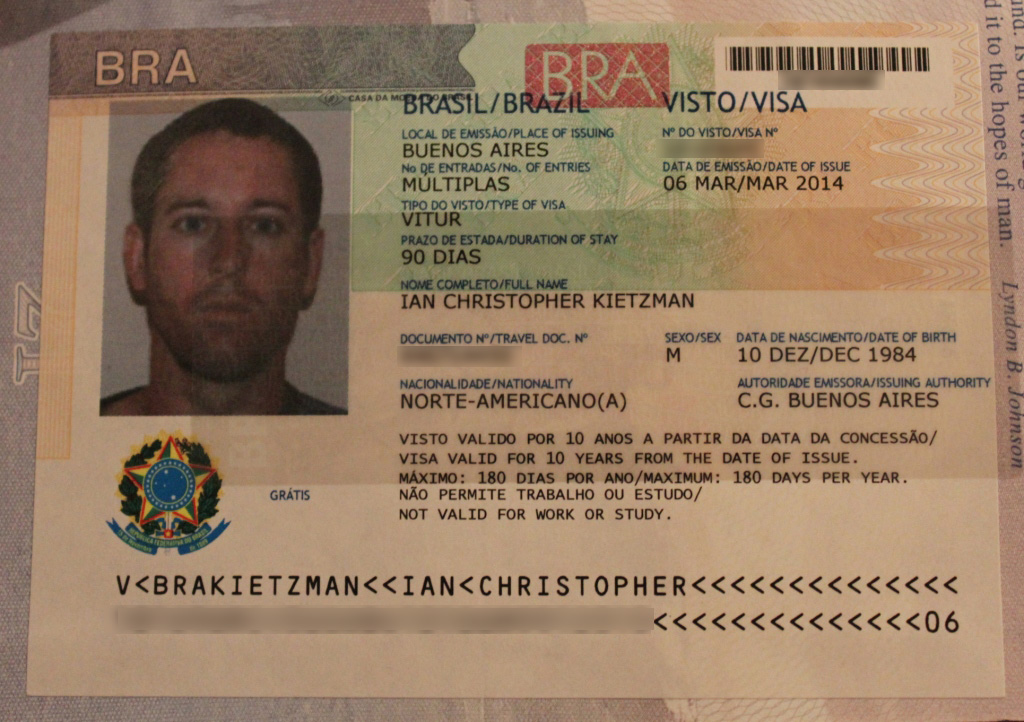