Last Sunday (and also the Sunday before that) we made a 7-hour round-trip drive from our cozy abode near San Marcos La Laguna to the Aurora International Airport in Guatemala City. In general, we hadn’t planned on spending a ton of time in major or capital cities during our drive through Central America, and Guatemala City, Central America’s largest metropolitan area by more than a million people, was no exception. With our first guests visiting us here though, we suddenly had an indisputable reason to drive straight into the heart of the big city, and after doing so, we figured we’d share our first impressions. They are, in order:

Granted, that doesn’t sound like a sales pitch for a fabulous vacation destination, but our preconceived notions of the city itself were negative and gritty from the get-go so I guess what I’m trying to say is that it doesn’t deserve the “avoid” label that we expected it to. On the grounds of inexperience, I won’t argue that the bad reviews we’ve heard have no basis. There were places we saw during the day that we all agreed we wouldn’t want to be at night, and in our two short trips to town, we only really saw one or two main roads in one quadrant of town. What I will say, is that what we saw on those two streets, both from the car and when we got out to run errands, didn’t look all that different from any other major city we’ve visited – billboards, restaurants, banks, Walmarts, grand hotels, a large zoo, etc, and in fact, some areas were really quite posh, including lots of fancy stores, movie theaters, and more than one two-story fast food restaurant. Speaking of fast food, we ate it for the first time since 2012. Damn you, Guatemala City.

2. The airport is quite nice.

We didn’t actually observe the inside ourselves, but our friends said it was pretty spiffy, and we observed them saying that. Our experience was some pretty easy to understand picture signs that directed us to “planes flying towards the ground” where we parked for 10 quetzales for half an hour and waited at a barricade outside of the only doors where crowds of people stood with homemade signs eager to greet their friends and family too. Vendors selling gum and souvenirs lingered in the area, but were in greater numbers on the departures level and didn’t approach us nearly as often as they did our suitcase carrying friends.

Closing remarks: Not the coolest thing we’ve seen in Guatemala by a long shot, but certainly nothing to avoid. 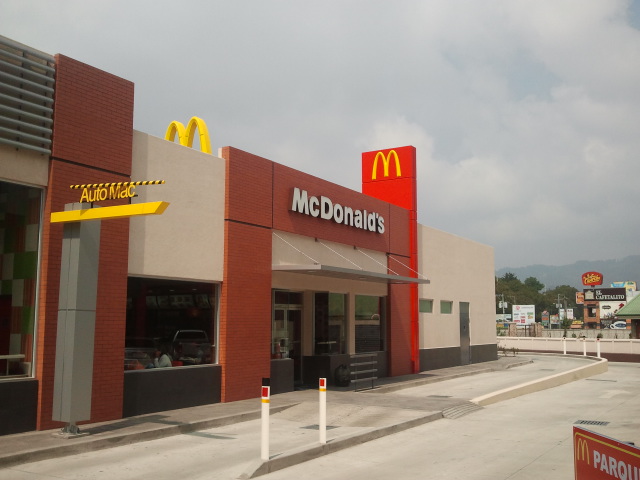 Even the McDonald's was fancy in this part of town.