Food and Dining in Buenos Aires

Disclaimer: Buenos Aires is a huge and cosmopolitan city. As such, what is written below is not in any way trying to pass itself off as a definitive guide to BA dining, only to give you an idea of the themes we saw emerge as we spent our six weeks there. 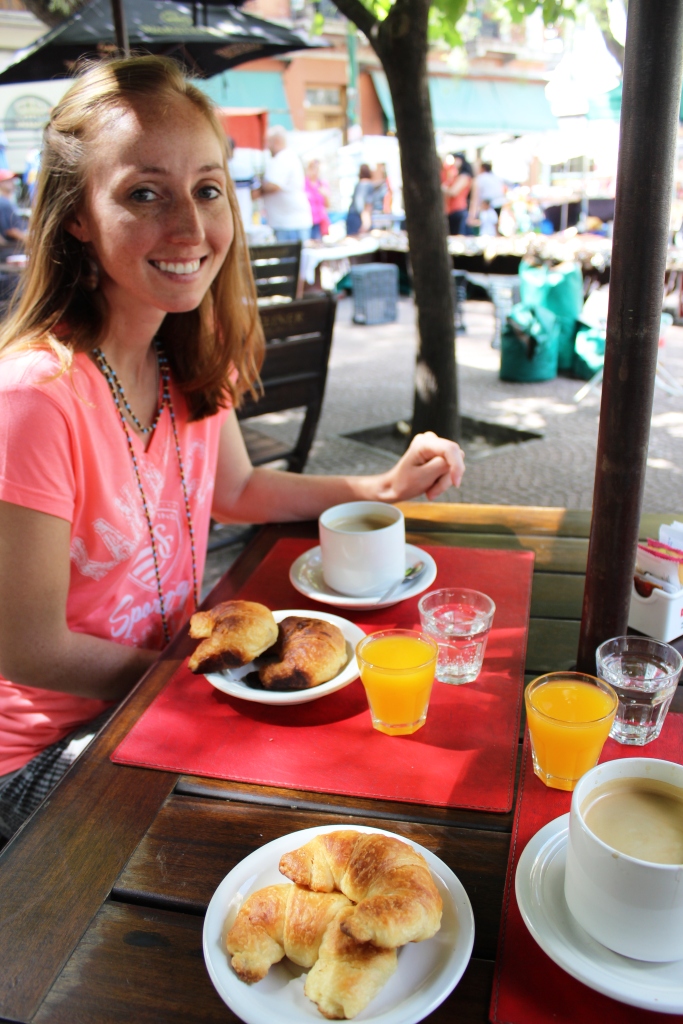 Coffee and medialunas in Plaza Dorrego

Café culture is omnipresent in Buenos Aires. You would be hard pressed to find a spot anywhere in the non-industrial sectors of the city that isn’t within a block or two of somewhere with a relaxed atmosphere and outdoor seating. Personally, the never-ending array of new places to sit, relax, have a drink or a snack, and enjoy the vibrant city living around us was my favorite aspect of day-to-day living in Buenos Aires.

That café you just sat down in has a coffee machine. Not some rink-dinky drip setup either. A real coffee machine, that will make you a mean, strong, aromatic, knock-your-socks-off, espresso-style coffee. Seriously, every single one of them. Some are better than others, but nearly all of them are better than anything you’ll get at one of the many Starbucks that also inhabit the city. And there’s really only one thing you should even consider getting to go with your coffee: medialunas. Literally meaning “half-moon,” a medialuna is basically a croissant, often sweet and buttery. For some reason or another, quality seems to vary widely, and isn’t necessarily correlated with the quality of the establishment serving them, so shop around a little. Some good news is that most cafes will have a coffee plus two or three medialuna special on their menu. Some even better news? That coffee + medialuna combo is also usually the cheapest thing on the menu.

Look, I know pretty much nothing about wine, besides the fact that I enjoy drinking it. If you are looking for a grading on things like bouquet, mouthfeel, acidity, blah blah blah, you are going to have to look elsewhere. Really, I would love to be good at it, I’m just not. According to winefolly.com:

“The main fruit flavors in a glass of Argentine Malbec are blackberry, plum and black cherry. The nuanced flavors offer milk chocolate, cocoa powder, violet flowers, leather and, depending on the amount of oak aging, a sweet tobacco finish.”

What I do know is that Argentina grows some bomb-ass Malbec grapes in its wine region, and that Malbec is arguably the most commonly consumed (and exported) Argentine varietal. And it tastes yummy. So drink some if you are in town.

(Side note: Wine is ridiculously cheap in Argentina. If you are able to get the blue market rate for dollars, a decentish bottle of malbec might end up costing you the equivalent of $2. And not Two Buck Chuck. Actual wine. This is both a blessing and a curse.) 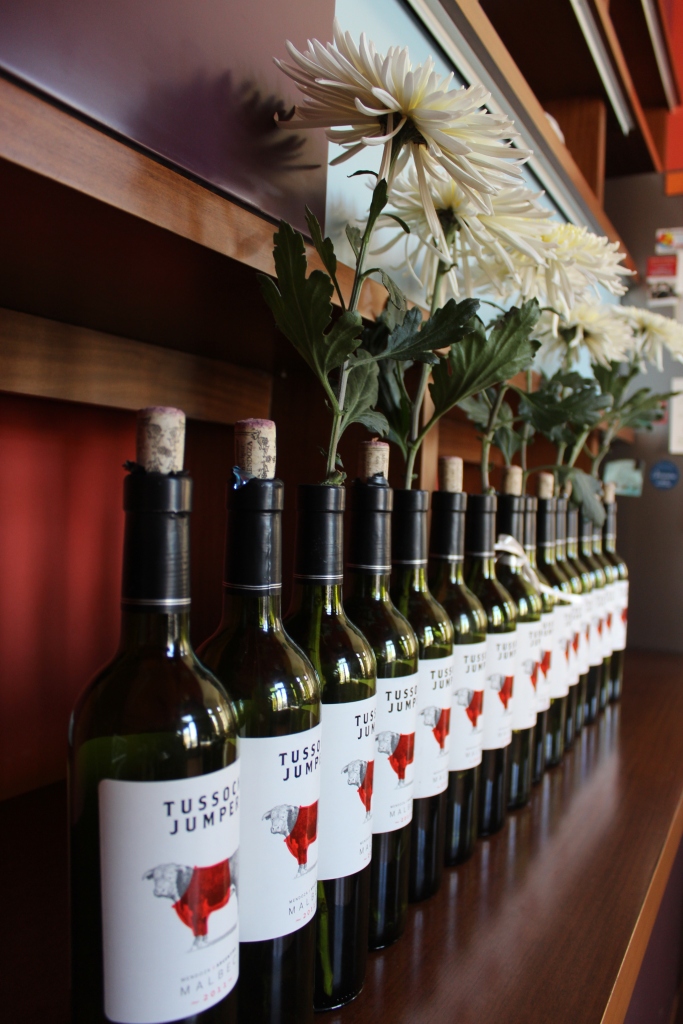 Argentina loves beef and barbeque (or asado, as they might call it). They do it a bit differently than US-style barbeque, but it’s still good as hell. Parrilla means grill. Parrillada is a meal of a bunch of different grilled meats, and is basically a required experience if you are in BA. Vegetarian? Too bad, you’ll probably have to do it anyway. There is a good chance you will see a whole lot of beef cuts, some chorizo, blood sausage, and a bunch of things you probably won’t even recognize, some more meat-y some more innards-y. Just pick a thing, eat it, and move on to the next thing.

Not sure what to say here. There are lots of ice cream parlors in Buenos Aires. Some are regular ice cream, some are gelato style. Some are cheap chains, some are fine ice cream establishments. The questions you need to ask yourself are these:

I’d personally recommend dulce de leche (try chocoloate with dulce de leche in it for you chocophiles) or frutas del bosque (if you are fruit person), but you can find pretty much anything you are looking for. 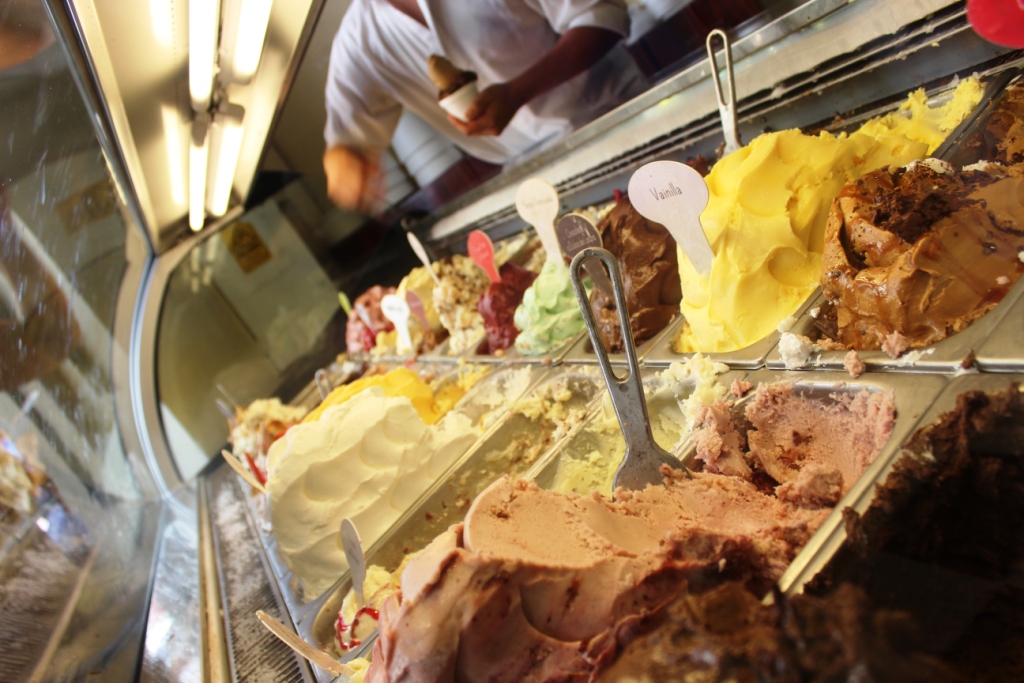 Café Tortoni on Avenida de Mayo is pretty old and super cool. Is it an expensive tourist trap? Yeah, probably. But it’s also pretty old and super cool. The inside feels like a big slice of history pie, with high ceilings, stained-glass, polished wood/marble/brass, and lots of artwork covering the walls. Founded in 1858, this café repeatedly appears on Top 10 Most Beautiful Cafes In the World lists, and used to be the stomping grounds of a bunch of Argentine artist/writer/musician types. The only one you might have heard of is Jorge Luis Borges. You haven’t heard of any of the others because you aren’t very cultured now are you. 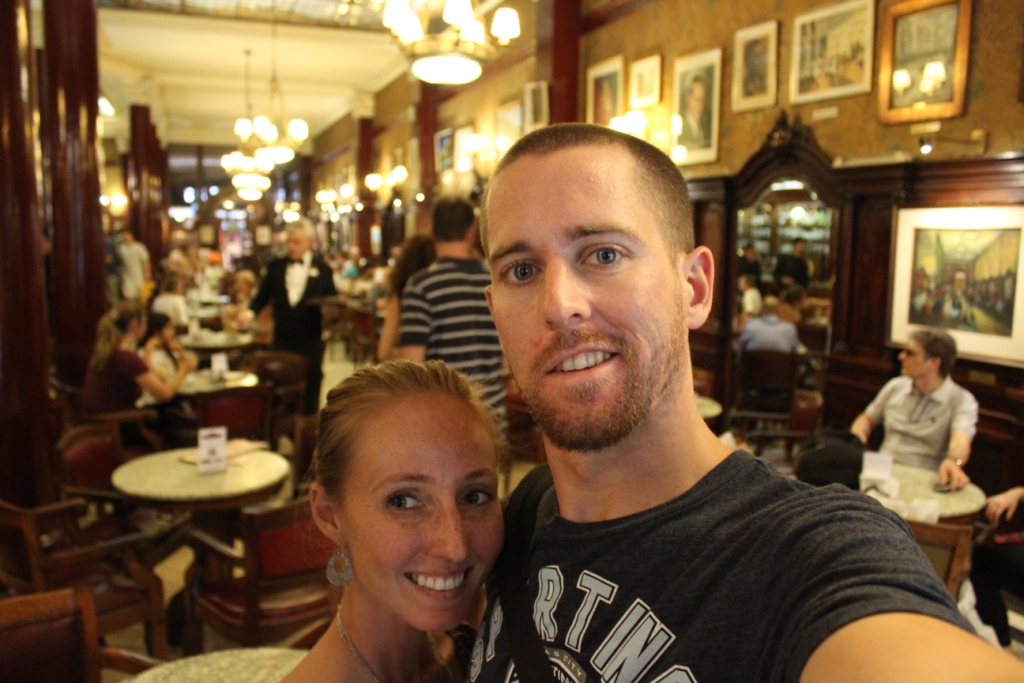 Bar El Federal in San Telmo is insufferably cool. No, it really is. This corner bar/café/restaurant was born in 1864. Inside it looks like 1864. It is in the exact kind of condition you want it to be in. That is, everything is in good enough shape that it is a pleasure to look at, with just enough rough-around-edges that you don’t hesitate to think all of the stuff in the place is actually original. The back wall is covered floor to ceiling with ancient looking alcohol bottles and jars of pickled food. They have outside seating and a bar. Their coffee and medialunas are amazing. THEY BREW THEIR OWN BEER! 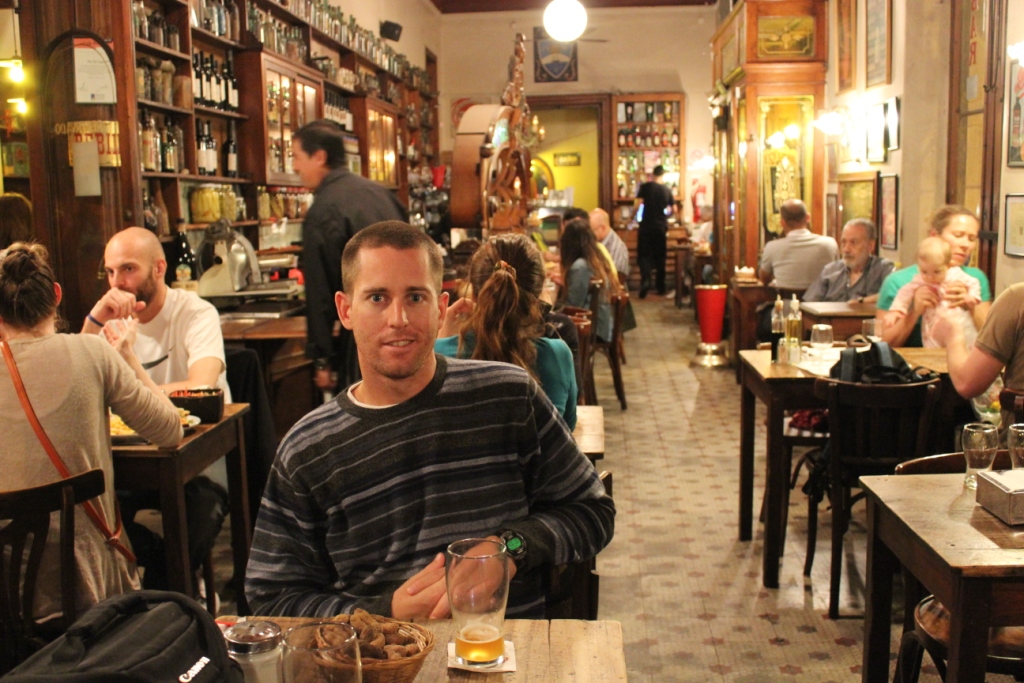 Bar Dorrego is another old ass bar/café/restaurant in San Telmo. I can’t currently find exactly how old it is, but I believe it dates to the 19th century. It is on a corner overlooking the picturesque Plaza Dorrego, and is very similar in style and vibe to Bar El Federal, although maybe slightly dressed down. 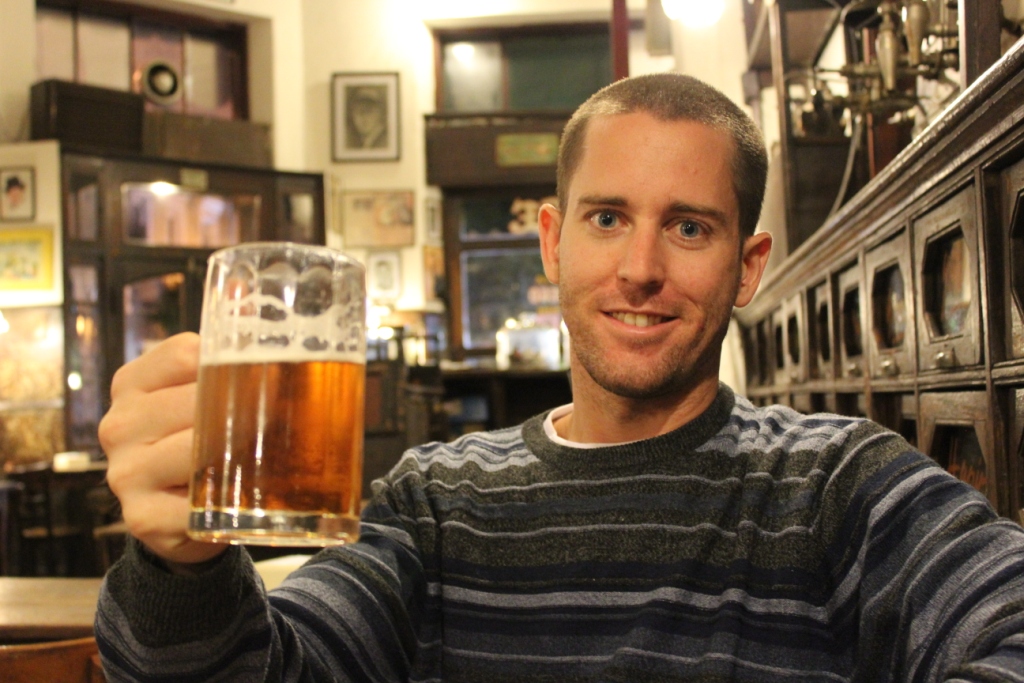 It’s not amazing pizza, by any means. They one guy who works there pretty much takes a crust, slops on some tomato sauce, adds a hunk of mozzarella and sticks the thing in the oven for five minutes, then takes it out, spreads the mozzarella round, and asks if you want oregano. The only topping you can get is onions for an additional 4 pesos. BUT DID I MENTION YOU CAN GET A WHOLE PIZZA FOR LIKE 3 DOLLARS?! There are apparently somewhere around 50 Ugi’s spread out across Buenos Aires. I’m not sure of the actual number because somehow in 2014 a business with 50-plus locations doesn’t have a website, but that’s beside the point. During our last 10 days in BA, Ugi’s accounted for approximately 33% of our caloric intake. 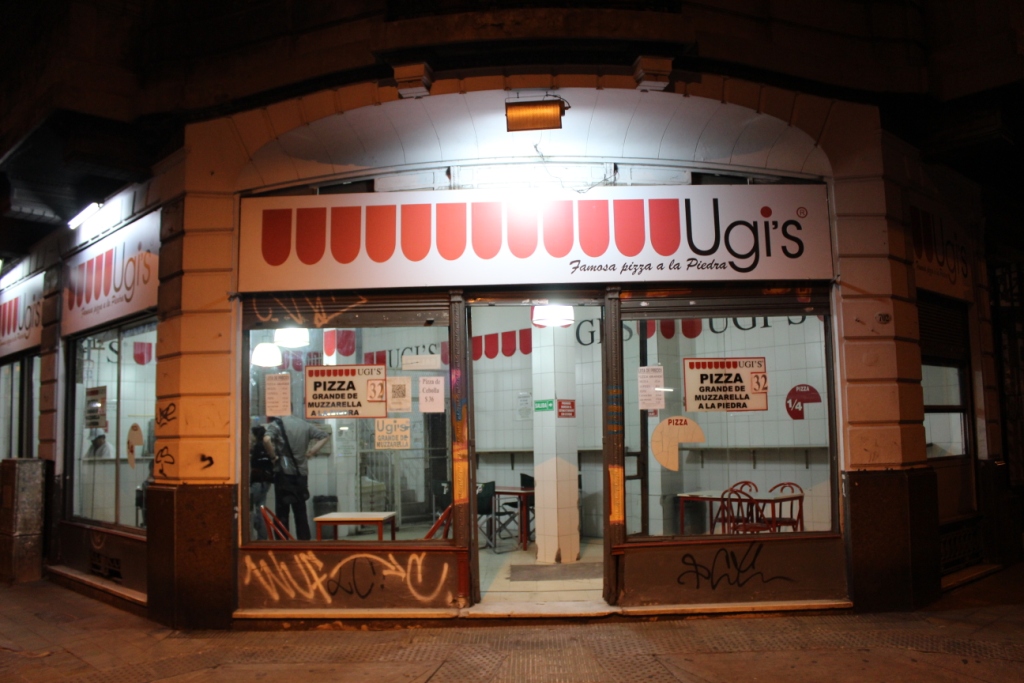 Used to be, if I had to choose a Dorito, I chose Cooler Ranch. No longer. Alosbifes has unseated Cooler Ranch from the top of my Doritos hierarchy. I cannot adequately describe for you the pure bliss that comes from putting an Alosbifes Dorito in your mouth. It’s like someone took the smell of grill smoke, captured it in a magic bottle, and turned it into a chip. It doesn’t taste like BBQ, it tastes like a barbeque smells. And too bad for you they only sell them in Argentina. The bag is blue and they aren’t that easy to find. Even if I wasn’t allowing myself to have chips, I would find myself looking in the chip aisle wherever we went just to see if they were there. If anyone is reading, you might want to start aggressively tweeting at Doritos to give Alosbifes a U.S. trial run. Please.