May 28th, 2014 | Posted by Brianna in Brazil | Everyday Essentials | Lodging | The Places We've Been

Rio de Janeiro is a big place with a lot of variation in neighborhoods. Our rental this month, which we will detail in more depth next week, is located between Leblon, Rio’s most affluent neighborhood, and Vidigal, a well known favela (slum). The house that we are in is technically in Vidigal (pronounced Vih-jee-gow), but its spot at the base of the hill surrounded by lush, green flora and directly across the street from the Sheraton Rio is something of a middle ground, feeling neither like the upper-class city streets of Leblon nor the impoverished cinder blocks of the favela. Elements of our daily life have been spread throughout these and other various neighborhoods during our month in Rio de Janeiro, and we are greatly appreciative of this balance of experience bases which has given us a look at multiple facets of local living in this part of Brazil rather than just a single perspective.

By no means am I prepared to approach a blog post about safety in Brazil while writing our monthly Everyday Essentials piece; however, I feel that it is important to note that at no point in the last 4 weeks have we felt unsafe. Vidigal was pacified two and a half years ago and the police presence, though certainly noticeable, is also a sign of security. It is not much different than the presence we have noticed in many other places along our journey except that their setups are nicer (they have tents, guys). 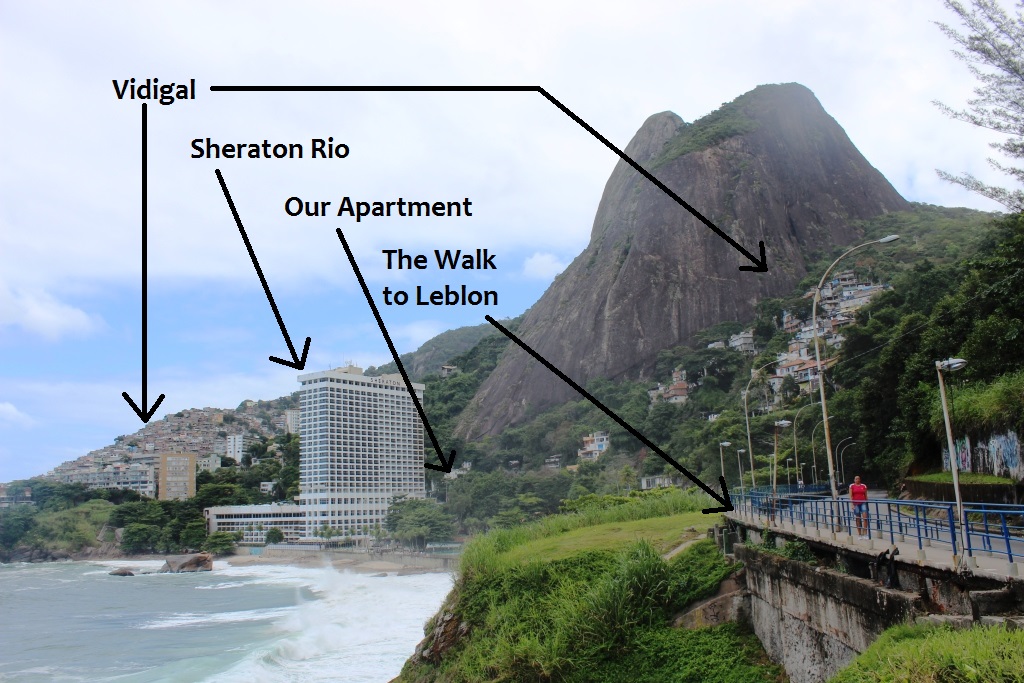 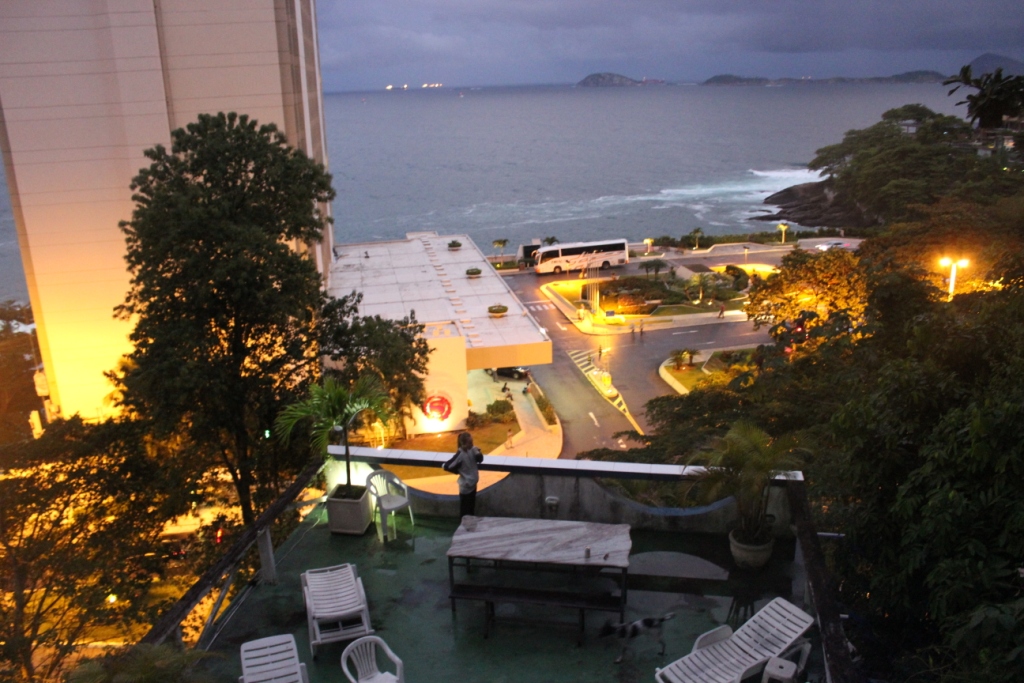 View towards the Sheraton from the upper deck at our house. 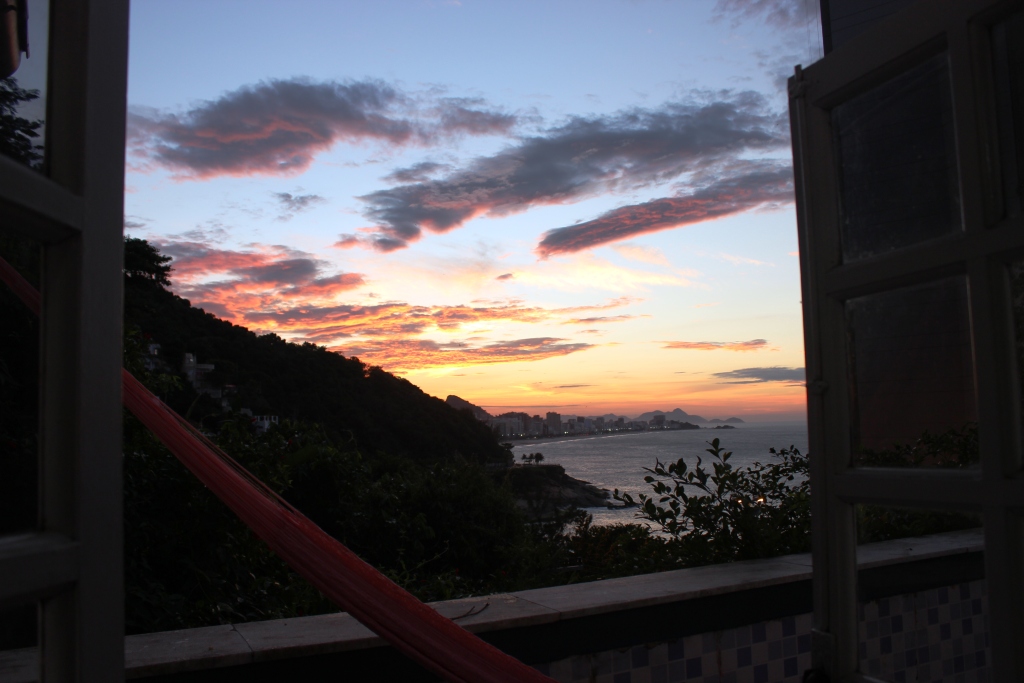 View from Our Apartment 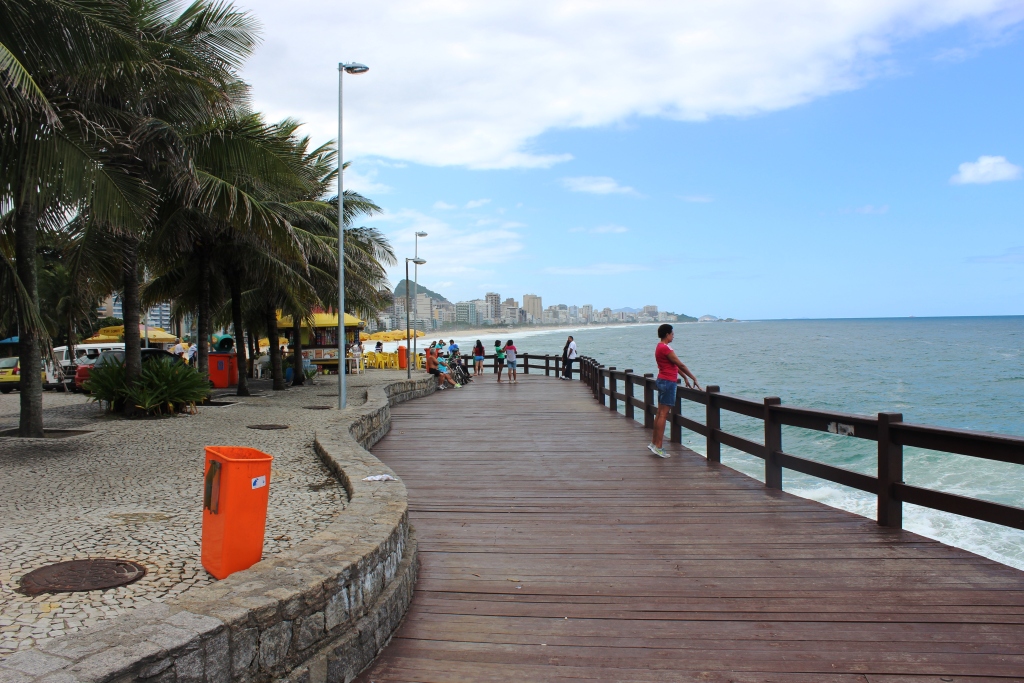 Our Walk from Our Apartment to Leblon Beach

Our grocery shopping has been split between two primary places this month: Zona Sul and Mero. Zona Sul is a big, well-stocked grocery store with many locations throughout Leblon, Ipanema, Copacabana, and other regions of Rio. Everything is aesthetically pleasing, specialty sections are enticing, and prices, while varying, can be pretty high comparatively. We shop at Zona Sul for items that we can’t get at Mero, like Haas avocados, cheaper soy milk, dairy-free bread, fresh herbs, and veggie-snob tomatoes and peppers. They also offer many specialty items that Mero doesn’t, but those are expensive so we don’t buy them. Mero is the closest grocery store in Vidigal. They have a pretty decent selection including fresh bread, produce, meats, dog supplies, and packaged goods, and their prices are usually cheaper than Zona Sul. We buy most of our groceries here each week and love that it’s just a couple of blocks away.

Water is maybe not that bad to drink here (??? read: we don’t actually know) but our kitchen sink has a filter, so we use that. The power and thus the internet, have gone out a couple of times this month. Nothing like the daylong outages we experienced in Central America though, so the 20 minute break every week or two doesn’t seem all that bad. Laundry was quite a bit more expensive here than elsewhere. The woman who cleans the apartments in our house has a washer and dryer at home and charges R$40 ($18.20 USD) for our giant duffel bag (our usual load when we finally get it cleaned). This price was consistent, if not less, than what we saw at launders in Copacabana. We do have a washing sink at our house, but with the rain and humidity here, drying is a long shot, so we opted to pay for non-moldy clean clothes instead. Probably a good choice.

Oh sexy Rio, a dream location for anyone of any shape or size who wants to exercise while abroad. I could write an entire post on how I think the sexiest thing about Rio is not the hot bods gracing the beach with their presence (and there are many of them), but rather the balance between ‘perfect’ and ‘imperfect’ bodies all comfortably working out in very little clothing in the same space. Here, it’s almost as though being comfortable in your own skin makes you more likely to be out on the strip in your tiny shorts or sports bra than being super fit does, and in turn, more likely to be active and moving in the direction of a ‘hotter bod’ (whatever that means to you – to me, it means healthy). From age 7 months to 70 years, six-packs to beer bellies, pasty white to cancerous tan, the beaches of Ipanema and Leblon host us all. As someone who values both a healthy lifestyle and also acceptance and beautification of all body types, this has been a glorious setting for workouts – not to mention the gorgeous surroundings!

From our house to Arpoador, the point between Copacabana and Ipanema (pronounced Ee-pah-nee-mah) famed for its surfing and sunset watching, is about 3 miles. Between is an uninterrupted sidewalk that runs along the coastline with a brief, rocky downhill from our house and then a long, straight, flat cruising stretch along the beach. To be honest, my first run in Rio had me completely shocked at how picturesque and movie-like it all was with volleyball and sand tennis, loads of runners and cyclists, and the beautiful blue water rolling against the sand (shout out to Angela for recommending we watch Rio – it’s kind of just like that). Along this stretch are also a number of workout stations with bars for dips, pull ups, stretching, and more.

We were surprised upon our arrival to see how many cars were parked on the street in Rio. Especially given the overwhelming amount of negative safety comments we have heard, this norm, which has been the case in few if any places south of the US, was not expected. However, our car has been parked among others on the street for a few weeks now with no problems. We’ve driven without trouble (though decent traffic at certain times) and also taken the bus with ease. From our place to Copacabana, the bus costs R$3 ($1.36 USD). 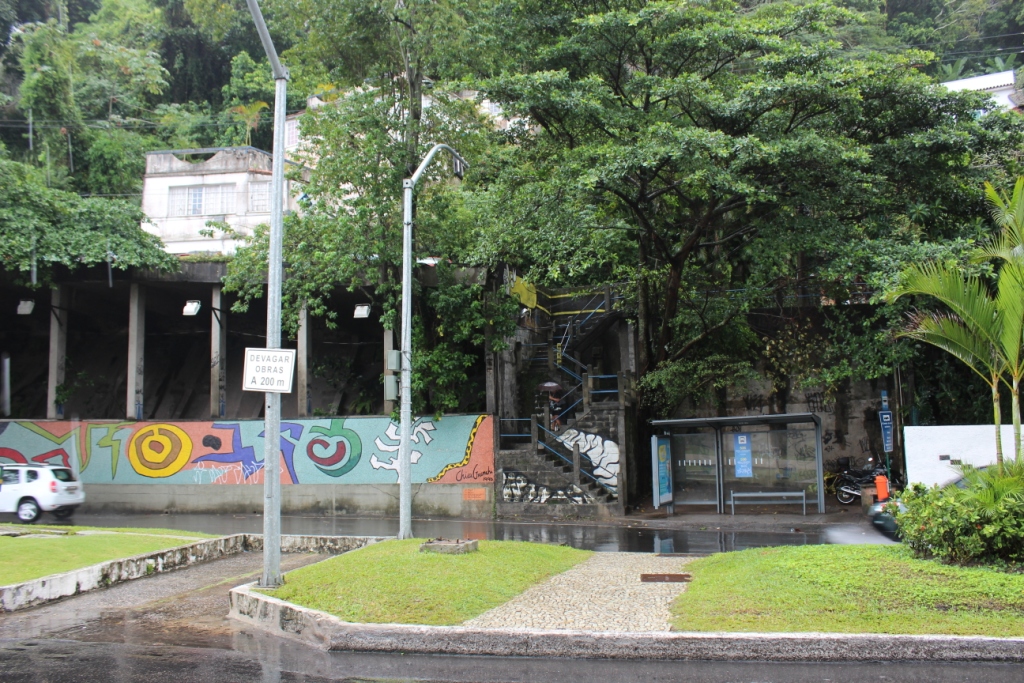 Looking at the bus stop across the street from the bus stop in front of the Sheraton. Our apartment is in the white house up the hill from the stop.