May 27th, 2013 | Posted by Brianna in Everyday Essentials | Guatemala | The Places We've Been

This month we’re renting a two room cabin just east of San Marcos La Laguna on a property that houses three cabins, six to eight apartments, and some live-in staff quarters. The Property Manager and Gardener are wonderful guys with a sunny disposition towards guests and always willing to help when needed. For the most part, we’re pretty low maintenance, but we do call on them for a few services that tenants are nearly required to utilize on site. Refills of our 5-gallon water jug cost $3 USD (for some reason USD is the currency that this Guatemalan property run by a Frenchman operates on most of the time), which is a dollar more than we were paying in Mexico and might pay elsewhere in the country. Laundry too is a bit pricier here and took a couple of days, but it was taken from our door and delivered back to it, and what can we say, we’ve gotten lazy with our laundry. A month rental here also includes required cleaning service twice a week, which we paid $36 USD for as part of our rent total. The women are wonderful and make our May home feel completely refreshed each time they visit. As people who wouldn’t opt-in to such a service had it been a choice, we sure are enjoying having it!

Our grocery habits this month have been less consistent than usual; we’ve changed our menus a bit based on product availability, but we haven’t had any trouble finding a broad range of foods. So far, our groceries have come from four main sources: the produce market in Panajachel, Chalo’s Grocery in Pana, a handful of small abarrotes in San Marcos, and the vegetable garden at the property we’re staying at. There are also a couple of locals selling small amounts of produce on the walkway to the San Marcos dock and a couple of Walmarts in Guatemala’s larger cities, neither of which we’ve visited yet, but our host recommended them as the cheapest place for groceries. Pana’s prices and variety at the market and Chalo’s were definitely the best we’ve seen around the lake, but it’s a 40 minute lancha ride each way and costs 50Q ($6.40 USD) per person roundtrip, which offsets the savings a bit. We stocked up on one trip early in the month and then braved an afternoon return on choppy waters with three huge, heavy bags of groceries. The tiendas in San Marcos have fewer options and are more expensive, but they certainly cater to gringos selling all kinds of treats from Kraft mac-and-cheese to Ghirardelli brownies and brand name breakfast cereals to “fine” cheeses. We’ve done pancakes a time or two. It’s not difficult to find something enticing. Last, but certainly not least, the property gardener, Diego, has delivered us a few orders of fresh veggies, usually beets, but sometimes spinach or lettuce or basil or cilantro too.

Ian wrote a brief introduction to San Pedro in his post about towns around the lake. San Pedro is kind of like our life source. When San Pedro has power, we have power. When San Pedro is dark, we are dark. When San Pedro has internet, we have internet. And when San Pedro is disconnected, we are disconnected. For the most part, we’ve been pretty happy with the speed and consistency of the web connection, not even having to allow any leniency for the fact that we’re at a small property on the side of a lake in Guatemala. That said, we have lost power a couple of times, once for an entire day in which we were forced to spend 100Q ($12.80USD) on a lancha to Pana to work (San Pedro was not an option, because if we’re out of power, chances are pretty good that it’s because they are). The power outages, though apparently not always tied to weather, have seemed to be due in large part during our time here to passing rain which comes many evenings for an hour or two. 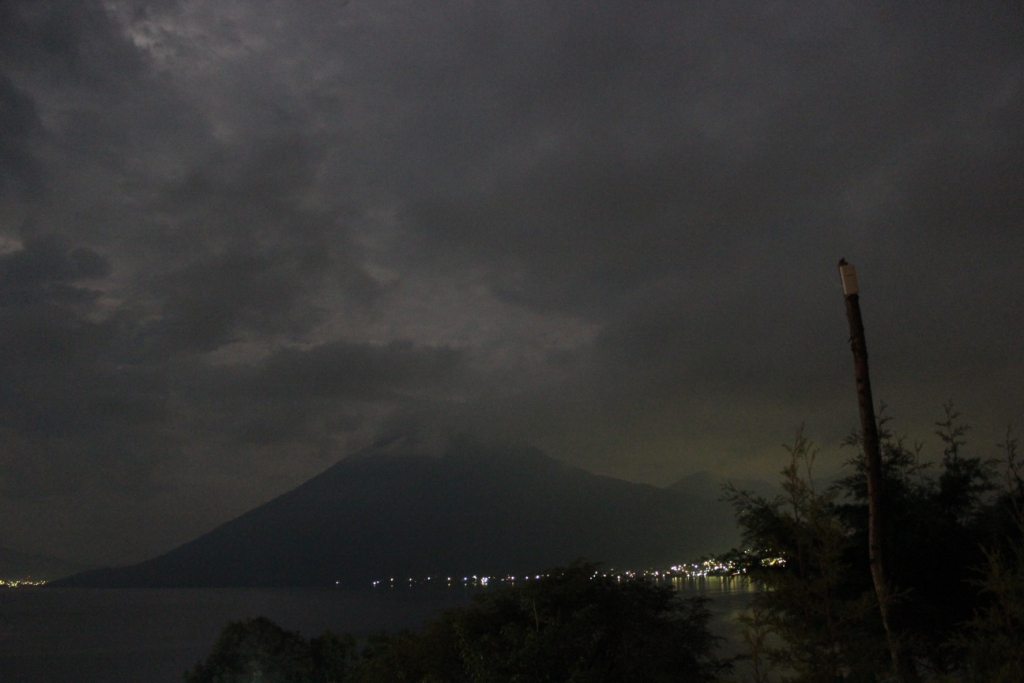 The lights are the town of San Pedro across the lake. The box at the top of the pole in the foreground is our access point.

Though most of Lago de Atitlán’s towns are now somewhat accessible by road, transportation between lake towns is primarily done via water taxis called lanchas, which are motor boats with 5 rows of covered seats that pace the lake from just after sunrise to just before sunset. Fees are charged to riders based on three different categories – local Guatemalans, foreigners who now live on the lake, and tourists. The fact that internally we feel like we are foreigners living on the lake this month means very little; we pay the tourist fee, which varies from 15Q ($1.90 USD) to 35Q ($4.50 USD) each way. 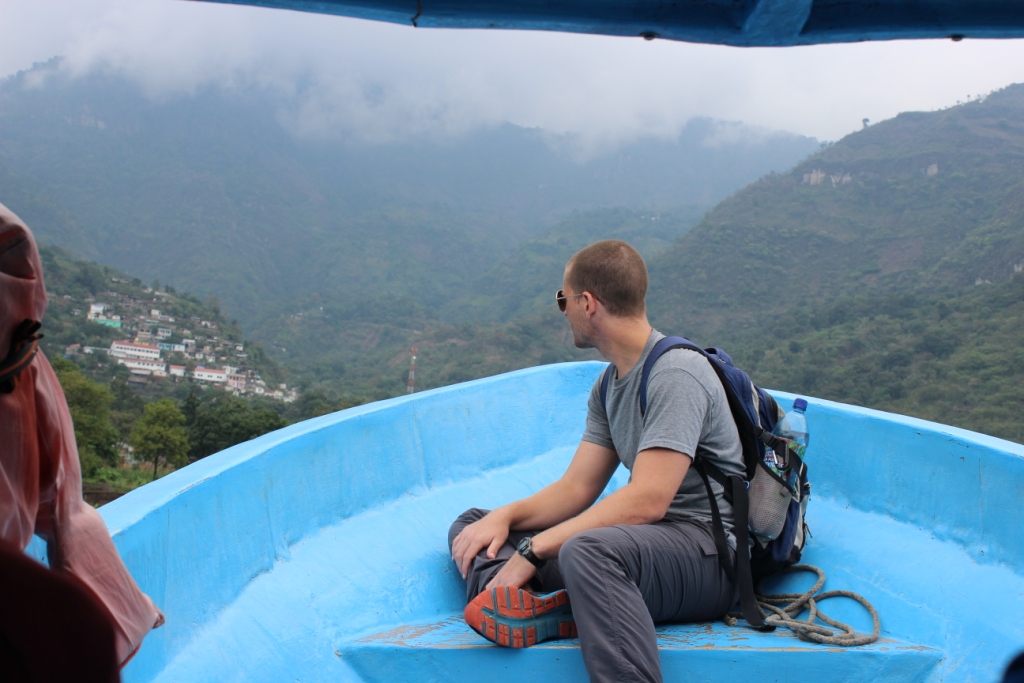 Ian at the front of the lancha heading to Panajachel.

Our cabin is on a hill – a very steep hill. One way down is smooth but short, the other way down is rock and bumpy and asking-to-turn-an-ankle, but long. Ian has used this to his advantage, working the incline, scaling up it in both sprints and long runs. I, on the other hand, have used it as an excuse to focus all of my energy into yoga. Both have been great for us, and we’re feeling healthier and more in the habit of exercise each month. Aside from treading water, yoga has really been the focus of my physical education this month. Ian, in addition to his hill sprints and volcano “road” runs, has also spent some time kicking around at the soccer field in town and developing some great nomadic workouts that involve large rocks and other awkward, heavy objects he’s found by the dock (think Crossfit Central America style).