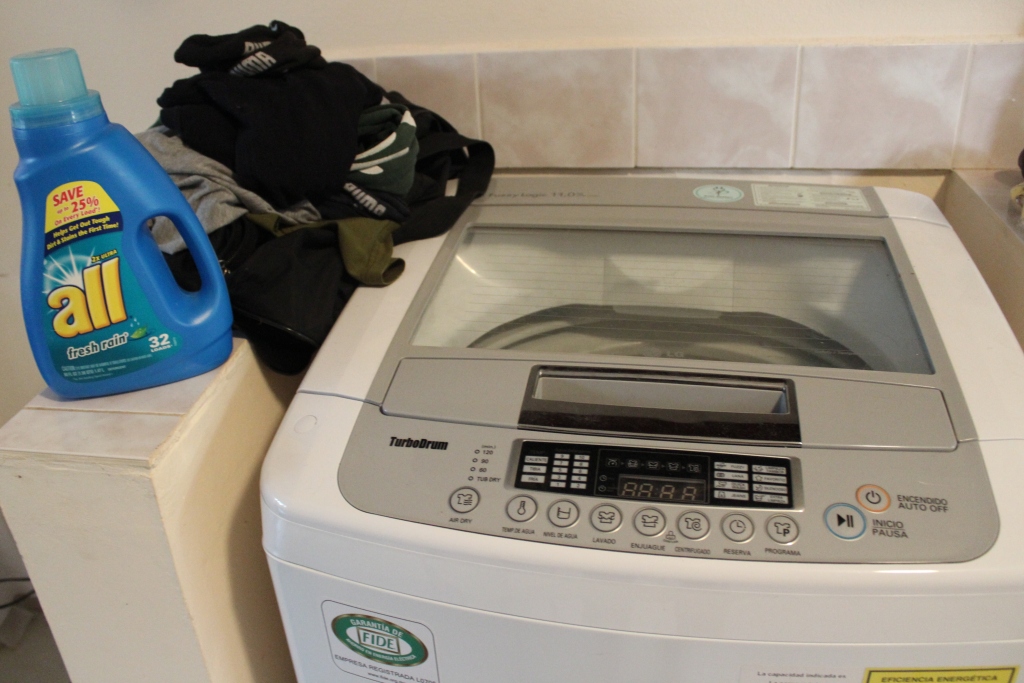 Grocery shopping has been relatively easy this month with a handful of stores to choose from in La Ceiba. Our favorite is Paíz, a large, well-stocked, decently priced supermarket near the city center. A number of local expats have told us that it is not atypical for a store to have a certain product one week and not the next, but this hasn’t been much of a problem for us. In general, there are far more American items here than we have been used to the past few months, so to us, it feels a lot like shopping in the states.

Our 5-gallon jugs are quite cheap to refill here at 20 lempira ($1 USD) each. We can purchase fresh water at the neighborhood convenience store, or if we run out at the right time, a truck comes by every other day to exchange full jugs for empty ones. After realizing that we were here, the young man who works on the truck has started to knock on the door when they come by to see if we’re due.

A fun luxury of our June casita is its washing machine. This, of course, is a great convenience that has kept our socks and underwear supplies above the “oh shit, we need to do laundry immediately” threshold. Drying, though, is a completely different story in that it doesn’t exist here. Things do not dry in this level of humidity; they only get more or less damp, and dampness control is an art we have yet to master. Previously dry clothes, for example, those we brought with us from Guatemala, vary between “wow, this feels almost dry” and “why the hell is my t-shirt wet?” Freshly washed clothes, on the other hand, (and by freshly washed I mean cycled through the machine with a mixture of our detergent and some fairly unpleasant smelling, rust-colored stain causing water) rely on the spin dry setting on the washer, relative thickness of the material, and exact humidity level of the day on which they are hung to dry to determine whether or not they will near the “less damp” end of the spectrum fast enough to not smell. The shoes Ian ran in the rain with are a lost cause.

As usual, power and in turn, internet, are a bit less consistent than we’re used to; however, we’ve had a pretty good connection this month and have appreciated being able to Skype clearly and work regularly. There has been one full-day scheduled outage during our time here, as well as one full-day unscheduled outage. Here in Honduras, the internet isn’t the only thing we miss when the power goes out though. Air conditioning and fans are also on hold when the lights go, so we’ve been reminded to count ourselves lucky to have those creature comforts the majority of the time.

We’ve continued our habits from last month of yoga for me and a combination of running and Cross Fit Central America (tree branch pullups, cinder block lifts, etc) for Ian. Though we don’t have the hills this month, we do have heat and high humidity which makes even the walk to the pool feel like a workout.

Pulperías, Shopping, and the Mall

On our first day in La Ceiba, a neighbor whose internet we were using before ours was up asked us as she climbed into her car if we needed anything from the pulpería while she was there. Um… what’s a pulpería? We’ve been told a number of times throughout our time in Central America not to compare the countries, because while they seem similar from a North American perspective, each nation is an independent culture with unique social, political, environmental, and edifying characteristics. While I agree that states should be recognized as the distinct and individually complex entities that they are, it seems erroneous to believe that any experience can be had or learned from separate of any other encounter or experience of our pasts. When we don’t know what a pulpería is, it is explained to us in terms of how it is similar and/or dissimilar from other points of reference within our current field of knowledge. These idiosyncrasies, our perceptions of them, and how they compare with the quirks of other countries, is how we (the proverbial we) come to define a given culture or region. Pulperías are tiendas of Lago de Atitlán, mini supers of San Cristóbal, abarrotes of San Juanico, small neighborhood stores of New Orleans. They sell Coca-Cola and packaged sweets and cigarettes, among other things. In our neighborhood, products are sold through tiny windows of small buildings which are often among housing, and we’ve become especially fond of one a few blocks inland from us where they sell beer and seem to like us. Pulpería was a new term for us, but Google says it’s not just a Honduran thing and that we will see more of them as we head further south.

Some things just can’t be purchased at a pulpería though, so when Ian decided it was time for new running shoes, we headed to the mall. Going to the mall was something we rarely, if ever, did in the states, because, well, we’re not really shoppers anyway and malls are like giant, anxiety-inducing, consumerism soaked, hell pots. But that said, we’d been to the mall in La Ceiba a time or two before to escape the heat when the power was out and to sample the baleadas in the food court and found it to be like stepping back into a strangely comfortable familiarity. Think about your local mall. That is exactly what La Ceiba’s mall is like. Popeye’s in the food court, teenagers trolling for other teenagers, overpriced see-through t-shirts, even that buy-more-stuff mall smell. Having not seen many Asics in the last few months, the selection at SportsLine (Finish Line) was very convenient, and Ian is now sporting some really sweet new running shoes. In fact, shopping, though it doesn’t happen often, is an everyday essential that we’ve come to enjoy a little bit more throughout our travels. 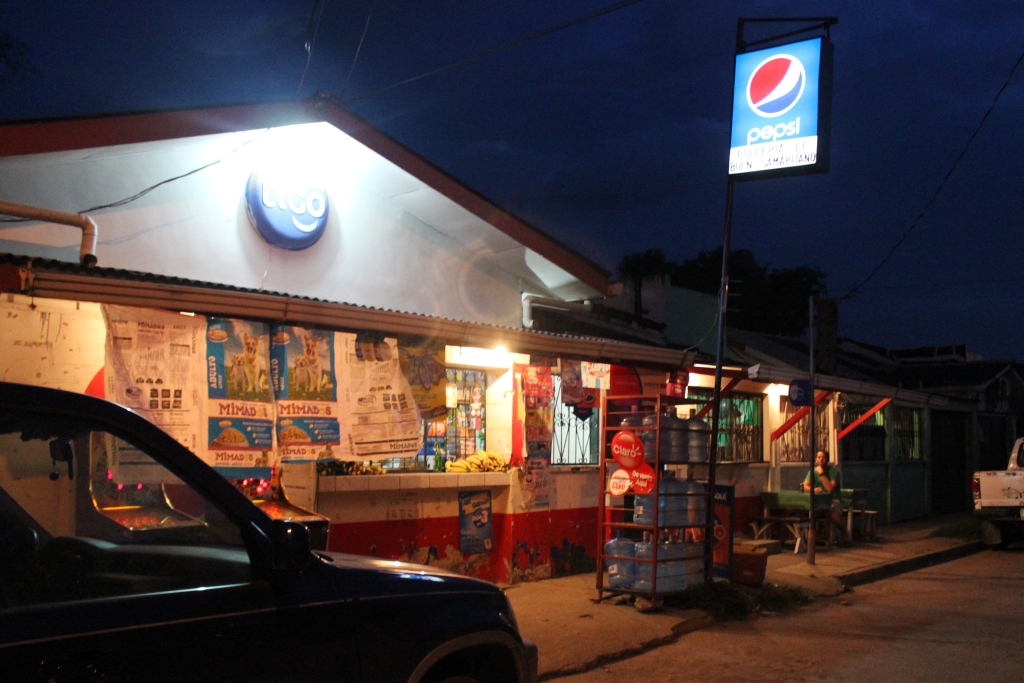 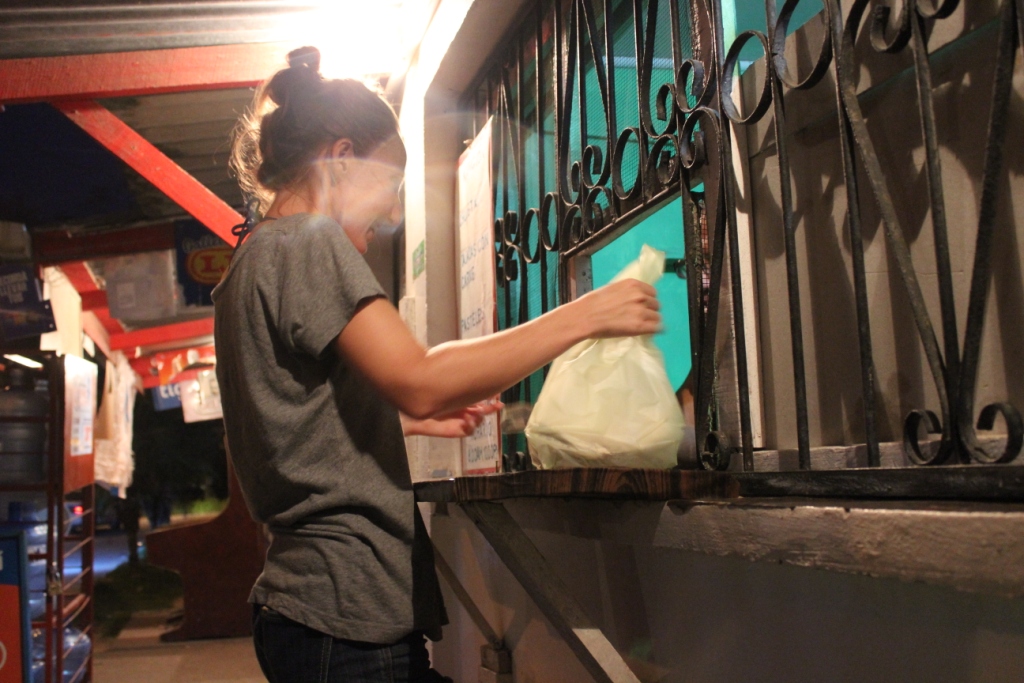 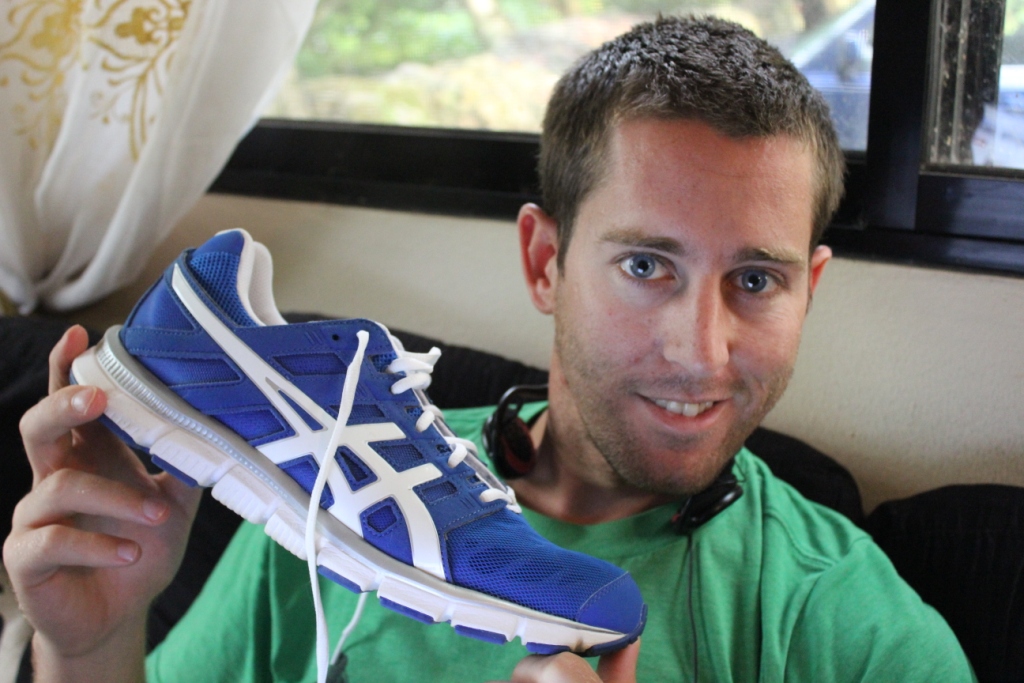