Power and internet have been shaky again this month after a few consecutive moves without problems. We’ve lost power a handful of times over the last couple of weeks, twice for extended periods of time. The first outage occurred after a bulldozer that we were watching work from our 5th floor window in the construction zone across the street hit a power line and knocked out electricity to few surrounding blocks early one afternoon. The workmen stayed in the lot until they fixed it at 10PM. The second long outage seemed to effect only our building and took a full day before we were back up and running. Naturally, when the power is out, so is the internet. Even with power, we’ve had a few days where the internet is either maddeningly slow or just drops every few minutes. We won’t complain too much though. When the internet is working well, it definitely meets our needs. 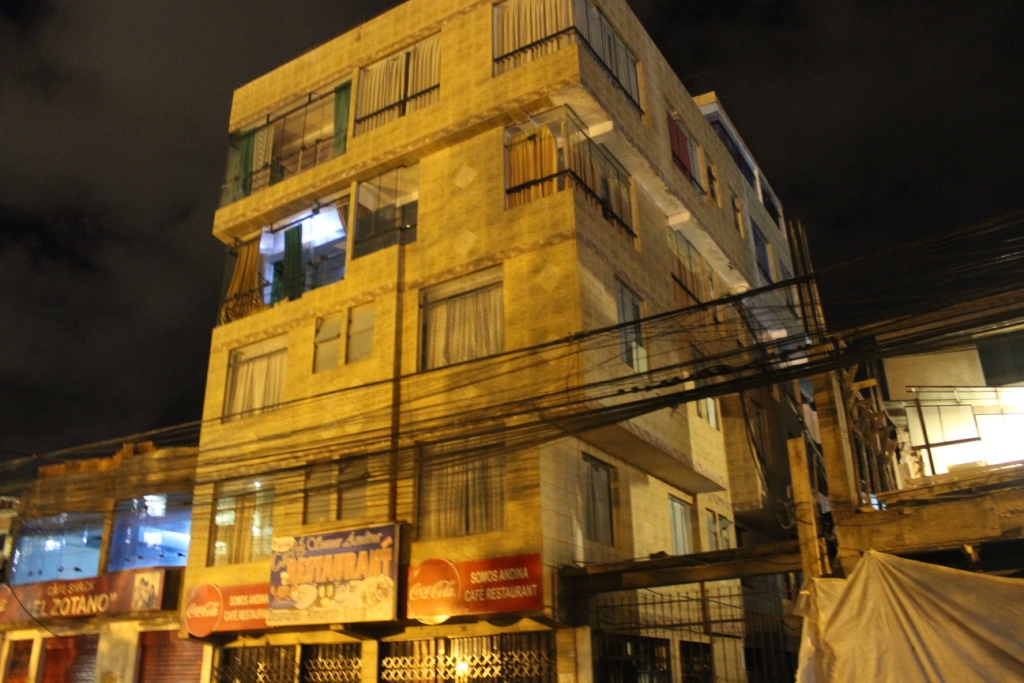 Our building during the "our building only" power outage. The Germans who are staying the floor below us had some pretty impressive back up lighting!

To be honest, we’re still not entirely sure how most people in our neighborhood handle their drinking water. The tap water is certainly not drinkable (and also, a few hours of every day there’s just no water coming from our faucets at all), but unlike most of the places we’ve stayed without potable water, there doesn’t seem to be a normal system of containers for purchase. The grocery store a couple of blocks down the hill sells refills of 20 liter containers, but our check out girl laughs at us for how often we buy them and we’ve never seen anyone else do so. On top of that, Ian has to carry the giant container of water back up the hill every couple of days. In some countries we’ve stayed in, there have been delivery guys that roll through and swap out empty containers for full ones, but we’ve never seen that happen here either. Our guess is that people must be boiling their tap water to make it safe for drinking. This would certainly be cheaper (20 liters of agua pura here is S./12 or $4.32 USD, more than double what it was in Mexico and Central America), but we’ve avoided that path for two main reasons. One is because it is time consuming, and we drink a lot of water. Between two humans and two dogs and all of the rice, beans, and soup we make, we would spend all day boiling water in the two tiny pans we have. The second reason is because the tap water leaves a white residue on everything, especially after it is boiled, and that just weirds me out. I mean, I do hail from the town that officially boasts the world’s best tap water.

There are a couple of decent sized markets in Cusco, but we don’t live near any of them this month, so instead we do our shopping at a few different grocery stores. We’re definitely challenged this month to make due with what we can find as the places we buy our groceries have relatively limited selections, especially in terms of items we’re used to. We often base our meals on local goods, but are able to supplement them with familiar supplies (for example, peanut butter, nuts, coconut milk, soy milk, etc have all been readily available until this month), while this month our neighborhood’s selection has pushed us to try some new sauces and combinations that have turned out quite well!

Granted, we’re in a residential neighborhood well east of the centro, but there are a lot of street dogs in the surrounding blocks. Most of them are pretty cordial; they lay in the doorways of the shops of their owners or hang out lazily on the sidewalks. Everyone once in a while you’ll see a pair happily wrestling with each other or a single scavenger digging through some trash. At night though, the streets get mean for a roaming pup. We know this because we can hear it. Terrible dog fights and yelping every few nights as we fall asleep. For our dogs, it means unfortunately limited time outside. We take them down to the bathroom twice a day, where they go on the small patch of grass directly in front of our building, and we’re lucky to have a rooftop terrace where they can play (under strict supervision so that Maya doesn’t jump) as well. Ian seems to think that the dogs are mostly harmless, but that’s probably because they don’t chase him while he’s working out. Even a puppy tried to bite my heels. Thus, my newly developed fear of dogs.