November 6th, 2013 | Posted by Brianna in Ecuador | Everyday Essentials | The Places We've Been

Our meals are largely comprised of whole foods like produce, grains, and beans, so we’re thrilled when we land in a city with a good market, and Cuenca has multiple to keep us happy. The two we’ve frequented are the 10 de Agosto market in the centro and Feria Libre, Cuenca’s largest market located just a few blocks from our second apartment. Stall after stall after stall of produce, meats, dry goods, seafood, clothing, live animals, sweets, toys, the list goes on and on. We’ve seen many markets during our journey and Cuenca’s certainly do not disappoint. Entire sections of the markets are dedicated to potatoes. Some of the seafood is still moving. The herb section on the second story of the 10 de Agosto market engulfs visitors in fantastic smells, nearly making you forget the reeking slabs of animal flesh you walked by on your way there, and the pet section at the Feria Libre can be likened to a ball pit, full of furry puppies instead of plastic spheres. During our first visit to Feria Libre, we walked through a large part of the market only to find an even larger part on the other side, and this happened over and over until we’d perused several blocks worth of market. We’ve heard that we’re supposed to haggle, but it’s hard to want to do so when all of our groceries for the week, loads of fresh vegetables, bags of quinoa, dry goods, fruits, and blocks of peanut fudge treat, barely set us back $10 USD. 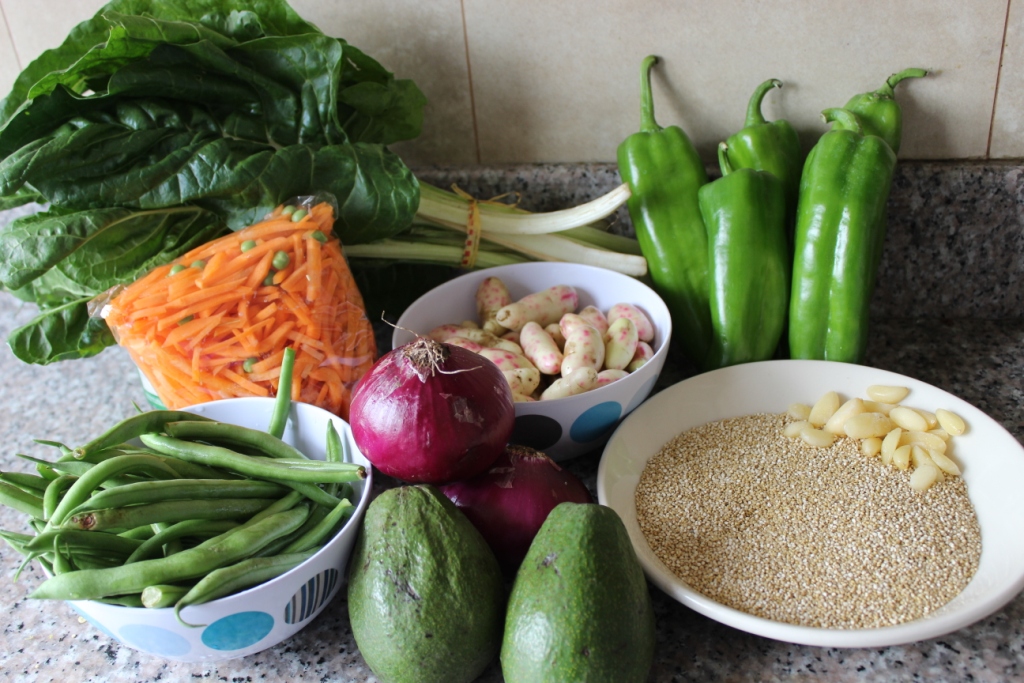 Some veggies and quinoa from the market.

Gasoline in Ecuador is cheap! With government subsidies, the current price per gallon is $1.48. No joke.

Cuenca isn’t an especially tough city to drive in (though in all fairness, not many cities would seem difficult to drive in after a cruise through Medellín). Even so, we haven’t spent any time in the CR-Van this month. The parking spot that we requested before arrival is safe, gated, and only a block away; however, it is also inside of the gated property of an expat family of 7 that is also renting from our landlords. We feel terrible bugging them to let us in and then let us out and then let us back in again, so we just haven’t. Instead, we’ve walked or taken the bus wherever we’ve needed to go thus far. Fortunately for us, Cuenca’s bus system is reliable and easy to navigate. For just $.25 per person, we can catch the number 19 to the centro at the stop a few doors down. Three cheers for public transportation. 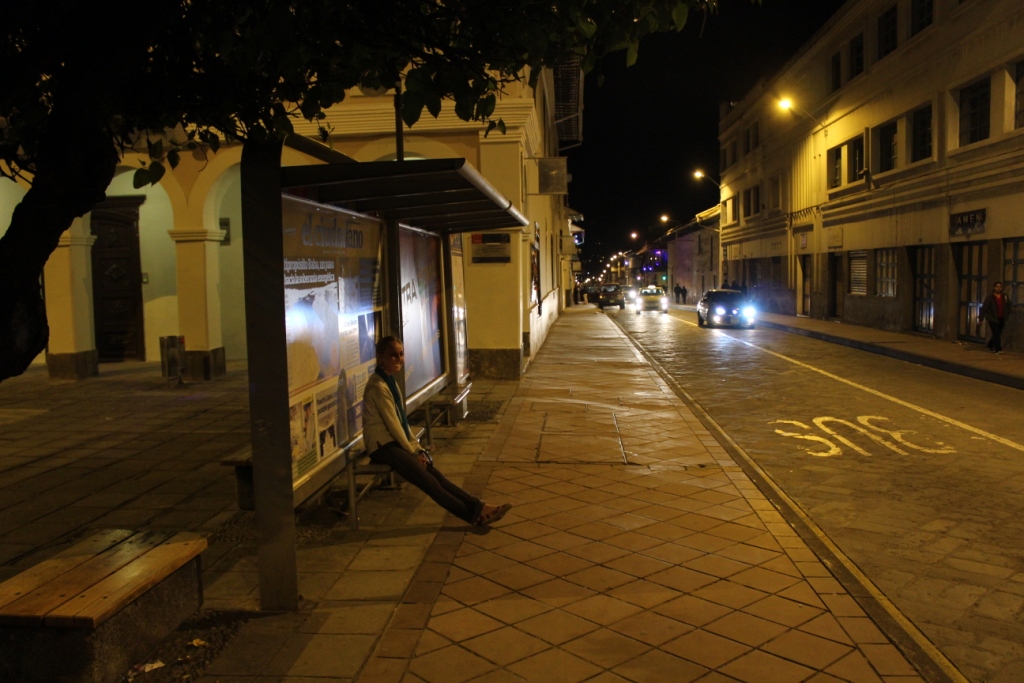 Waiting for the bus at our stop in the centro 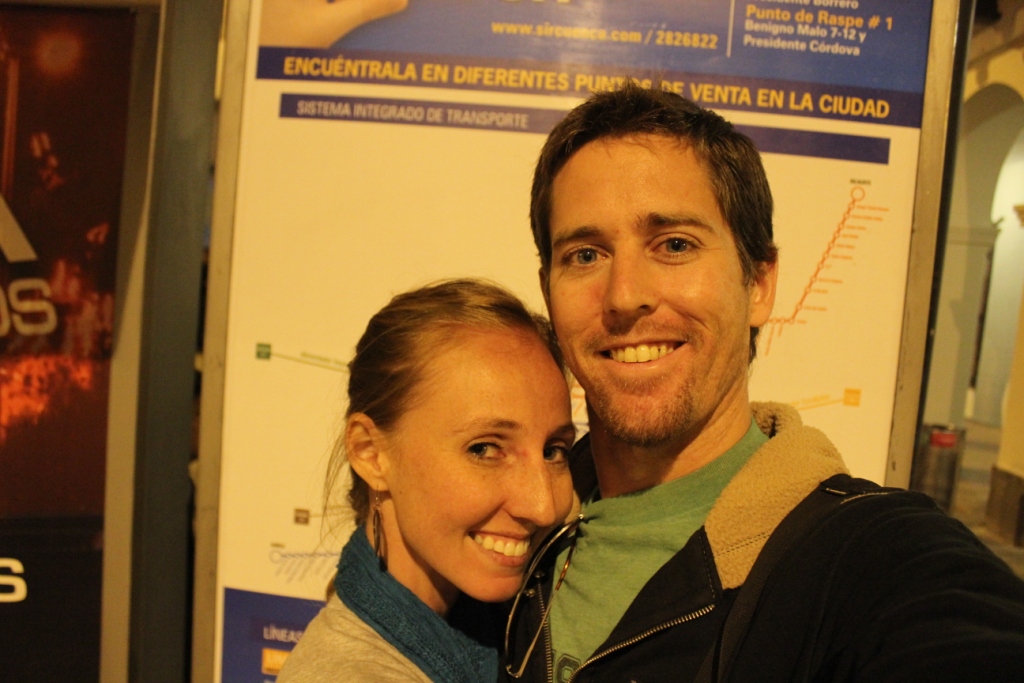 In love at the bus stop

Cuenca’s Tomebamba River is flanked by beautiful grassy areas where citizens can relax, enjoy nature, exercise, play, do laundry, etc. Trails along either side of the river stretch for miles and run directly through the middle of town. Our apartment is just three blocks south of the river on the west side of town, and at the location where we would access the trail is also a small park with permanent exercise equipment and a small loop for running. This has been a core part of our activity routines this month in addition to yoga and other exercises that can be done at home. One night while taking the dogs out we noticed a small gym a few doors down as well that we had never seen before. Upon asking, we learned that the equipment (a treadmill, free weights, and a number of  other machine-type things) is available for use from 7PM to 9AM for $1 per day or $12 per month. Finally, during our first week in the city when we stayed in an apartment in the centro, Ian exercised daily at Parque de la Madre, a large park with an unofficial three-lane track, permanent exercise equipment, lots of free space, and occasionally some dinos. 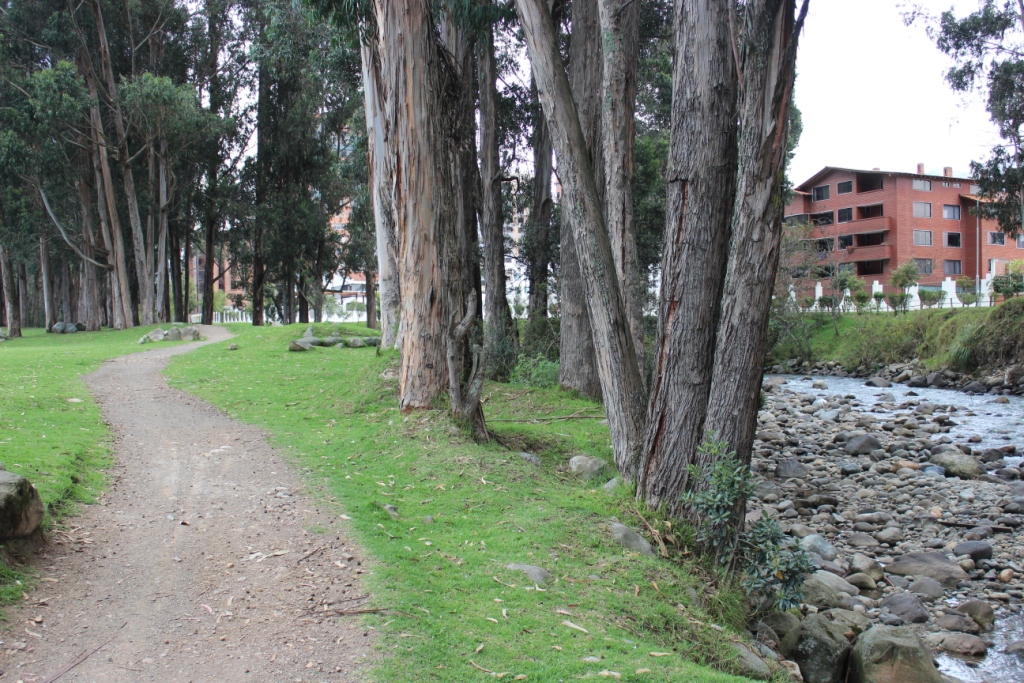 Trail along the Tomebamba River near our apartment. 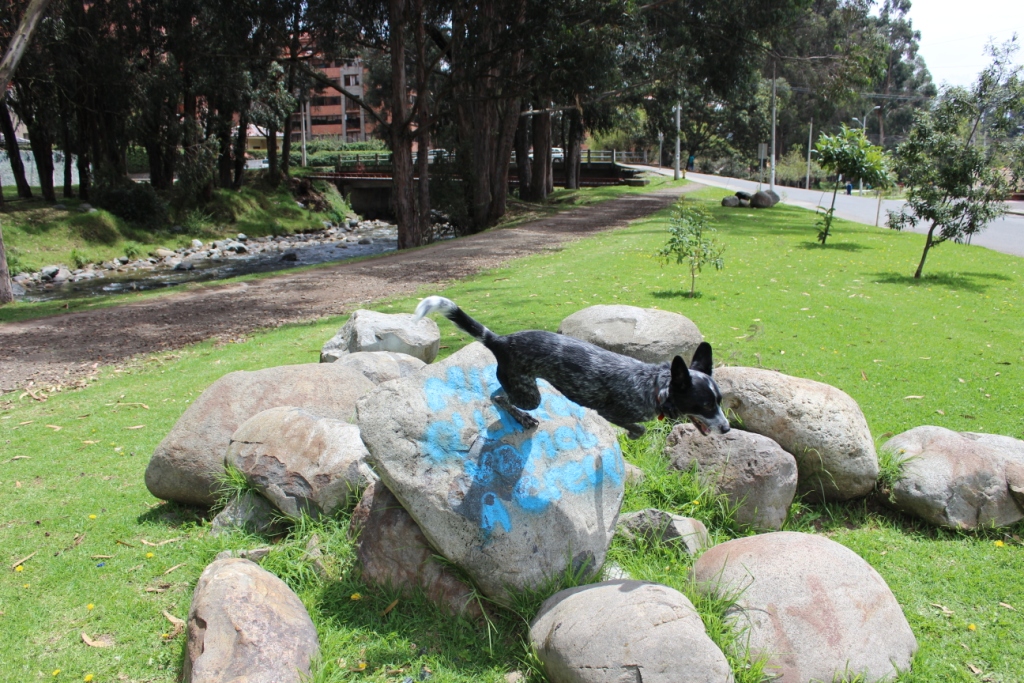 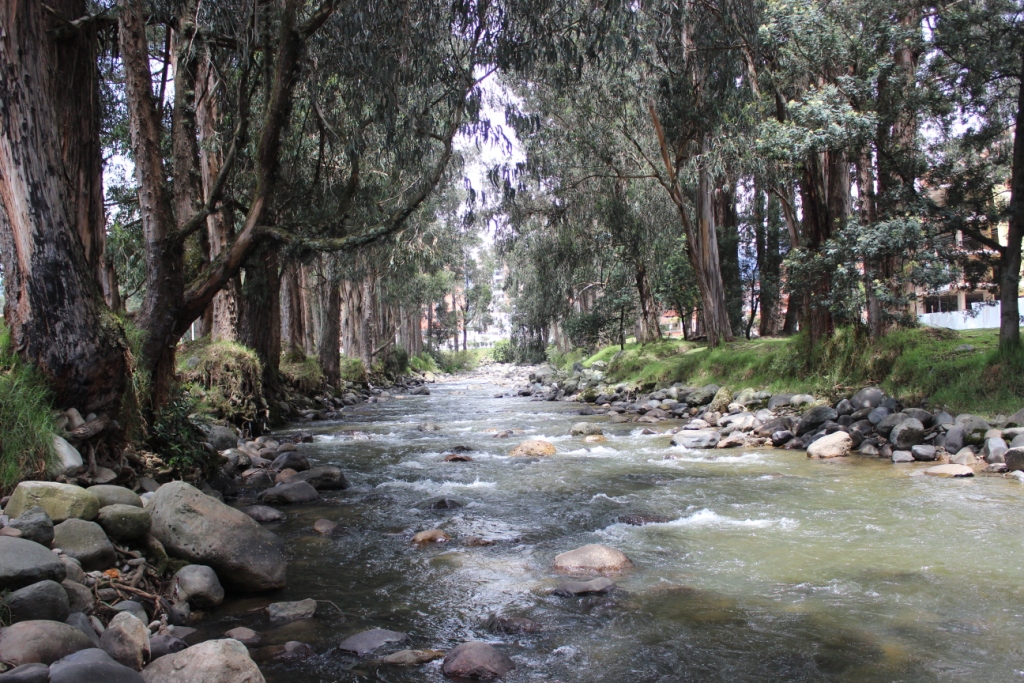 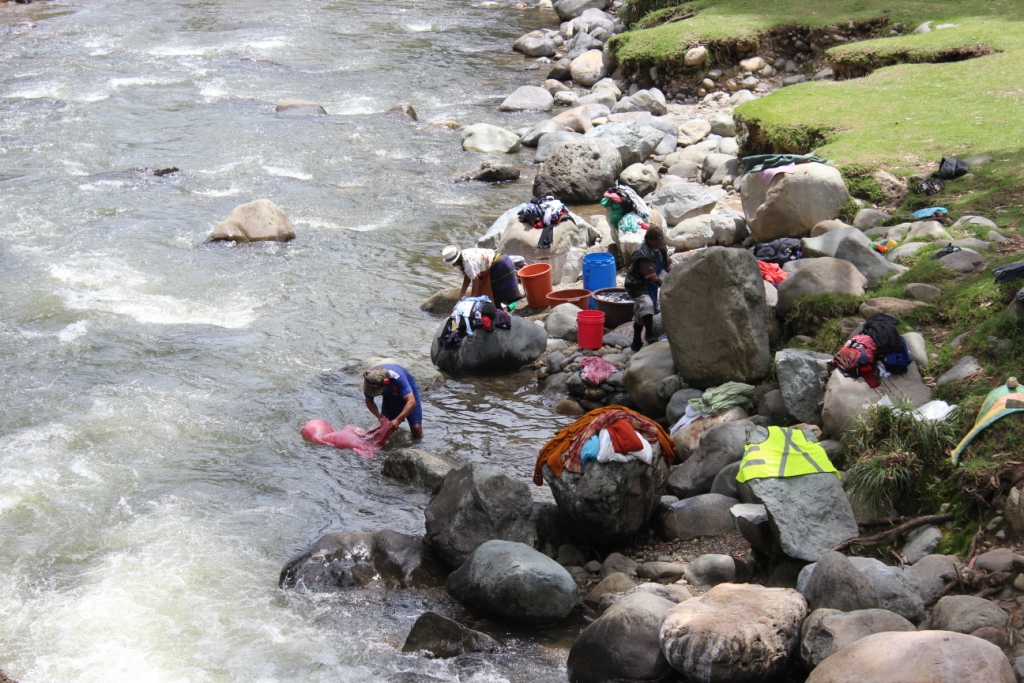 Laundry time at the Tomebamba 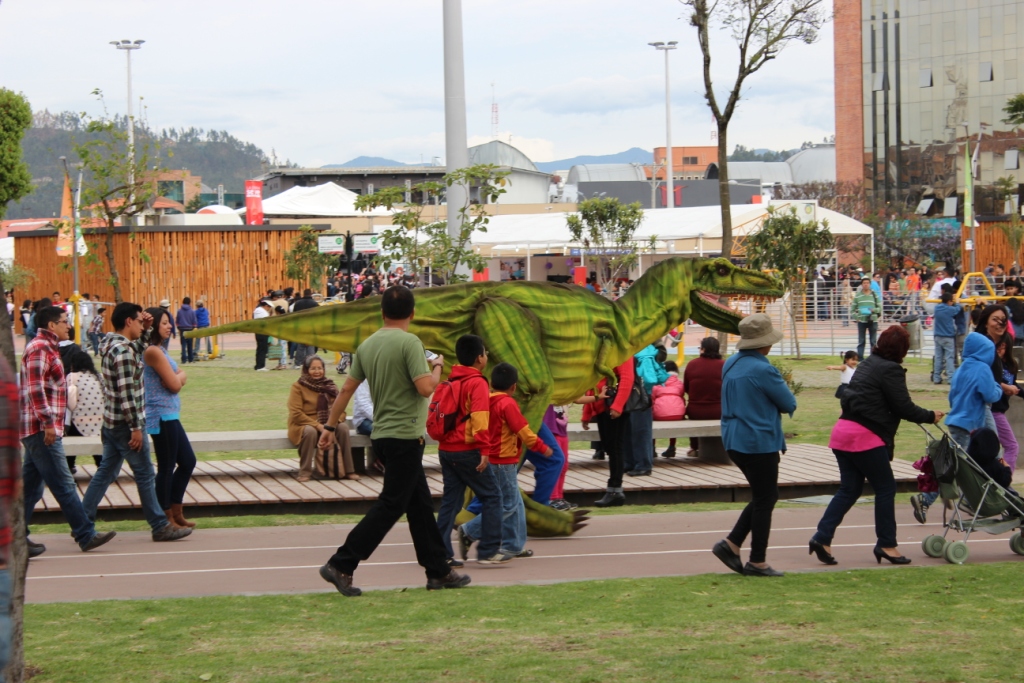 Supposedly the internet connection in our neighborhood is usually quite consistent, but within a day of moving in, we had no access, and when it did come back, the speed was so slow that we couldn’t complete many of our daily tasks without a trip to a coffee shop in another neighborhood. The issues lasted for a couple of weeks and then suddenly one day the speed was back up and we were flying! Overall, Cuenca has completely satisfactory internet for even the needier digital nomads *cough*Ian*cough*, and it does appear that our situation was at least somewhat atypical.

These three items form our “things that were pretty regular” category. Our apartment came equipped with a private laundry room, water from tap is said to be some of the best in South America, and the power never went out. Too bad we couldn’t put the internet in this section.