April 9th, 2014 | Posted by Brianna in Everyday Essentials | The Places We've Been | Uruguay

Food is expensive in Uruguay. Most of our readers will find these to be average prices, but after a year of cheap produce and other basics, it has been a shock to our system (and budget) to be paying 35 Uruguayan pesos ($1.60 USD) for a small bag of oatmeal, 25 pesos ($1.15 USD) for an avocado, and 58 pesos ($2.65 USD) for a liter of beer (yes, that’s still only $.90 per 12oz equivalent, but we were paying $1.60 for an entire bottle of wine last month, so our expectations are now pretty unrealistic). When we’re smart about it, we can make good grocery choices that keep our bill fairly average, but overall, this month has been a harsh reminder of the ways in which some of our expenses are certain to increase when we’re next in the states. Prices aside, the selection is decent with lots of whole foods and plenty of junk too. There are three medium sized grocery stores and a produce shop all within just a few blocks of our flat, and we frequent them almost daily (though some of the cashiers at Super USA can be super unpleasant, and we recommend Micro Macro or Económico instead). In addition to these stores, we were lucky to happen upon a small café with a nice selection of well-priced, often organic whole foods in the historic district. If you’re headed to Colonia, visit Deli de las Rosas for a delicious coffee at one their adorable but casual outdoor seats, and then grab some nuts or tea from inside before leaving. The owner who runs the cafe is an absolute gem. 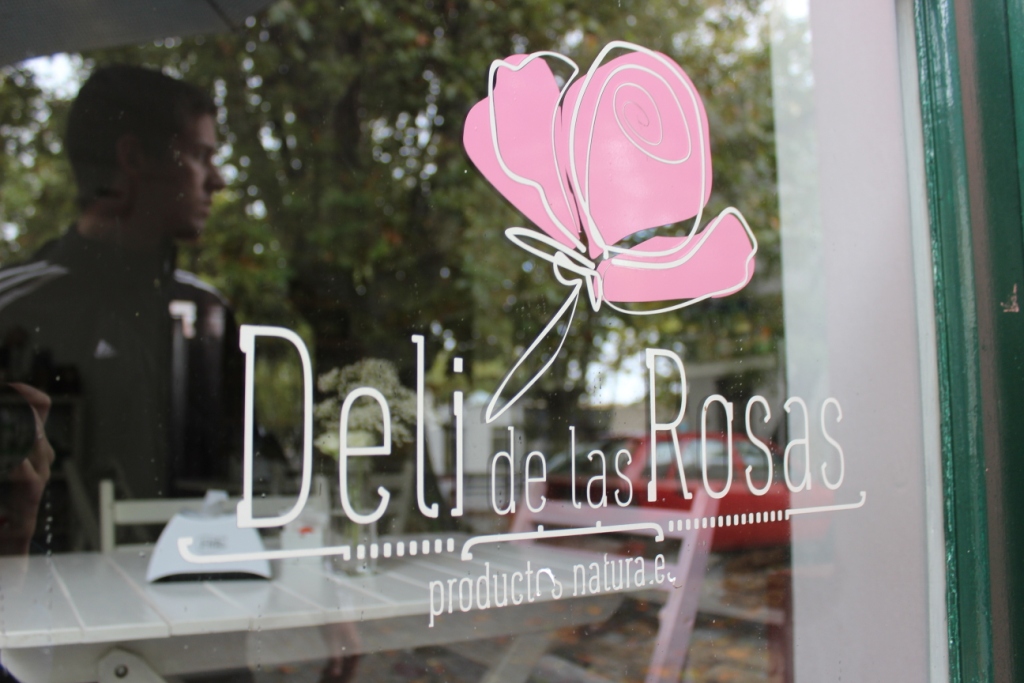 Love Ian's reflection in this picture of the window at Deli de las Rosas.

One last note on groceries: There are a few foods that have been glaringly absent for a US citizen in this part of the world, two of the most tragic in our spoiled eyes being tortilla chips (no, Doritos don’t count and no, guac is not just as good on crackers) and peanut butter. Once, in a grocery store in Argentina I was asking a young man who worked there about peanut butter. He was trying so hard to understand, and we had a great laugh together about it, but he just couldn’t even wrap his head around the concept. He thought maybe it was similar to dulce de leche and found it mind boggling that we ate creamed peanuts with jelly. Here, in Colonia, one of the stores has a few shelves of goods for tourists. The small jar of off brand peanut butter in this section costs $14 USD.

After waiting a few days too long to get our laundry done, we finally took our jam-packed bag to a lavanderia on the next street over. Like groceries, this service is more expensive in Uruguay, costing us 300 pesos ($13.50 USD), or about twice what we have paid on average in other countries. That said, the ladies at the shop were very nice and our carefully and neatly folded clothing smelled fabulous when we picked it up. In fact, we were under the impression that the three baskets we’d filled were going to cost 390 pesos, but upon arriving to pay the bill, I was told that they had knocked off around $4 USD because our clothing was fine (as in raggedy and thin, not as delicate and special) and didn’t take as much space or energy. Sweet! 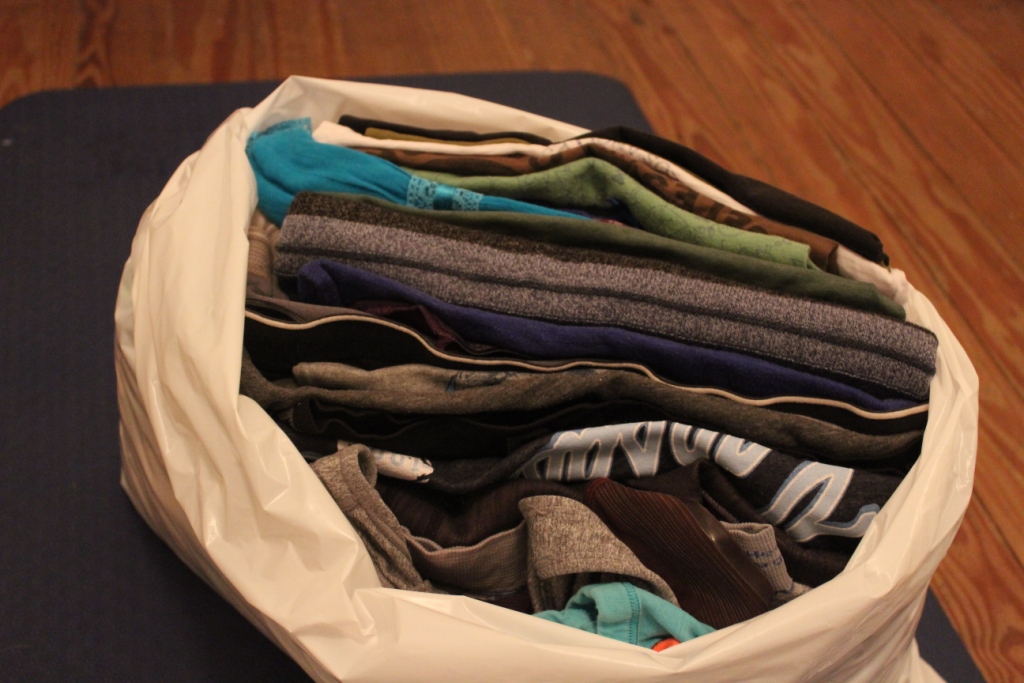 Running in Colonia has been quite enjoyable this month. While the cobblestones are none too forgiving, the sidewalks are rarely busy and within a few blocks, we find ourselves on asphalt before jumping on the well-manicured beach walkway that stretches a few miles along the coast for lovely views and unimpeded space with the exception of other walkers and joggers. Other days, Ian has gladly taken advantage of a public soccer field and playground full of pull up bars and other nifty equipment just a short walk from our place. I let my yoga mat take up residence in the second bedroom of our flat, and the space has been great for getting back to a regular practice.

We parked on the street this month despite having a private garage attached to our rental. All month, right in front of our place, with no problems. This is the norm where we’re from, but not so much in any of the places we’ve been since where cars will either be towed for taking up space on public streets or broken into for being easy targets (you know, like the night we had to hire a vigilante so that our vehicle wouldn’t be stolen). While that has certainly been a positive, gas prices are not. At approximately $6.50 USD per gallon, we’re just being thankful that Uruguay is such a small country and have been driving very little. In fact, the only times we’ve driven this month are when we visited a larger grocery store a few miles away and on afternoons that we’ve spent at the beaches north of town. Otherwise, we happily walk everywhere we need to, and we’re finding that the ability to do so is an attribute we really value in the places we live. For the pedal averse, there are many companies in Colonia that rent out golf carts and motorbikes to meet the transportation needs of the frequent vehicle-less visitors from Buenos Aires. We didn’t try it, so we don’t have any insight into the cost or rules, but it looked like fun! 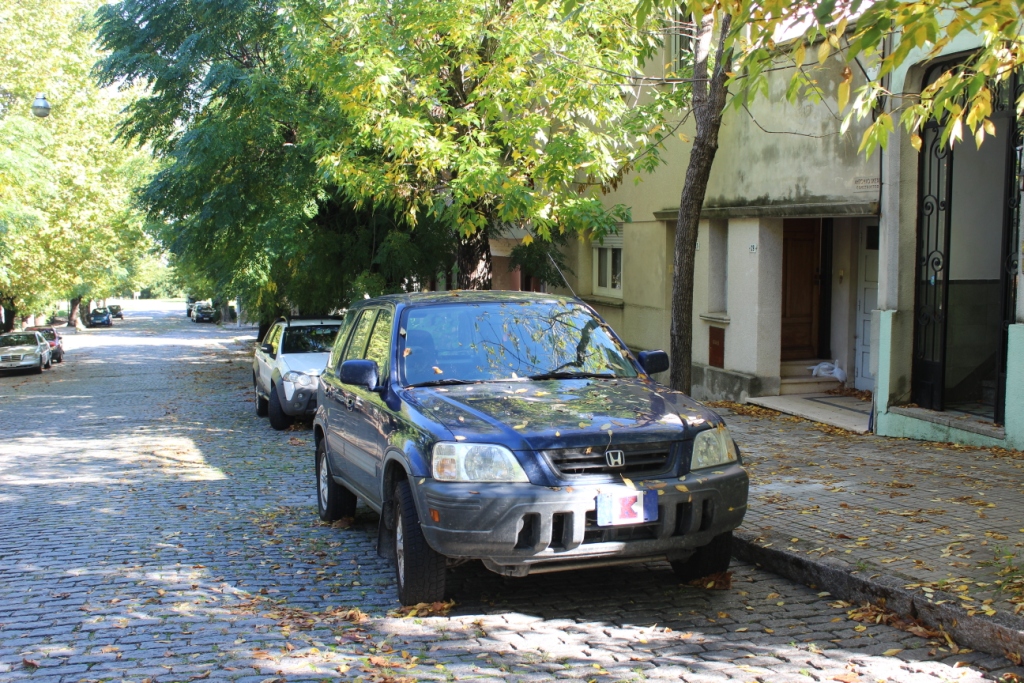 The CR-Van parked outside of our place on Washington Barbot Street in Colonia.