Our December with family, though filled to the brim with love and joy, has us a bit distracted from blog writing. So until we get ourselves caught up, here is a throwback from our days in North Carolina.  After living in Durham for 7 months, we moved about 45 minutes east for the next 3 and a half years, during which time we often enjoyed what we called “Durham Days” – spontaneous Saturdays spent galavanting about in search of resurfaced memories and new adventures.  Below are some of our favorites. 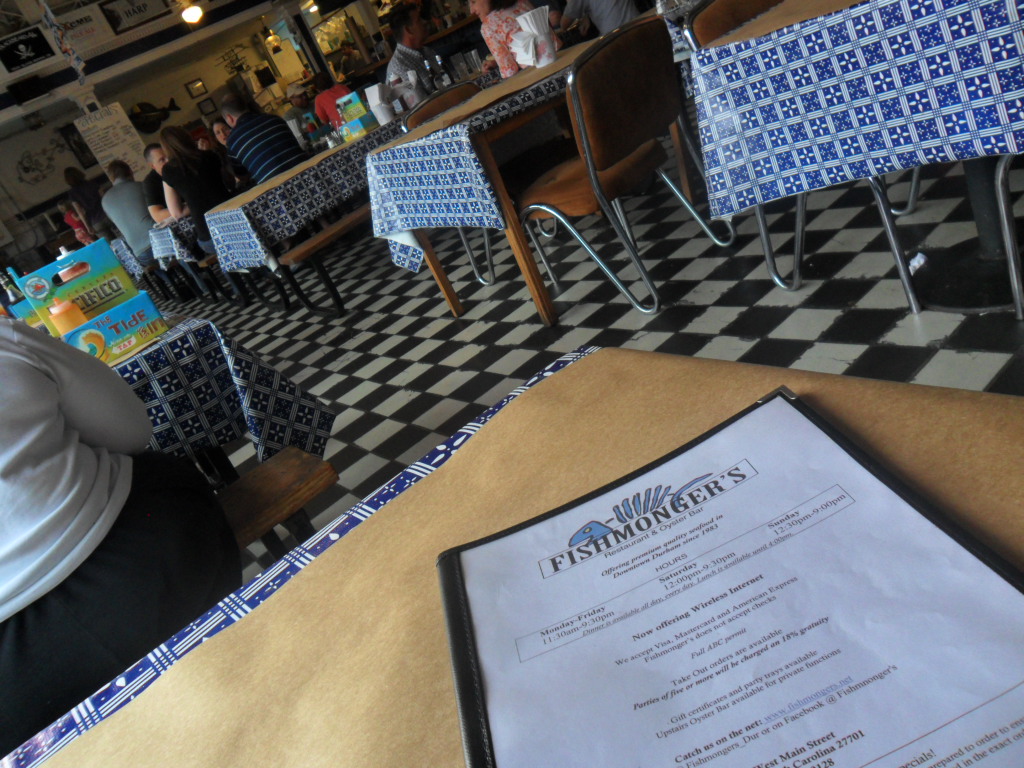 Durham’s Historic Brightleaf District lies between Duke’s main campus to the west and Downtown to the east. Like many of the city’s central areas, Brightleaf’s main square is built into old tobacco warehouses from the early 20th century providing instant atmosphere modestly ornamented by strands of small light bulbs that criss cross over outdoor cafe tables between the buildings.  Just outside of the square, one block east on Main Street, is Fishmonger’s – hands down our favorite seafood restaurant in the Triangle. The interior of the restaurant is entirely unassuming, almost as though the fishermen themselves had just come off their boats, lugging in the day’s catch and staying for a beer. The tables are covered in brown paper, and the large front windows provide a contrasting natural light. The food is incredible. Fishmonger’s probably said it best themselves when they shared on the Brightleaf website, “We have a philosophy that is both simple and sublime — we don’t do it fancy, we just do it right.”

One of our favorite ways to get to know a city is through their local beer. The Triangle has a lot of local beer and a fair number of brewery tours to help us in making our selections. From airplanes at the Aviator tour located directly on the airstrip to darts and shuffleboard at Big Boss‘ upstairs bar, we’ve had a fabulous time getting to know the flavors. Perhaps the most accessible of these though, is the weekly Saturday tour at the Triangle Brewing Company. Though finding the door requires a visitor to park on a seemingly abandoned street, enter a fenced in gravel lot, and meander to the back of an industrial building, the tour itself is completely free, the samples are limitless (and by sample we mean 12 ounce pour), and the ping pong table is shared generously. It’s fair to warn you that the bathroom is one large room, shared by men and women, and typically with the door left open, but this is just part of letting go and enjoying an effortless Saturday at Triangle Brewing Company. The people are friendly, the beers are flowing, and if you catch the tour at the right time of year, the Habañero Ale is completely mind-blowing (yup… just rhymed on accident).

Made famous by the performances of Kevin Costner and Susan Sarandon in the celebrated 1988 film, Bull Durham, the Durham Bulls are a now Triple-A affiliate of the Tampa Bay Rays. Though their $16 million stadium opened in 1995, the roots of their humble beginnings in 1902 as the Durham Tobacconists lie just across the street in the American Tobacco District. Again, like much of the area, the old warehouse buildings and restored tobacco signage create an immediately engulfing environment. Now home to the Durham Bulls, the Durham Performing Arts Center, restaurants, bars, event spaces, and studios, this district just south of Downtown embodies past and present, arts and athletics, industry and entertainment. Our ideal day trip begins with a meal at Mellow Mushroom, a regional pizza joint with robust ingredients, fresh pies, groovy decor, and rich, complementary brews (not free beers, just beers that go well with pizza). A 30 second walk and $10 buys a seat directly behind home plate at the brick ballpark where stars like José Guillén, Aubrey Huff, Chipper Jones, Evan Longoria, and B.J. Upton once proved themselves MLB worthy, and a trip to Tyler’s Taproom caps off the night with a cold draft and a post game snack. All that said, we’re pretty sure we’ve only touched on a third of what the Tobacco District has to offer a visitor. 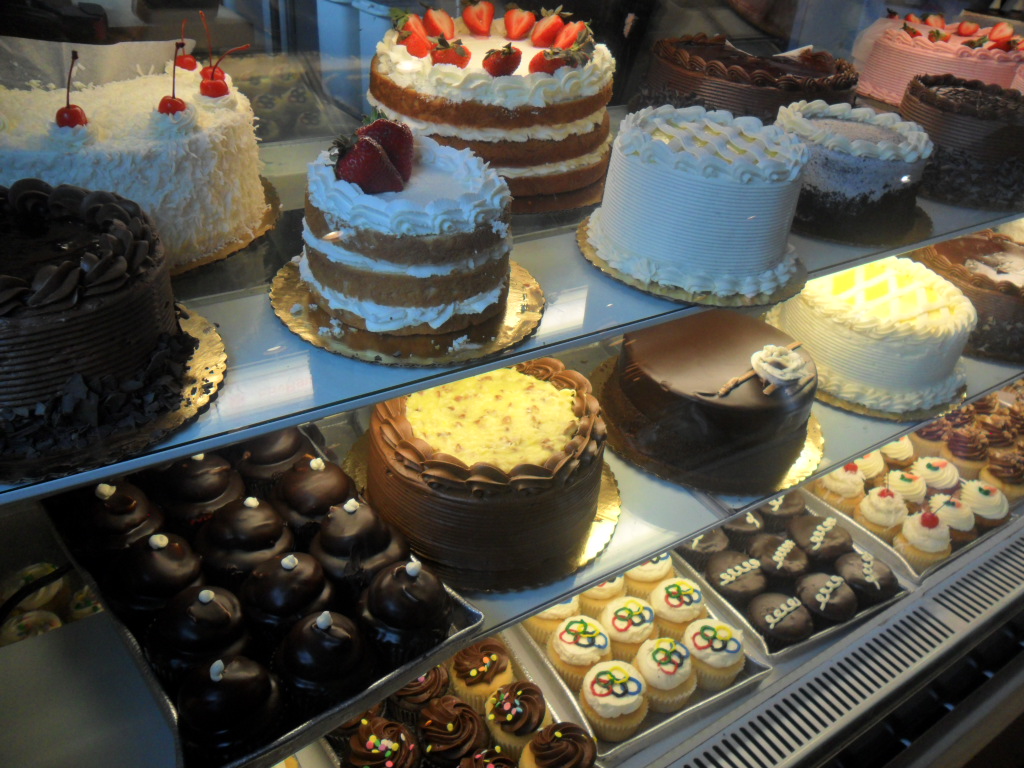 During Ian’s short stint as a PhD student at Duke, we stumbled upon Mad Hatter, a sweetery and coffee shop just off campus. We haven’t tried a crazy number of their treats as we’re typically swinging through in need of caffeine and a web connection, but the couple of times we’ve indulged, we’ve wondered why we don’t do it more often. Beyond the display cases brimming with beautiful creations are bakers at work and customer service that puts ease in ordering special coffee. Large windows overlook a couple of the area’s main thoroughfares, Main and Broad, and lining them are bar style seats, booths, tables, and many, many electrical outlets. In fact, my favorite thing about Mad Hatter is the plethora of those outlets and various surrounding seating options. So many cafes have a bad rap for being full of snooty intellectual wannabe types working on their screenplays and reeling off novel-length orders to their unaffected baristas. I must confess, until we were digital nomads, I often chuckled at the sight. Mad Hatter doesn’t say “seething creative hipster” though, it says, “Oh, you need the internet and your electronic device needs to be plugged in? Well, we’ve got a spot for you.” Well done Mad Hatter. Way to make using the internet while drinking coffee cool again. Also, your beverages are outstanding. 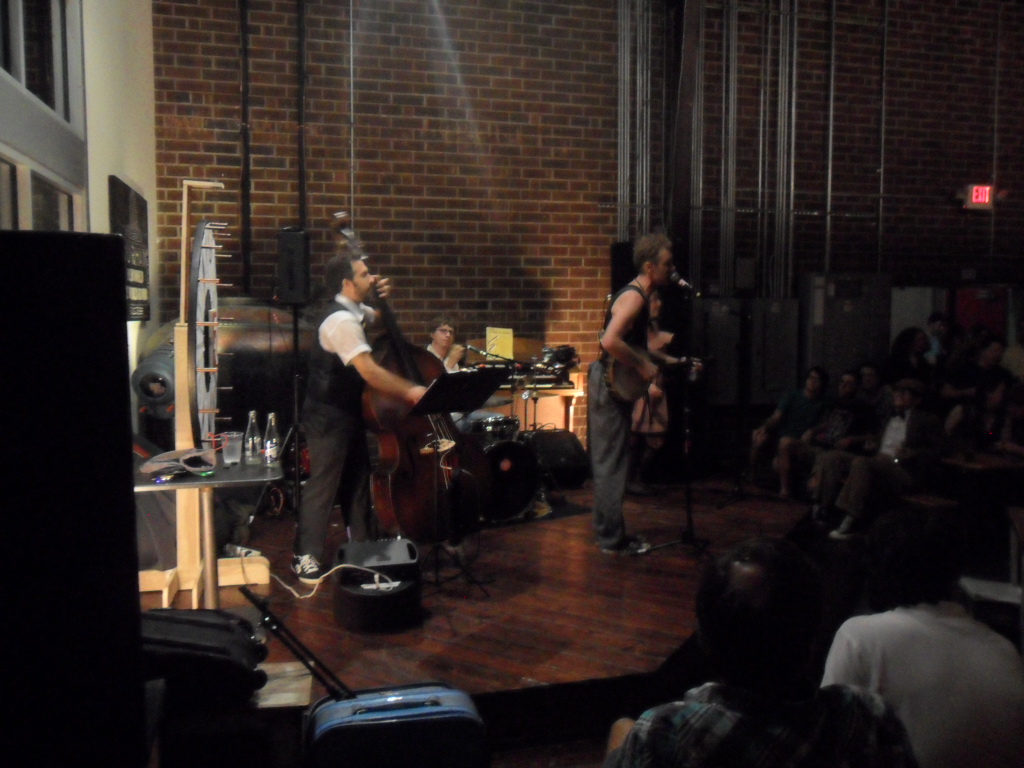 Fullsteam Brewery is eccentric by its own admission, highly focused on creating a beer that is “distinctly Southern” but drawing us in with their atmosphere and vibe. The bar is cozy and cool, the staff is friendly and helpful, and the beers are fulfilling and delicious. Ian typically starts with the Working Man’s Lunch,  and I appreciate that I can get a half pint for half the price of a pint (no sticking it to me for getting a little beer) which allows for more sampling. Though Fullsteam Brewery didn’t exist when we lived in Durham, a Midtown Dickens performance there in 2011 put it on our map, and we were lucky to happen back through on their second birthday party in early August of 2012. It was a rather dreary and rainy day, but the place was packed with a variety of odd types, some wearing hats and costumes, some with their families, all lovely folks. Food trucks surrounded the front entrance and bar games the back. A gentleman resembling a hillbilly version of Seinfeld’s Kramer leapt from his spot at center stage to parade through the crowd, strumming his banjo as he bounced, even successfully executing a break dance style floor spin without missing a beat. We played a nail biting couple of games of darts, all the while watching the happy crowd relaxed and enjoying themselves. It seems this comfortable jolliness is pretty typical on a Saturday at Fullsteam. 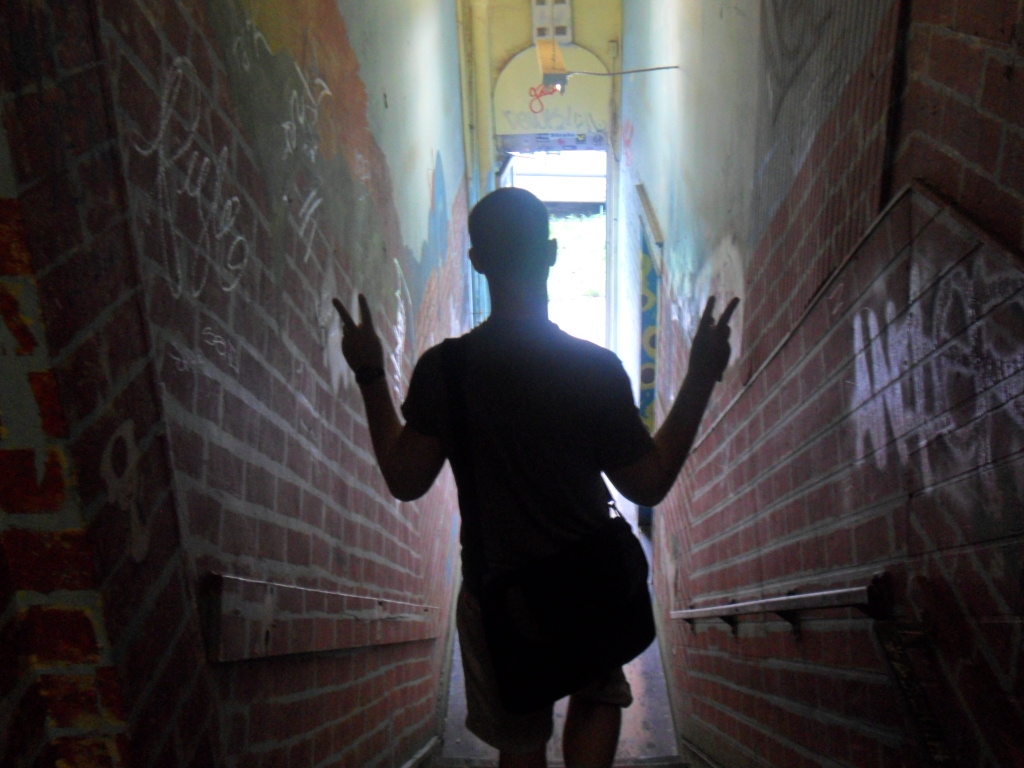 Steve told us repeatedly before we even visited North Carolina for the first time that we absolutely had to try a burrito at Cosmic Cantina. With locations on Chapel Hill’s Franklin Street and Durham’s 9th Street, it is a college student favorite, and we tend to think they’re onto something. Entering through a street level door surrounded by tagged electrical boxes and plain white brick, a hungry visitor must climb a brightly painted, Oz-esque stairway to reach the small, second floor restaurant. This, along with the mismatched decor and simple ordering process, makes it feel like you’ve discovered something – a secret burrito jackpot with authentic flavors and great prices. What more can you ask for? If you have any trouble finding the place, just look for the giant sign on the front of the building that reads, “The Best Mexican Food on the Planet”. 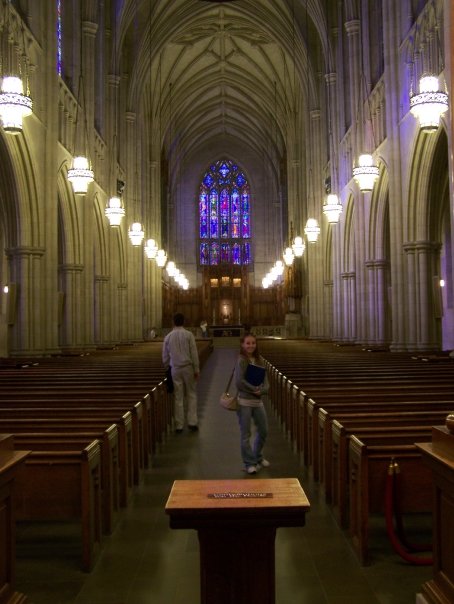 Duke Chapel, designed by Julian Abele in 1925 and constructed in the early 30s, is an absolute must see landmark of the Triangle. The Chapel is located at Duke University’s West Campus towering above an already beautiful region of the city as a breathtaking masterpiece that leaves anyone standing at its base in pure awe. Inside, three separate pipe organs containing a combined 12,893 pipes, play chords that beyond being heard can be felt vibrating in your core. Walking directly under the second largest of these and into the nave, the ceiling suddenly rises 73 feet above displaying some of the 77 stained-glass windows, which, as though the grandness of the architecture surrounding them were somehow lacking in ornamentation, were constructed using over a million pieces of colored glass. The Chapel’s mission, among other things, seeks to “[build] accountable communities that embody and practice the virtues of faith, hope, and love”, and their public stances on local issues certainly exemplify those values.