Cuenca to Cusco Part 5 – The Sites

Our four day drive from Cuenca, Ecuador to Cusco, Peru was both long and eventful, so we’re going to break it up into pieces and give the rundown one segment at a time. Read Part 1 – A Ridiculous Border, Part 2 – The Vigilante, Part 3 – Stranded in the Desert, and Part 4 – Lima first if you want. This post covers the our third day of driving, from the far side of Lima to the town of Abancay. From the incredible to the outrageous – we couldn’t make this stuff up.

We were both ravenous as we pulled away from our hotel in Punta Negra. When we’d run out of gas the afternoon before we had only a piece of bread, an avocado, and a banana in the car which we later supplemented with a small package of crackers once we were un-stranded. It was an entirely inadequate amount of food, and we could certainly feel it the next morning. After hitting an ATM and picking up some breakfast, we were on our way.

A good few hours into the day we took a four minute detour to the oasis we had been hoping to sleep at the night before. Huacachina (pronounced: wha-cah-cheen-ah), a village just next door to the town of Ica, is a genuine oasis in the desert complete with plants and water smack dab in the middle of rolling sand dunes. It looked so welcoming in the photos we’d seen online, like a scene from a movie. When we pulled up though it looked dry and fabricated and the electrical towers kind of ruined the vibe. Perhaps we would have felt differently if we had rolled in at sunset the previous evening or spent any time there. But we didn’t, so instead here are three interesting things about Huacachina: 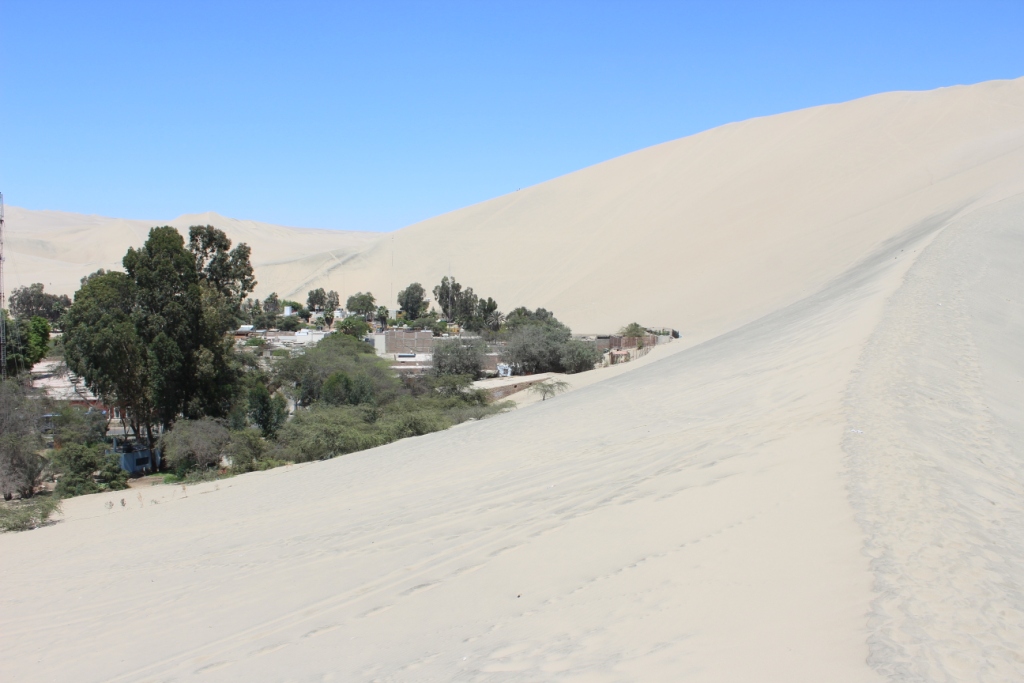 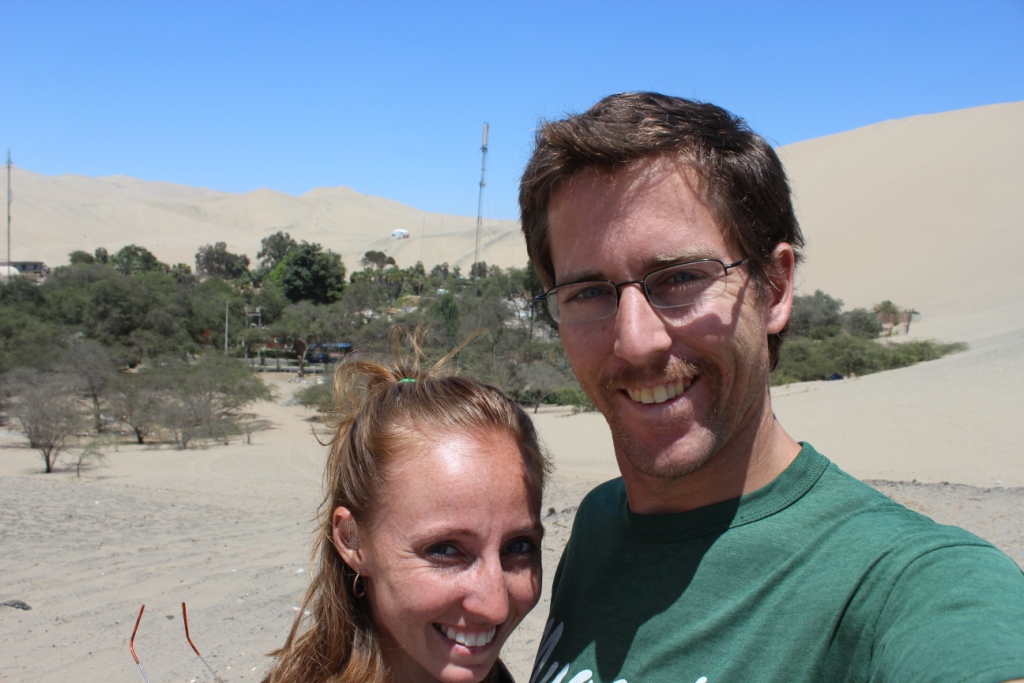 The sand dunes around Ica and Huacachina were really quite gorgeous themselves and blew everything else in the area out of the non-existent water. As we drove on down the road they grew larger and larger, barely making space for the highway to snake through the soft mountains of sand. Occasionally, we’d see a group with  four-wheelers out to enjoy the afternoon, but for the most part, the wind kept the dunes looking absolutely pristine, like untouched snow after a blizzard in the night. Soon our route turned east, further from the coast and the fine grains of sand. The ground became even dryer as the pretty desert became a tortured desert. We pulled up to a police checkpoint, and in the mental picture I imagine while recalling the dusty stop, I have painted a vulture into the lone tree next to the road, watching us creepily. It was here that we would experience our first dirty cop trying to get a bribe. We were driving without our lights on (yes, in the middle of the day, but Ian says he has read that this is actually a thing in this part of Peru), and the infraction, he said while pointing to the pad of tickets in his hand, would cost us S./300 ($108 USD). Something something about going to a bank, something something about needing to pay a fine. To be honest, I didn’t catch on to what he was doing at first, and by the time I did, I wasn’t in the mood to fork over any cash. I thanked him sincerely for teaching us this rule, apologized for not having followed it before, and assured him that we would be sure to keep our lights on from this point forward. And then I just sat there awkwardly and smiled. He let us go, probably not in the mood to teach some silly gringa how a bribe works on a Sunday afternoon. Fine with me.

The ground around us became intensely flat. If we had been in the desert the day before, then we were now in the far more hardcore desert, Chuck Norris’ desert. It might have seemed pretty unfriendly were it not for the Nazca Lines. Signs indicated that we were close, but we assumed that we wouldn’t be able to see them, being on the ground and all. I remember learning about the lines as early as 6th grade, and they had seemed to be a magical part of the world that I never dreamed I would ever see. Here I was though, just cruising by them on a weekend drive. I was giddy. Ian spotted a simple tower next to the road with a couple of tents in front covering tables of souvenirs and pulled over. “Metal Tower”, a sign said, “Maximum Capacity 10 People”. We paid S./2 per person ($.72 USD) and a woman showed us pictures in a book of what we would see from above. We climbed the rickety stairs and looked down on the mysterious images in silence. Ian took pictures. All I could do was stare. What a place. What a view. What a moment. Then we descended and drove away. Read about Nazca’s biggest question (why??) and other interesting area details on Sam and Zab’s blog in addition to these three interesting things about the magnificent lines: 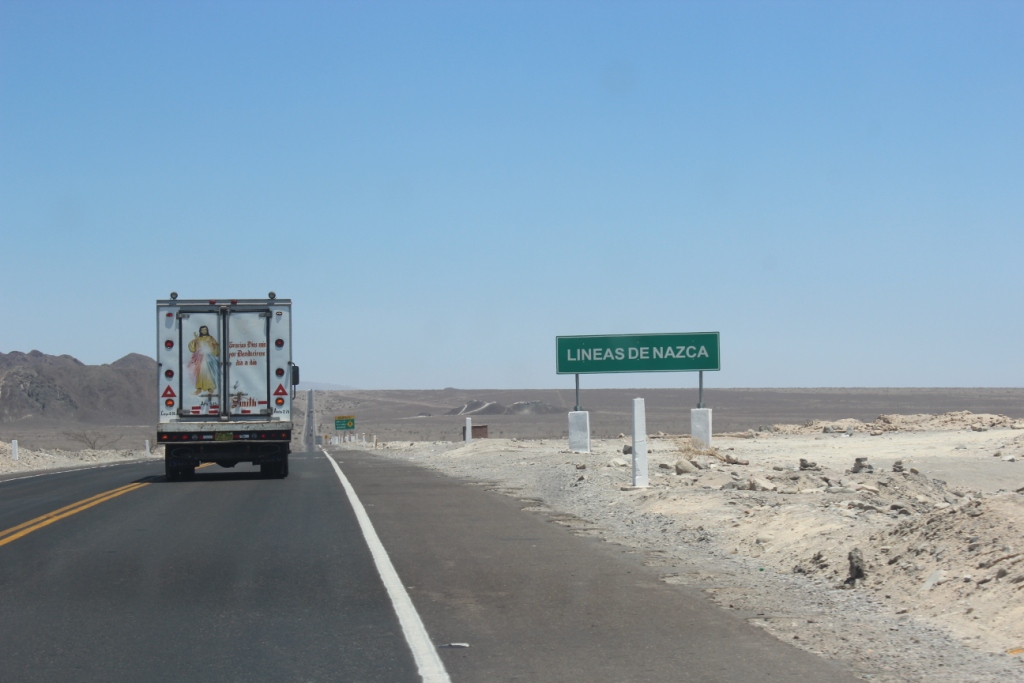 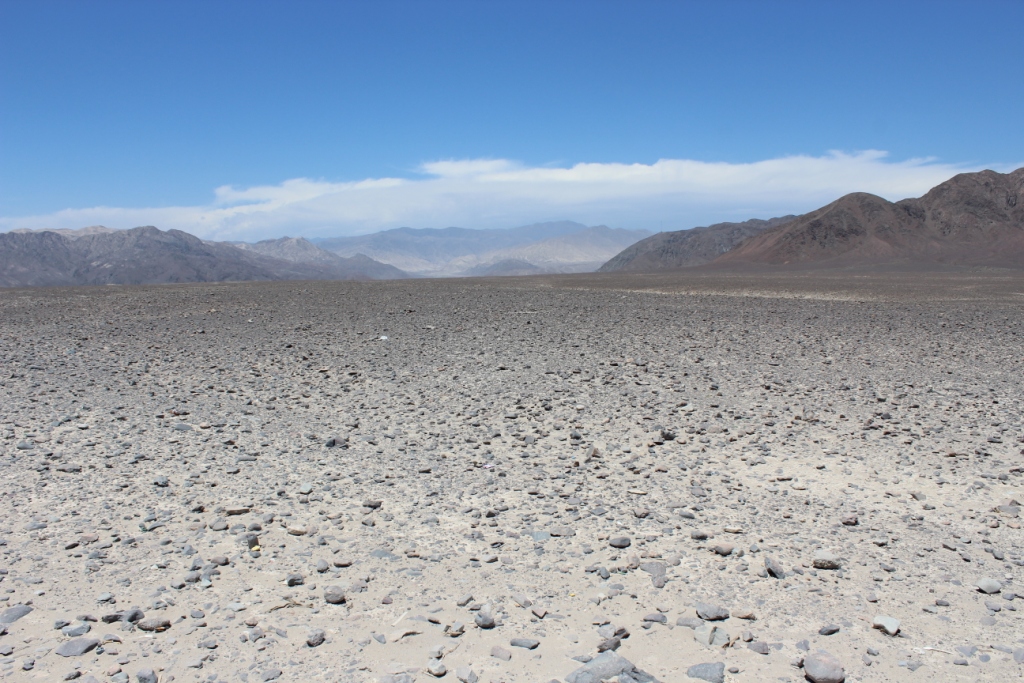 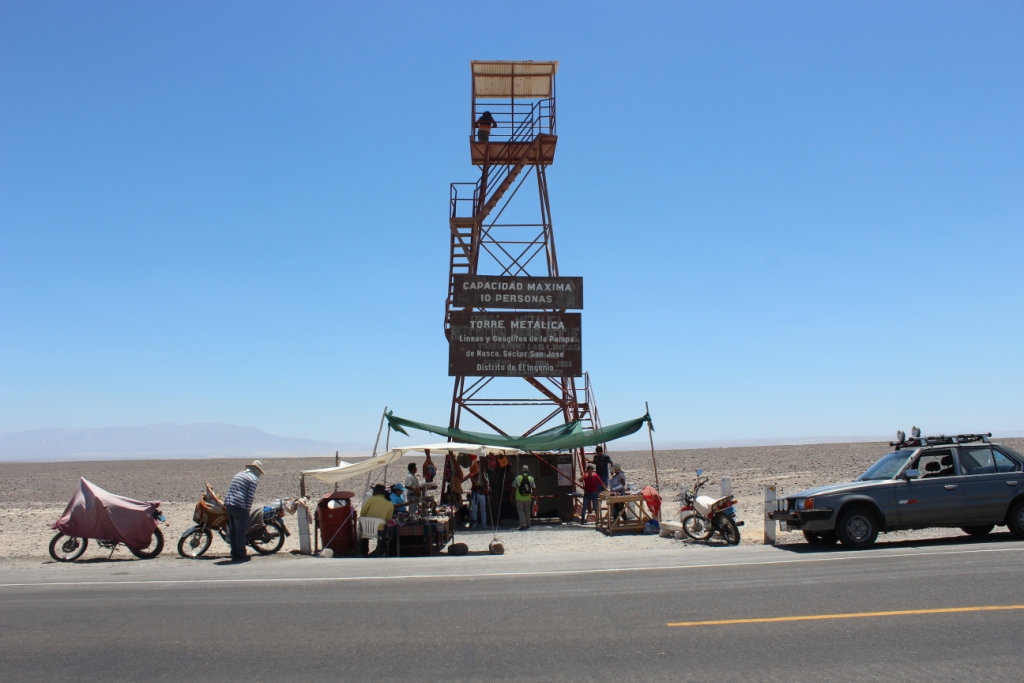 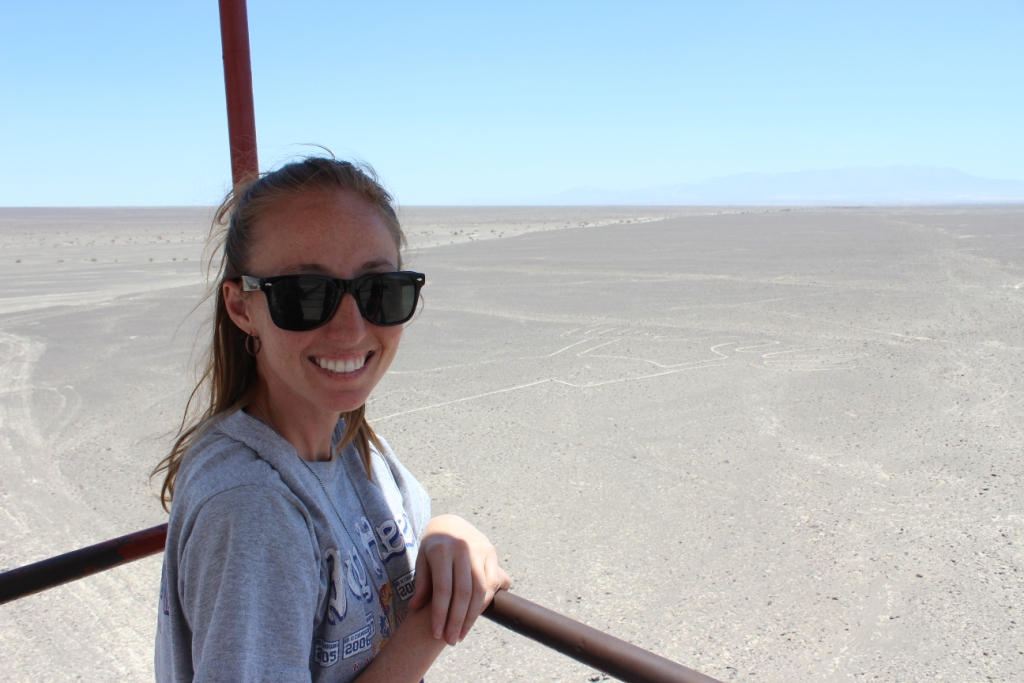 Brianna and the Hands 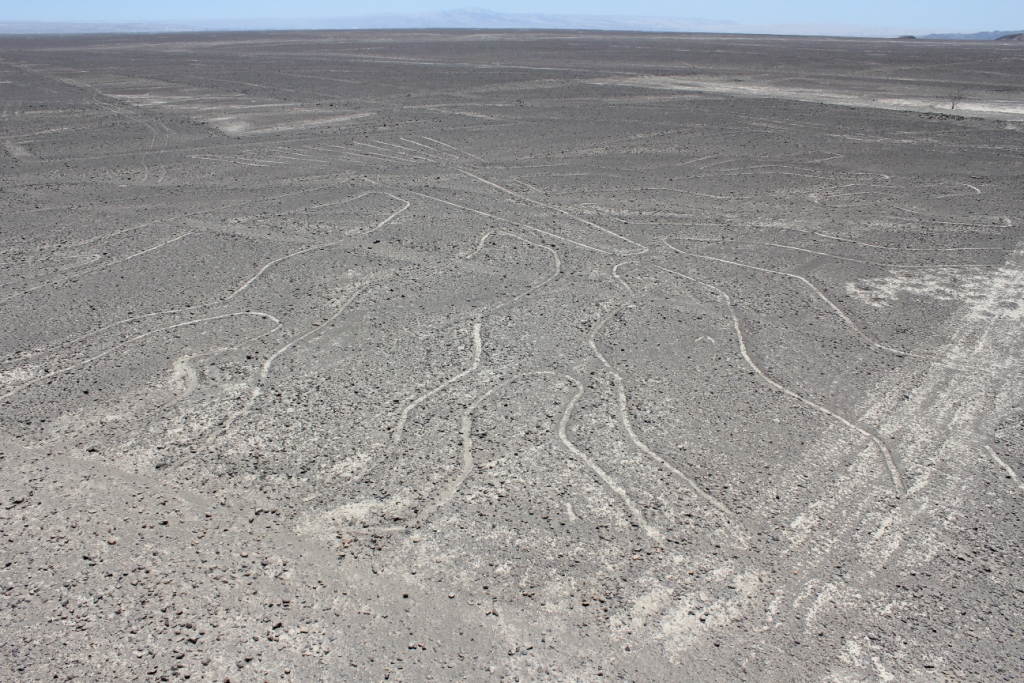 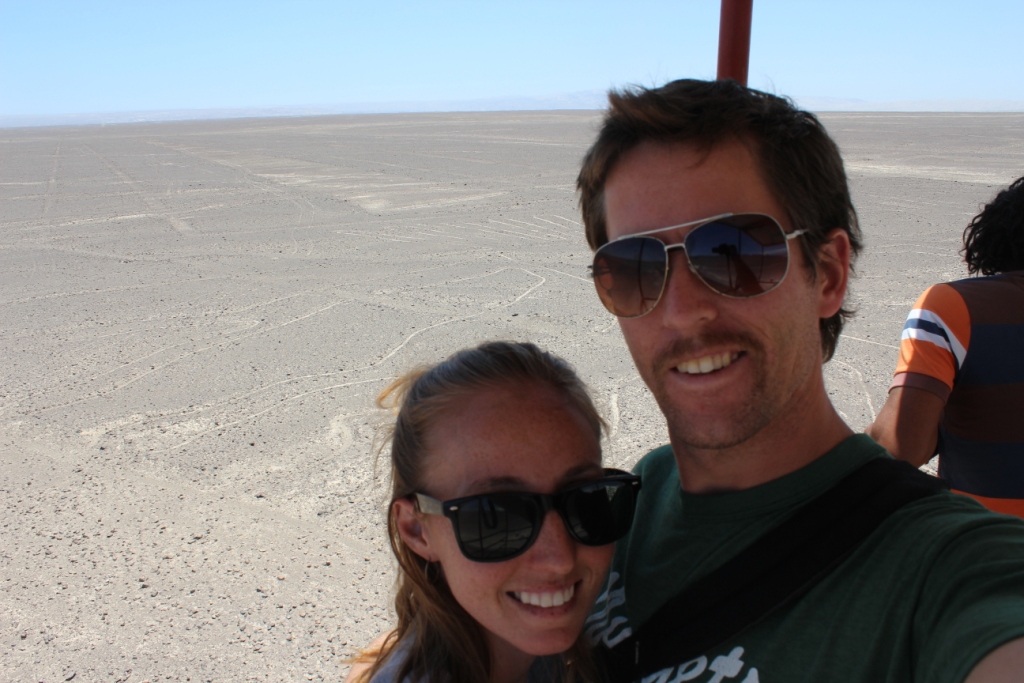 Brianna and Ian and the Nazca Tree 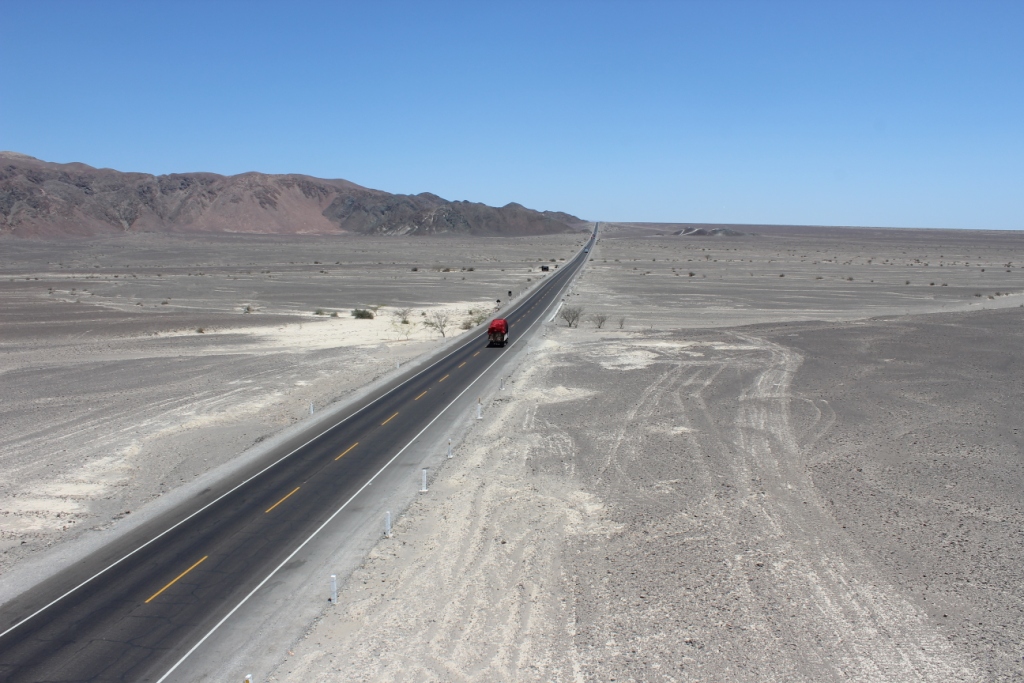 Highway through the Nazca Desert

The CR-Van did well as over the next couple of hours we climbed from sea-level to an astounding 14,500 feet. We don’t use our GPS for directions as we don’t have any of the appropriate maps downloaded, but we did pull it out that afternoon to watch our elevation continue up and up and up. It was shocking. And then, unexpectedly, we reached the top and were gifted with a long, straight, flat road that spilled out in front us onto a calm yellow plain filled with vicuñas, wild relatives of the alpaca. It was fantastically peaceful and slightly maddening, a place so quiet and calm but with air so thin that it was impossible to forget the shear spectacle of the closeness of the clouds. We had traveled from sea level sand dunes to tormented desert to giant Andean peaks to a sky high plain of tranquility. We were in the Reserva Nacional Pampa Galeras, and here are three of its interesting things: 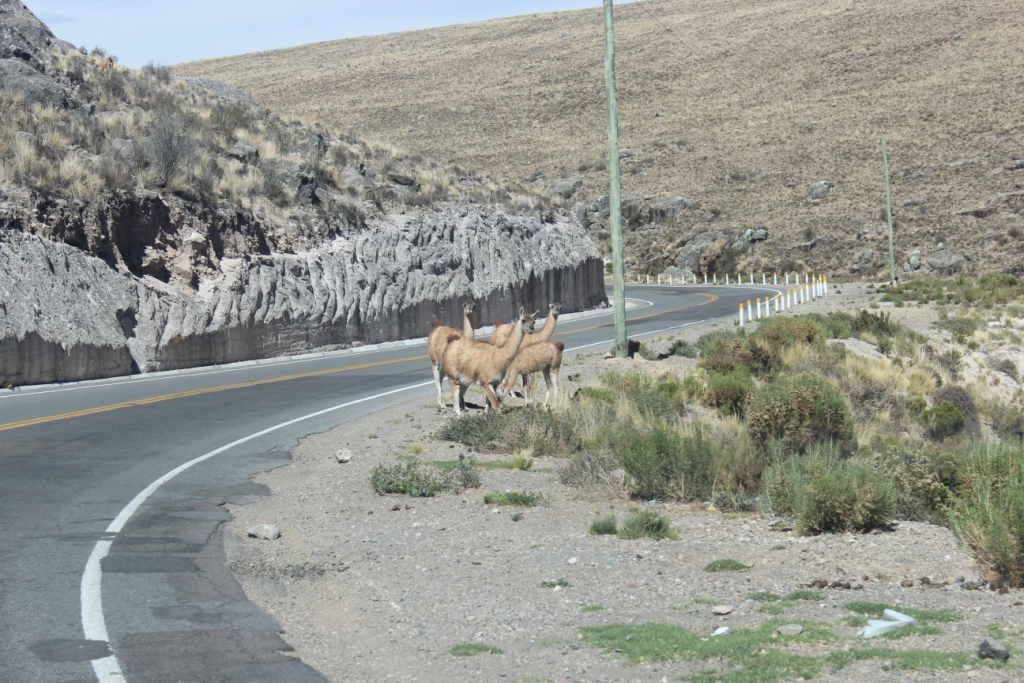 Vicuña by the Road 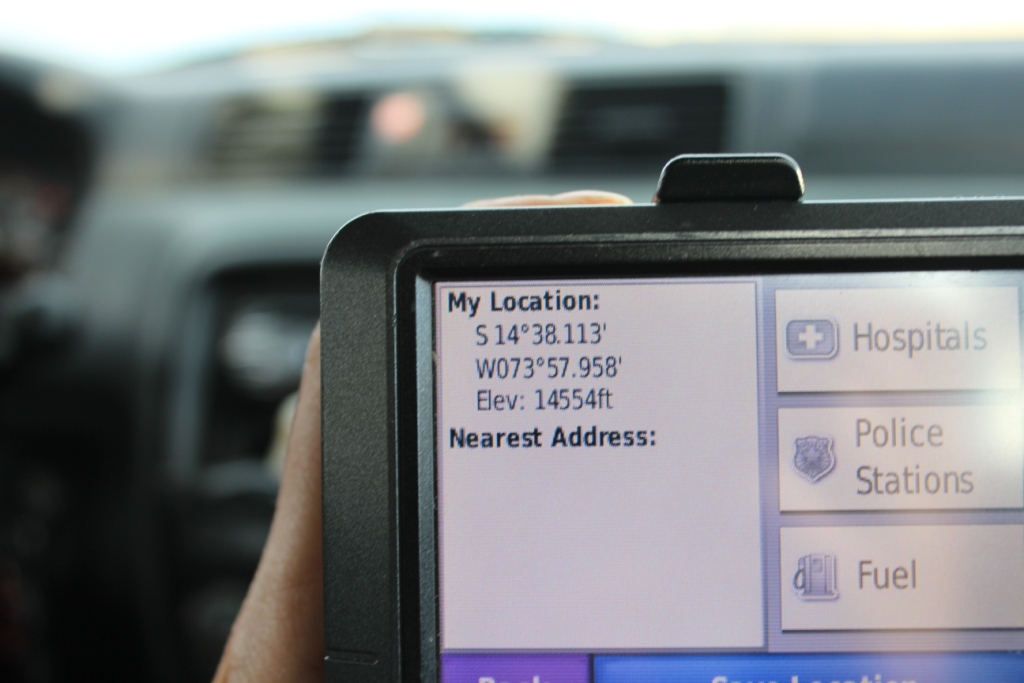 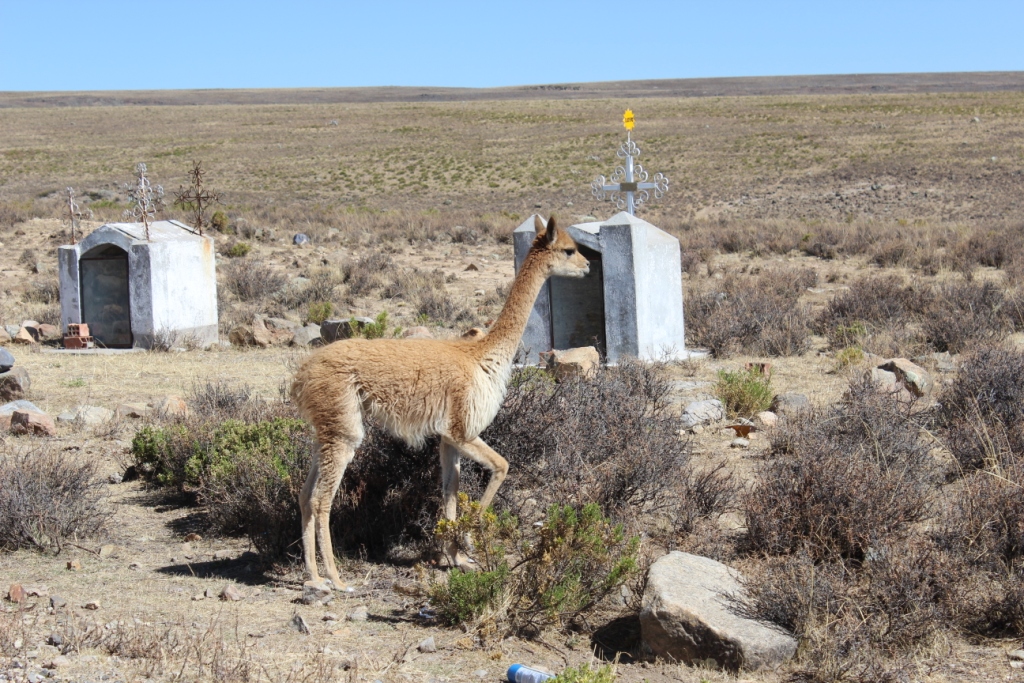 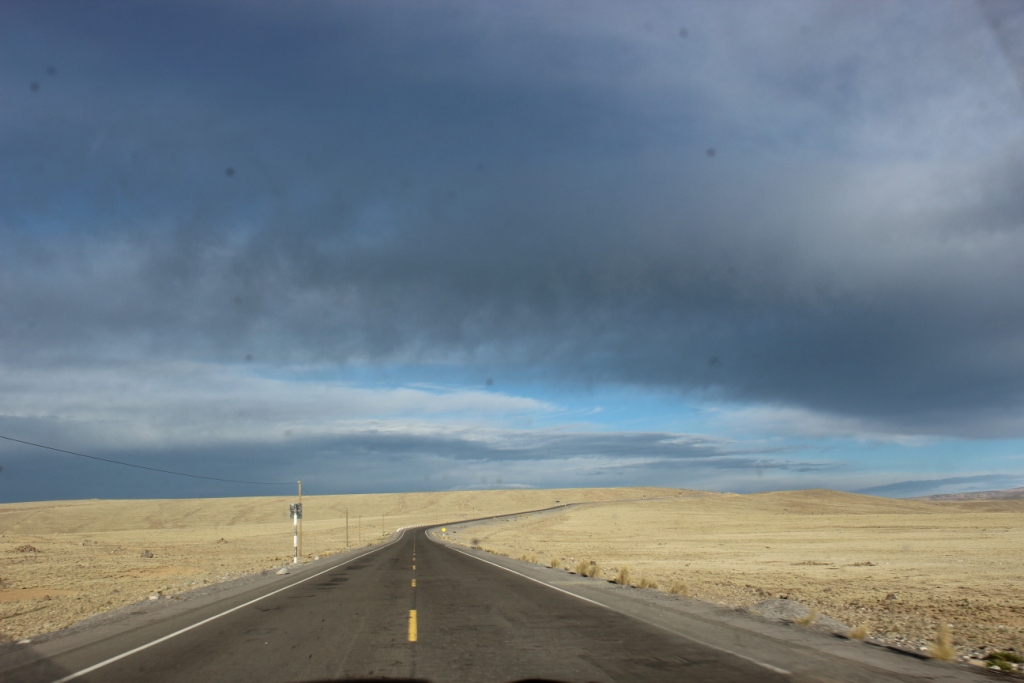 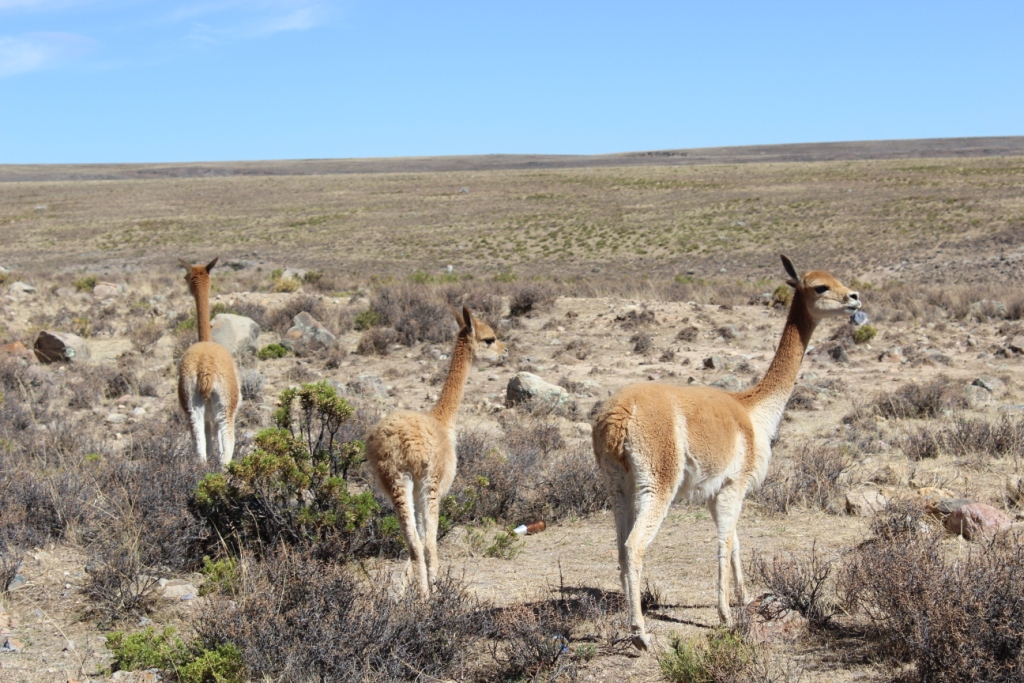 We pulled into Abancay, Peru after dark, happy to have made it so far and looking forward to the next day’s comparatively short drive into Cusco. A fancy hotel sat up on a hill on a fenced-in block in the middle of town like a mansion. Without hesitation we booked a room, grabbed Chinese carryout from across the street, turned my Cowboys game on the large television, and rested our tired heads. We had seen a lot that day and were nearing the end of another good weekend on the road.