Our four day drive from Cuenca, Ecuador to Cusco, Peru was both long and eventful, so we’re going to break it up into pieces and give the rundown one segment at a time. Read Part 1 – A Ridiculous Border, Part 2 – The Vigilante, and Part 3 – Stranded in the Desert first if you want. This post covers the last third of our second day of driving, from somewhere in the desert to the far side of Lima. From the incredible to the outrageous – we couldn’t make this stuff up.

After having secured enough gas to supposedly get us to the next station, we parted ways with our rescuers in the desert and continued south hoping to get as many miles in as possible before we were truly in the dark. The sun was long gone, and that time of evening had come when the day was no longer ending, but rather, the night was beginning. This hour always reminds me of playing games outside at dusk as a child and then that very confusing moment as an adult when you suddenly realize that you couldn’t see a ball being hurled at your head at dusk anymore if you tried. Ian and I talk about that milestone often actually, but this evening was not one of those times. Instead we tried to make use of the boost of energy we’d received from the simple act of putting the car back in drive by watching intently for the next gas station and getting a grasp on where we might be able to stop for the night. We were clearly no longer going to make it to Ica as we’d previously hoped. It was completely dark by the time we reached the next town. There were lights to the west and Ian spotted a gas station sign just before an intersection on the highway that directed traffic that way. It was a shining beacon in the dark world of gaslessness. We filled up and continued on, having decided that the roads were fine enough to try for Lima, which was still a few hours away.

Let me digress momentarily to give Lima a little bit of credit. We’ve read mounds of interesting pieces on the capital city, have heard raving reviews from many fellow travelers, even considered staying there for a while prior to finalizing our plans in Cusco. Lima is known as the Gastronomic Capital of the Americas and it boasts a lovely coastline where visitors enjoy biking, surfing, and sunning just steps from the city. You should definitely read about the experiences had by the Sam and Zab at Indefinite Adventure, Warren and Betsy at Married with Luggage (correction: Warren and Betsy weren’t all that taken by the city either, just some of the food; see Warren’s note in comments), and Lacey and Luis at Lost World Expedition with the apparently quite wonderful city and base your travel fantasies on their colorful stories and photos. Because our experience was a little bit different.

We were tired and it was dark and the highway was busy and the surroundings were super sketchy. Lima is a very large city (population: 7.6 million, metro population: 8.5 million), and we drove through small settlements for miles before reaching a toll both that we thought signified a transition to the more metropolitan urban area. Instead, it was a gateway to slums and miles and miles and miles of pay by the hour hostales (as you’ll recall, we now had experience with how to identify these) one right after another. We weren’t surprised to see a police checkpoint on the far side of the toll booth. We were, however, surprised to see no fewer than 20 police officers standing side by side, every single one of them blowing whistles, and half of them waving glowing batons signaling us to move forward. We crept by slowly and confused, trying not to gawk at the human tunnel as we rolled through it. The last officer in line stopped us to ask a few routine questions while the rest of the uniforms kept blowing their whistles and flapping their highlighter sticks at no one like broken toys. The highway between the checkpoint and the core of the city was a lengthy stretch of places you stop under no circumstances. Maybe it’s because it was dark that we felt this way. Maybe it’s because we were tired and couldn’t find any real (read: not just for prostitutes) hotels. Or maybe it was because we were driving through the fucking ghetto on a Saturday night. And we’re usually fine with the ghetto! We’ve lived in the ghetto. But we had a sneaking suspicion that we weren’t going to be all that welcome in this ghetto.

Half an hour later we finally started to see whole blocks of buildings that we thought looked reasonable. We spotted a hotel or two, but they were on the other side of the road and clear turn-arounds were non-existent. Just keep driving. The reasonable areas didn’t last long. Eventually, the lights began to fade and we put our hope into the small beach towns that line the coast at the southern end of the city. It was 11:30PM by the time we stopped. We pulled off at Punta Negra where a security guard opened the gate that he was manning into town and pointed us ten blocks down a vacated, sandy road to a hotel. There were two and both appeared to be closed. A single man was standing under a streetlight on the otherwise abandoned block, smoking a cigarette and looking at us curiously. Is the hotel open? I asked. Yes, he replied. Who do I talk to? I asked. Me, he replied kindly, putting out his smoke. I asked if he had rooms and how much they cost. The cheapest one available was S./120 ($43.20 USD). I began counting the last of our coins into Ian’s hand. 119.1. It’s all we have, I said. I didn’t even have to try to turn on my sad eyes for it to be completely evident how ragged we were. The man accepted, introduced himself as Samuel, directed our CR-Van into the garage, and then showed us to our spacious, clean room. We told him that we were leaving at 5AM and asked if we would be able to get out of the garage at that time. He confirmed. We were asleep the second our heads hit the pillow.

A ringing phone woke us. We were disoriented, and I wondered what Maya had learned to do this time. It was Samuel calling to tell us that it was 6AM. When we stumbled to the car 10 minutes later, he apologized for waking us up, and we refused his apology, insisting that we were grateful to him for informing us that we had overslept. Without him, we said, we’d have been there until the next afternoon. He laughed with us, directed us towards an ATM to replenish our cash supply, and opened the garage door. When we’d open the door to our room that morning, we saw what we hadn’t been able to the night before. Our hotel was absolutely beach front. The ocean that we could hear roaring in the dark was now visible, nothing stood between us and the sand and the water. What a nice spot, we mused.

Catch the end of the series here: 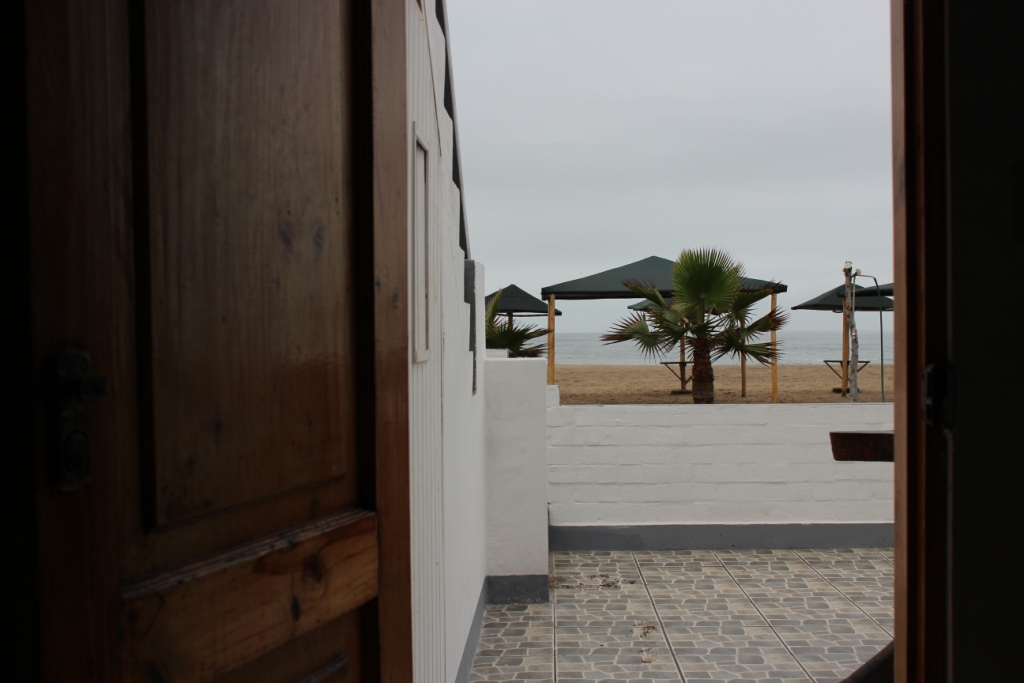