Cuenca to Cusco Part 3 – Stranded in the Desert

Our four day drive from Cuenca, Ecuador to Cusco, Peru was both long and eventful, so we’re going to break it up into pieces and give the rundown one segment at a time. Read Part 1 – A Ridiculous Border and Part 2 – The Vigilante first if you want. This post covers the first two thirds of our second day of driving, from Chiclayo, Peru to somewhere in the desert. From the incredible to the outrageous – we couldn’t make this stuff up. 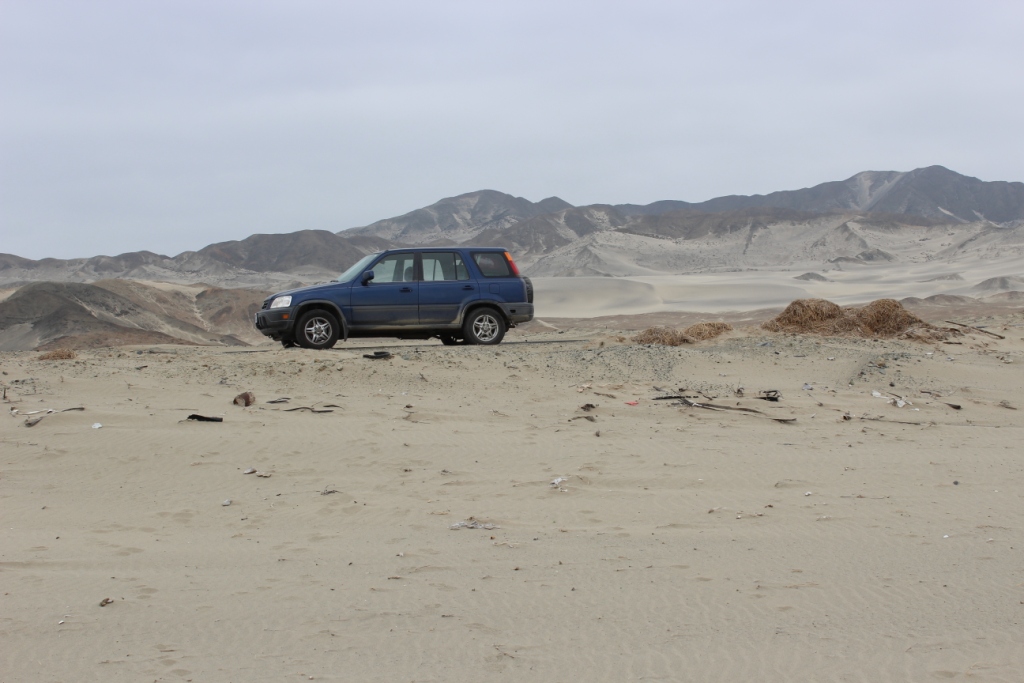 The further we got from Chiclayo the more sparse the landscape became. Not that there was much there from the start. Because of the dark, we hadn’t noticed how bare our surroundings were as we entered town the night before. It was mostly rock and sand, a somber, light tan mass of land that ran idly along the highway like melting ice cream and sadness with sections of dry trees parallel to the road and dark bushes winding boringly through small hills of sand. With every mile, the plant life became thinner until soon there was only sand for as far as the eye could see. The small hills had grown into medium hills and the medium hills into large hills. The patterns in their dark tops imitated the peaks of the Andes beyond like tiny mountains made of sand. It was stark and desolate and a new kind of beautiful. We’d never seen such a desert before. We stopped, let the dogs run for a bit, and took a few photos. As we continued south, the sand peaks to the east became more pronounced and the previously hidden Pacific came into view, bringing the majesty of it all to life. Where the sand met the sea, the line was fuzzy, but where the sea met the sky it was practically indiscernible as one soft blue faded into another. The wind sketched designs into the sepia ground, taking its palette from the sands, dark and light. We were in awe at the allure of it all, the exquisiteness, the pure brilliance of a coastal expanse so empty. It was stunning.

We rode along in silence for a time, just taking it all in. When the quiet finally broke, it was Ian, pulling me from a near sleep with a tiny concern. I haven’t seen a gas station for a long time, he said. How much do we have left? I asked. Not very much, he answered. I won’t give you false hope, friends, or drag this out into the painful game of maybe-there-will-be-a-station-around-the-next-bend that Ian and I played for many long miles. No, I’ll just give it to you straight. We ran out of gas in the desert. The middle of the freaking desert. And if that’s not an overlander’s fail, I don’t know what is. Aside from the whole barren desert thing though, we found a pretty good spot near a construction crew and an SOS phone to roll to a stop before the CR-Van chug-chug-chugged to its truly empty resting spot. We introduced ourselves to the lady on the road who was directing trucks between the highway and the modest construction base just off the road before traipsing 500 feet down the pavement to call for help. Fortunately for us, the segment of the Peruvian Pan-American that we happened to be on when our tank went dry offers a service similar to AAA along the highway, through which drivers can use the intermittently placed blue phones next to the road to receive emergency roadside assistance. We pushed the button, informed the woman on the other end of our situation and location, and when she responded that help was on the way, we headed back to our car.

We waited for almost five hours. At first, we were hopeful. We got our daily workouts in along the side of the road (yes, everyone driving by accurately assumed we were super weird) and watched for a tow truck or assistance vehicle to drive by. Over time our confidence began to fade. It’s only been 90 minutes, we said early on. But they continued to tick by. We sat in the car in utter silence, staring at the bend in the road. We (I) snuck off behind a hill of rock and sand to use the restroom in the least exposed spot of a wide open field of desert. We played the world’s three saddest games of Go Fish.  Had we known how things were going to play out, Ian would have just hitched a ride to the next town and back. By the time we realized that help was not coming soon though, the threat of night was near, and we decided it was best to stick together. As dusk brought pinks and oranges to the dimming sky and the construction workers began flagging down rides home, we started planning for a night stranded in a isolated desert that was quickly becoming quite cool. We can pull behind that pile of rocks to sleep, we said with assurance. We can cuddle with the dogs for warmth, we agreed with positivity. That part made everything sound not so bad at all. 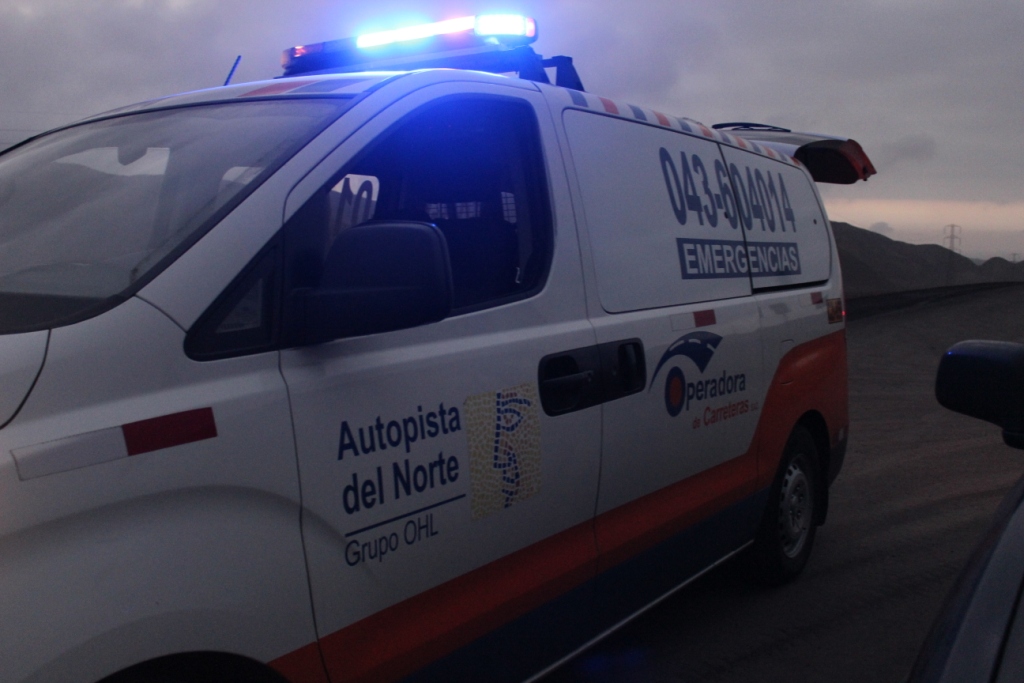 Just as the last of the construction workers climbed onto the bus towards town, a very professional and official looking emergency van pulled up to rescue the pitiful gringos. Hooray, we’re saved! The uniformed two-man team quickly decided that one of them would take one of us (Ian) to get gas while the other stayed with whoever didn’t go (me). They had a clipboard on which they made all kinds of formal documentation regarding who we were and what was wrong and where they helped us and the details of our vehicle. It all happened very quickly and then Ian was gone and the second rescuer and I were making small talk while I pretended not to be cold. They had taken so long to get to us because a man had fallen asleep at the wheel and rolled his car. The driver had a head injury and some broken bones, but was alive and going to be okay. No one else was involved. Wow, we are fortunate just to be out of gas. Yes, we did drive here from the United States. Peru is nice. It has a lot of different landscapes and is quite different from Kansas. This second resuer has two children, a 12-year-old boy and a 9-year-old girl. He and his wife had expected a bigger family, but after two Cesarean sections, it was too dangerous to his lady’s health to try for more. Why don’t we have kids yet? He noticed on the form that Ian is 28 already… on and on, you know, just your average not-too-personal type roadside conversation.

Ian and the first rescuer returned sooner than I’d expected, and the two men filled up our tank while Ian and I fished out some money for a tip. The construction woman had told us that it wasn’t necessary, but we felt like idiots and the men were extremely appreciative when we gave it. It wasn’t until after we hit the road again that I heard about Ian’s hilarious experience tracking down gasoline. It went something like this:

For the second time in 36 hours, the response to our being from the states included something about “Osama”. Ian didn’t catch much else except the words “terroristas” and “Casa Blanca”. Swell start. The van stopped at a destitute collection of buildings, and Ian and the first rescuer proceeded to speak to more than a half a dozen people in search of someone with gasoline for sale. Being pointed from one person to the next, they were finally directed to a shack with three drunk old men inside. They were clearly obliterated and despite Ian’s attempts at explaining that he spoke very little Spanish, one of the men continued to carry on a one-sided conversation with gusto. Another man went to the back for a while, and Ian began contemplating his escape route if things got out of hand. I thought I might have to run, he said. That part made me laugh. Actually, it all makes me laugh. When the second old man returned, he brought with him what he claimed to be gasoline, and said he would sell it to Ian for S./25 ($9 USD) per gallon. Ian smelled it and agreed to buy two gallons. We were going to make it out of the desert. 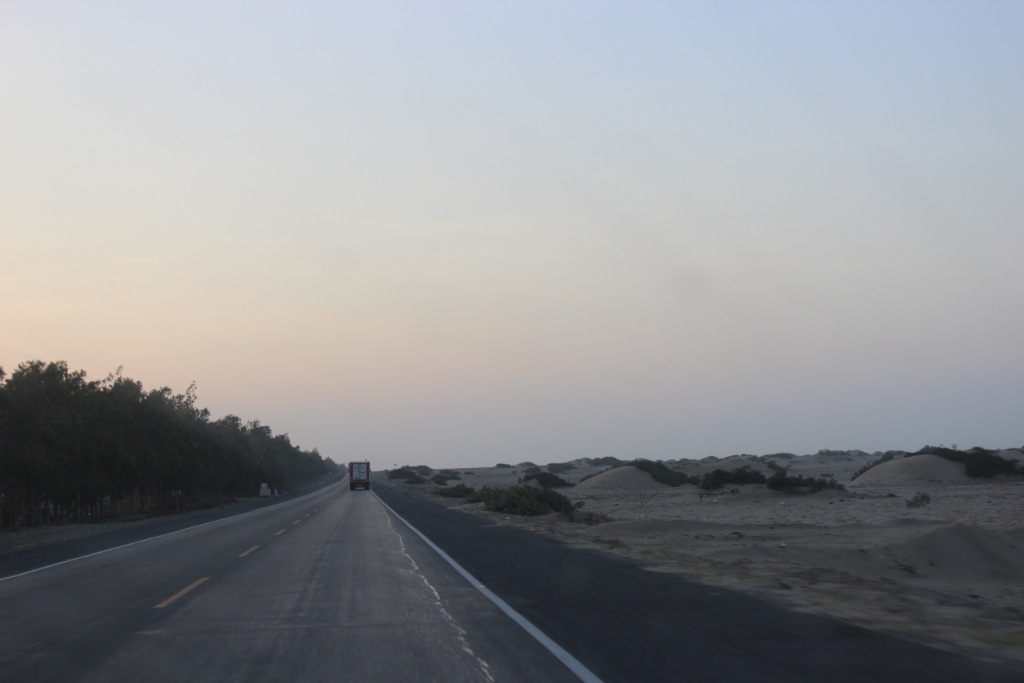 Early morning driving out of Chiclayo. 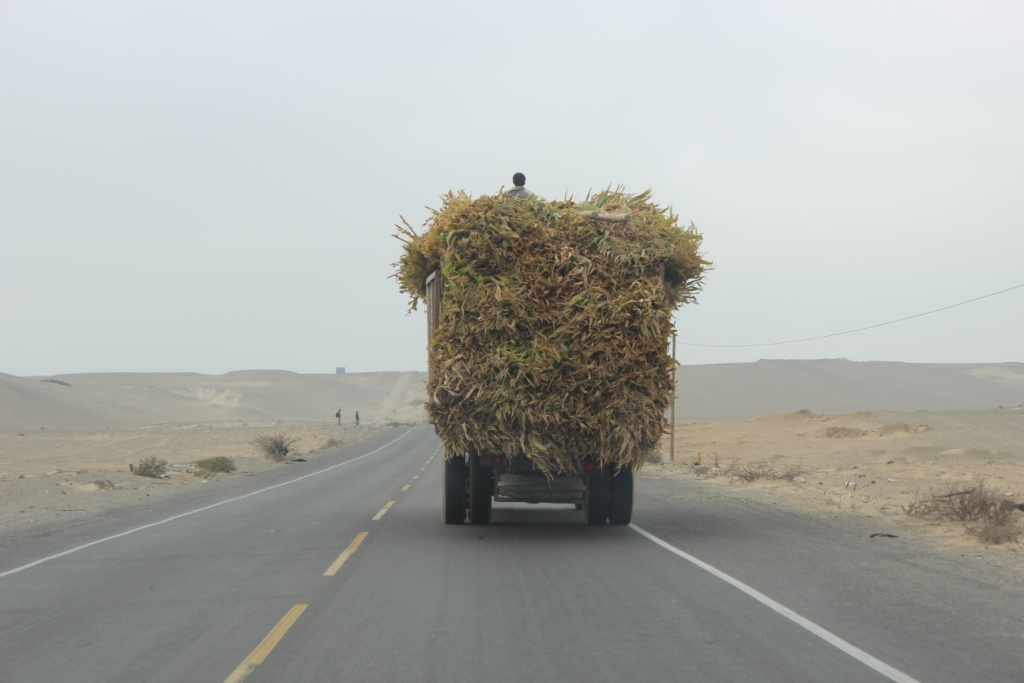 A man rides atop a full truck. 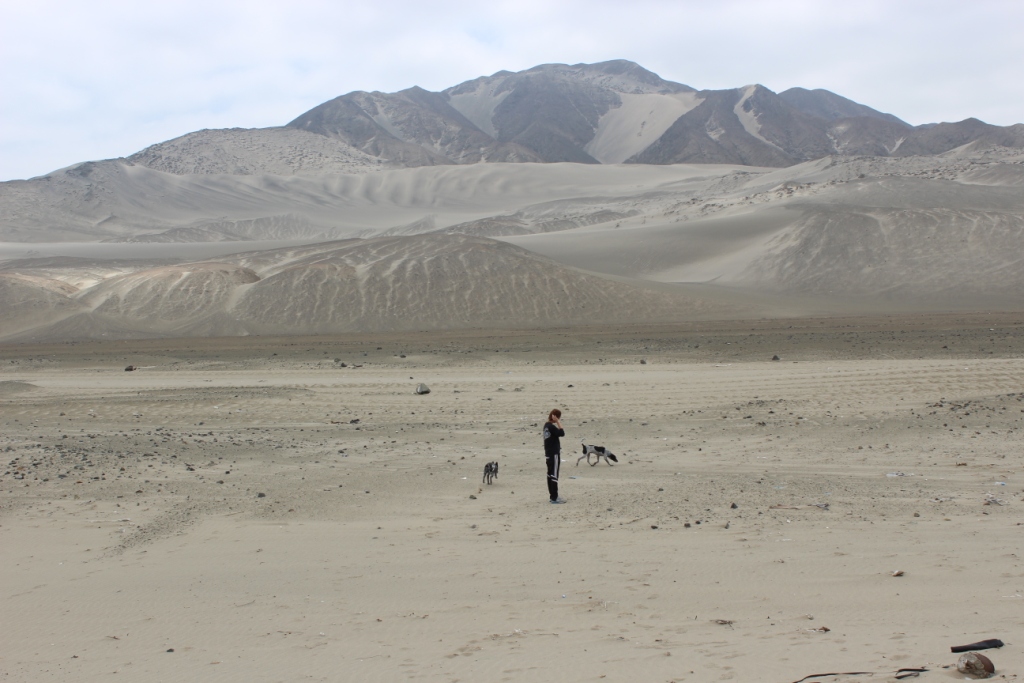 Taking a break to stretch our legs in the desert. 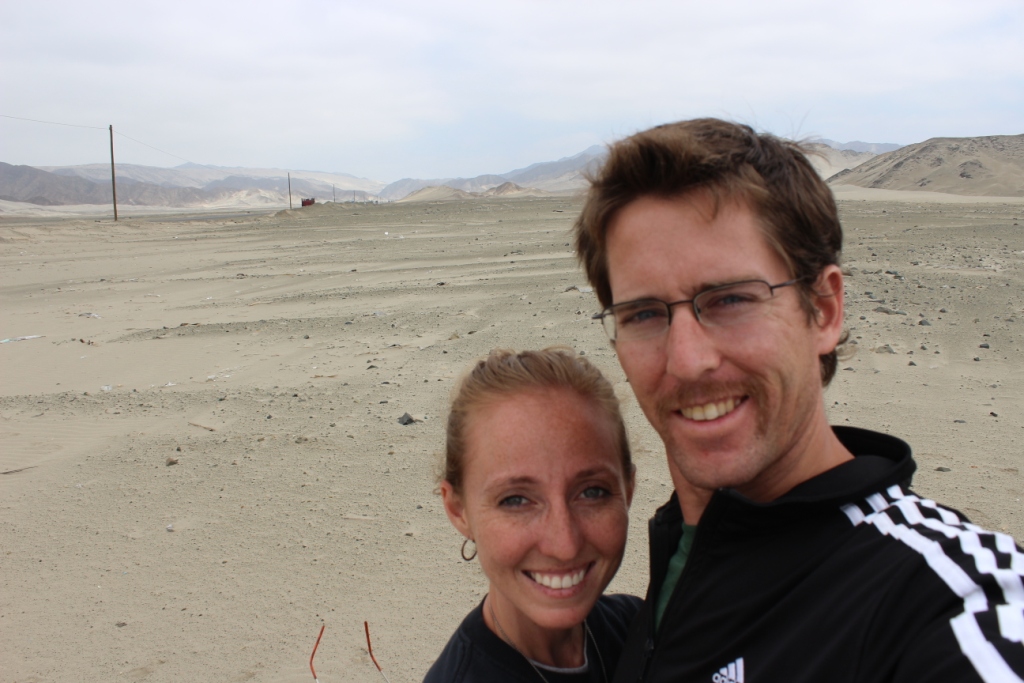 Morning selfie in the desert. 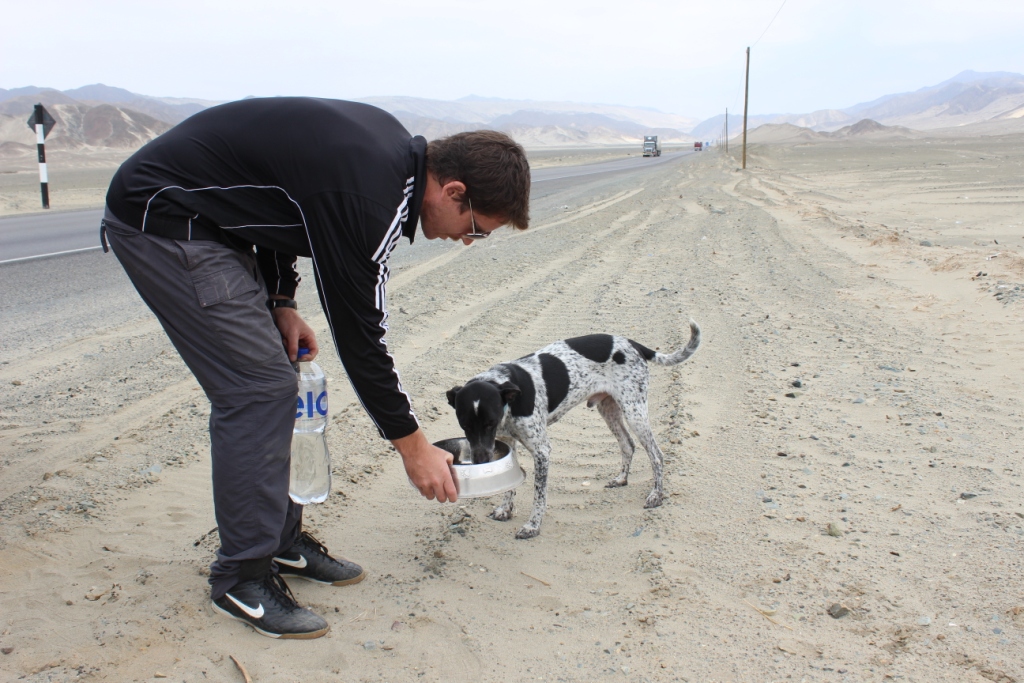 Ian gets Olmec a drink before we get back on the road. 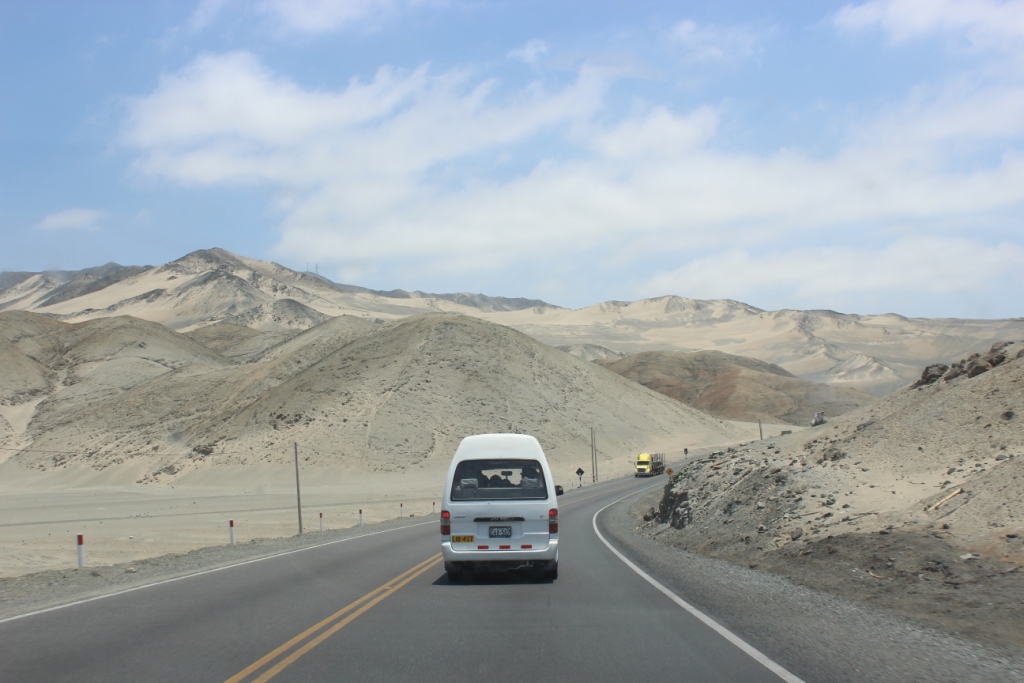 The sand mountains grow as we head further south. 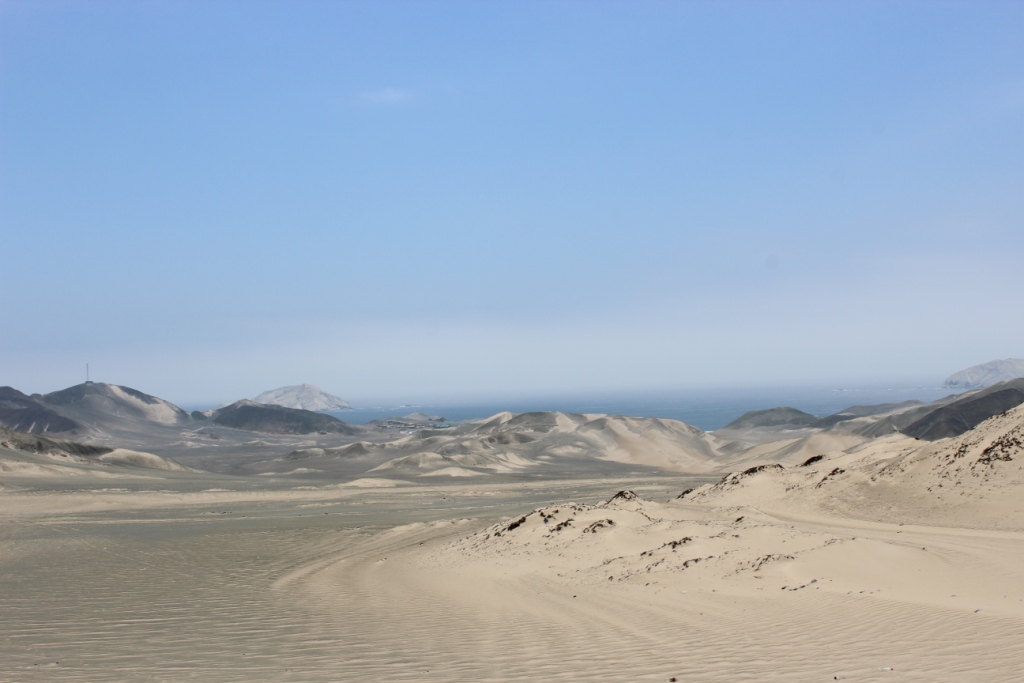 The ocean appears beyond the sand to the west. 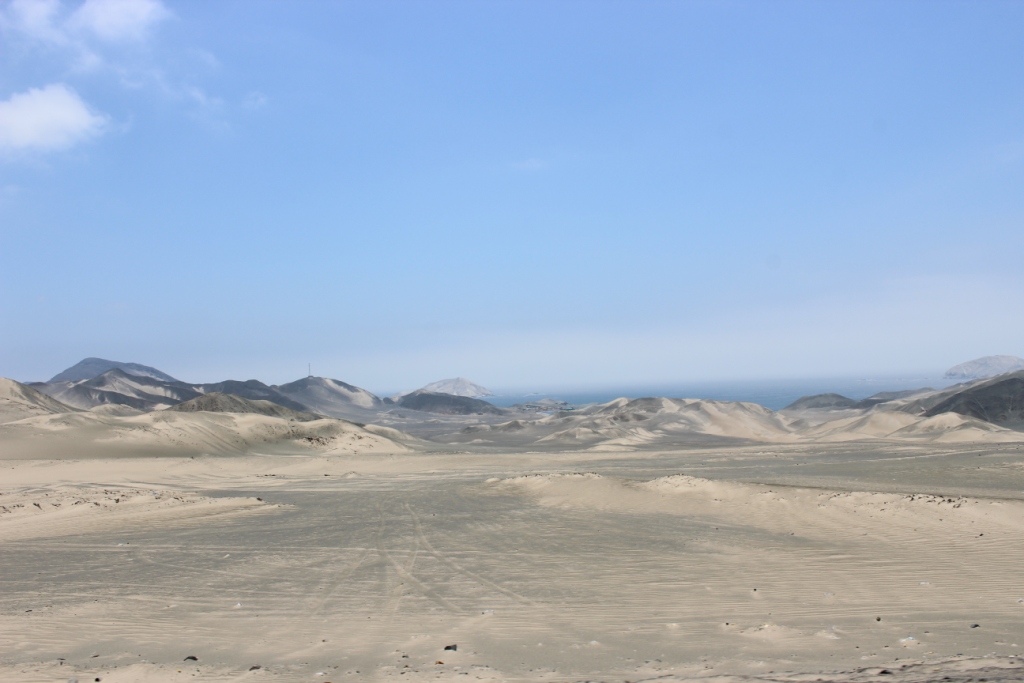 Where does the beach end and the desert begin? 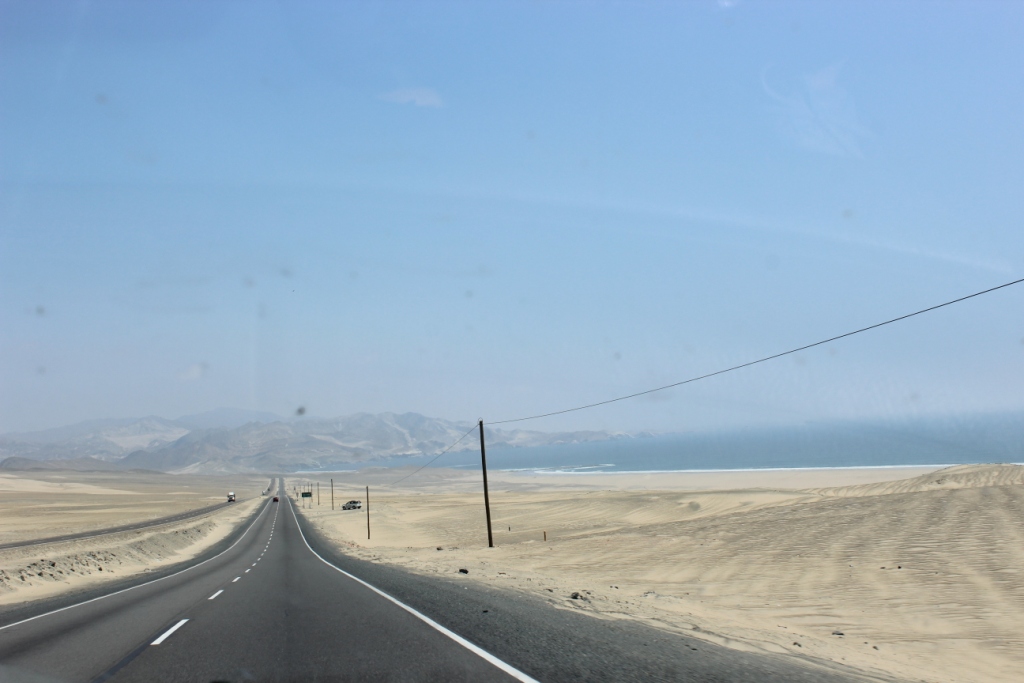 Driving parallel to the Pacific. 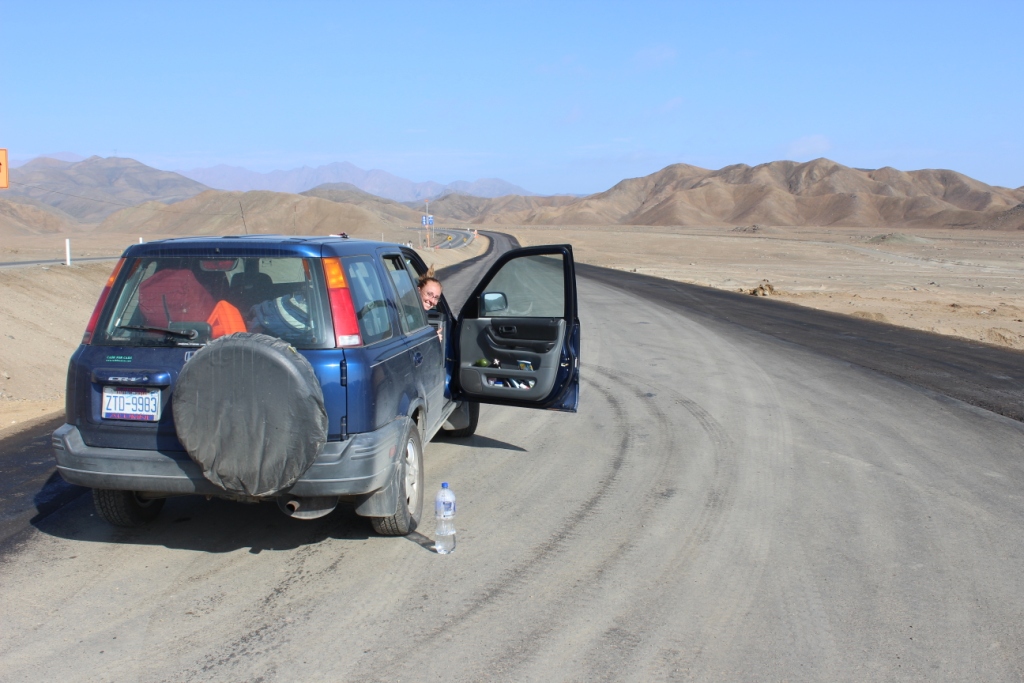 Boom. Stranded. That's good for a thumbs up. 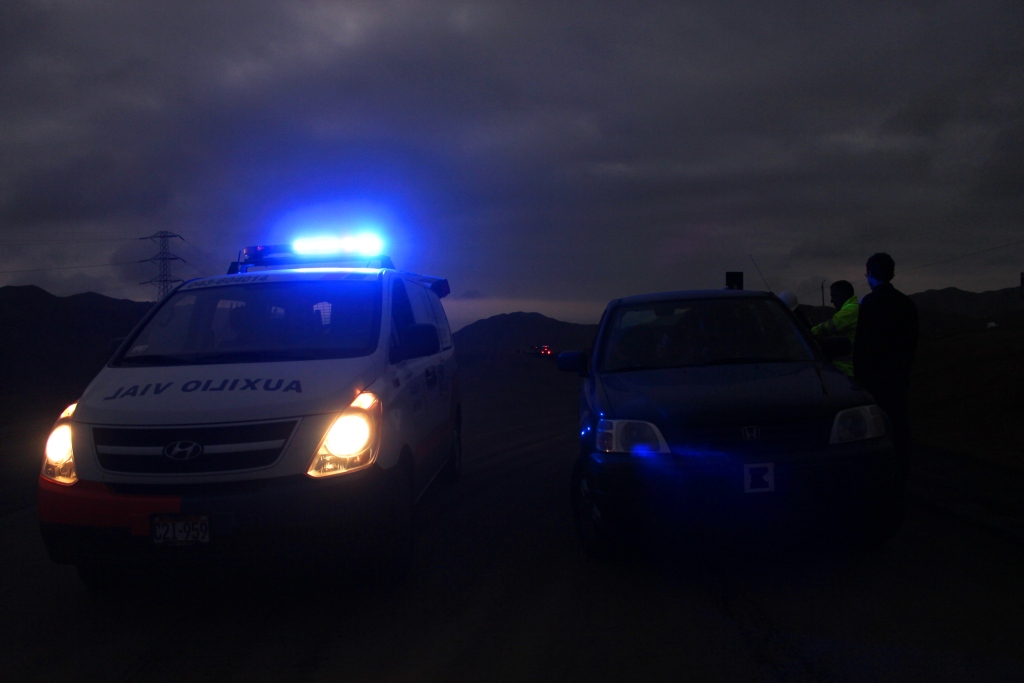 Roadside assistance puts gas in our CR-Van. We've been rescued!