Cuenca to Cusco Part 2 – The Vigilante

Our four day drive from Cuenca, Ecuador to Cusco, Peru was both long and eventful, so we’re going to break it up into pieces and give the rundown one segment at a time. Read Part 1 – A Ridiculous Border first if you want. This post covers the second half of our first day of driving, from the border at Mancar to Chiclayo, Peru. From the incredible to the outrageous – we couldn’t make this stuff up.

After leaving the border, we hopped from one small town to the next on our way south, noticing a roughness in Northern Peru and also a whole lot of trash in giant piles along much of the road. We were really looking forward to reaching Chiclayo and recharging for the night.

We pulled into Chiclayo after dark, and the town was abuzz with an energy not uncommon for a Friday night at 8PM. Our needs were pretty straightforward: ATM, food, hotel. Having grabbed some cash on the north side of town, we opted to continue on to the far side of town or at least until we found a well-lit area with places to stay. Soon we found ourselves on a crowded block with plenty of hotels and restaurants but too many people and too much traffic to be able to pull over and check them out. Ian is convinced that Peru can claim the western hemisphere’s worst drivers, and the final convincing moment came as we sat at a four way intersection and watched the cars moving perpendicular to us all pull out at the same time, meeting in the middle, both sides tossing their hands up as if they had been wronged, everyone stopped and waiting for someone else to fix it. It was like an unreal cartoon traffic jam and all we could do was laugh and make a quick turn onto a side street before we were stuck in the mess. After grabbing a loaf of bread, some cheese, and a bag of potato chips for a romantic dinner in the CR-Van, we randomly turned onto a quiet street and were quite pleased to find a small hostal that we thought would put an end to our long day and begin our rest.

Perhaps we should have thought twice when she asked if wanted the room for an hour or for the night. Being rather optionless though (and also not all that skittish), we paid our S./30 ($10.80 USD) for the entire evening and started to get settled. We fed and watered the dogs and then tried to move the car to the cochera (gated parking lot) that was included with our room, but were told when we arrived that it was full for the night. Well, is it safe to leave it on the street? Our dog is a perra brava. No, no, it’s definitely not safe. Cars get stolen here all the time. Okay, well what should we do then? Hm… I don’t know. Blank stares. Waiting. Awkward silence. Nothing. Finally, a woman booking a room (she left with a big smile and a male friend an hour later) directed us to another cochera a block away, so off we went to check it out.

The woman working at this second cochera told us through the gate that she couldn’t keep our car overnight in her giant, mostly empty lot. We said we understood and asked her for any advice that she might have for us. She suggested that we come back at 10PM to speak with the vigilante (pronounced: vee-hee-lahn-tay). I mean duh, why hadn’t we thought of that? It all seemed so clear now. Why wouldn’t we just ask the vigilante for what he thought we should do? As we walked back to the hotel to wait out the 20 minutes until the vigilante arrived, we compared notes. Did she really say vigilante? Do we have any other options anyway?

At 10:15PM, the vigilante rolled up on his bicycle. His name was Carlos, and he was one of the most friendly people we had (and still have) met in Peru. Of course he would gladly watch our car, he said, but he was leaving at 6AM and could only help until then. That’s alright, we said, we’re leaving at 5. He showed us where to put our car and when asked, quoted us S./2 ($.72 USD) for the night watch. We thought maybe he’d said S./12 ($4.32 USD), because, you know, 72 cents to protect everything we own for 8 hours seemed like a pretty good deal, but when we asked again, he stuck with S./2. As we walked the block back to our hotel in daze, we took an assessment of the situation. We were off to sleep in a rent-by-the-hour hostal while we entrusted everything we owned to the vigilante we just met in a neighborhood where “cars get stolen all the time” for a hefty fee of 72 cents. No one could get into our car without the wrath of Maya coming down on them anyway, we told ourselves.

I was in a deep sleep (or as deep of sleep as you can be in with your husband on top of the sheets because he refuses to get under them – probably a smart move – and the T.V. on so that you don’t hear giggles rushing down the hallway) when a knock at the door awoke us both. Now friends, prepare yourselves. Ian opened the door and the receptionist standing on the other side said, I kid you not, “The vigilante came by. Your dog learned to turn on the lights of your car.” That is an exact translation. It still makes me laugh heartily out loud just to write about it. Ian went outside to see our miraculous wonder-pup, and indeed, Maya had made her way to the front seat and was barking ferociously at the vigilante when she happened to step on the button for the emergency flashers. As soon as she noticed Ian approaching though, she sank away from the dash and then squeezed guiltily back into the back seat while he stood stoically, saying nothing and trying not to laugh. Has she been barking at you all night? Ian asked the vigilante. Oh yes, he replied with a kind, unbothered smile, all night!

When we came out in the morning, Carlos was watching a show on his cell phone and Maya was cuddled up with Olmec, both dogs fast asleep. We paid our much appreciated vigilante, filled up at the gas station, and headed on down the road for another day of fun. 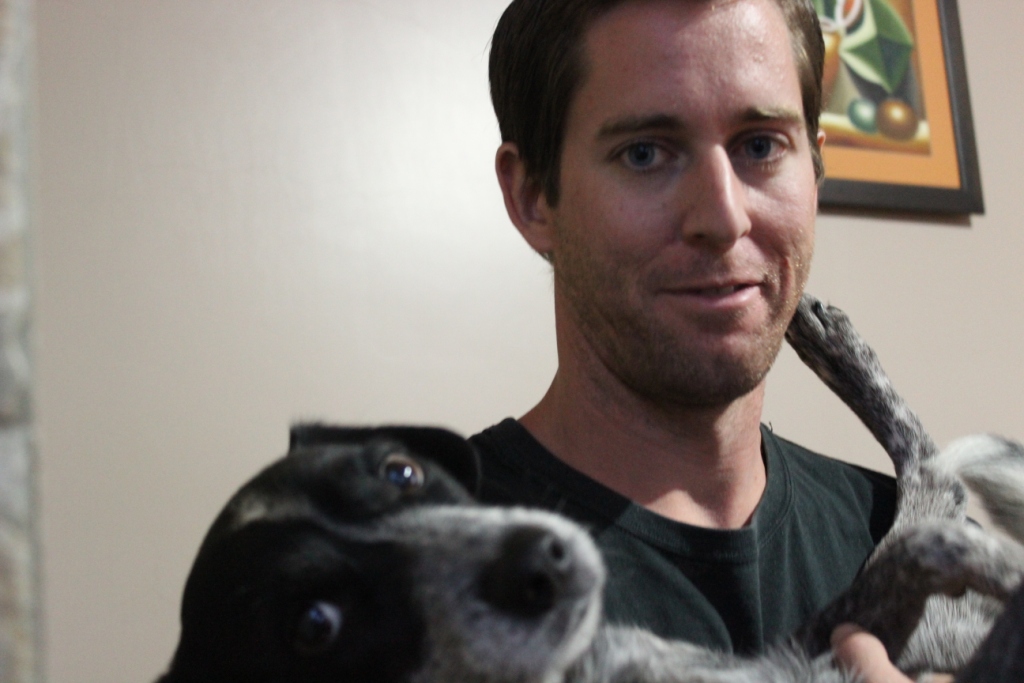 We didn't take any photos at all while in Chiclayo, so here's a cute picture of Ian and Maya from Ecuador instead. 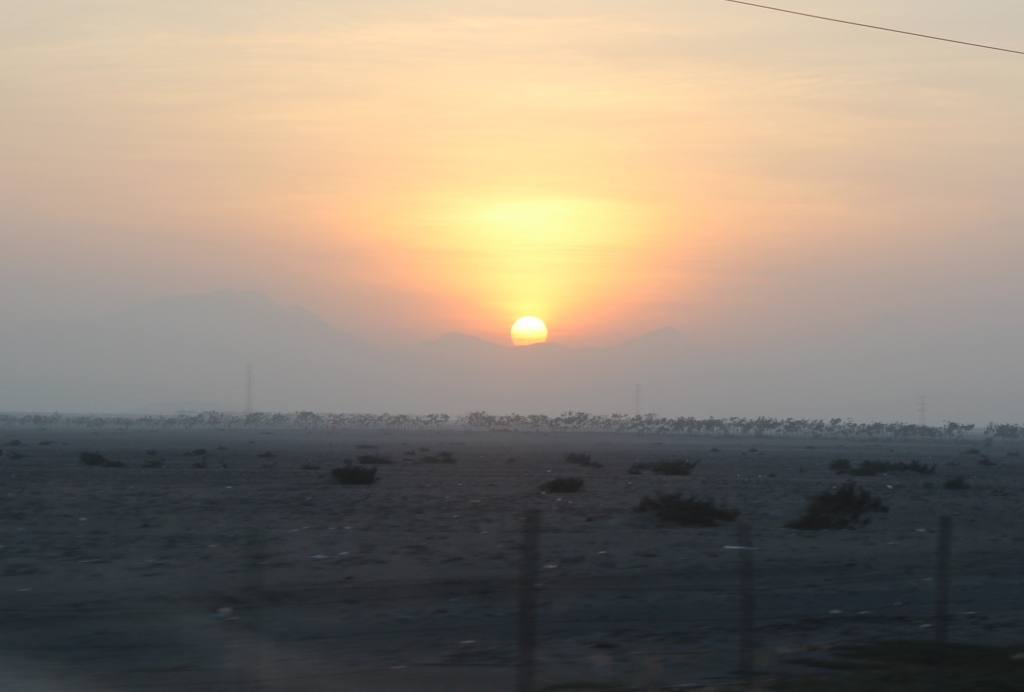 Sunrise as we cruised away from Chiclayo.