Our four day drive from Cuenca, Ecuador to Cusco, Peru was both long and eventful, so we’re going to break it up into pieces and give the rundown one segment at a time. This post covers the first half of our first day of driving, from Cuenca, Ecuador to the mountain border crossing at Macará. From the incredible to the outrageous – we couldn’t make this stuff up. 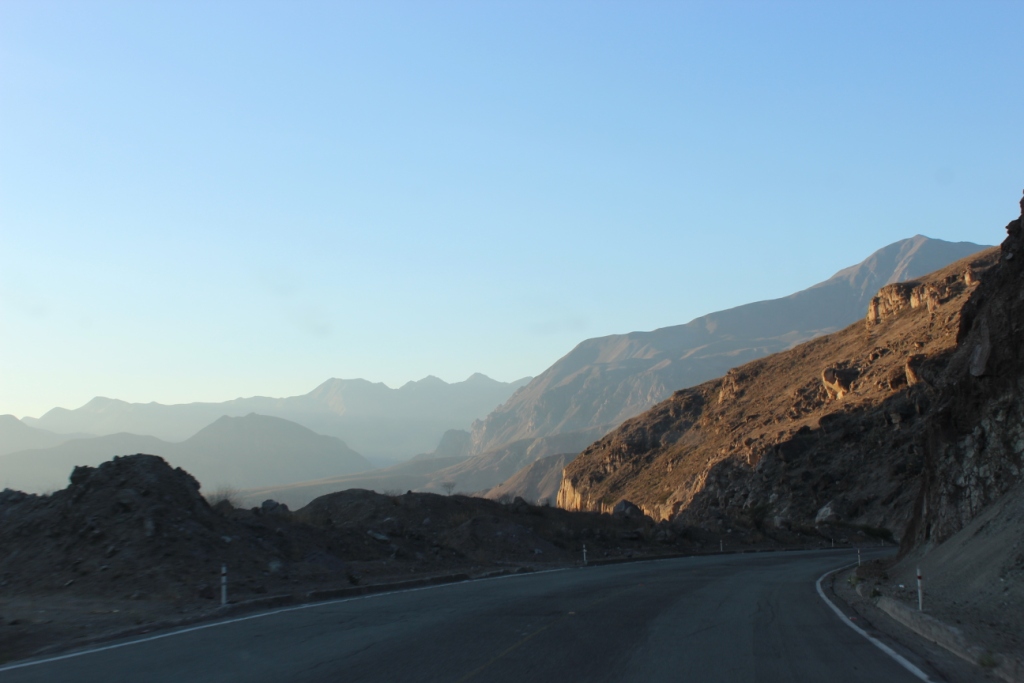 We left our apartment in Cuenca at 5AM, just as the dark sky was beginning to soften into the lighter blues of early dawn. A couple of days earlier we had worked out our route, opting to drive towards the Pacific via straighter roads and then turn back into the mountains to cross the border inland at Macará rather than on the coast at Huaquillas. We had been told that the roads on either side of Huaquillas were faster due to their not being in the mountains, but our research on the border crossings themselves had us leaning heavily towards staying inland as our experience has been that we (and the dogs) tend to fare better at quiet crossings than we do at busy ones. Additionally, despite the difference in speed, the routes were supposed to take about the same amount of time. Mountains it was. We drove through beautiful, tan-colored ridges, dipping at one point down into a Central America-esque jungle complete with rows of banana trees before reaching the border at the Macará River.

I will certainly still be writing our usual border crossing post with the more boring details and “how to” type information, but our experience entering Peru deserves a bit of its own attention. After successfully exiting Ecuador with both a stamp in our passports and a cancelled temporary auto import permit, we drove across the bridge to the Peruvian side of the border and legally entered the country with stamped passports at migración. Aside from an extra aduana (customs) officer on the Ecuadorian side making a distinctly negative but not entirely clear comment regarding our home country that included the words “Osama” and “amigos”, everything was rolling along quite smoothly. Just a temporary auto import permit from Peruvian customs and we would be set to go. As we usually do at this step in the process, we approached the aduana office with all of our copies in tow (passport, license, title, registration, etc), and as sometimes happens when we begin the rundown, the agent informed us that we would need a copy of the vehicle owner’s entrance stamp to Peru. Alright, no problem, that’s pretty typical. If you can just point us in the direction of a copy vendor, we will get it taken care of and be right back. It was at this time that the quite nice customs agent informed us that we would need to go back to Ecuador for a copy. You mean to the other side of the bridge where their border station is? No, to the town a few kilometers back down the road. In Ecuador. We should go back to the country that we had officially exited in order to get a photocopy of a stamp that said that we were legally in a different country. Um… no. While you’re at it, he continued, be sure to buy the auto insurance that you need at that building over there on the hill.

Off we headed, unsure of how we were going to handle all of this, but in silent agreement that we needed to leave the aduana porch for a few minutes in order to host a private pow wow for strategies. With a laugh, we opted to start at the restaurant with a sign in front of it advertising SOAT for sale (SOAT being the official obligatory auto insurance which can be bought by the month or by the year). After climbing a metal ladder of sorts to reach the small establishment, a woman working there instructed us to go around to the back side of the building to buy our insurance. Alright, sure, no problem. We weaved our way through a couple of men taking naps on the side of the building and rounded the corner to find what looked to us like someone’s home. Through the open door, we could see a small living room of sorts that opened to a kitchen which connected to the the spot in the restaurant where we had just been standing. Certainly this couldn’t be right. A man walking by kindly pointed us towards the living room. We stood in the doorway and waved as the woman who had sent us to the back of the restaurant walked by and, as if it were some kind of annoying surprise that we were there, called another woman to come help us. This second woman was brash and difficult to understand. She called us in to the concrete structure, plugging in the light on the kiosk next to the sofa so that we had to dip underneath the cord to pass before standing at the small podium and requesting to purchase SOAT. In her living room. She asked questions regarding the type of car that we had, and we answered them. She informed us that she was going to need at least half an hour to get someone to write that information in Castilian (what??) on our title so that she knows we’re not lying. Well, there is no one here and our car is parked on the street right outside; you can see it from the window if you like. After a bit of playing dumb and pushing to get moving, another woman agreed to look out the damn window for us, and alas, we were telling the truth. We filled out the form ourselves, offered an unnecessary olive branch apology for my actually quite decent Spanish (but you know, taking the blame seemed to soften her a bit; I even got called “mamita”), paid $8 USD for a month of insurance, and then moved on… out the back door of the restaurant house insurance store.

From there we ventured back to the Ecuadorian side of the river to see if perhaps someone at one of the small shops might be able to make copies, but to no avail. Determined not to partake in the level of ridiculousness involved in getting a photocopy of our Peruvian entrance stamp at a town in Ecuador, we headed back to aduana and plead our case. A Department of Agriculture agent finally put a stop to the runaround, clearly sick of listening to it himself, and advised one of the officers to just make the copy for us. It was done quickly and easily at a desk five feet away. For the next hour and a half we sat on a small wooden bench outside of the aduana office and collected a solid layer of dirt on our faces, compliments of the wind and dry land, occasionally getting up to check on the dogs, get a drink, or help the aduana agent to put our information into the system. When we first arrived he had informed us that the guy who could help us was at lunch, but after a while, he started in on it reluctantly, hunting and pecking, clearly pained by the introduction of a computer to his job processes. It reminded me of my Grandpa’s first work issued laptop and the deep seeded disdain he felt for the new system that “had worked perfectly well before they changed it!” But regardless, this sweet gentleman was plugging along, trying to help us get moving. Just as he completed the last field on the form (I know because I was helping him with what to type in each box), the system crashed. I think I felt worse for him than I did for us. What can I do? he asked me sadly. I don’t know. I was just beginning to suggest that maybe it was still possible to create a permit by hand when the agent’s eyes lit up and he jumped from his seat to greet his coworker, a younger gentleman who had been at lunch and could surely fix everything. Indeed, within ten minutes our permit was printed. All we needed to do was sign the documents and write our Facebook (pronounced Fays-boo) accounts down and we would be set to go. Peruvian customs wants our Facebook information? Sure, why not. 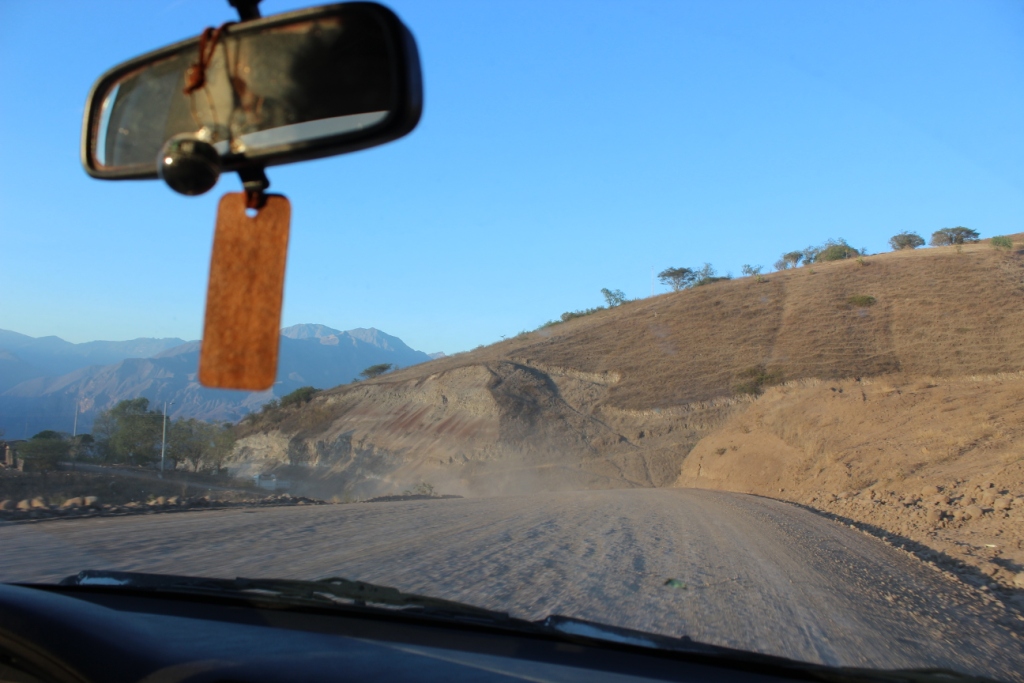 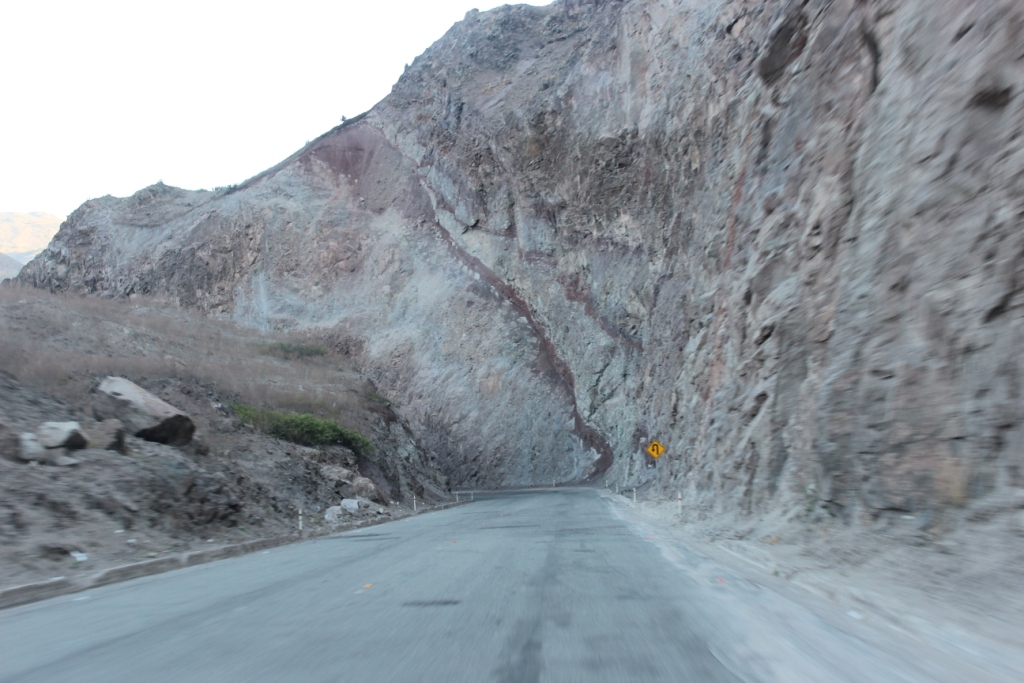 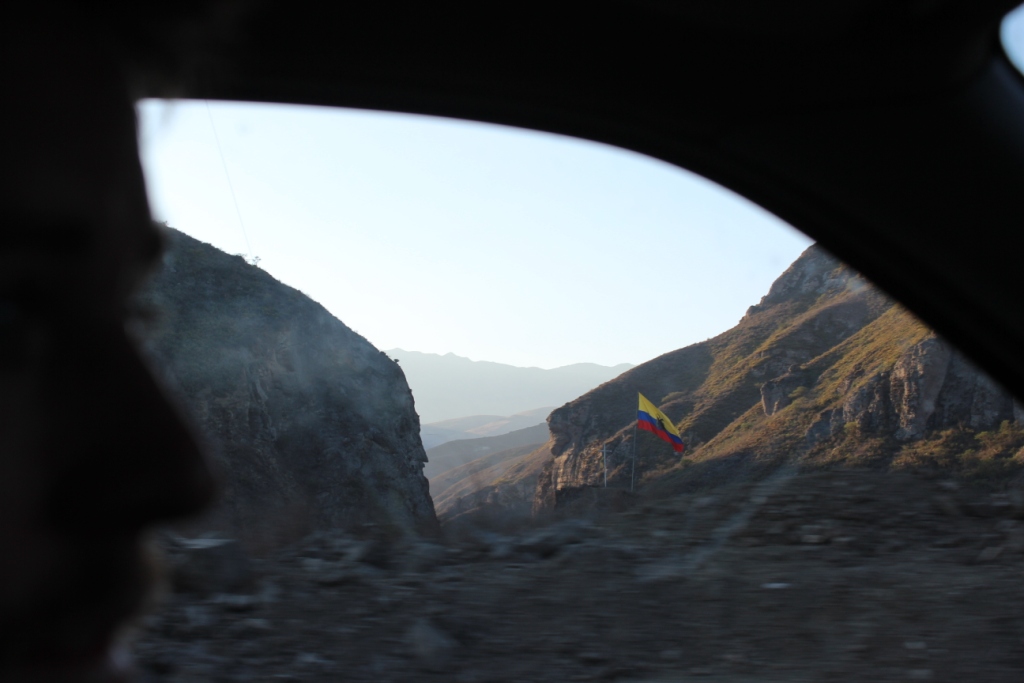 Ecuadorian flag in the mountains. 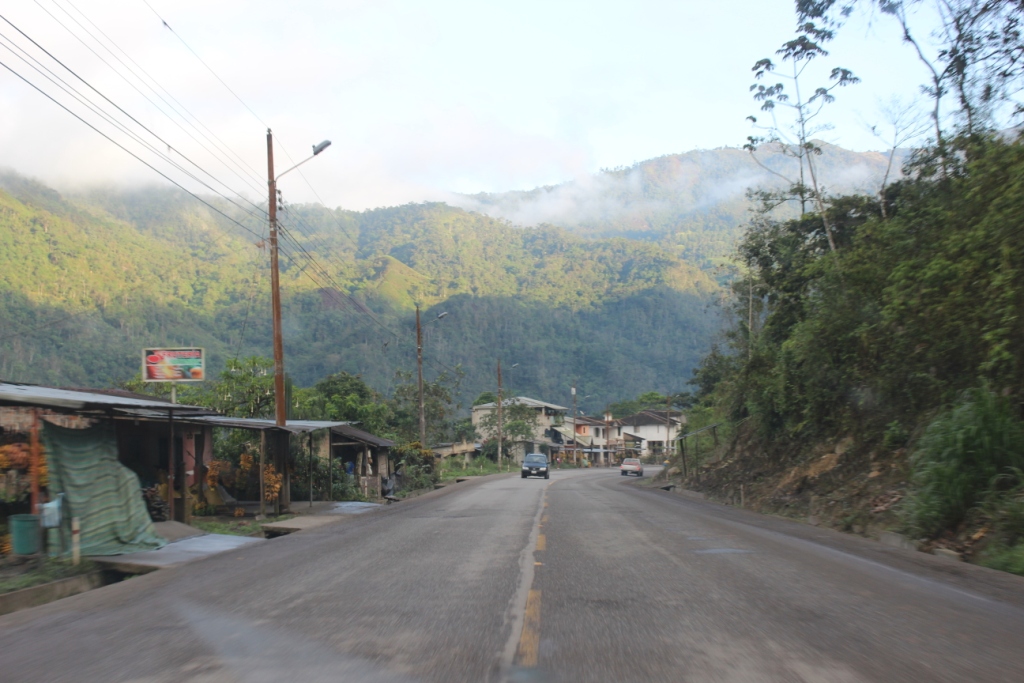 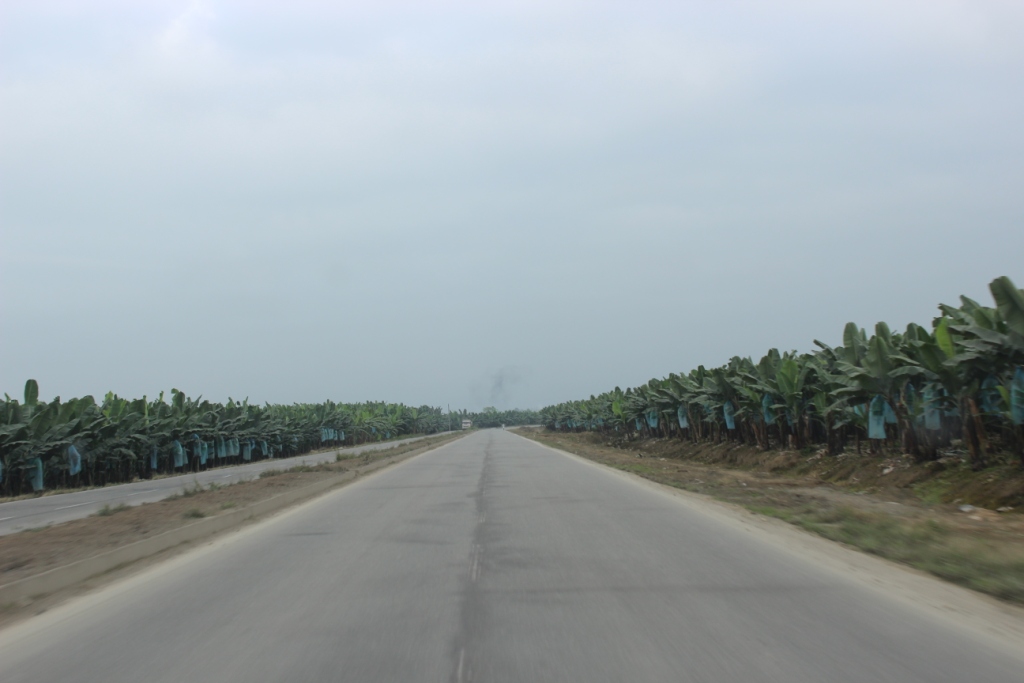 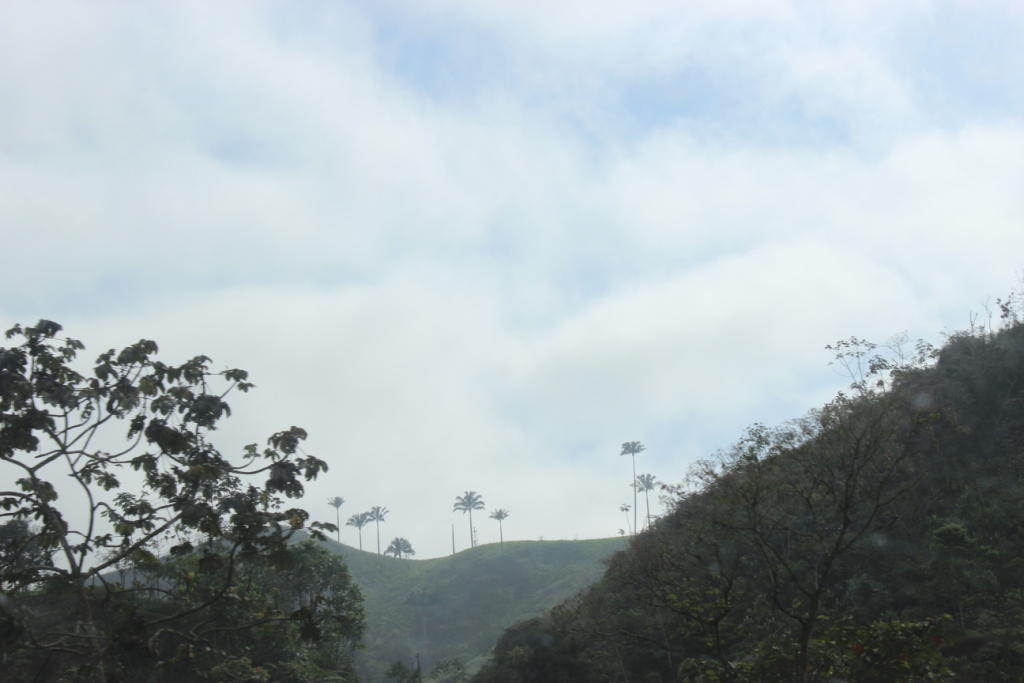 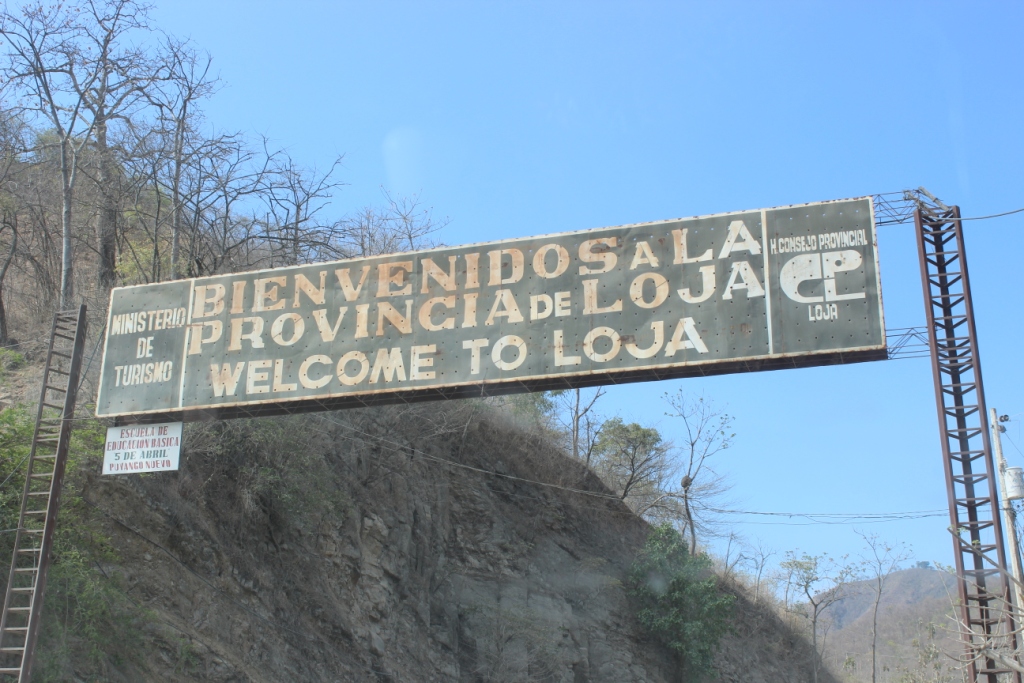 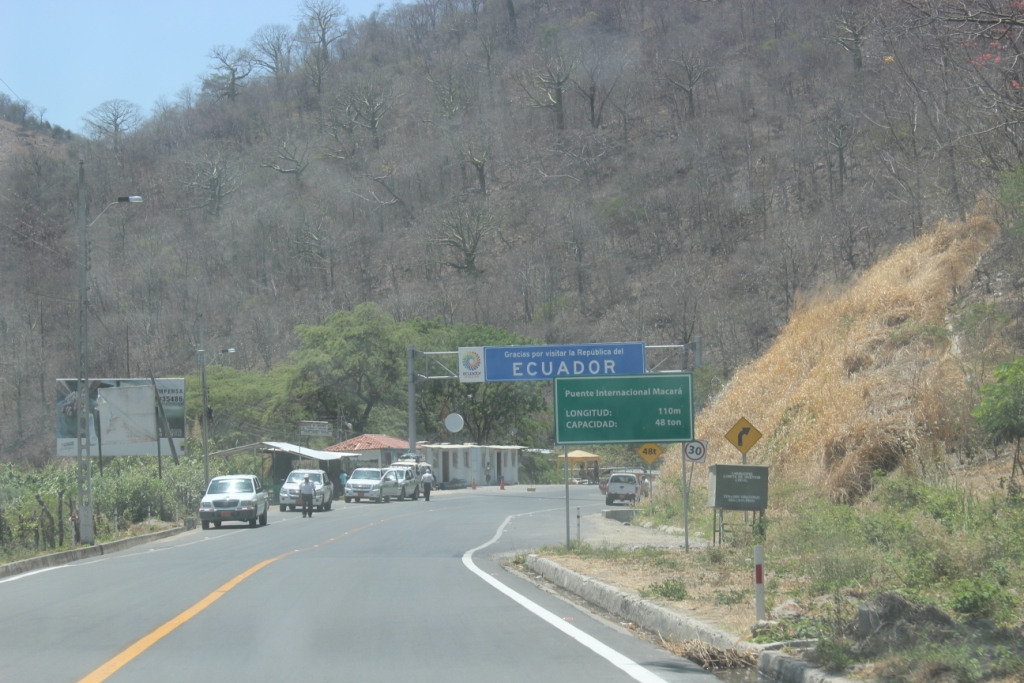 Approaching the Ecuadorian side of the border.