Computer Trouble in Paradise – Part Two: The PC Doctor is In 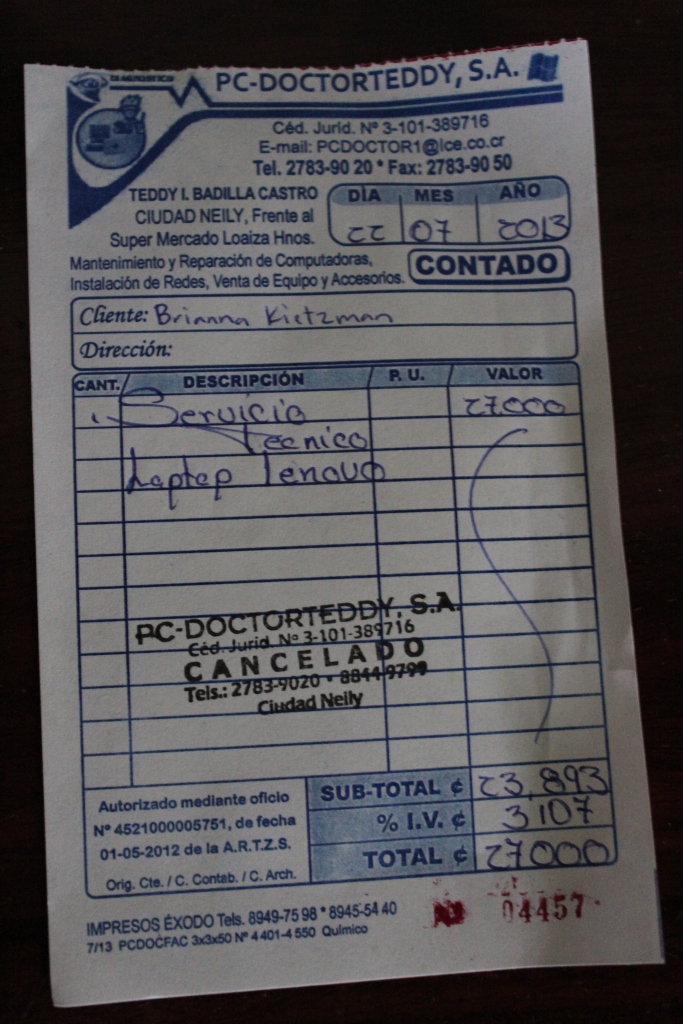 In case you missed it, here is a link to Part One of this saga.

Broke-ass computer in tow, we pulled into Neily around lunchtime. The PC Doctor wasn’t hard to find, right across the street from the largest grocery store in town on the main drag. We stumbled into what looked like a pretty normal internet café, waited at the counter for a moment, and then were directed to a separate room in the rear of the building, filled wall to wall with all sizes of electronics. The heat of the place was impossible to ignore. Though short of stifling, the thick still air hung heavy; it seemed a terrible place to work on electronics. A gentleman was reassembling a computer while a local lady he seemed quite familiar with sat across a desk from him. She read a newspaper, every few moments tossing around random comments about what was going on the world. Eventually she took her leave. We introduced ourselves and explained our problem. Teddy listened intently. He took my laptop from me and started in to his work. First a power cycle, then a replacement power cord, then he disassembled the chassis completely and produced a multimeter from a drawer. Being a Saturday, he had three young boys in tow for the day. We watched as they played a game of hide and seek among the wreckage of the room, the smallest one occasionally crying out when the older two ganged up on him.

After awhile Teddy confirmed what I had feared, the motherboard was the culprit. He could try to repair it for about $100. If that didn’t go well, we were looking at ordering a new motherboard from the States, something Teddy expected to take ten days to arrive and cost $250. Fixed or not it would be ready for pickup Tuesday, at which point we could decide if we wanted to order the part or not. This of course meant a full weekday down the drain. In retrospect, we probably shouldn’t have made that a big deal, but instead we asked if Monday was a possibility, explaining what we have learned sounds to most people like a ridiculous employment situation. Teddy thought for a moment, and said that yes, he could have it ready for us Monday morning. What a guy! He also had a SATA-USB connector and could send us home with my hard drive so I could access any files I might need. So we had that going for us.

By now we had way too many ideas and way too many unknowns floating around in our head. Lots and lots of questions and maybes and ifs, but no answers. Maybe he could fix it for $100. Maybe not. Even if he did, how long would it last? Did we even have ten days to wait for a new motherboard? We were supposed to leave in two weeks, leaving us little room for error (something we’d come to expect when dealing with postal systems in Central America). If we had the time to wait, was it worth paying $250 and losing two weeks of productivity in between? Should we just drive to San Jose and buy a new computer? The border! Most everyone in Zancudo had told us about the Zona Libre at the Costa Rica-Panama border, a duty-free shopping zone with the best prices around. The locals apparently took periodic trips to the border to stock up on essentials. They might have decent laptops there, and we could just buy a new one and be done with it. There was only one way to find out, so we left the disassembled laptop with Teddy and cruised a half hour down the road. We found a couple places with laptops, to be sure, but unfortunately nothing suitable.

Back to Neily we went, tiredly trying to figure out what to do. Eventually we resigned ourselves to letting go of some amount of control. We asked Teddy if he could give us a call the next evening to let us know how the repairs had gone. We gave him our number, noticed that dusk was falling around us, dragged ourselves across the street to pick up a couple of Toñas from the supermarket, and began the 90 minute drive through the palm plantations back to Zancudo, knowing full well that we’d be making the same round trip journey again in thirty-six short hours.

Those thirty-six hours came and went. We did not hear from Teddy on Sunday evening. We figured he just neglected to call us, so Monday morning we were out the door at 7:30am headed back to Neily. Walking in, we headed toward the back. Teddy looked surprised to see us. My laptop was sitting, completely disassembled, approximately where it had been when we had left on Saturday. He hadn’t had time to get to it the day before, and was currently working on another project, but said he could start a bit later. At that point I decided that we should just have him put the thing back together and we could figure out some way to share Brianna’s computer over the next couple weeks. He said it would take about an hour. Okey dokey. In the meantime, we decided we might as well get some things done, so we sat down at a couple of computer stations in the internet café at the front of the building and started working. A couple hours later, the distinct smell of a soldering iron came wafting out from the back.

“Do you smell that?”

“I’m pretty sure Teddy is trying to fix the motherboard back there.”

Right. So now we were operating under the assumption that our wait was going to be a bit longer than anticipated. At least we had computers we could use. Over the next seven sweaty hours Teddy came and went multiple times, taking the computer, hopping in his BMW, and driving away for an hour at time, only to return saying he was getting close to either fixing it or exhausting his theories (we were never quite sure which it was) and disappearing to the back room again. I was pretty frustrated at being taken for this ride, and assumed he was going to charge us the full amount for an unsuccessful repair that we didn’t even want to be attempted, but we let him go about his work. At some point, we decided our day was over and again made our way across the street to pick up a couple Toñas before dragging ourselves back and finding a piece of cement a little ways down from the PC Doctor to enjoy them from while we waited for Teddy’s return. He eventually did come back, reporting that, in fact, he was unable to fix the machine. We trudged into the store, asked if we could buy the SATA-USB connector (we could), and asked what the cost was going to be. Turns out my day-long cynicism was entirely unfounded. After paying for the connector, Teddy only asked us for $18 for his time, saying that since he was unsuccessful we shouldn’t have to pay for the repair. What a guy! Finally, exhausted and at the same time dejected about the broken laptop and happy that we didn’t have to pay for a day’s worth of work that we didn’t want, we made our way back to the car and headed home, planning out how we might best use our time sharing a single computer over the next two weeks until we made it to Panama City.

Be sure to check back soon for Part Three to hear about the conclusion to this epic tale, with a special note on Lenovo’s super-helpful customer service.