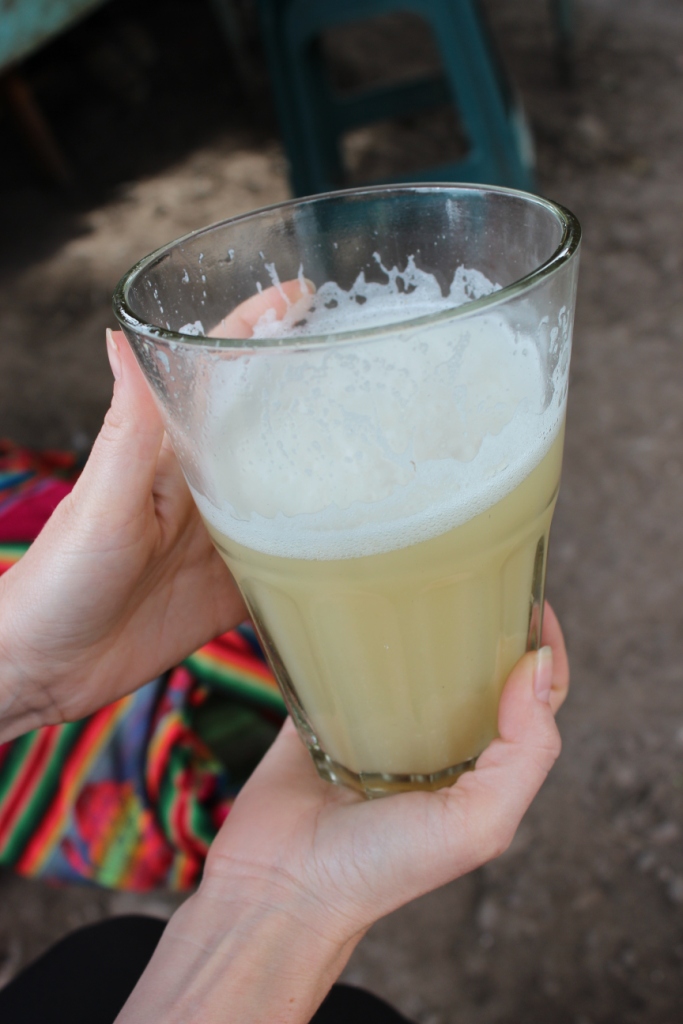 The simplest way to describe Peruvian chicha is to call it traditional corn beer. There are a number of varieties, including a strawberry version around Cusco called frutillada and many other fermented beverages that all fall in the chicha category, but for the sake of this post, we’re talking about the alcoholic beverage made from corn that has been consumed in the Andes for centuries. I remember learning about Chicha as part of Latin American studies in high school Spanish. We learned that it was somehow made by chewing on corn kernels and that it was sometimes fed to llamas at festivals before their ears were pierced. If the class couldn’t recall a single other answer during a test review, we all still remembered chicha, the corn beer.

Last weekend on our way back from Machu Picchu, Ian and I decided to try some. Having returned to Ollantaytambo by train, we were in the CR-Van cruising through the Sacred Valley towards Cusco. All through the valley, long poles had been placed along the road at 45 degree angles with red bags at the ends of them to signify that the marked location had chicha available. Traditionally, red flowers were used at the end of the poles, but only a few still do this, most vendors having switched to plastic. We passed through a few small towns before opting to stop at a chicha pole in a beautiful country setting with just a few farms and a handful of buildings. With coins and empty water bottles in tow, we approached the small tienda. A girl, maybe 8 years old appeared to be working the store alone and was serving an equally young customer when we walked in. They interacted like tiny women. Kittens and guinea pigs roamed the dirt floor freely. When it was our turn and I asked the girl if she sold chicha, she directed us to a separate building. I wasn’t entirely sure which building she meant, so she walked us outside and pointed to a narrow dirt path that lead into the corn field before skipping back into her store.

Welp, here goes nothing! We walked single file into the corn field, past a donkey, and over some straw.  Ahead was a small hut of sorts, with three half-walls made of mud bricks and a roof-like covering. Inside, a handful of heads with old eyes looked out at us without expression over the half-wall. Do you sell chicha? I asked, a bit nervously I’ll admit. Of course! Come in! Sit down! They were so sincerely welcoming and motioned to a large log along one side of the table they were sharing. Around the table were three men and two women. A few of them spoke only Quechua and wore traditional dress. The others translated from Quechua to Spanish for us and even taught us a few words of the indigenous language while we sat. In the corner of the hut were three large cauldrons. A younger, fourth man squatted next to them, the master of the chicha. Upon our arrival he scurried out to grab some glasses, washing them first, and then using a gourd to fill one before bringing it to us. It was enormous. I thanked him immensely and then received happy laughter when I suggested that maybe Ian and I should share our giant glass. Everyone at the table had their own huge cup full. When they got low or ran out, the man squatting by the cauldrons would refill them dutifully. The countryside was quiet and peaceful and a perfect breeze flowed through the hut while we sat and chatted with the unbelievably open and touchingly kind locals. They asked questions. We asked questions. They excitedly demanded that Ian take a photo. We requested more Chicha. They informed us of the natural elements that make Chicha so much better for us than beer. We paid S/.3 for our drinks ($1.08 USD). They offered us smiles. We thanked them for their generosity.

It was, without question, one of my favorite experiences of this journey so far. Twenty minutes shooting the shit with farmers in the Peruvian Andes over fresh chicha and the smell of the earth. Looking out over Huaynapichu in the ruins of Machu Picchu that morning, I was unaware that the day was only going to get better. But it did. And it was unexpected. And I think it’s moments like that that make life so beautiful. 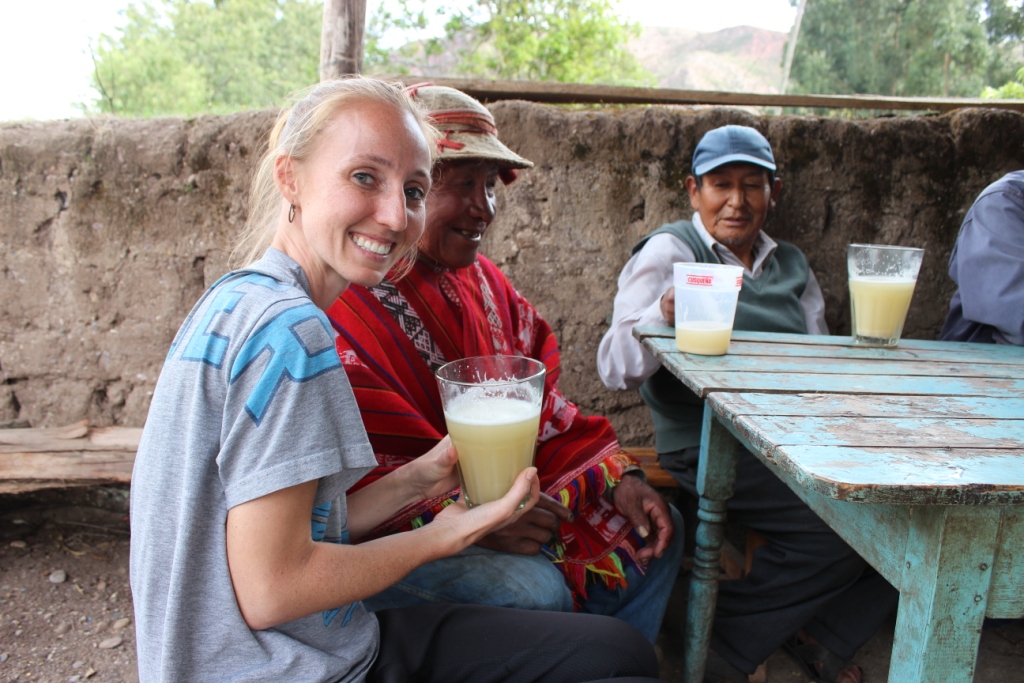 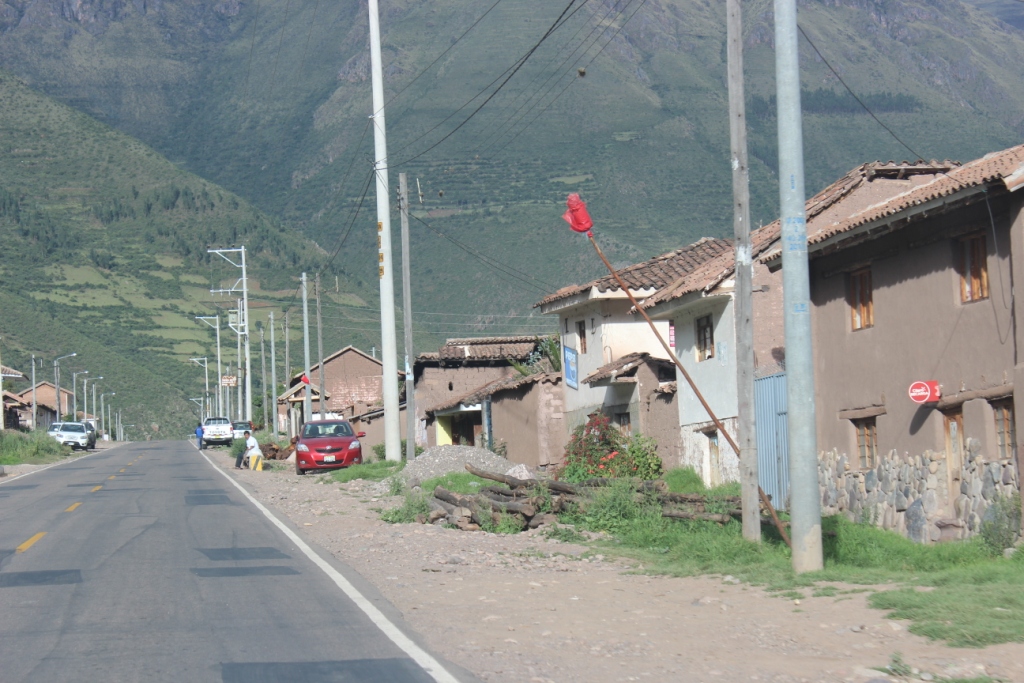 Chicha poles in a village between Urubamba and Cusco. This is not where we stopped; we were having such a good time that we forgot to snap a picture then!