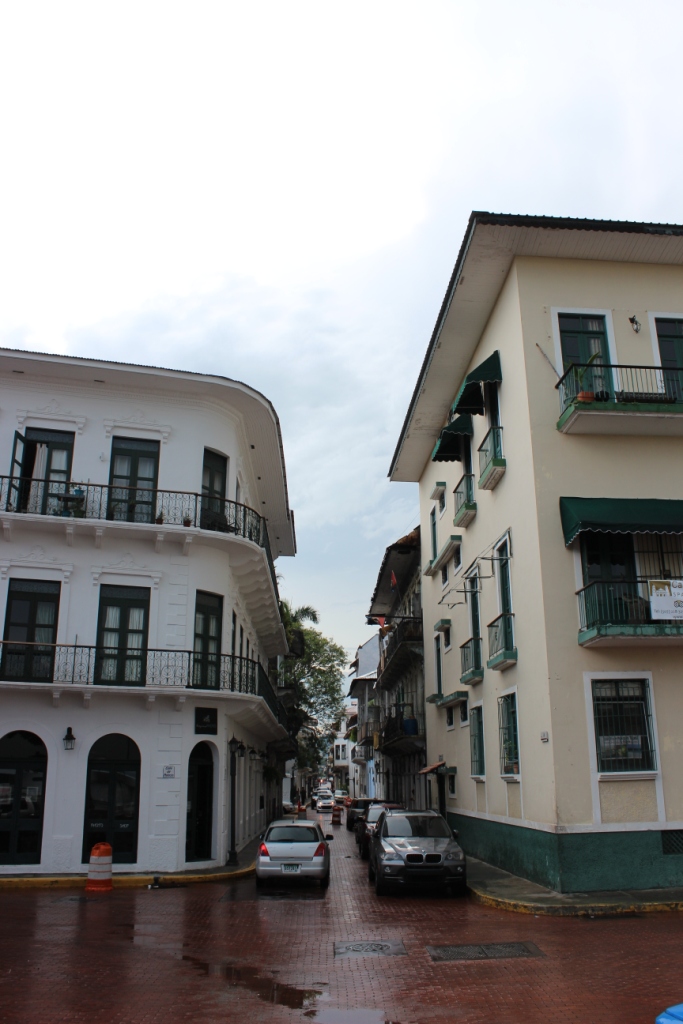 It started to rain as we climbed into the taxi we’d flagged down near the casino. Downpours are a daily occurrence in August in Panamá, but they’re also often fleeting so we carried on carefreely with our Saturday adventure. We had read that finding reasonable parking in Casco Viejo could be quite the challenge and also that a wrong turn into El Chorrillo, a notoriously dangerous barrio which despite sitting adjacent to a rapidly renewed and oft-visited neighborhood remains one of the worst areas in all of Panama City since the destruction and devastation of the 1989 U.S. invasion, could turn a nice weekend into a horror story, and thus the cab ride. After having been there, we concur with the world wide web; just take the taxi ($4 USD to, $8 back). With the drizzle picking up steam as we hopped out at the Plaza Independencia (or Plaza Catedral), we opted to do drinks and a snack before exploring and photographing. This is a pretty fantastic order of operations, but it wouldn’t have typically been the first thing on our minds upon arriving in shiny, metropolitan Panama City’s classic, old centro. The skyscraping apartment buildings, bustling freeways, and bright, sexy advertisements had been replaced by cast iron, second-story balconies, stone streets, and heroic statues. It felt like we had gotten into a cab in Miami and gotten out in the French Quarter.

It was soon pouring, and over and over we would convene under a balcony and scout out our next move before dashing through the heavy rain and pressing our backs against the wall at the next overhang, seeking refuge from the shower as we peered out into the streets or around the corner hoping to sight an open door with a cold beer inside. That is how we first explored many of Casco Viejo’s blocks, like cartoon spies jotting from one hiding spot to the next, splashing through puddles and me of course giggling all the while. We ran into blockades at the Presidential Palace (so apparently that’s in the neighborhood!) and toured in loops until we reached the northern point of the grid. Nearby, the covered outdoor patio bar at Finca del Mar with swings that doubled as seats was calling our names and as we sunk into them and clanked our bottles of Panamanian lagers together, a sense of relaxation swept over us. 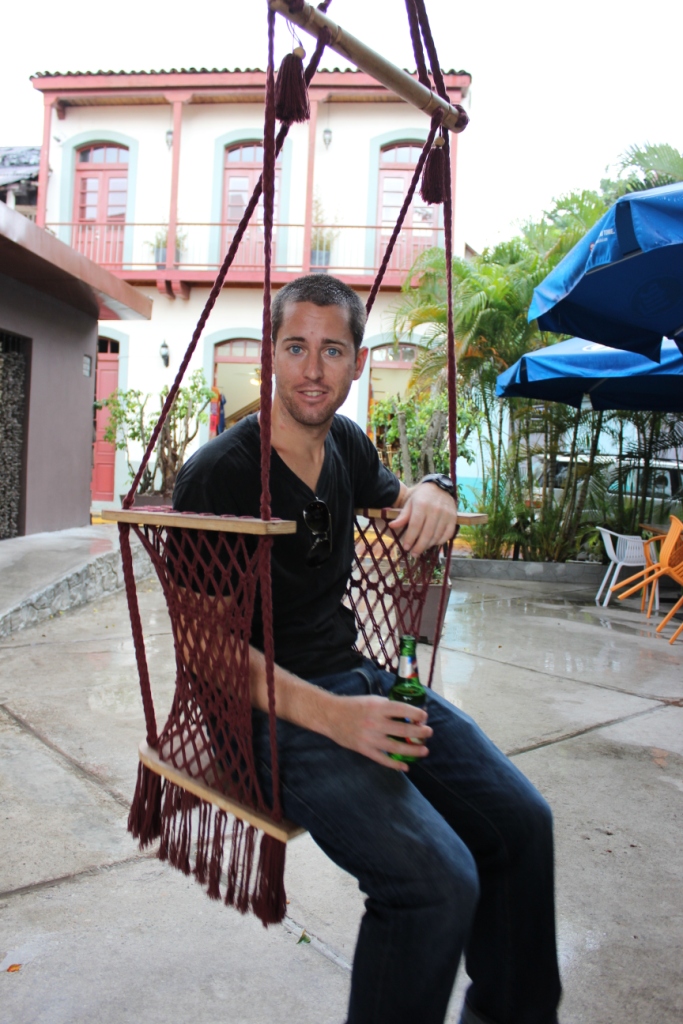 That calmness lasted all of 5 minutes before the hydro assault was joined by monsoon winds that defied all claims that rain falls “down” and instead engineered impressive horizontal sheets of water. We were all but drenched and starting to get quite cold when we realized that the restaurant also had a small indoor space. Genius mode! Though it did not appear that the dining room was open yet for the day, the staff was extremely cordial and accommodating, ushering us and the other two couples on the patio inside and serving us warmly despite how grossly out of place we were soon going to realize we were. The room felt almost sterile. Outside there had been music and rain and wind and staff members working on various projects. Inside it was completely silent, simple, warm, everything in an exact place. We hesitated to even walk across the immaculate floor in our dripping shoes or sit in the refined chairs with our soaked clothing, but the hostess smiled genuinely and assured us it was all fine. Sitting in the close quarters of the virginal vacuum, it was impossible not to notice that all three couples were drenched, poor-looking, backpacker-esque foreigners drinking cheap domestic beer in a plainly fancy establishment. It was hilarious and slightly awkward. “Are we supposed to talk to each other? Why is this room so much like a doctor’s office? Do the other travelers think this is crazy too? What language is everyone speaking?” we whispered to each other at our table 2 feet away from the next. This went on for another round of drinks before the clouds finally parted and the sun returned, signalling round 2 of our expedition. Note: There were no snacks enjoyed on this day. Fancy snacks are expensive snacks, and also we were hoping for nachos.

Our now leisurely exploration of Casco Viejo began at Plaza Francia where vendors were carefully clearing and removing the tarps that had been covering their goods during the storm and little boys were playing bare-fútbol around giant puddles. Casco Viejo is historic Panama City, settled in 1673 as a defensively designed and located borough after Captain Morgan burned the original Panamá (now called Panamá Viejo or old Pamana) two years earlier. The Plaza Francia was once the city’s main plaza, and as its name conveys, it has since been dedicated to the French and their canal effort. Up a wide set of stairs and around the obelisk at the top, we were suddenly and unexpectedly staring at an entirely exposed city skyline across the bay. After weeks in the jungle and months in other less metropolitan regions of Central America, it was shocking and fabulous to stand staring at a sprawling wonder of metal and glass and presumed progress.

Our walk continued through the Esteban Huertas Promenade and around Plaza Bolivar, by a number of churches and to the Canal Museum. Though every street was charming and wistful and many buildings have been beautifully restored, not everything in Casco Viejo is elegant and polished as is sometimes seen in revamped historical districts. Remaining frameworks stand like ruins (it seems wrong to call such authentic, veteran edifices “abandoned buildings”) on seemingly every block, and decrepit apartments with rusting trellises overlook high brow galleries and restaurants. Indeed there is still room for growth and development in the old barrio, but the allure of Casco Viejo isn’t in its perfection, it’s in the ambiance and conveyance of another time. It’s in the way it allows visitors of Panama City to experience both new and old, charming and flashy, rich and poor all within reach of a cheap taxi, and for now at least, a juxtaposition of what was and what is with collateral damage in the middle still visible for all to see. 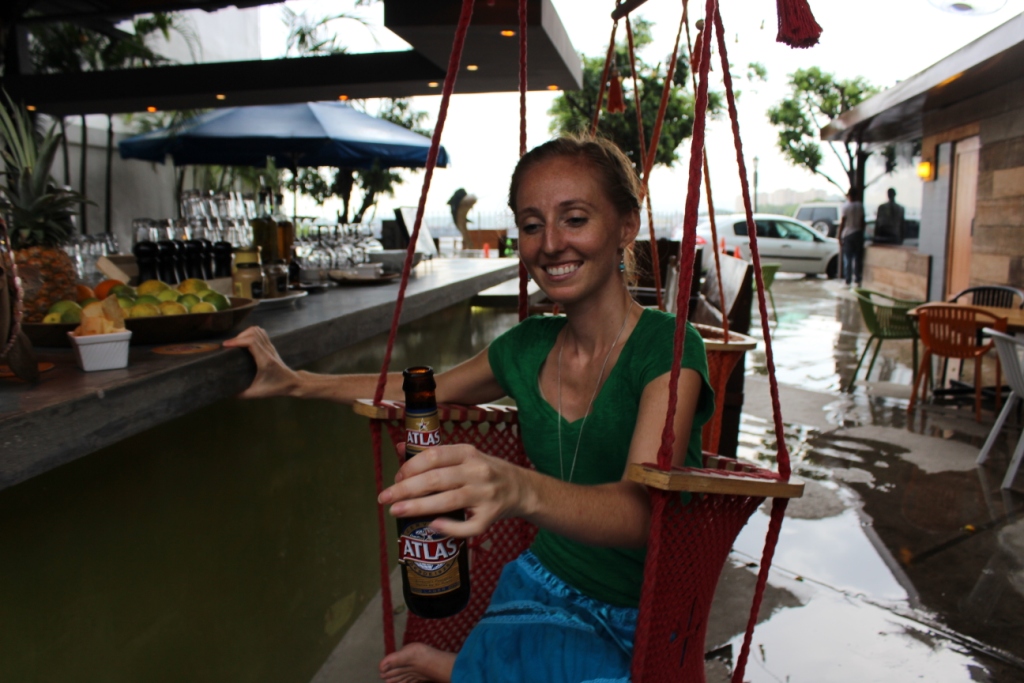 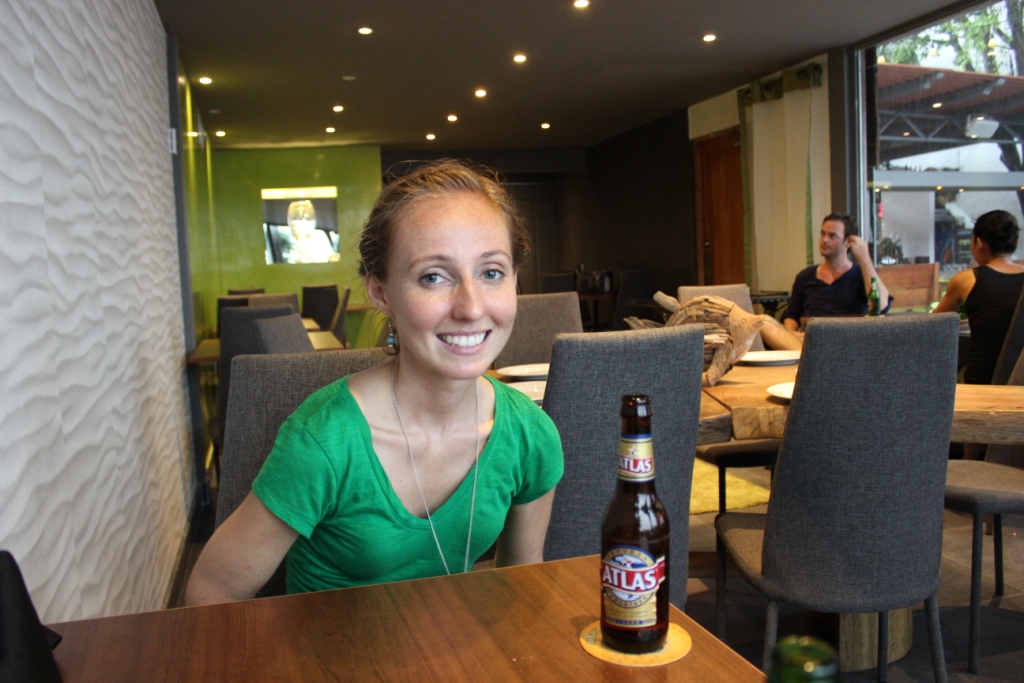 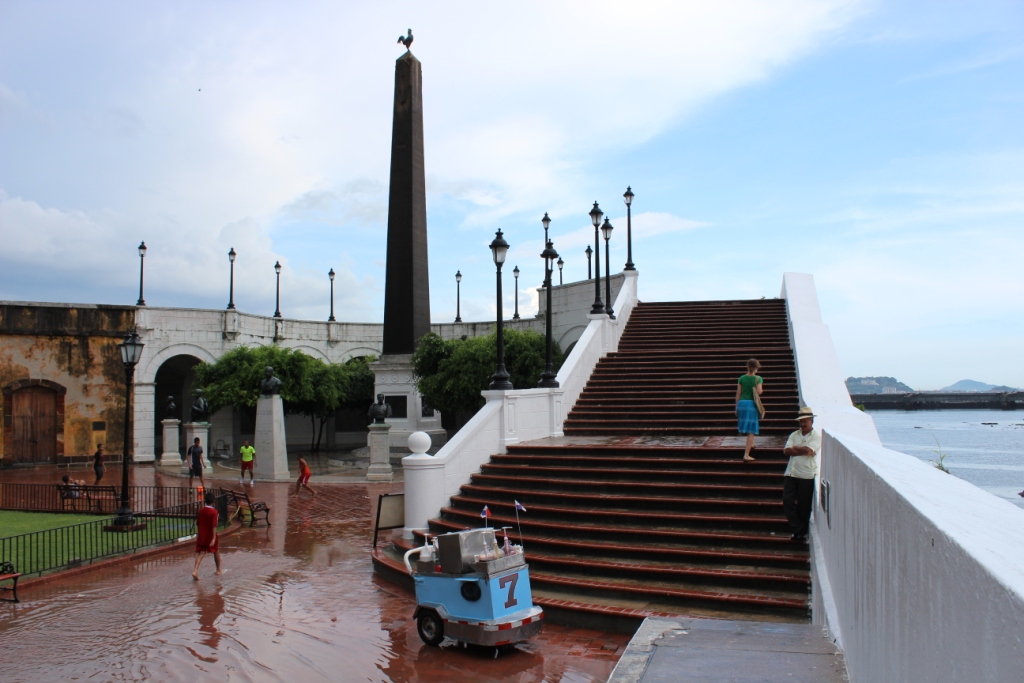 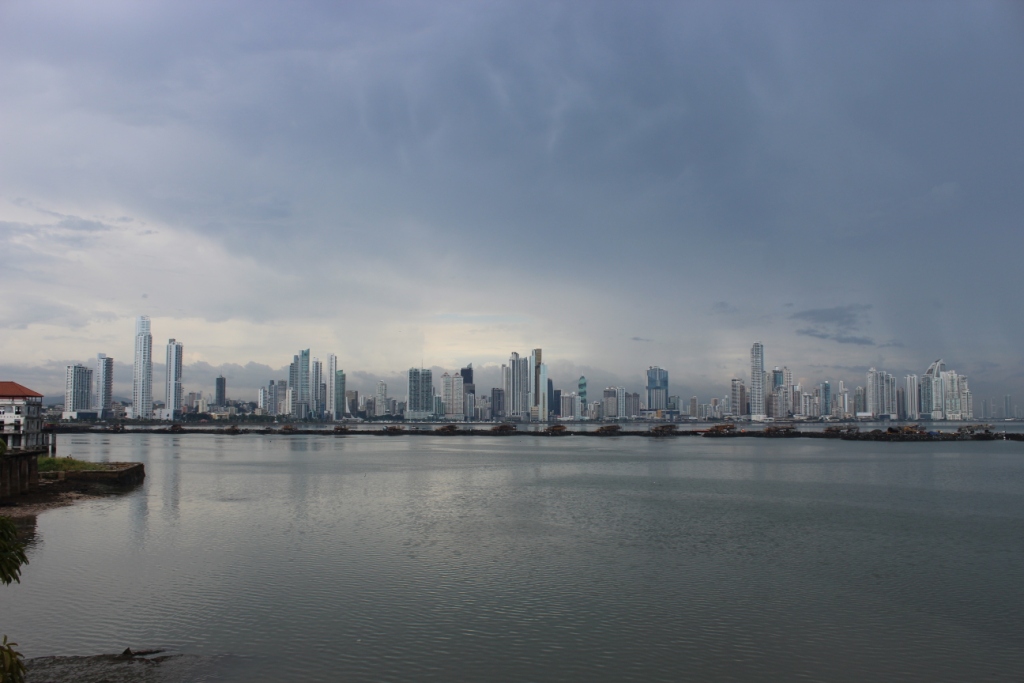 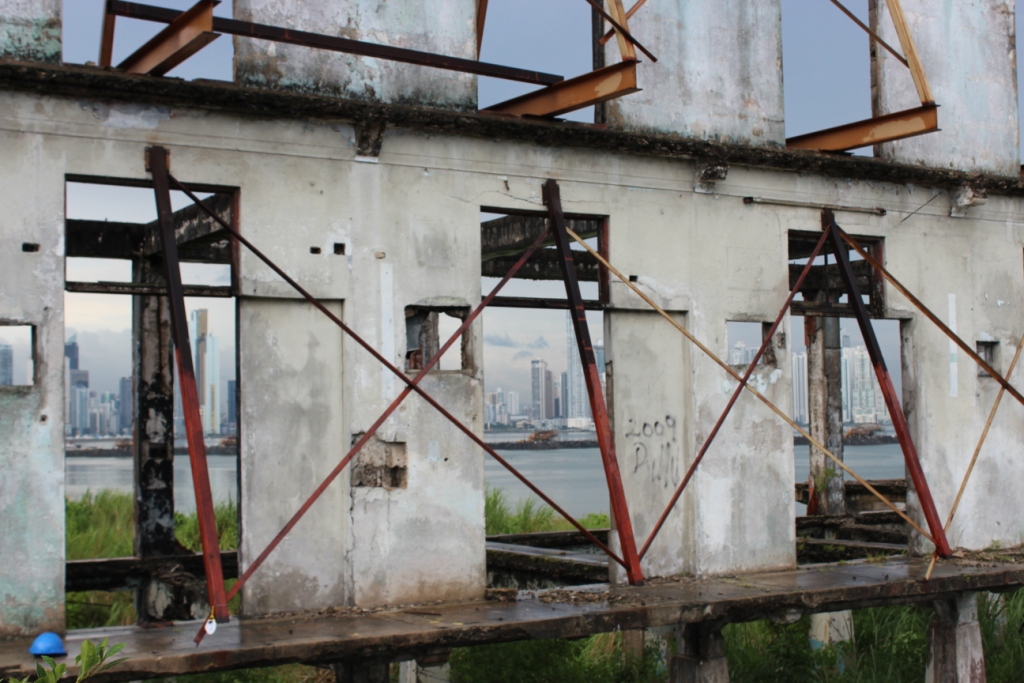 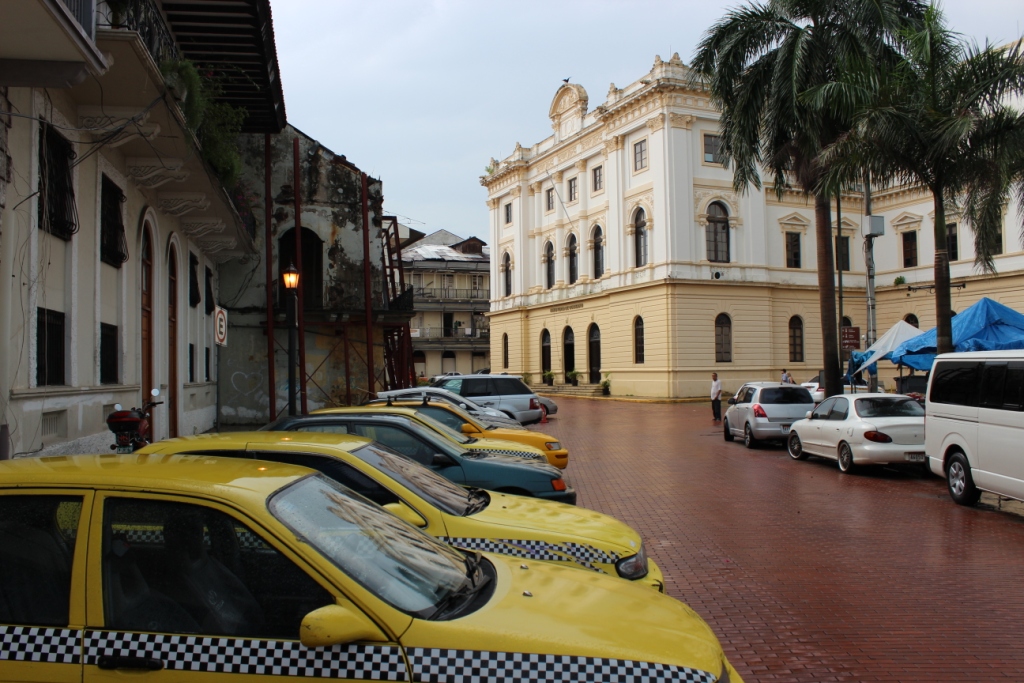 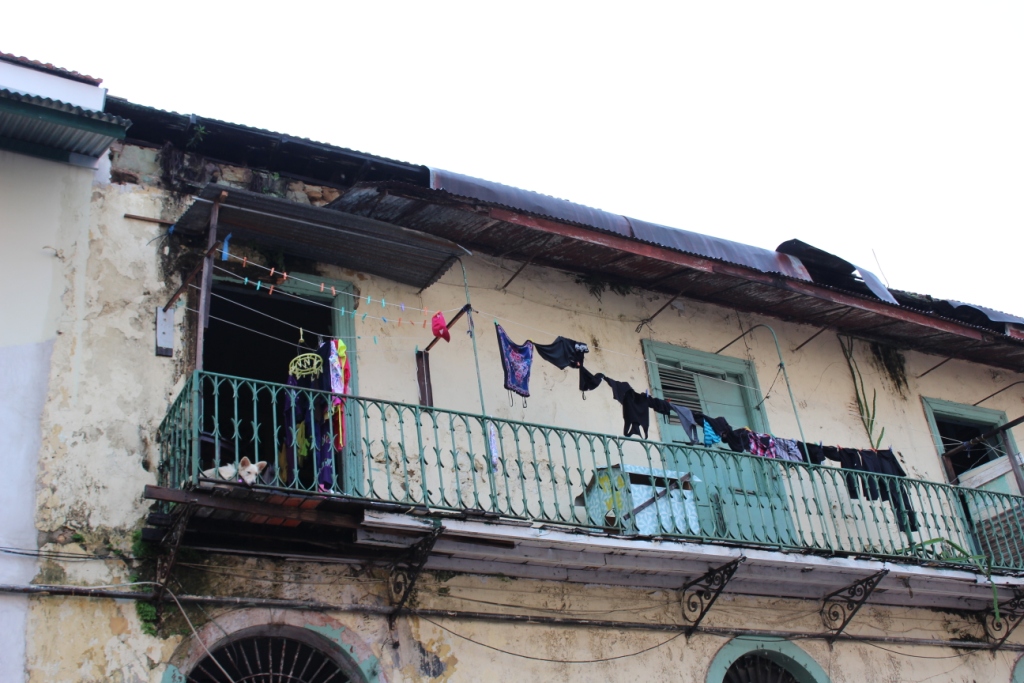 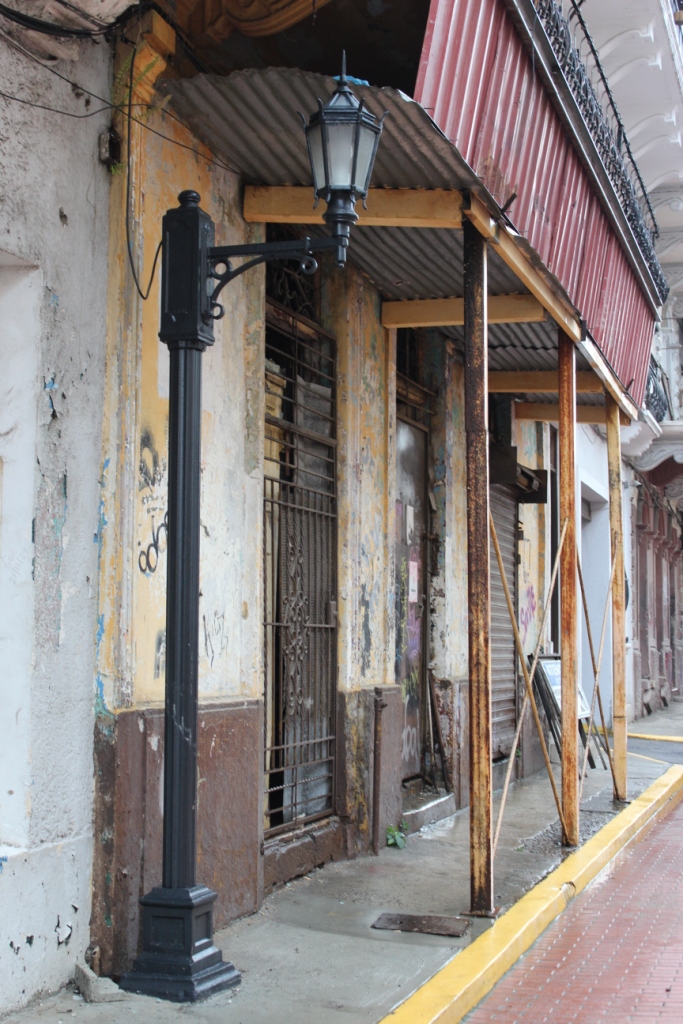 A Casco Viejo building that has yet to be refurbished 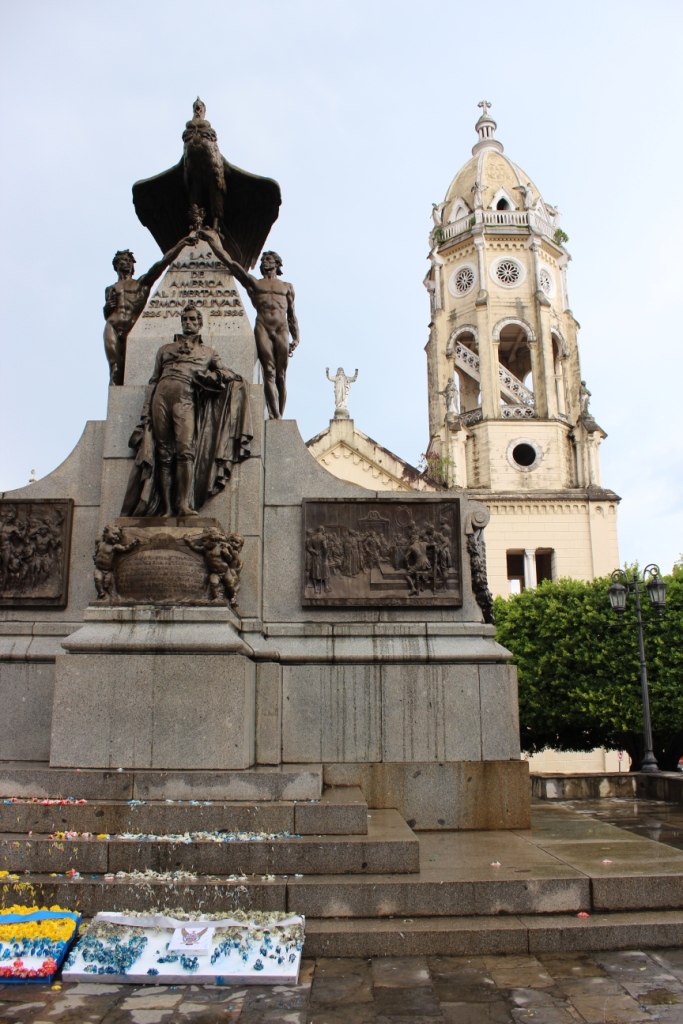 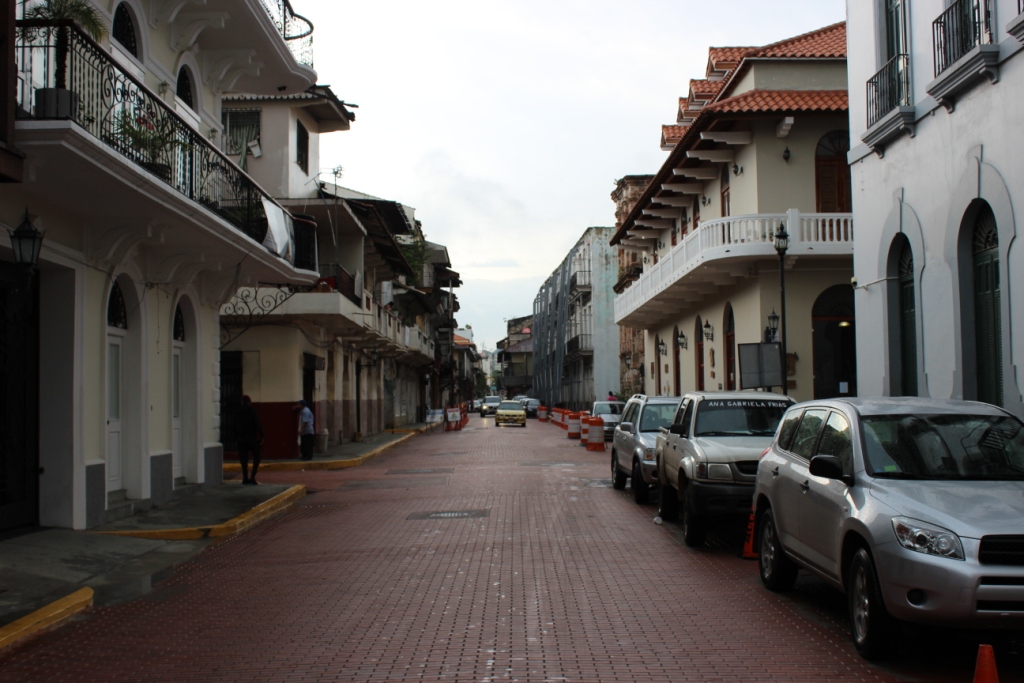 A street in Casco Viejo 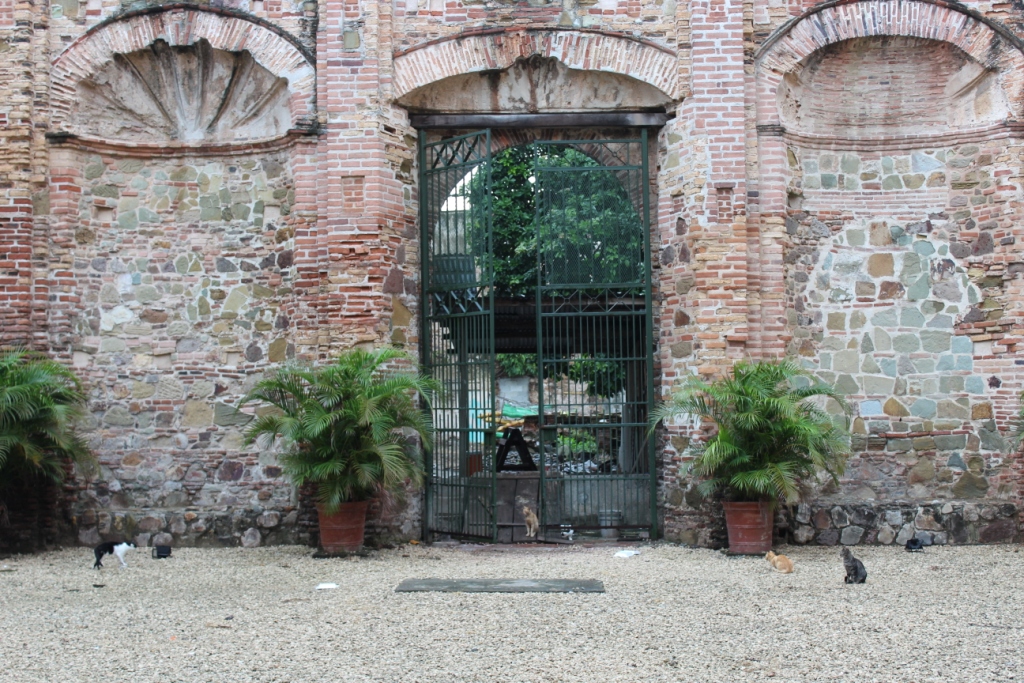 This may look like a photo of the remains of La Iglesia de Compania de Jesús, but really we were trying to capture the weird cat thing going on out front. Seriously guys, that's a lot of cats. And that was only a fraction of them. 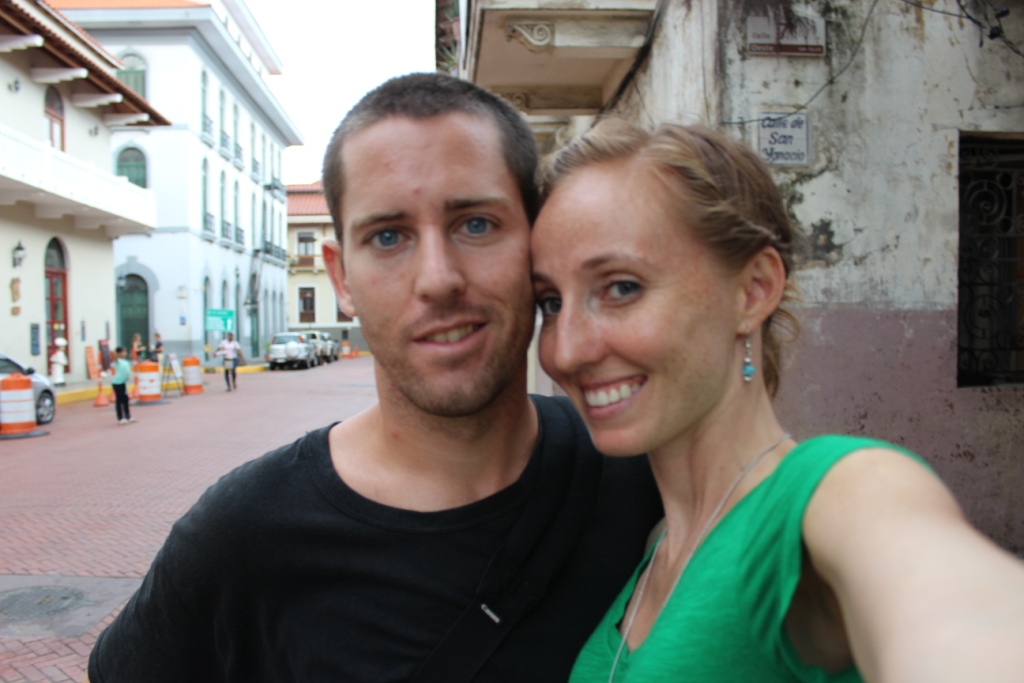