Candombe in Colonia: A Party in the Streets

April 7th, 2014 | Posted by Brianna in Celebrations | The Places We've Been | Uruguay

I was working at the table in the living room of our flat when I heard the drums in the distance on the first night. Their rhythms were the background noise to my evening on the job and occasionally I would open the window and lean out for a better listen. Eventually the volume began to rise and the sounds settled at the small intersection half a block away. In need of a break anyway, I pulled on some shoes and crept up the street where a few dozen people were gathered in front of a neighborhood store. I hung back in the dark, propping myself up against a building and watching on like a few others on adjacent corners. Six drums sat in the street while energetic young men brought them to life. A young woman in a long, high-wasted skirt and turtle-neck tank top embodied the rhythm in the sway of her hips, freedom of her steps, and flow of her arms, like a fire tied to the logs but otherwise independent in its movements. Around them, people milled about, watching on casually, buying drinks from the store, and enjoying the evening. Without the music, it would have looked like a backyard barbeque. The beat grew stronger, the volume louder. The drummers were smiling and sweating as they pounded the sounds out of their instruments. Louder and louder. My heart began to race as I started to feel the vibrations of the noise pulsing through me. It was hypnotizing. When the progression reach its peak and the rhythms came to an end on a climatically synced beat, the group hanging out in front of the store stopped to give cheer for the performance and then dropped back into conversations, some now including thirsty drummers and with an edge of excitement. A few of the drummers started in again immediately, massaging the canvas stretched across the tops of their instruments with loose, light, impromptu touches. I watched on for a few minutes longer, intoxicated by the night, before heading back home.

What was going on? Ian asked.

I have no idea.

A few nights later the sound of distant drumming caught our attention. If they come by again, I told Ian, we have to go out there. I want you to feel it, I said. He wasn’t as thrilled as I was. Yet.

When the troupe reached our corner, we headed out the door and up the dark street together. This is not what I saw before, I told him almost immediately. It was different, bigger, with five times the drummers, ten times the onlookers, dancers, costumes, flags, the works. And they were moving, like a small town parade except that the people watching stretched only the length of the parade and simply drifted down the street with the performers as though they were all part of the ordeal. Like leaves in a creek, we fell into the flow. People joined in periodically, dancing. Some folks stopped for pictures, others walked along behind in the street. We strolled alongside the drummers in awe. When Ian returned from a run home for the camera, we outpaced the parade and took a seat on the curb to let it pass us. A few lone flag wavers led the show, with the biggest flag, larger in area than a king-size sheet, in the lead. The young men swung giant heavy poles in various patterns to display the colors of their banners. Behind the flags, the half dozen groups of dancers were arranged in layers seemingly more experienced as they went on. Young, serious girls in front were working hard to get their steps right and find the rhythm in hips they had not yet developed. Behind them the older crews lit up the show with more natural movements, big smiles, and elaborate costumes. Their platform heels stepped out the beats on the cobblestone streets of modest Colonia, but their attire screamed Rio de Janiero. Sequin bras, feather hairpieces, beaded thongs, colorful wings, and many shades of skin glittered and shimmering. Some of the buttcheeks were young and firm while others jiggled a bit in the fresh fall air; they were all beautiful. Next was the oldest crew of dancers, donning attire that made them look older than they were, but covered in bright yellow sequins all the same. The coed group spun and twirled, exerting what must have been the most energy of any of the dancers. Men had fake beards and canes, women long layered dresses. The only dancers left behind them were a duo in purple – the female role in an enormous and grand Carnaval-esque costume and the male role in a shiny sleeveless bodysuit. A grid of drummers in sequin robes and strange matching hats drove the entire affair from the rear, scooting forward a few inches with each step as they banged out the beat that guided the magic of the whole boisterous proceeding. One of those hats, turned upside down and in the hands of a jovial young man in a robe, made its way through the crowd collecting tokens of monetary appreciation from the onlookers.

While the first evening I was rocked by the spirit and soul of the music, this second encounter left me inspired by the confidence, radiance, and lack of modesty in the dancers. Here in Colonia, a small Uruguayan town no bigger than the one I had grown up in, bare cheeks were dancing down the street, women of various sizes let their beautiful bodies show as they worked it out with the rhythm, and older participants twirled and spun with glorious abandon. It was family-friendly and fun and intimate. It wasn’t about butts or boobs or sex or being classy enough to earn the respect of a judgmental acquaintance. It was about celebration. It was about culture. Come to think of it… what was it about?

We still had no idea as we walked back down the now quiet street on our way home that evening. The experience was fantastic all on its own, but when I later started learning about the tradition behind the dance parade, I was even more intrigued than before. Candombe, an Uruguayan/African music and dance style, traces its roots to the millions of Bantu peoples brought to South America at the Río de la Plata as slaves in the 18th century who further developed the rhythms during the colonial era at least in part as a tool for communication and defiance. Many of the elements and idiosyncrasies of the dance parades hold deep meaning, and the symbols embedded within the tradition offer insights to a past not forgotten. One haunting example is the shuffling gait of the tightly ranked drummers, which reflects the strut of chained ankles covering little ground with each step as the group progresses. As such a powerful link to the history of region, it is not surprising that Candombe is a significant part of Uruguayan culture, especially among the Afro-Uruguayan population. Performances like the one we had the pleasure of enjoying that evening in Colonia play a major role in the Desfile de llamadas, a huge party in Montevideo during February’s Carnaval. Smaller parades and ‘jam sessions’, for lack of a better term, occur far more frequently as we learned first hand, and since that evening, I’ve noticed the drums around town on several occasions – sitting next to a person on a bench, being toted along by an individual exiting a car, hanging across the back of a drummer walking down the street. After weeks in Colonia, it is still these instruments and their songs that most deeply draw me to the culture of Uruguay.

If you’re interested in learning more about this compelling part of Uruguayan culture, check out this Wikipedia article, this Upside Down World post, or this Candombe website. 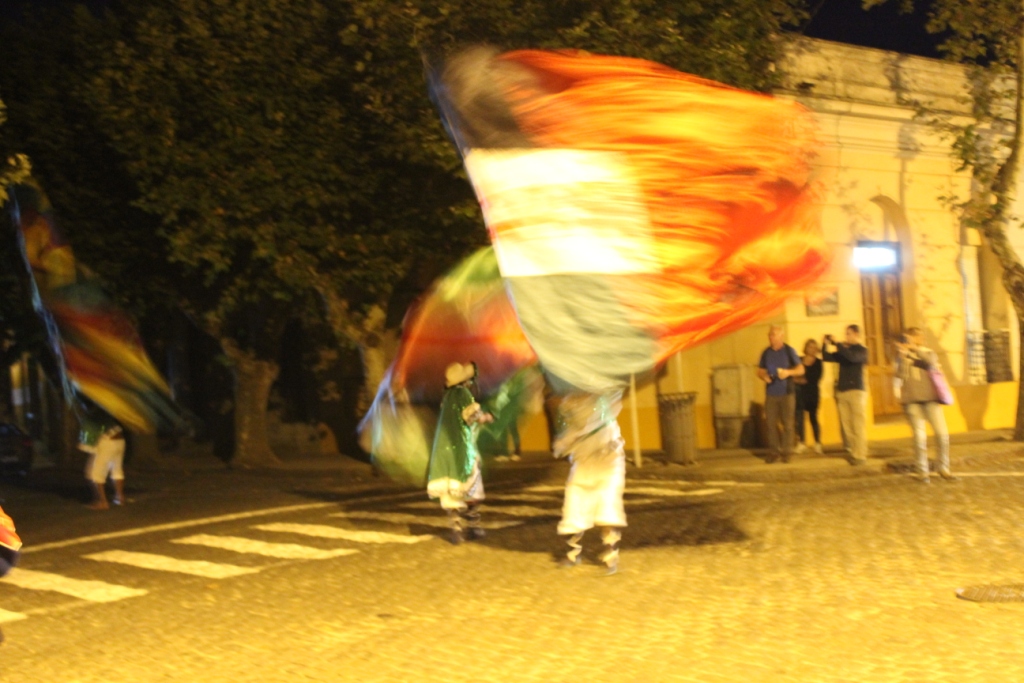 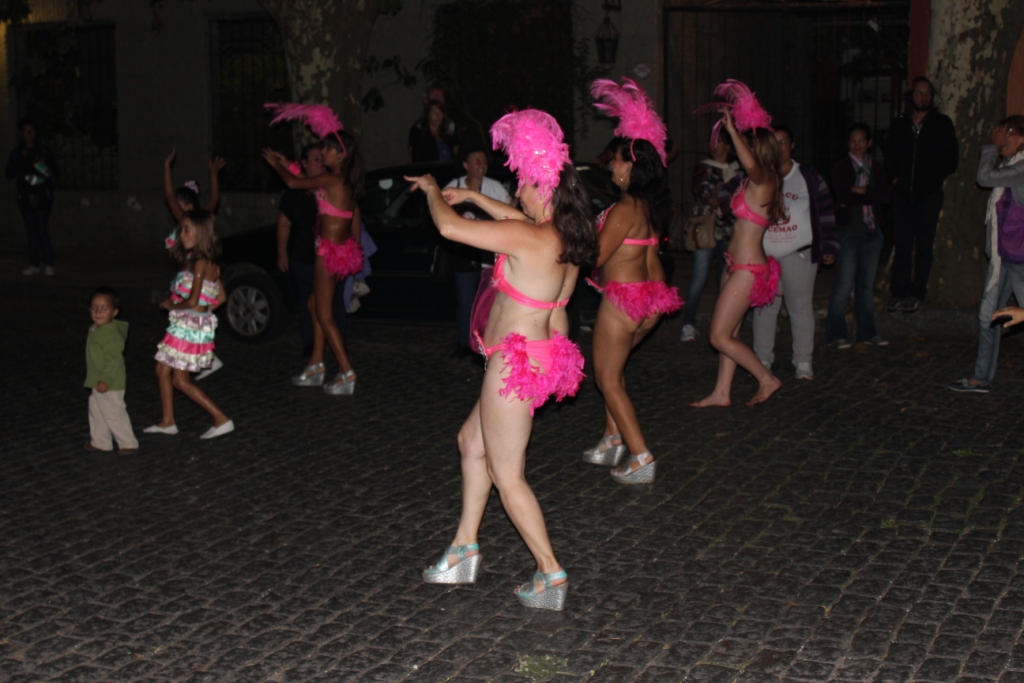 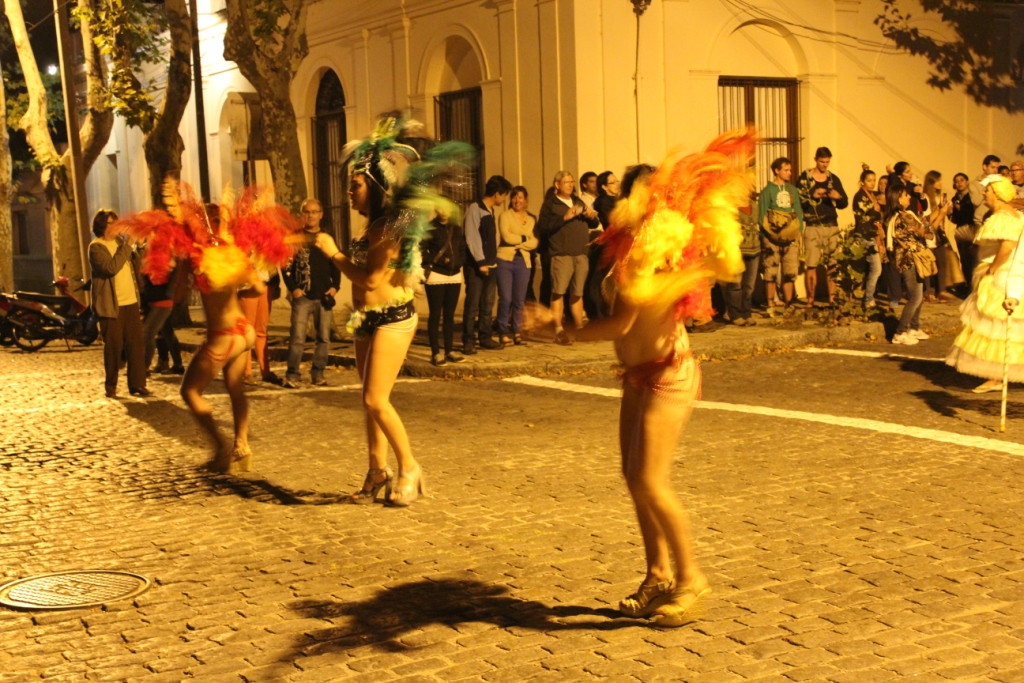 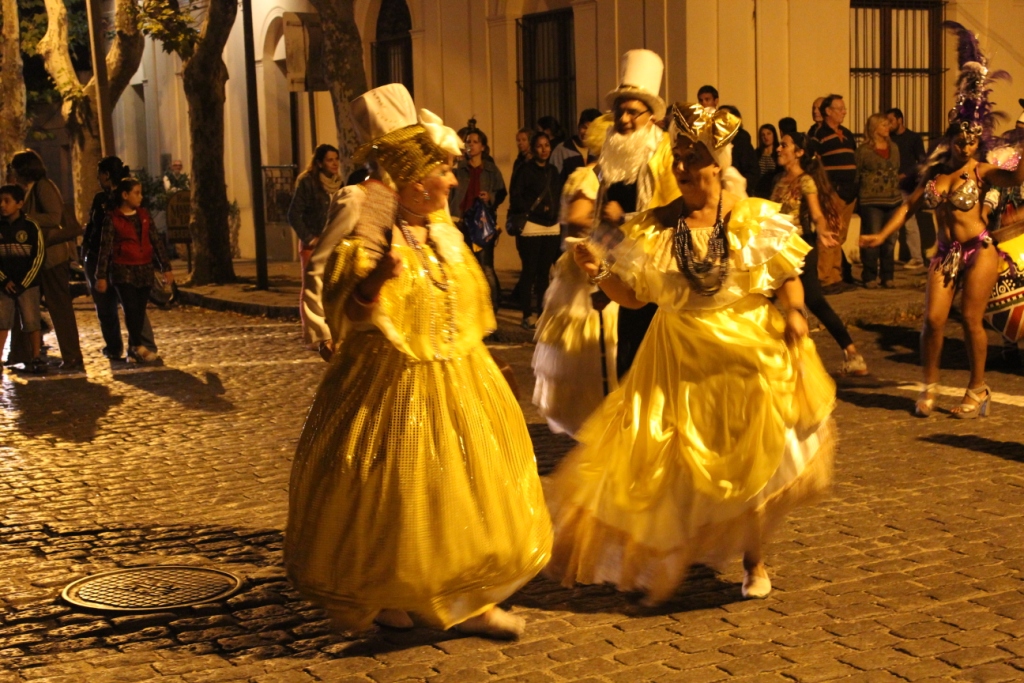 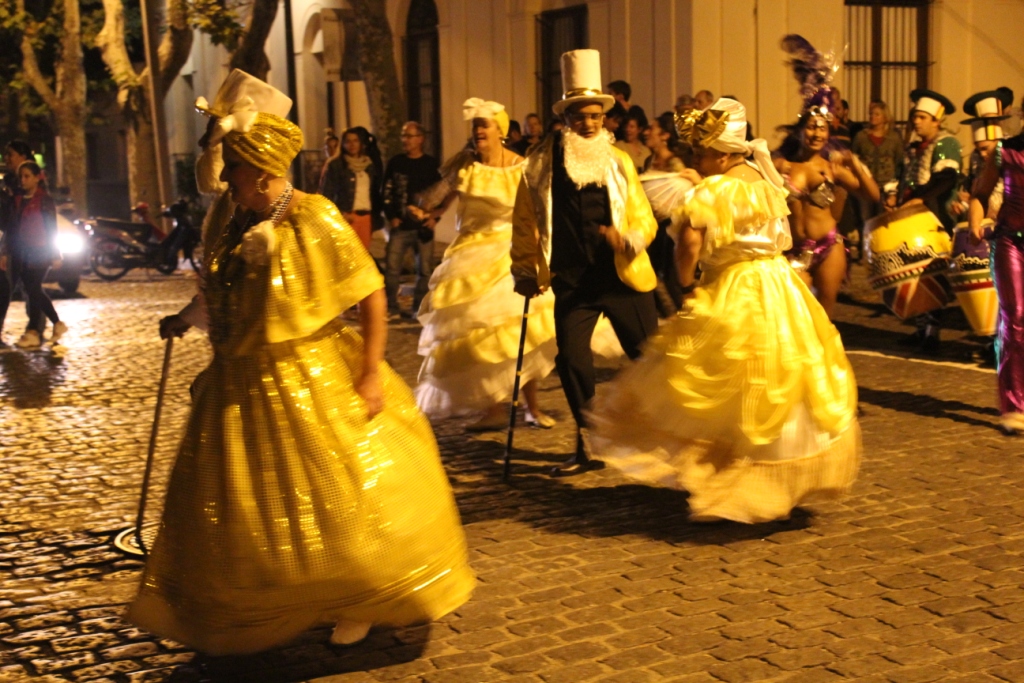 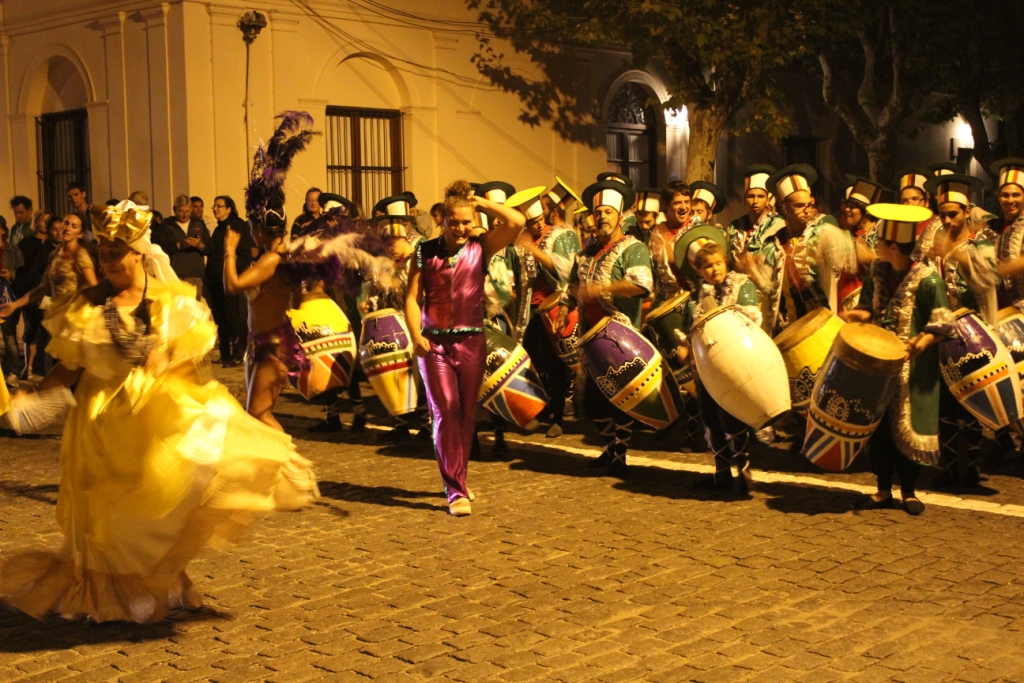 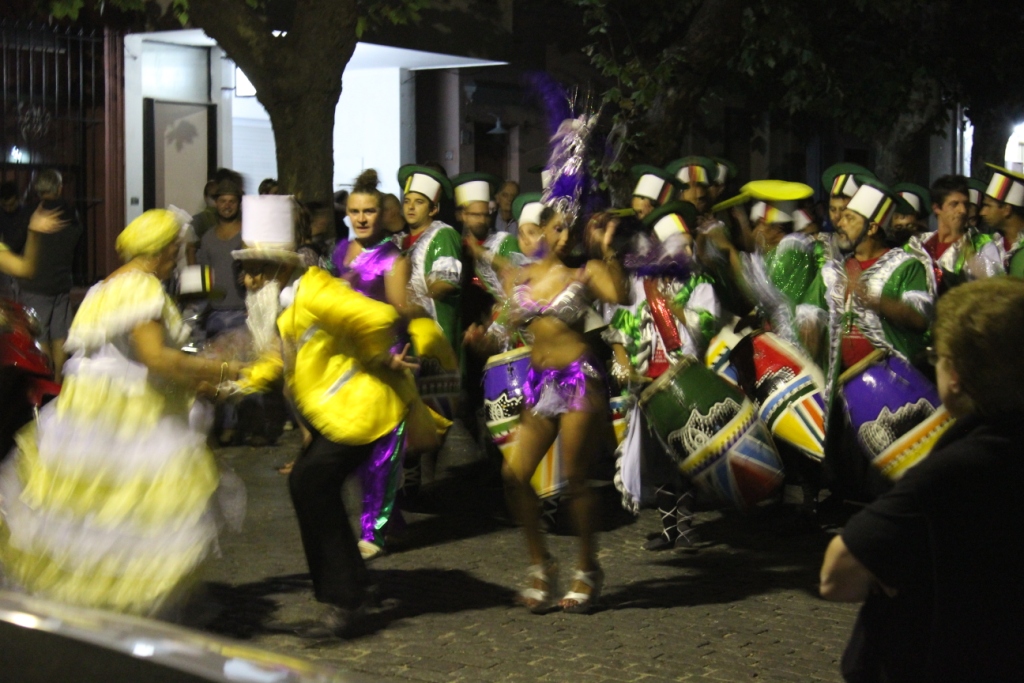 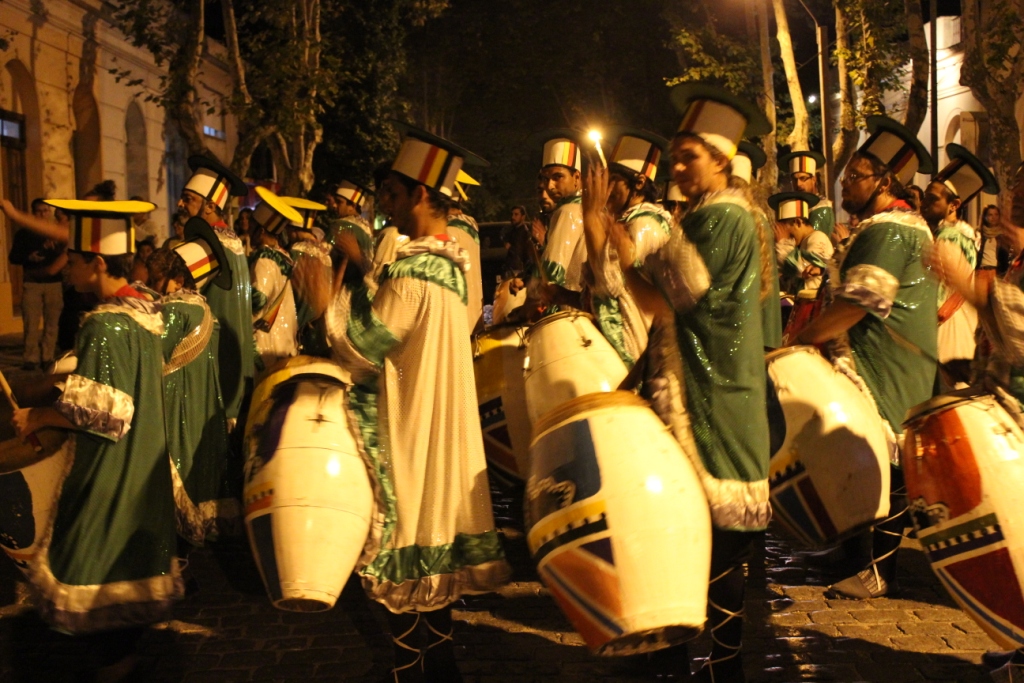