January 3rd, 2013 | Posted by Ian and Brianna in Border Crossings | Dogs | Mexico | Speedbumps | United States
We cross borders by land in a CR-V with US passports and our two dogs. We do not carry drugs or weapons or disallowed fruit (usually). These articles are not a definitive guide to crossing borders nor should they be used as a sole source of information. They are our experiences.

What We Needed (or what we thought we needed):  Consistent and consolidated information on what we needed was hardly well organized by the Mexican authorities, but by piecing together information from a few different sites (including Drive the Americas) we gathered that Americans crossing from the US to Mexico in a vehicle with dogs require

The Process:  I-5 south from San Diego leads directly to Mexico. After passing multiple signs for the last highway exit, the road leads straight into the border facilities and cars are ushered into parking spots for review. Once waved on, travelers should find the Immigration office to get passports stamped and tourist cards purchased. We’d love to tell you how to get to the Immigration office*, but as we share in our experience below, we never saw it. Being waved on, little direction was given to guide drivers out of the border area. Soon the main roadway produced signage that spat us out onto Mexico Highway 1.

Costs:  Tourist Cards cost approximately $22USD per person and should be purchased at the Immigration office. Tourist Cards are needed by visitors leaving the tourist zone, which, though varying by state, generally includes only the first 12-18 miles along the border. The Temporary Vehicle Import Permit can be purchased at Banjercito, supposedly next to the Immigration office*, and costs about $45USD and also requires a credit card for a deposit. The price of the deposit depends on the year of the car and is usually between$200 and $400USD. The deposit is returned (or unheld?) upon departure from the country.

Dogs:  At a military checkpoint many hours south we were told we should change Olmec’s name to Saul (why didn’t we think of that?), but no attention was paid to the dogs at the border.

Our Experience:  Upon parking our car, a Mexican Border Patrol Officer asked us to open our hood and tailgate (finally someone who wanted a peek under the tarp!). He spent about 10 seconds looking at each area and then waved us on. We pulled forward a few cars length, waiting for someone to tell us where to head, and when no one did, we followed the car next to us in the direction of what appeared to be the place we were supposed to go next. As we rounded the bend, we quickly realized that rather than “the next step”, we were instead set free in Tijuana. Not about to exit the highway there though, we cruised on, leaving our problem to be solved another day (and most likely with a fine, but what the hell Mexico? Why must you hide your Immigration office?)*.

After some research we’ve found that our best bet for rectifying our whole tourist cards and passport stamps oversight is going to be to head to the Immigration office in La Paz, where we’ll be catching a ferry to the mainland at the end of the month. The passport stamp is apparently a non-issue because no one is going to check our passports if we have a tourist card. We may have to beg or cry or lie or (more than likely) pay a fine, but they should be able to give us tourist cards there, and we’ll be on our merry way*.

*IMPORTANT UPDATE: Please check out our posts about our visit to the Immigration office in La Paz and our subsequent trip back to the border after learning that as of November 2012, they no longer issue tourist cards there (even with a fine). Having revisited the border, what we can tell you is that the Immigration office is to the right of the far right lane as you’re entering customs, that the auto import permit can only be purchased 25 miles away in Otay, and that even after having completed the process, we still don’t know how we were supposed to have found them. We recommend asking the first person who stops you. We’ve also put the Otay Banjercito on our route in case that might be helpful to someone. 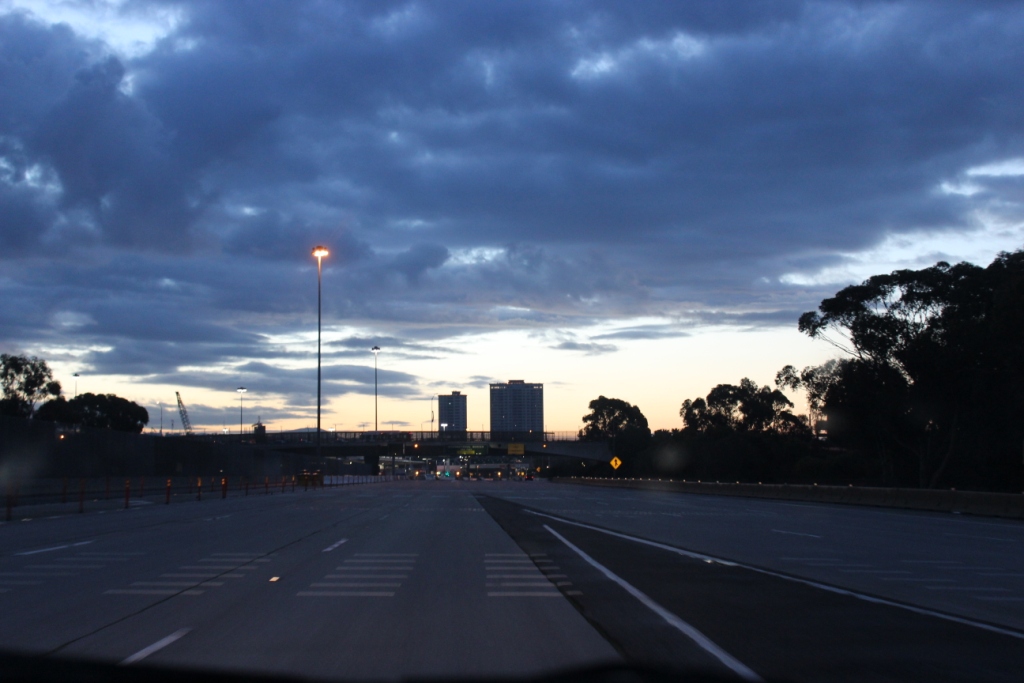 Approaching the border at dawn from San Ysidro, CA on I-5 just past the last exit. 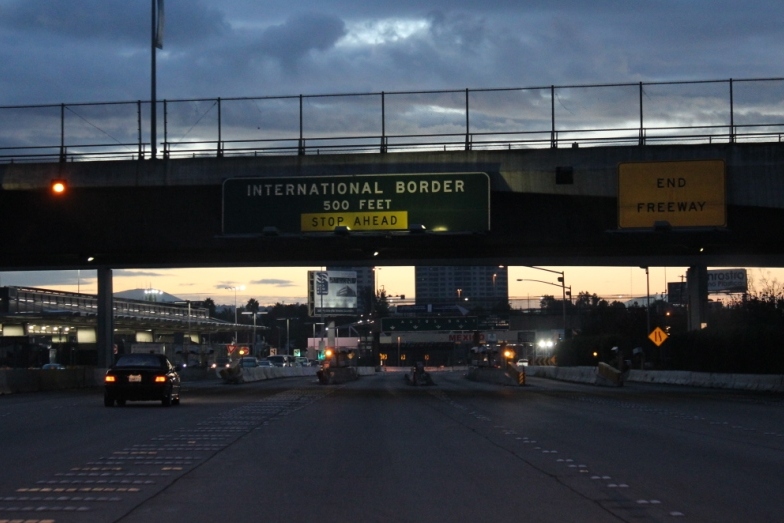 Entering the border area at the end of I-5. 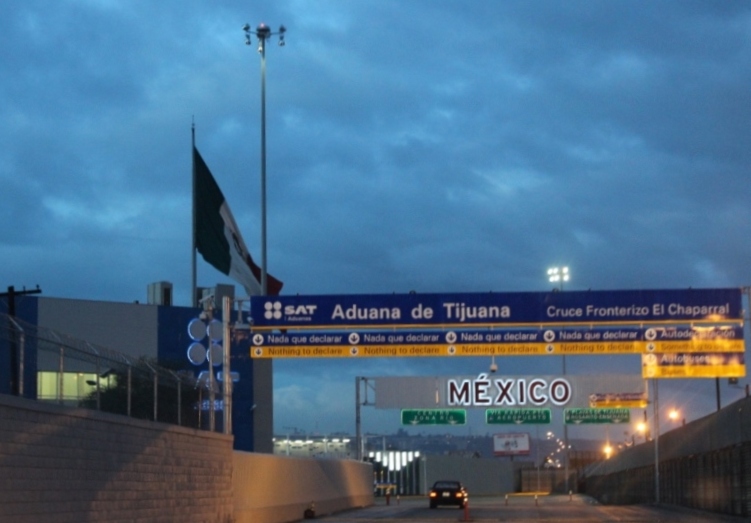 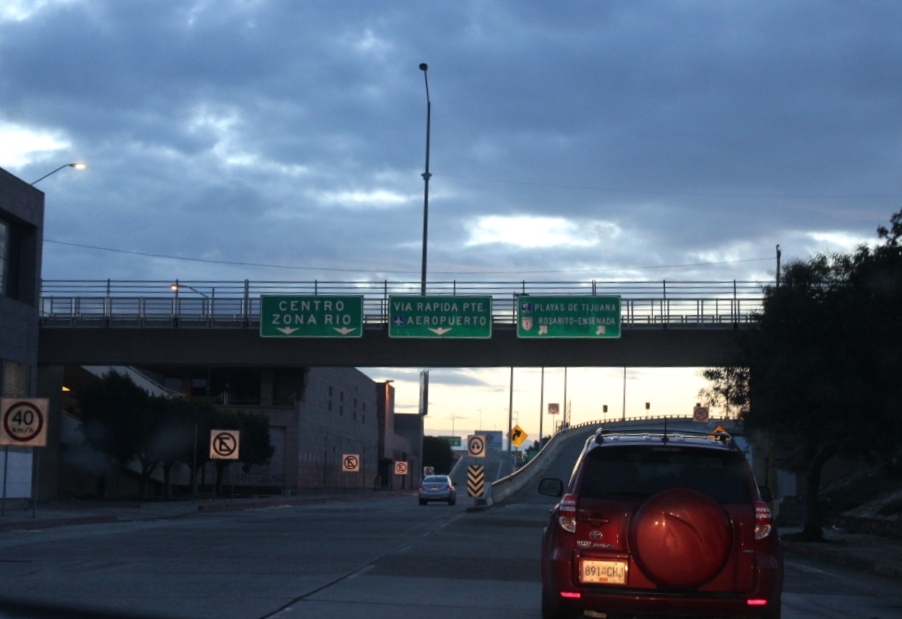 Exiting the border crossing area and driving into Tijuana. We exited to the right towards Ensenada.