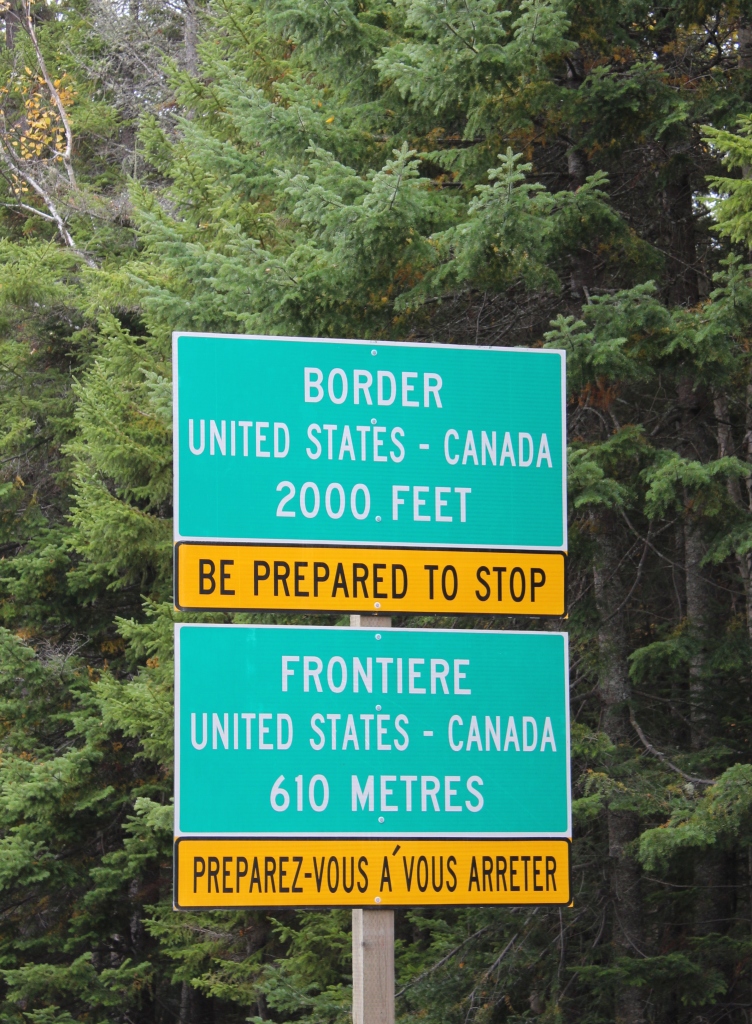 When, Where, and Which Direction:

What We Needed (or what we thought we needed):  Per the Canada Welcomes You website, Americans crossing from the US to Canada in a vehicle with dogs require

The Process:  On both sides of the border, roads were well marked with directional signage and clear lanes. Except Coburn Gore, Maine, where the entirety of the operation was based in a single, small building, most of the setups looked very similar to toll booths on a turnpike (see photos below). At all locations, drivers were funneled into lanes where they waited their turn to pull up to the station and meet the Border Patrol Officer. Once the officer was satisfied with his/her review of the travelers’ documents and the travelers’ answers to his/her questions, passports were returned (unstamped for Americans), and the car was free to drive into and throughout the country.

Costs:  None for Americans, but there is a $3.25 toll required to cross the bridge at Sarnia before reaching the official border heading towards Port Huron.

Dogs:  If you’ve read our earlier posts on Maya, you know that borders were one of our main concerns. While it’s hardly fair to say we’re in the clear after these incredibly simple crossings made without exiting the car or involving armed men approaching the vehicle, we would by lying if we said there wasn’t some sense of relief achieved with our successful trips into and out of Canada. In addition to Maya’s Sit Means Sit training, we also now have peanut butter to thank. Maya loves everything about peanut butter and in our most effective dog-parenting crutch to date, we resort to bribing her with mostly empty jars when she needs to be distracted. It’s fabulous really. The poor things stares longingly at the jar in the front seat the entire time we wait in line to cross the border, but she does not get to clutch it in her grasping paws or cram her snout into its mouth until we are given the green light to meet the officer. Believe it or not, Olmec was the more attention-drawing of the two pups. He really wanted to be friends with the Border Patrol Officers – none of which asked for their vaccinations or rabies certificates and only two of which even acknowledged that we were traveling with canines.

Our Experience:  After months of what we thought were thorough preparations, we found ourselves, just days before heading into Canada, with lapsed vehicle registration, without our proof of insurance, and in possession of only unsigned veterinary documentation. Not a great start, Kietzmans. A little bit of scrambling (thanks, Moms!) and a little bit of letting go had us as prepared as we needed to be as the only documentation we were asked for in four total crossings were our passports.

For the most part, our crossings were uneventful and generally consisted of some condescending questions about why we would ever even think to travel to wherever it was we were going and then distrustful glances paired with long pauses following our far too inconspicuous answers. “Oh, just visiting? Right…” In all fairness, our answer to “Where is home?” didn’t really make things easy for the interrogators, but that only actually came up once. You know what we thought was crazy? No one asked what was under the giant tarp in the back of our CR-V. I mean, all you can really see in our vehicle are two humans, two dogs, some essentials in the front seat, and then this giant mass covered by a tarp and then wrapped up in and secured by a net that takes up a good third of the cabin. Wouldn’t that be your first question if you were searching for something slightly amiss or trying to catch us off guard? “What are you transporting?” Not that we’re complaining. We were very happy with our smooth sailing border experiences. Just that being an asshole didn’t seem to cover the security measures we were expecting.

Coburn Gore / Woburn Border Crossing - On Canadian side, looking back after having crossed 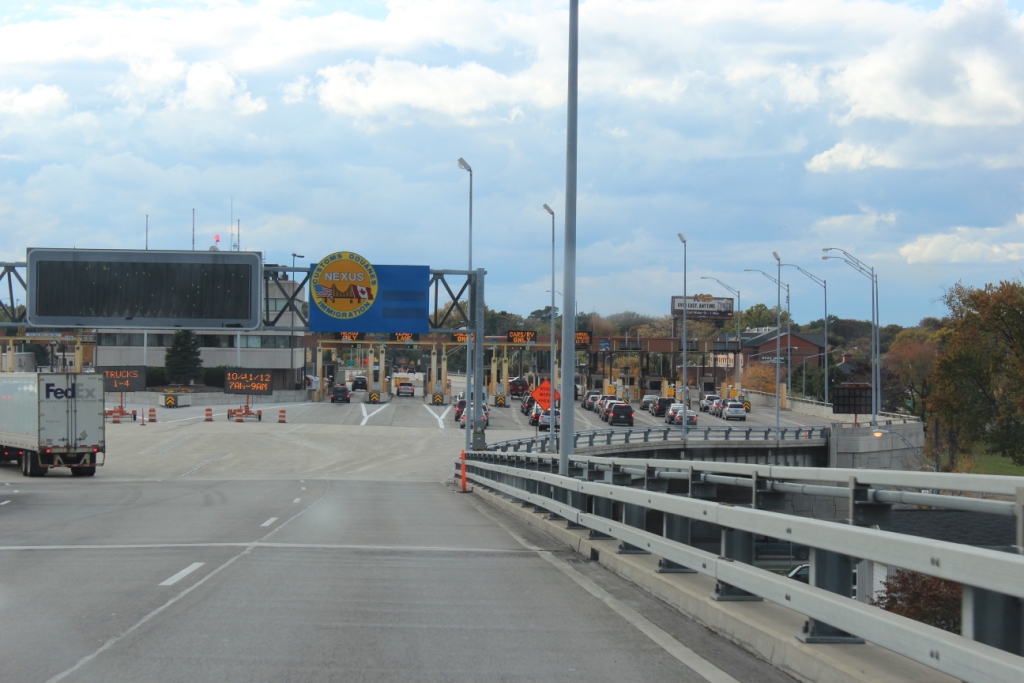 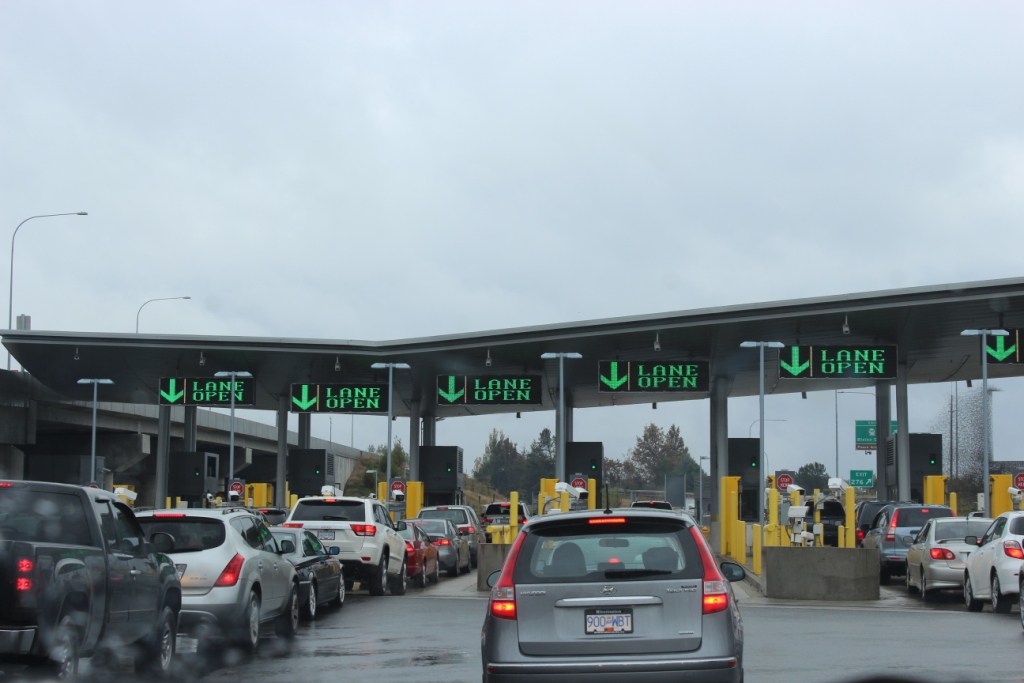