When, Where, and Which Direction: April 11, 2014 – Rivera, Rivera, Uruguay > Santana do Livramento, Río Grande do Sul, Brazil 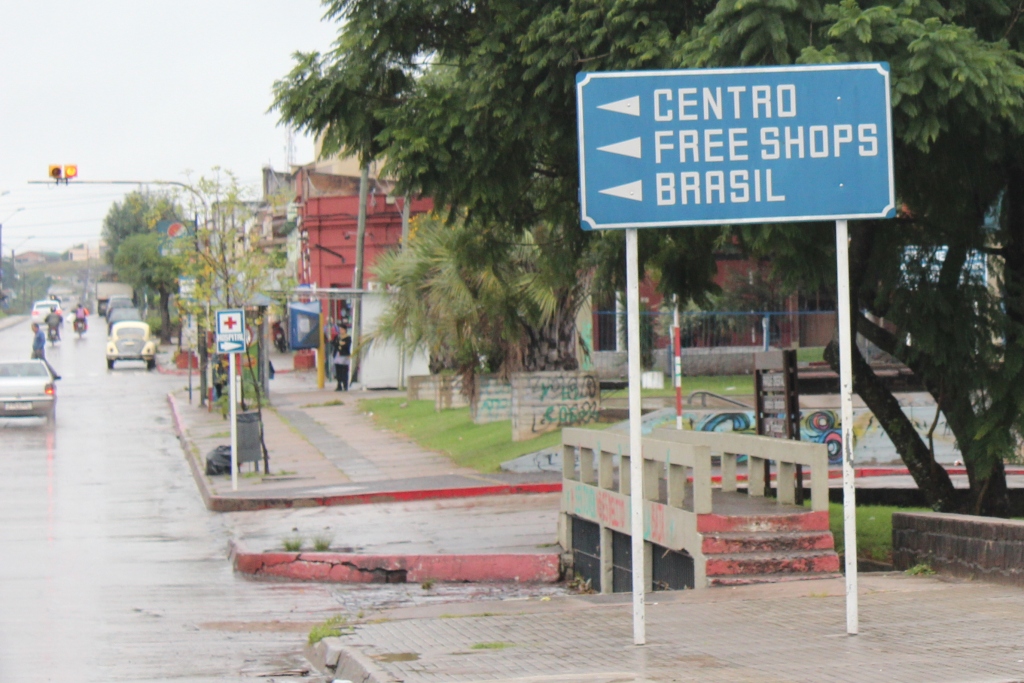 Rivera and Santana do Livramento are separate cities in different countries that mesh together to form a single urban area or international city. A big boulevard runs along the official border with the eastbound lane in Uruguay and the westbound lane in Brazil. Traffic, both foot and vehicle, can pass freely from one side to the other. The street grids, languages, currency, and vibe differ between Rivera and Santana do Livramento, but otherwise there are no physical or human barriers between the two. Because of this, there is also not a single border area or point at which one must cross. Instead, vehicles go through a checkpoint when leaving either city, and the individual is responsible for having taken care of their paperwork prior.

To officially depart Uruguay, visit the migración and aduana office on President Feliciano Viera between Agraciada and Sarandí (photos and map below). Migración is on the right upon entering. Clarify which direction you are traveling, collect your exit stamp, and then proceed to the desk across from it (on the left upon entering) to hand over your temporary vehicle import permit. The agent may confirm where you entered the country, but will likely just send you on your way. 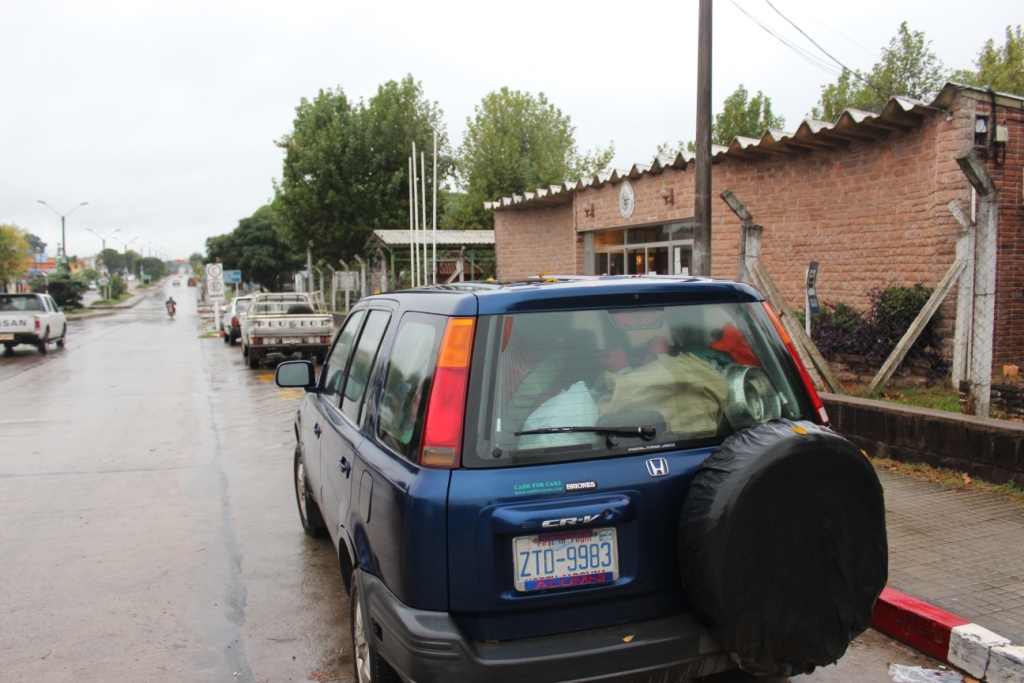 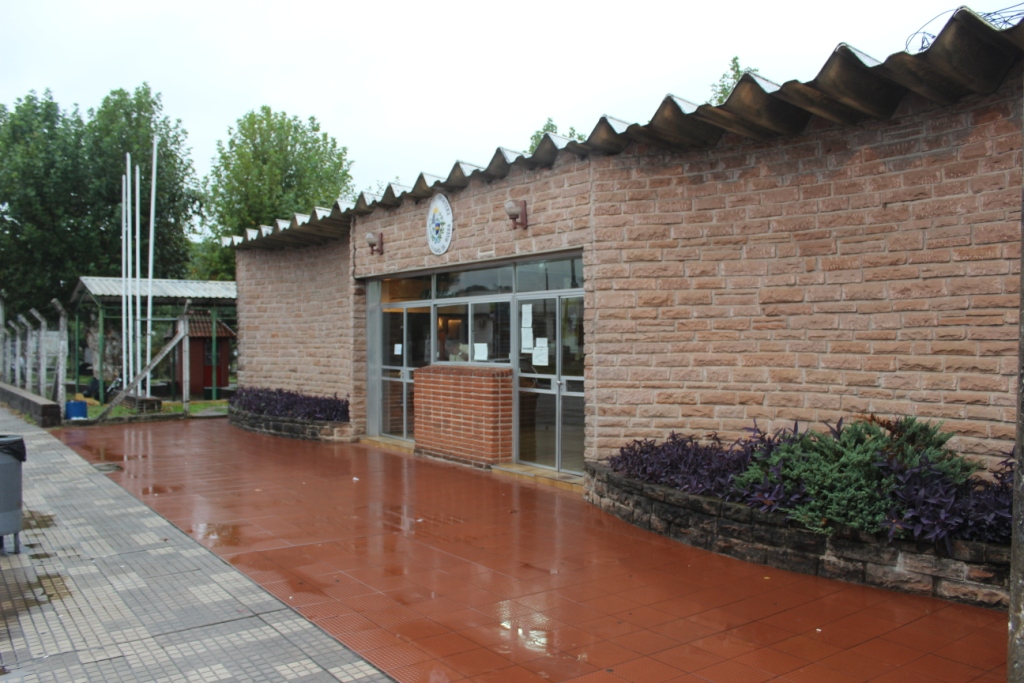 To officially enter Brazil, visit the police station at Rua Silveira Martins 1253 between Rua Thomaz Albornoz and Rua Antônio Fernandes da Cunha (photo and map below). Individuals carrying a US passport must have acquired a visa for travel to Brazil prior to attempting to cross the border. The tourist police window is on the left upon entering the front door. Hand over your passport and be prepared to communicate in Portuguese, even if just a few basic words. The officer will check your passport for a visa and then hand you a small form to complete. Return with the form to the window to get your entrance stamp. You will also keep the form as your tourist card. 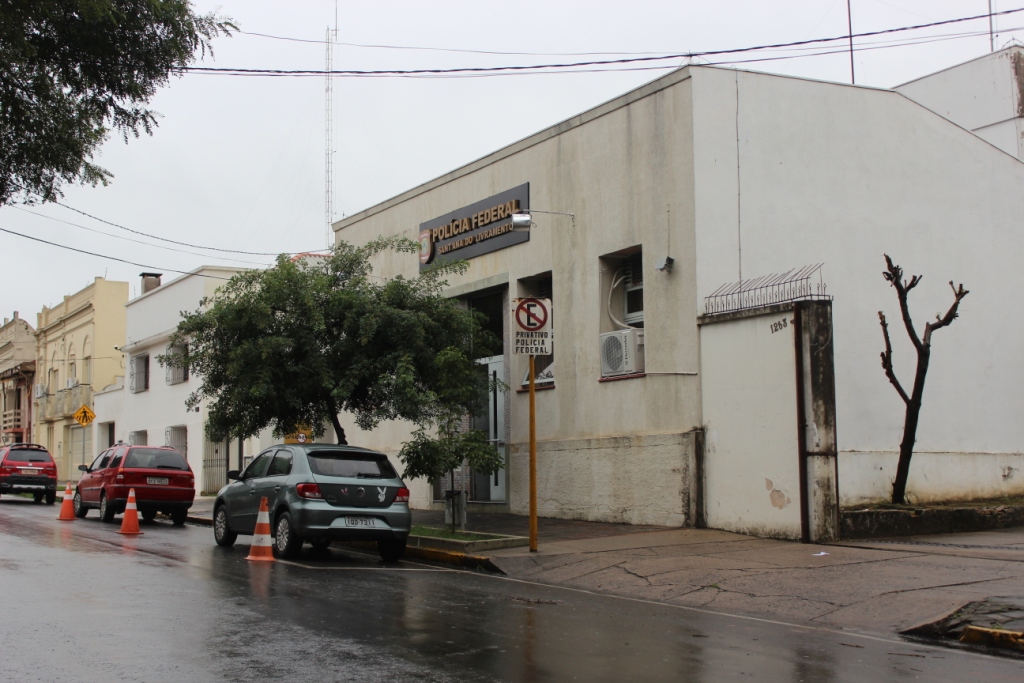 Brazil Migración at the Tourist Police - Click to Enlarge

This was the end of the necessary entrance process for us as nothing was needed for our vehicle. For details on this, see Our Experience below.

As noted above, tourist visas for US citizens must be taken care of before attempting to cross the border. We applied for, paid for, and received ours in Buenos Aires for 1768 Argentine pesos. Read about the process and details specific to getting the visa in Buenos Aires here and about the blue dolar market here to better understand real cost.

Because our vehicle was never checked, the dogs went unnoticed until we were exiting Santana do Livramento heading north. The agent there looked in at them and moved on immediately, never saying a word about them. We were unsure what to expect, and had only our basic forms with us, none of which we were asked for. We did not seek any official permits.

We pulled into town after dark on a Thursday, having hoped to camp that evening but changing the plan after finding everything seemingly permanently wet as a result of flooded rivers in the region. Before long, we were driving in Brazil and realizing just how openly traffic could travel between the two cities. Having agreed that we just wanted one last night in a Spanish-speaking country, we headed back into Uruguay to find a hotel despite many more options on the Brazilian side. I was surprised to find myself so pensive to be leaving my second language, but truly I was.

The next morning, we headed to the Uruguayan migración and aduana office. Despite very little information online, there were a number of signs in town for migración, and the woman at the front desk of our hotel just a few blocks away was easily able to give us directions. We were under the impression that the office opened at 8, but when we arrived at 7:45, a few people were inside already and passport stamping was operating as usual. Early on Friday morning, things were quiet, we barely waited in line, and we were able to park easily out front. This may be a different experience at other times.

After officially departing Uruguay, we drove over to the Brazilian side of town and found our way to the Polícia Federal building. Ian had read about it online beforehand and the aduana agent in Uruguay had pointed us the same way. We parked easily on the street. Inside, the officers were very nice and patient with our newness to their language (though Ian has been studying and can communicate impressively already). When we asked about an auto import permit before leaving, the officer pointed us to a third building back closer to the official border.

At this building (map below), we were directed by a  nice man as to which spaces were okay for parking and we ended up around the corner and down half a block on Avenida Tamandaré before we found an open one. On our way back, he kindly pointed us to the door that we were looking for as well (it’s the side one that says ‘entrada’). Ian opened the door and asked the security guard inside for customs (in Portuguese, alfândega). The security guard smiled largely and without a word led us to a large room at the front of the building with lots of desks and a group of employees chit chatting and drinking mate around one of them in a corner. Inglês! he announced proudly. How did he know?! we thought. He left us, and we approached the smiling faces, offering Portuguese or Spanish instead of English. Ian jumped in in Portuguese and was doing a fabulous job (even getting a good laugh when asking the main agent helping us to speak a bit more slowly) when around the corner came one of the staff members and a new guy, their resident English speaker. He was around our age and very kind, later explaining that he learned English while studying in Russia. Ian explained again that we were entering Brazil from Uruguay with a vehicle and were just looking to get a temporary auto import permit. When the translator said this to the group, they all nodded as if he were just confirming what Ian had already told them. Do you have the papers? they asked us. I responded yes and started to pull out our title and registration, but they weren’t really interested in seeing them and waved me off. The main guy got on his cell phone while the rest of us, almost a dozen, stood and waited. At this point, Ian and I started to realize that perhaps this office wasn’t technically yet open. No one had told us that, but it felt like everyone was just shooting the shit before work started, gathered around the biggest desk, catching up, and we were an odd novelty to get the morning going. The faces smiled at us, calm and entertained. After a very short conversation, the guy at the desk hung up his phone and rattled something off dismissively to our translator, who turned to us.

Okay, you can just go. You don’t need anything.

And then, as if a second thought in our shocked silence, he asked, Do you have your insurance papers? You’ll probably want to have those on hand in case anyone asks to see them.

We told him that we had them on a flash drive and offered to show him. No one at that office needed to see or approve them, but – and here’s where our minds were really blown – we were more than welcome to print our papers on one of their printers if we wanted to before we hit the road. When we did so and accidentally printed two copies, our translator smiled largely and proclaimed, Now you have one for each of you!

We left in shock. That was it? Just come on in? When we crossed from Ecuador to Peru, we were told to drive miles back into a country that we had legally left in order to get a photo copy of the stamp that said we were officially in a different country. That had become the norm. And now, here in Brazil, we were graciously offered kindness, support, open passage for our dogs and CR-Van, and free printing! Not a bad start, Brazil. Not a bad start.

We were flying high as we cruised away from Santana do Livramento, and our stomachs dropped when we saw the check point on the way out of town. We just knew they were going to ask for papers we didn’t have or grill us about the dogs. Instead, the agent circled the car a time or two, conversed with Ian in Portuguese and me in Spanish, peaked in at the dogs, and then asked us if we knew the way or if we needed any help with directions.

We’re still not sure if this was a typical or atypical crossing. Our friends at Lost World Expedition had given us the inkling that it might be this way and that we may not need to import our vehicle, but it was still a very pleasant surprise for what is likely to be our last overland border of this journey.

Where Went Went to Ask About Import Permits - Click to Enlarge - Note: Google Maps offers street view of this building (which we forgot to photograph), but it now looks different, revamped, and blue.