May 12th, 2013 | Posted by Brianna in Border Crossings | Dogs | Guatemala | Mexico
We cross borders by land in a CR-V with US passports and our two dogs. We do not carry drugs or weapons or disallowed fruit (usually). These articles are not a definitive guide to crossing borders nor should they be used as a sole source of information. They are our experiences.

When, Where, and Which Direction: May 1, 2013 – Ciudad Cuauhtémoc, Chiapas, Mexico > Santo Domingo, Huehuetenango, Guatemala

What We Needed: There wasn’t much information available about what we would need to cross the border, or maybe we just didn’t look that hard. Regardless, we went into the day with the same paperwork we’d had available when we crossed into Mexico from the United States expecting from our basic research only to need a cancelled auto import permit from Mexico and our passports. What we would end up actually kind of needing were:

The Process: Almost immediately upon entering Cuauhtémoc heading south on 190, there is a decently marked building housing Banjercito on the left side of the road. As the Mexican auto import permit must be cancelled to collect the deposit and is also supposedly a requirement for getting an auto import permit for Guatemala, this Banjercito office is the first step to leaving Mexico. Just inside the door, travelers should present their auto import permit at the window on the left. The worker will probably come to your car to verify that it indeed matches that which was registered when entering the country. The deposit will be processed the next day and post back to the account it was charged to a few days later.

Stop two is at the building next door to Banjercito, the second building on the left from the road. Here, travelers must present their passports and tourist cards and pay a new fee (a sign in the office indicated that this was another November 2012 customs policy update) to receive an exit stamp in their book (not that anyone would notice if you didn’t get it…). Tourist cards are collected. Now you are free to get back on the road and drive to the end of Mexico.

This “end of the road” is a congested and messy place. What we assume to be the exact border between Mexico and Guatemala is marked with a narrow gate. Cones stop vehicles about two car lengths passed the gate on the Guatemalan side, where swarms of people filter about just feet away. At this first stop, vehicles are sprayed for bugs, a non-optional part of the process, by a non-uniformed employee whose office is in a small, single-room building on the right side of the road behind the crowd. Men with wads of cash approach new visitors offering to exchange money, which is a necessity if you don’t have any quetzales as this is the only currency accepted at the border, but the rates are usually pretty terrible and the chaos of it all only adds to the feeling of being taken advantage of. It is apparently at this first tiny office that dog permits are addressed, but as our experience below details, this is about all we know.

Once shooed away from this station, vehicles can be parked on the right side of the road just before the second gate, which looks like a horizontal pole blocking a railroad track. Travelers take their passports into a larger building on the right side just past the bug-spray-and-pet shack. Here, passports are processed and stamped by a uniformed customs official standing behind a counter. Next, travelers with a vehicle must check in at the window at the front of the third building on the right for an auto import permit. The vehicle title, the owner’s passport, and the cancelled Mexican auto import permit are all requested (though our cancellation was never looked at) so that the employee can process the temporary import, which is good for 90 days. The worker will probably come to the car to verify its VIN. He then sends the vehicle owner to a door next to the window (apparently a bank; we were not allowed inside) to pay the fee and then return to the the window with a confirmation of payment to receive the windshield sticker and permit. If traveling with pets, you may be asked to show your papers or permit here as well.

With a permit sticker in the windshield, the second gatekeeper will allow you to pass, and if you can get through the next mile of excruciatingly narrow and crowded streets without running anyone over, you’re free to enjoy Guatemala!

Costs: There is no cost to cancel a temporary auto import permit in Mexico, and in fact, money is returned to the driver from the deposit put down when entering; however, a sign in the office where exit stamps are received indicates a November 2012 policy change requiring a 295 peso fee ($23.60 USD) when leaving the country. This fee is only charged to tourists who spend more than 7 days in Mexico. Entering Guatemala costs nothing for US citizens, but there are charges for cars and pets. We were quoted at 18 quetzales ($2.30 USD) to have our car sprayed for bugs, and the auto import permit cost 160 quetzales ($20.50 USD). Though discussion about the dogs occurred, we do not know if there is typically a charge (official or otherwise) and if so, what amount it would be for.

Dogs: According to pettravel.com and a 2004 statement from the US Embassy in Guatemala, acquiring a permit prior to arrival is required in order to bring a dog into the country; however, we opted for the play-dumb-and-run system, which worked fine too (this time). The previous listed sources site a need for a rabies certificate that is older than 30 days but not more than 12 months and a vet signed certificate of health that is not more than 30 days old for each pet, both of which we carry with us (except that we have to occasionally update our dates). Both sites indicate that these forms need to be sent, possibly with a fee, to the Guatemalan consulate to receive a permit for travel. Given the time to do this, it sounds like a lovely idea to show up at the border with a permit in hand. As that process isn’t entirely conducive to our travel-style though, we planned to try to address it with an official at the border. Voila, the bug-sprayer asked almost immediately about our dogs’ papers. I agreed to show them and was prepared with our rabies certificates, the certificates of health, and a bit of cash (though that’s probably not what he meant); however, the chaos of the area gave us an open window to hit the road, so we went with it. I can’t imagine that will work every time, but we were happy to get lucky at this stop.

Our Experience: After the debacle of getting our temporary auto import permit for Mexico, Ian’s credit card information was stolen by, ahem, from Banjercito, the national bank, to buy someone some snacks and jewelry in Tijuana. After cancelling the card, I emailed Banjercito to find out how to get our deposit back now that the card they had on file to return it to was no longer valid, and an employee responded to me in English telling me that we could just take care of it at the border when we were leaving. We didn’t head into the day with much faith in our chances, but were pleasantly surprised by a meticulous and unhurried attendant who filled in four blanks on a form letter that allowed us to apply the deposit to a different card at a pace that would make a snail look like a cheetah. Then, in a strange turn of events, he picked up a blank piece of copy paper from the copy machine and requested that Ian hand write a duplicate of the letter. While scrupulously checking Ian’s work about five minutes later, the employee found that two characters had been transposed in the text. Perhaps we could initial a correction? Of course not. As if trying to demonstrate the deplorable level of efficiency we’ve come to expect, Ian was told to rewrite the entire letter by hand a second time. Did I mention the office had a copy machine? With laughter, we completed the process and thanked the detailed man genuinely for helping us to solve our problem (and later also for not stealing our credit card information).

In the customs office, we were unaware of the new fee and tried to explain to the official that we had already paid for our tourist cards. She kindly pointed us in the direction of a posted notice that, even if fake, couldn’t really be argued with. Plus, she was really nice. So we forked over the fee, received improper change in our favor, and collected our passport stamps. As we walked out we mused that we probably didn’t really need the stamps to leave as the office wasn’t even within sight of the border and no other Mexican officials checked on us or our car.

But for all of the lack of enthusiasm on the Mexico side, we were thrust into mayhem on the Guatemalan side. As can be decently deduced from the above information on the process and the dogs, things around us were chaotic and way up in our personal space. Drive here, stop here, exchangemoneyexchangemoneyexchangemoney, I’m going to spray your car, 18 quetzales, move your car, you can’t drive this far, park over there, why, where the f is the guy I’m supposed to pay for bug spray, no I don’t want to give you money, get passports stamped, bug-spray guy is whistling at us, where are your dog papers, in our car I’ll go get them, car needs a permit, we need more money, where are your dog papers, right here, go to that door to pay someone, here’s your permit, go ahead and leave, we can go, yes you can go. Drive, Ian, drive! Just fucking go! 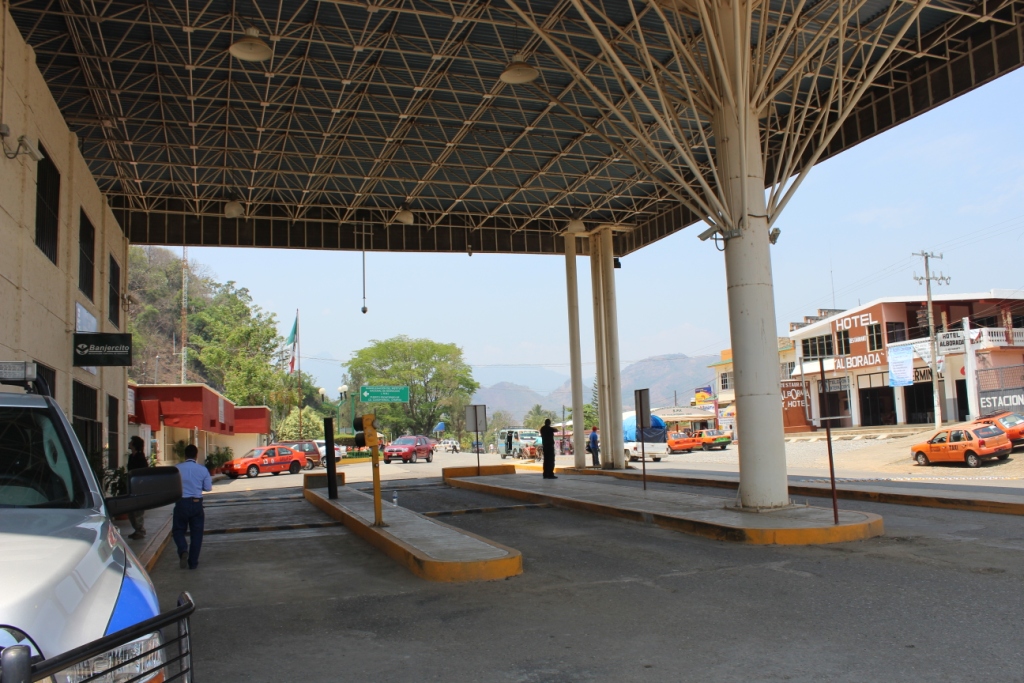 Cuauhtémoc Banjercito on the left side of Mexico 190. Our car is parked to the left. The building with the red cap and an orange car parked in front is where passports are stamped. 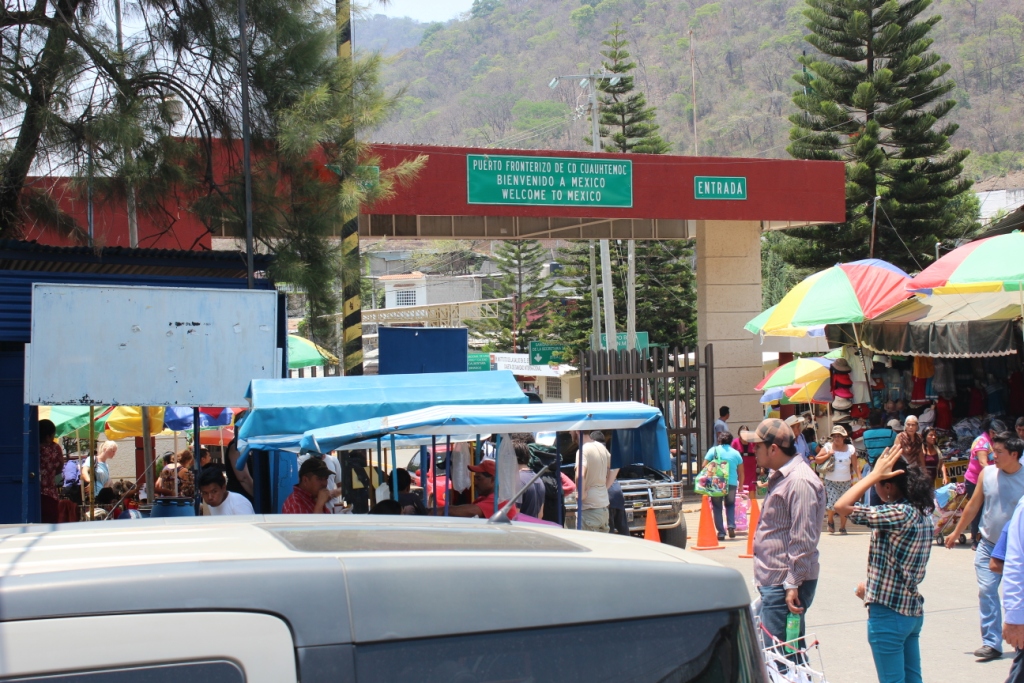 Looking back towards the gate on the Mexico/Guatemla border at Cuauhtémoc from inside Guatemala. A truck is stopped at the cones to be sprayed for bugs, and a red car is waiting behind it just inside the gate. Photo taken from in front of the passport stamp building. Payments for bug spray and possibly pets are made at the blue structure on the left side of the picture.