When, Where, and Which Direction: December 27, 2013 – Villazón, Potosí, Bolivia > La Quiaca, Jujuy, Argentina

The Process: Approaching the border from town can be a bit chaotic depending on construction. Locals were kind and willing to point us in the right direction. The border itself sits on a river. Park on the bridge. You will pass a building on the left that says migración and another on the right that says aduana – these are apparently only for those entering Bolivia, so just cruise on by. On the far side of the bridge, the road is well monitored by officials and the operations seem maybe a tiny bit more intuitive than previous crossings. On the right side of the road is a single building housing migración for both exiting Bolivia and entering Argentina. There are two separate windows and two separate desperately slow lines for the stamp out and the stamp in. The line for the stamp out of Bolivia is on the far right; look for the number 4 sign and then ask everyone standing there which line you need to be in. They will appreciate the break from waiting and opportunity to say something useful. At this point, you will probably be thinking that the line doesn’t look that long and that you got lucky, but you will be wrong and you will stand here for hours. Be positive about it. Life is good.

Alright, when you reach the window for your Bolivian exit stamp, hand the official your passport and tourist card. Most of the people in the line had an additional form that they had collected from nearby agents and were also asked for Bs. 15 ($2.20 USD); they were carrying ID cards, and passport carriers do not need the form nor should they have to pay the fee. After receiving your exit stamp, proceed to the end of the next line. Do not be the person who just jumps windows. When you reach the entrance window a few hours later, hand the agent your passport, your printed confirmation of payment of the Argentine reciprocity fee required for US citizens, and the half page form that you filled out while waiting in line after a border agent walked by passing them out. He or she will put your information into a computer, stamp a few things, and then send you on your way.

Next, cross over to the left side of the road. The line of people on the far side of the building is for folks getting their exit stamps from Argentina. They will then go to the migración building we talked about earlier to stamp into Bolivia. On the front side of the building is a handful of offices. Near the middle is the door for Argentine aduana. Enter the office and let the official working there know that you are looking for a temporary vehicle import permit. They will request your title (and registration if your plates aren’t listed on your title), the driver’s passport, and proof of insurance (see “Our Experience” below) and then type up your permit. Before handing it over, you will need to pull up your vehicle for a search-like inspection. We read that these could be decently thorough, but ours was relatively brief. Just a quick poke around, a question or two about what was in our bags, and then a directive to move the car while we chatted about the dogs.

For the first time since Central America, we had to do the pet dance (despite at least a dozen dogs that we watched being carried across the border that day). It wasn’t so bad; for more details, read “Dogs” below. Essentially, you may need to work with an agriculture agent and pay a fee to bring the dogs in. Once you’ve appeased them though, you’re free to drive into Argentina!

Costs: US citizens are required to a pay $160 reciprocity fee to enter Argentina. It is not a Visa, but rather a fee assessed to match the one that the United States charges for Argentines to enter the country. It can be paid online ahead of time (and possibly also at the border, but I’m not familiar with that) and the printed confirmation is all that is necessary at the border. We also paid Bs. 168 ($24.35 USD) for permits for the dogs. There was not a cost for us to leave Bolivia nor for the temporary vehicle import permit going into Argentina.

Dogs: As mentioned above, we saw a lot of leashed dogs being taken across the border; however, when the officials noticed ours, we were directed to a Senasa agent for approval. The man asked for our papers, a copy of the owner’s passport, and to see the dogs. We agreed, provided him with the passport copy, vaccination records, a certificate of good health, and a Spanish copy of the certificate of good health, and when I mentioned that one of the dogs would be wearing a muzzle because she was a perra brava (and there were a ton of people running around – it would have been a stressful situation for Maya), he said just to bring the other one. So Olmec and Ian and I followed the man to a first floor office on the back side of the Argentine aduana building. The gentleman then explained that we needed an international health certificate. I tried to convince him that our Spanish copy was an international certificate to which he responded that we needed both the form we had and a separate, different form, at which point we were pretty well convinced that he was full of it, because Ian had just created our Spanish copy in photoshop. We thanked him kindly for the explanation and asked him what we needed to do. The cost would be 42.8 Argentine pesos per dog, plus a 90 peso fee for having to get it done at the border. We asked if we could pay in Bolivianos, to which he agreed. Then he left to go get our documents. When he returned 45 minutes later, he produced Bolivian pet import papers with “Bolivia” covered up with black marker. He then got Ian’s signature and applied a handful of stamps before accepting our payment and sending us on our way. He never looked at Olmec.

Though we don’t think everyone is required to complete the process that we were, we weren’t too bothered by it. The agent was nice, and he put on quite the show, which was decently official looking compared to those of Central America. Additionally, we now have official papers for the dogs, which will be nice to have as we will be crossing into Argentina at least two more times (on our way to and from Ushuaia, as we’ll have to cross through Chile to get there) and potentially more depending on if we go back into Chile in the spring. These documents will make those crossings easier and less stressful from get-go.

Our Experience: Until this crossing, we’ve been able to find a decent amount of information about what to expect ahead of time. For most of our route, we have looked to PanAm Notes or Life Remotely (via BorderHelper.com – great resource!), and when we’ve taken a different path than they have, we haven’t had much trouble finding someone else who crossed where we did. For some reason though, we couldn’t find anyone who had taken a vehicle from Bolivia to Argentina, let alone at this spot, which is somewhat surprising after passing through and finding that it was pretty well-traveled. The majority of overlanders do Bolivia’s southwest circuit though and then head into Chile from there. We pieced together some information from those crossing into Argentina from Chile and assumed our practice over the last year would help us get it done. Indeed, it wasn’t so bad. We never know what to expect for the dogs anyway, so the vehicle was really the only part we were less informed about.

We tried to go to the migración and aduana offices on the Bolivian side of the bridge first. No one paid any attention to us, and when we asked, they kindly pointed us to the other side of the bridge, the migración gentleman telling me specifically to go to the number 4 sign. As mentioned above, we then proceeded to stand in line for passport stamps for 5 hours. Yes, five. At one point during that wait, I asked an official about cancelling our Bolivian import permit. He took me to a migración agent, where the permit was given an exit stamp as if it were a passport. I don’t imagine this is the correct way to do this, but it was easy and good enough for me!

We had read that auto insurance was required to import a vehicle to Argentina, but that it was likely not going to be available at the border and that purchasing online took a few weeks. A few weeks isn’t really a big deal unless you, like us, are making your preparations the day before you cross. Following the lead of a source we read online, Ian photoshopped our Mexican auto insurance to get us across the border, and we are now pursuing legitimate coverage. When the aduana agent asked to see our insurance, I provided him the paperwork, which he reviewed only briefly and then returned to me.

It might be worth exchanging a bit of money on the Bolivian side. We thought we’d exchange dollars for pesos once in Argentina, but couldn’t find anyone to do so and ended up having to withdraw money from an ATM (which is horribly terrible for both fees and exchange rate in Argentina; more on this later). Though it was easily our longest border crossing by double the hours as the second longest border crossing, it was relatively low stress. Lots of waiting, but not lots of worrying. 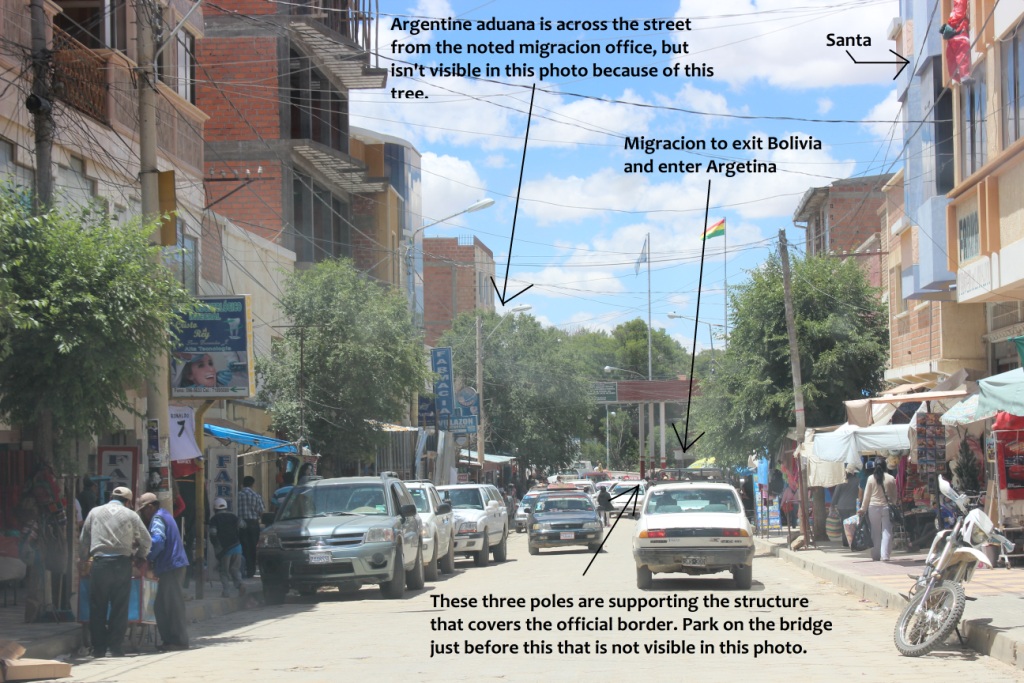 After six hours you'd think we'd have walked away with more than one bad photo... Villazón/La Quiaca Crossing as Viewed from Villazón