The border sits on the eastern (Uruguayan) shore of Río Uruguay which can be crossed via the Puente Libertador General San Martín (San Martín International Bridge). There is a toll to cross the bridge which is administered on the Uruguayan side and can be paid in Argentine pesos or Uruguayan pesos. After crossing the bridge and paying the toll, the road feeds directly into the border crossing station. Without exiting the vehicle, pull up to one of the open booths and hand over your passports. The agent(s) will process both the exit from Argentina and the entrance to Uruguay at a single window. Drivers may be asked to show their Argentine Auto Import Permit at this time.

Pull forward further under the awning and park. An agent will direct you into the building to take care of your vehicle paperwork and will assure you that your van is fine to stay where it is. Enter the only building (it is on the left and brown upon approach) and go to the counter with the sign above it for Argentine Aduana. It is in the middle. The agent will take your permit, smile, say ‘all good’, and point you to the next counter which is labeled for Uruguayan Aduana. Tell the agent at this counter that you need a temporary auto import permit and then wait while he gets out the proper notebook. Present your title, registration (if your plates aren’t listed on your title), and the owner’s passport. The agent will fill out a short form, ask for a signature, and then send you on your way with a carbon copy.

Back outside, hand the agent your new import permit. He will glance in the general direction of the document and then do a brief vehicle inspection. He, or another agent, will likely also ask for dog permit papers at this time and will take the duplicates, give the pups a once over, and then bid you a surprisingly warm welcome to the country.

We spent 1200 Argentine pesos ($120 USD for us at the time – read about the blue market to get an idea how much it can vary) for our dog permits the week before crossing (see below) and 70 Argentine pesos ($7 USD for us at the time) to cross the bridge. There was also one more toll in Uruguay before we got to an ATM, but they accepted both Argentine and Uruguayan pesos as well as US dollars, so we paid $3 USD there. There was a man at the border changing money, but you might have the ask the agent to point you in his direction if you were interested.

As with our crossings between Argentina and Chile, we opted to have legitimate papers for our dogs at this crossing. Most sources (for example, Canada, but not the United States) credit Uruguay with being a rabies free country, something we took to mean they weren’t going to look lightly upon a couple of canine visitors without papers. Also, there wasn’t a crazy wealth of information available about the crossing, leading us to accurately believe that it wasn’t a busy outpost with a bunch of plan Bs available if we hit a speedbump. So, we went back to the vet that we had visited before in Buenos Aires and went through the process again. We say it was worth it. Uruguay requires a certain brand of something, heart medicine or flea guard or similar, so we got that in addition to the repeat health check and certificate costs. Fortunately for us, our rabies papers were accepted despite our assuming that they were going to be denied for being more than 6 months old. We went to the vet on Wednesday morning, picked up our papers on Thursday evening, and crossed the border on Saturday. Great!

On the day of the crossing, the dogs hung out in their kennel, smiling prettily when the gentleman agent requested their papers and then came around to say a brief hello. Skipping the vet and paying bribes as we did in Central America was much cheaper, but border crossing days are so much more relaxing when we have the accurate paperwork, especially in these countries where sliding under the radar isn’t much of an option.

This was definitely one of the easier borders south of Canada. It took fewer than 30 minutes and included lots of pleasantries with little stress. We did have the option of taking a ferry from Buenos Aires to Colonia (they’re only 30 miles apart by water) instead of the 6-8 hour drive, but gas was cheaper than the ferry, we enjoy being on our own schedule, and, as a friend helpfully pointed out, when you add up the three hour ferry plus loading and unloading, getting there early, waiting at a busier border, etc, we didn’t expect to save that much time anyway.

Interesting note: For many recent years, the bridge at this border crossing was closed due to a dispute between the two countries over a new pulp mill being built on the Uruguayan side that Argentines claimed would pollute the shared river to which the Uruguayans said “no it won’t” in response to which a bunch of Argentines occupied the bridge in protest. For five years. Five. Years.

What do you think that was like for the guy who has been living at the bridge for five years? What is he doing now? 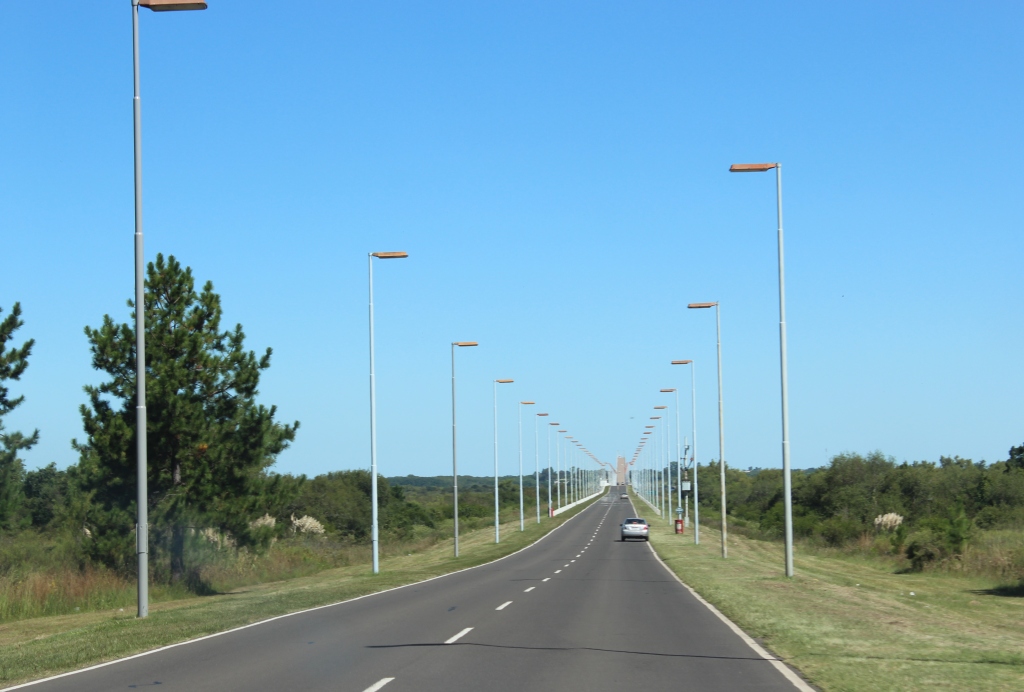 Approaching the Bridge from Argentina 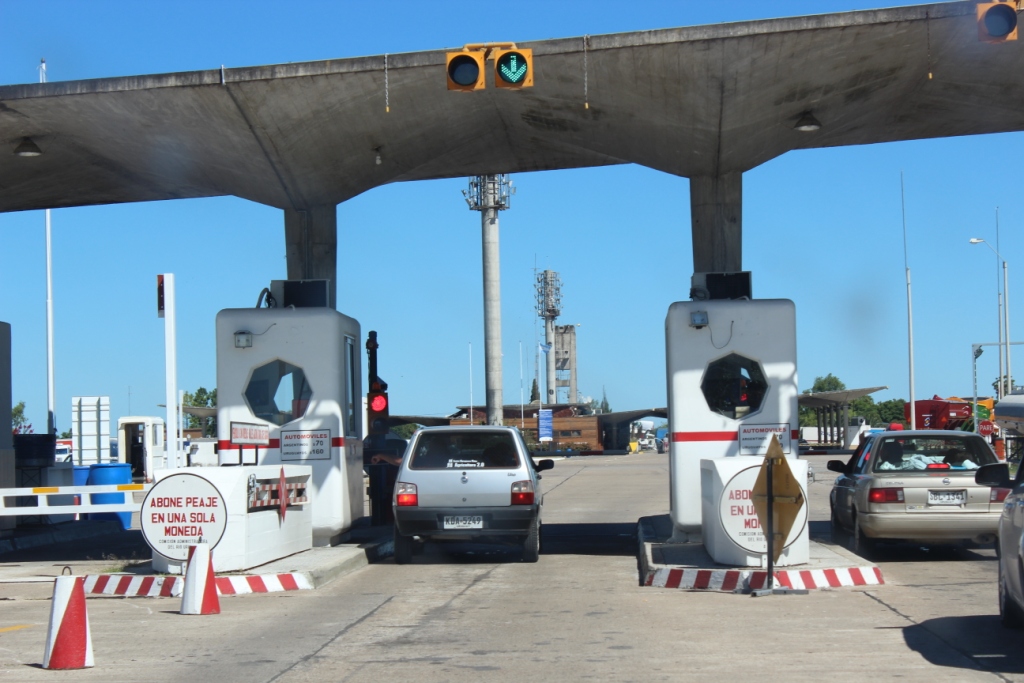 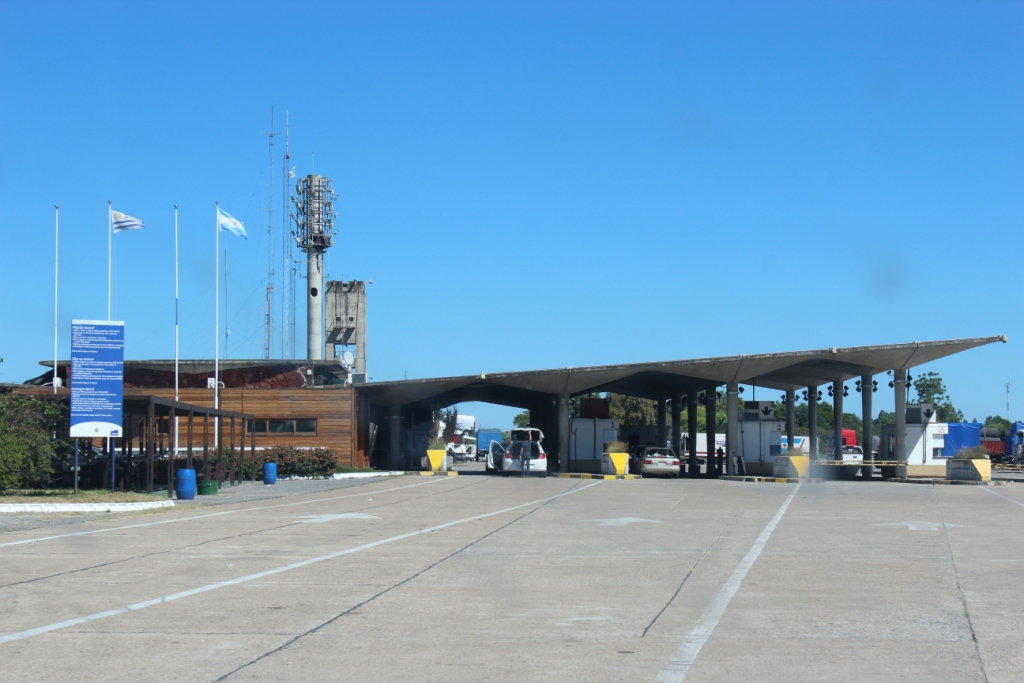 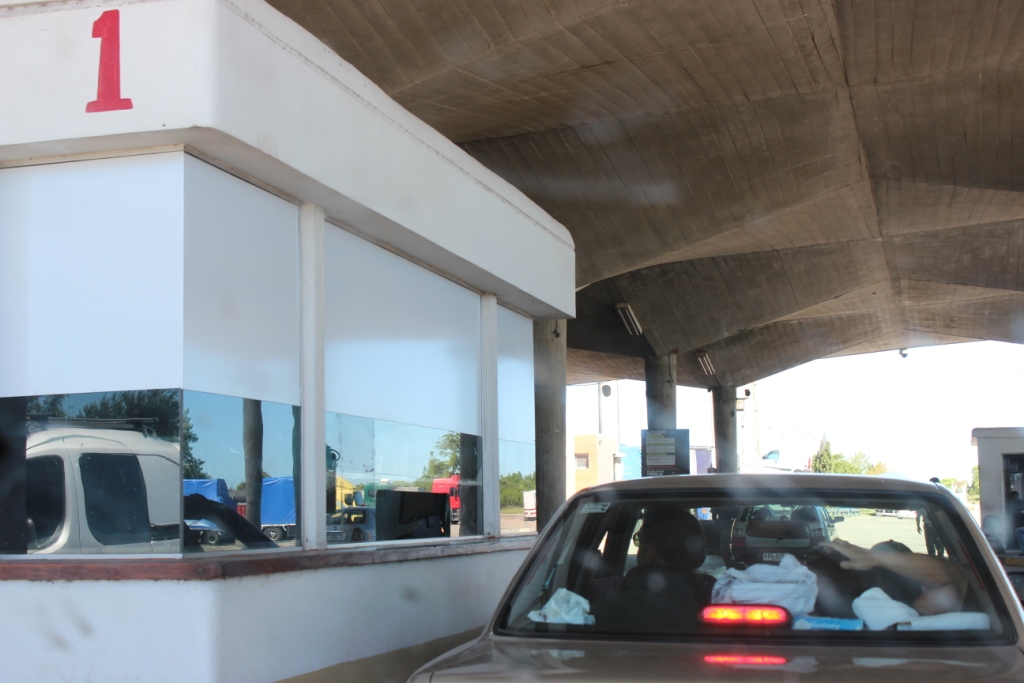 Get your passport stamped at this window then pull a small bit, still under the awning, and park.