An Exercise in Inefficiency: Navigating Madness to Get Some Pieces of Paper 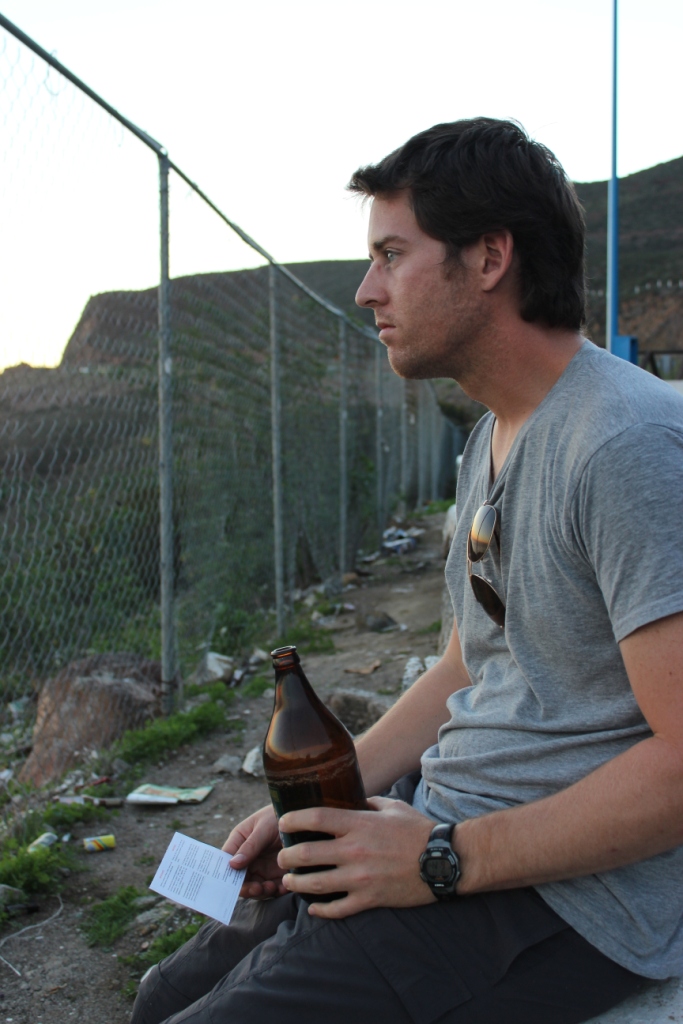 This pretty much sums up how Tijuana made me feel.

After the whole tourist card debacle we got ourselves into, last Thursday night we pulled into Ensenada after dark and found a nice little hotel on the south side of town. Though tourist cards are available in Ensenada with a small fine, we had made the decision during our drive to go all the way to Tijuana so we could go to Customs and get our temporary vehicle import permit out of the way at the same time. We awoke the next day with the intention of working through the morning and early afternoon (I had a 12:30 Skype appointment so we were planning around that) before driving the final hour and a quarter to the border at Tijuana to finally get our hands on those elusive pieces of paper.

The cruise up, overlooking the Pacific Coast, went as smoothly as one could hope for. As the highway turned inland for the final stretch to the border crossing we knew we were so close. That’s when we realized that all the cars on our side of the highway were being diverted off onto a random street in what didn’t appear to be the most pleasant part of town. It looked like maybe there was road work going on, though signs suggesting what was happening or where we were going were noticeably absent, as was any indication of men at work. We fell in line and followed the crowd for maybe a mile before a stroke of luck! A sign ahead proclaimed “Desviación,” so we knew we just had to follow the arrows to finish this little diversion and get back to the highway. The going was slow, but we finally made it back to the freeway going the direction we needed. Perhaps a minute later we spied an exit sign pointing us to San Diego, so we jumped off the highway only to realize we were heading in the complete wrong direction. U-turn. Headed back the right way now. Just up the road was another set of signs, this one even more confusing (the placement of road signs in Mexico isn’t necessarily the most intuitive) and before we knew it we were on another highway and then spat back out onto city streets again. And then, another stroke of luck! A small sign on a light post proclaimed it knew where we could get our import permit for our vehicle, and we knew the Migración and Customs offices were close to there.

We followed the arrows to a small office, and Brie ran inside to ask where we could find Migración. We were only a block away! After finding a parking spot we walked up to what was seemingly the back door to the border crossing complex. A security guard let us right in. That’s right, the back door to the walled border complex is manned by a security guard who apparently just lets people go right through. Somebody slightly more official looking walked us directly across the eight lanes of traffic entering Mexican customs and into a building housing the Migración office. Finally, the end was near. So we thought. Once there, obtaining tourist cards was simple enough. Filled out a form, walked over to Banjercito (the official national bank of Mexico) to pay, walked back to Migración, got the cards stamped and we were on our way. The teller at Banjercito had confirmed that the small office we had parked near was where we went to get our vehicle permit, so we hiked back to it. Walking up, however, it dawned on us that this was not, in fact, a government office, but instead was an agency for people wanting to permanently import a vehicle. We walked back to the security guard at the back door and asked if he knew where we were supposed to go. He said he did, pointed in the general direction of the agency we had just decided wasn’t the right place, and offered to have his friend take us there if we paid him. Hmmm, maybe it was the right place after all. So we walked back again. Nope, definitely not the right place. A cab driver, sensing our confusion, began shouting to us across the street. We told him what we were looking for, and he told us we would have to go to Otay, a suburb twenty five minutes away. He wanted to take us there (obviously), but it didn’t make any sense that we would have to go to Otay for a vehicle permit so we turned back around and starting walking up a ramp used for border traffic walking into Mexico. It was guarded  about halfway up by a lone member of the military with a rifle. He appeared very at ease watching us until we were about three feet away from him, at which point he sprung up out of his position leaning against the wall to block the path and ask where we were going. Lieutenant Hernandez, who actually turned out to be the nicest and most cheerful person we met all day, wasn’t sure where we should go, but he directed us back to the back door we had gone in originally. So back we shuffled, thinking we maybe needed to go back to a Customs office we had seen next to Banjercito. That office looked closed, so we asked the teller at Banjercito again. Apparently she hadn’t understood what we were looking for the first time. Now she informed us we had to DRIVE TO EFFING OTAY TO GET THE EFFING VEHICLE IMPORT PERMIT. She gave us a printed map to help us get there. It was full of really helpful landmarks, like Burger King Otay, and several unlabeled random arrows that quite literally pointed to empty spots on the map.

So off we went into Tijuana at rush hour. The next forty minutes was a trip from hell. Drivers in Tijuana seem to have little regard for their own lives or anyone else’s. By my estimation, we were within inches of being smashed to bits at least a half dozen times. We usually like to ride with windows down in cities to hear the buzz of activity, but with the open fires that burned beside the road every few hundred yards that seemed like a bad idea. We never did see the Burger King Otay, but Brie’s amazing navigator skills  took us off the main road, down a sidestreet filled with potholes that could swallow a VW Beetle, and right up to the Banjercito office. We were in a rundown part of town, the Banjercito office a hive of activity surrounded by seemingly empty buildings. We were the only customers, and we had come prepared with copies of passports, registration, and title. Apparently we needed tourist card copies as well, and they wouldn’t accept the passport copies because we had done them both on the same page and they had to be separate. Ditto on the registration copies, which we had copied multiple times on the same page. This may or may not have been a racket to force us to go pay for copies next door.

Finally, copies and credit card in hand (a temporary vehicle import permit requires a deposit which is returned when the vehicle leaves the country) we marched in, got our permit, affixed it to the windshield, and journeyed back out into rush hour to try to figure out how the hell to get back to our hotel in Ensenada. All that was left between us and getting on the ferry now was two days, 850 miles, and a whole lot of hoping that tickets weren’t sold out.

Update: Just when you thought this whole mess was over. A few days after we left Tijuana a couple strange charges showed up in our bank account. One was for twelve bucks at an OXXO (think Mexican 7-11) in Tijuana. The description of the other was not immediately recognizable, but looked to be in Tijuana as well and was for two hundred dollars. After talking with the fraud detection unit at our bank, they confirmed that both charges were in Tijuana and both came from my card – the second charge was at a jewelry store. The only time I had used the card in Mexico was at Banjercito. This, as far as I can reason, leaves two possibilities: