A Saturday in São Paulo

Last Saturday marked six years since the day of our wedding. Our plans for celebration were loose at best, being generally outlined as ‘have a great day’, ‘go do stuff in São Paulo’, and ‘eat and drink whatever we want’. Well, not to brag, but we totally nailed it. After taking the dogs out to stretch their legs and mapping out some potential subway routes, we hit the streets of the big city for coffee and breakfast before jumping on the red line on our way to Avenida Paulista.

Note: Being the Saturday before Easter, people everywhere were walking in groups with flags or signs, possibly on their way to a large central church via dozens of tourist buses lining the streets of downtown. All along our walk were hoards of people in everyday attire migrating towards something we couldn’t see.

Avenida Paulista is to São Paulo what Fifth Avenue is to NYC and the Champs-Élysées is to Paris. It’s a big road with money and tall buildings and businesses and shopping and clout and some of the most expensive commercial real estate in Latin America. Though less than 2 miles long, it is home to a number of broadcasting stations as well as the internationally renowned fine art museum, the Museu de Arte de São Paulo, or MASP. We meandered slowly down the large boulevard stopping periodically to take in a view or watch a performance or snap a photo. It was a nice stroll, low key on a Saturday. 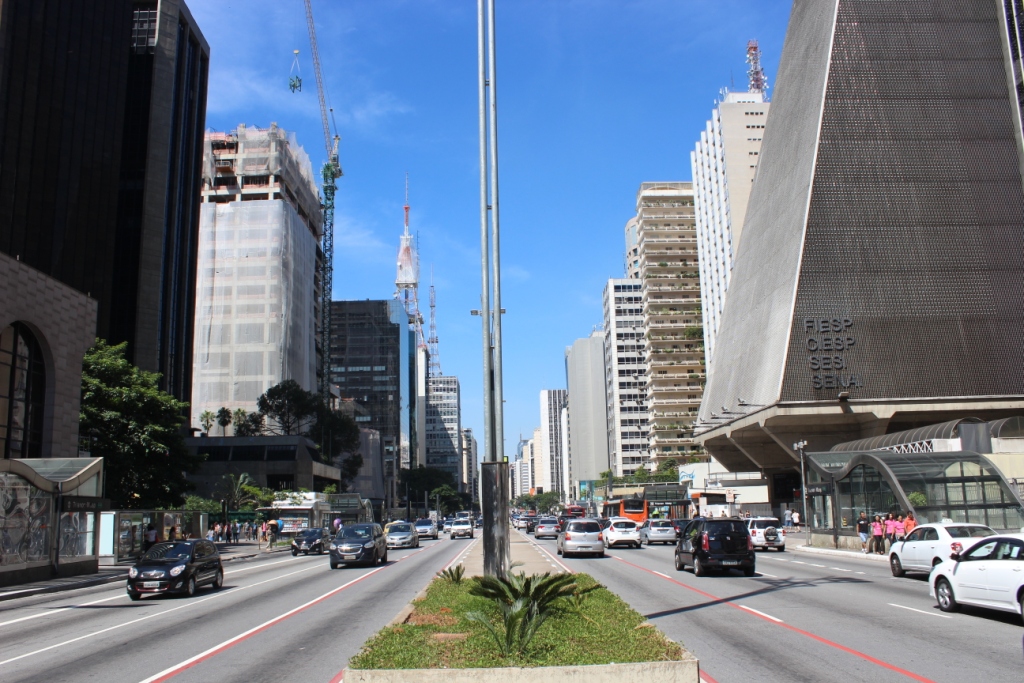 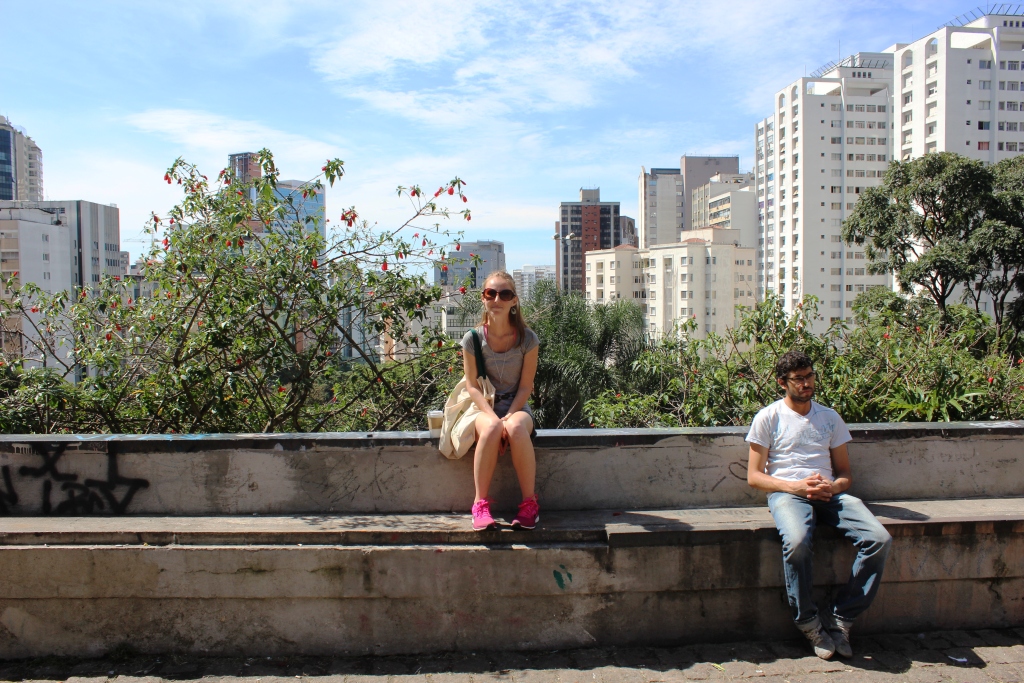 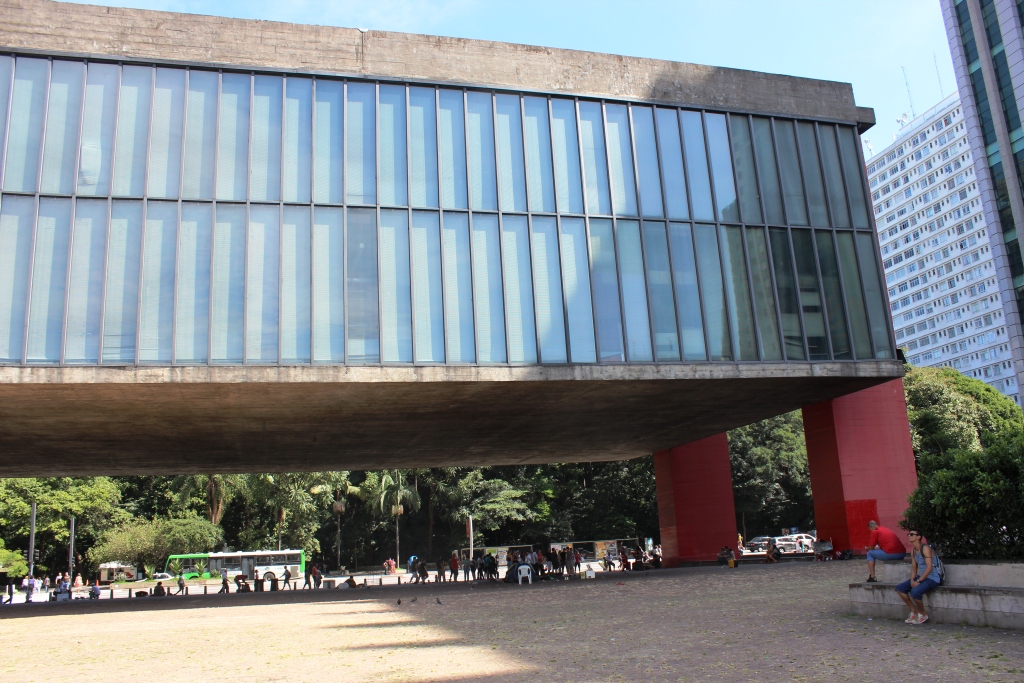 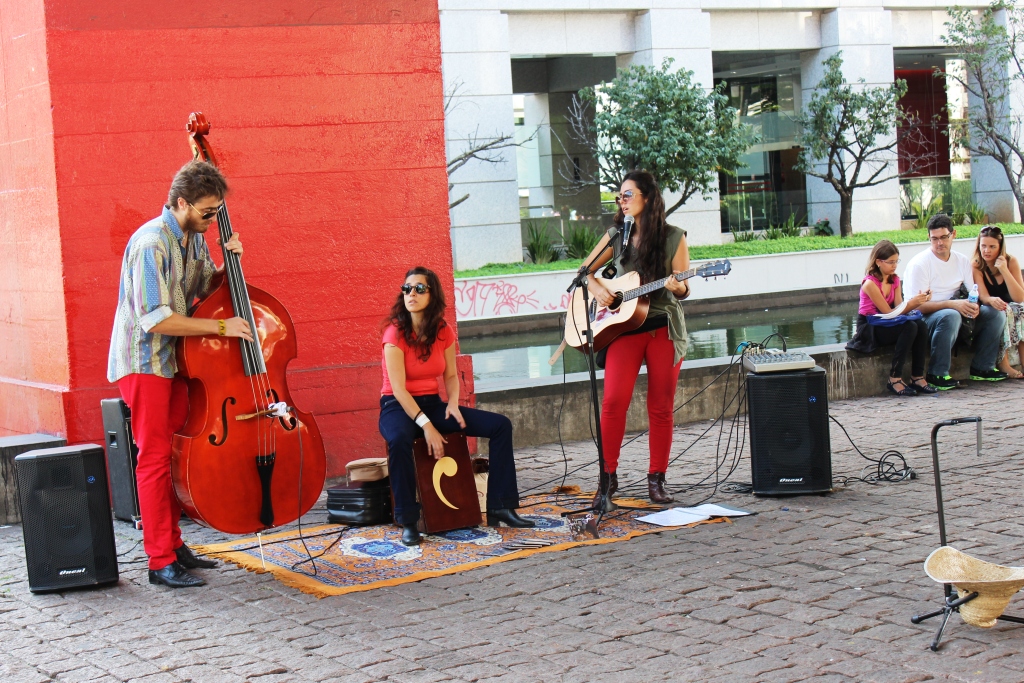 At the end of the thoroughfare we headed west toward the Calixto Market, a supposedly enjoyable Saturday affair that Ian had read about a couple of hours earlier. Walking along Rua Teodoro Sampaio, we counted block after block of almost entirely music stores. Guitars of all shapes, sizes, colors, and styles hung on the walls next to brass instruments and woodwinds that looked out over the drumsets, keyboards, and amps on the ground level. There were a couple dozen of these music shops, each one essentially the same as the last, but with a different name and sometimes a slightly different arrangement. The buildings were much smaller than in our neighborhood downtown and the nearby Avenida Paulista, and that, combined with the open front music stores and increasing numbers of craft vendors on the street as we walked, gave the area a familiar and welcoming vibe. It simply felt like a cool part of the city. Soon, we were upon the market, a tight maze of tented booths on a narrow block not entirely dissimilar in product offerings from the Dorrego Market in Buenos Aires. The crowd moved slowly through antiques and artwork and jewelry and furniture. A food court of sorts set up in the middle was far more lively and the scents alone were enough to get the mouth watering. The blocks facing the plaza where the market was held were active as well with stores and restaurants and off shoot markets of their own. One that we walked through was full of quirky clothing designs, and at the street a long line had formed at a cart selling real fruit popsicles and another at a food truck selling Mendoza wines in plastic, but stemmed cups. It was eclectic and charming and maybe a bit hipster even.

Note: Antique markets are basically flea markets, but with more street cred. It wasn’t until this weekend while thinking that we should have this type of activity in the states, that I realized we do! We used to love visiting Raleigh’s Flea Market! Don’t judge if that was obvious to you. Why do we call our markets “flea” and others “antique”? 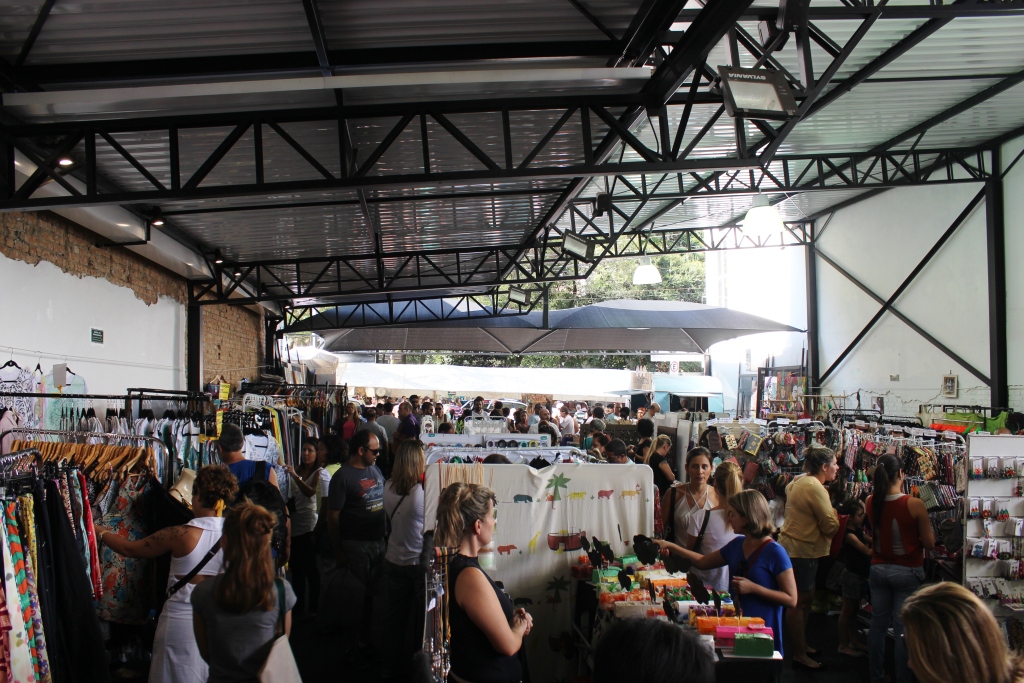 We stopped for some sushi a few blocks from the market and passed through a large and beautiful cemetery before continuing northeast towards Estádio do Pacaembu, a municipal futebol stadium that hosted World Cup games in 1950 and is now the home stadium for Corinthians’ Timão (the highly decorated top level team within the Sport Club Corinthians Paulista). Pacaembu houses the Museo do Futebol (pronounced: fu-chee-bohl), which was one of our few must-dos while in São Paulo. When we attempted to buy tickets, we were pleasantly surprised to find that admission is free on Saturdays (usually R$ 6 / $2.75 USD per person). Sweet!

I had planned to write an entire segment here about the museum, but while preparing, I found this handy video that I feel covers everything perfectly and which I have included below. One of my favorite parts (and there were many – also, SPOILER ALERT – don’t read on if you’re going to the museum soon), which they only allude to in the video, was leaving the area underneath the stands that displayed giant, energetic, and loud projected videos of chanting fans against the concrete and rocks and creatively placed screens and walking into the next room, a small, black, silent tunnel displaying a single short film on repeat of Brazil’s heartbreaking loss to Uruguay in the 1950 World Cup after a late second half goal put their neighbors to the south ahead for the win. Talk about an interactive museum… they even succeeded in getting our emotions involved!

Note: Fear not, the letdown was short lived (the next room was quite lively again), much like Brazil’s experience with not being the best. They won their first of 5 World Cup titles, the most held by any nation, in 1958. 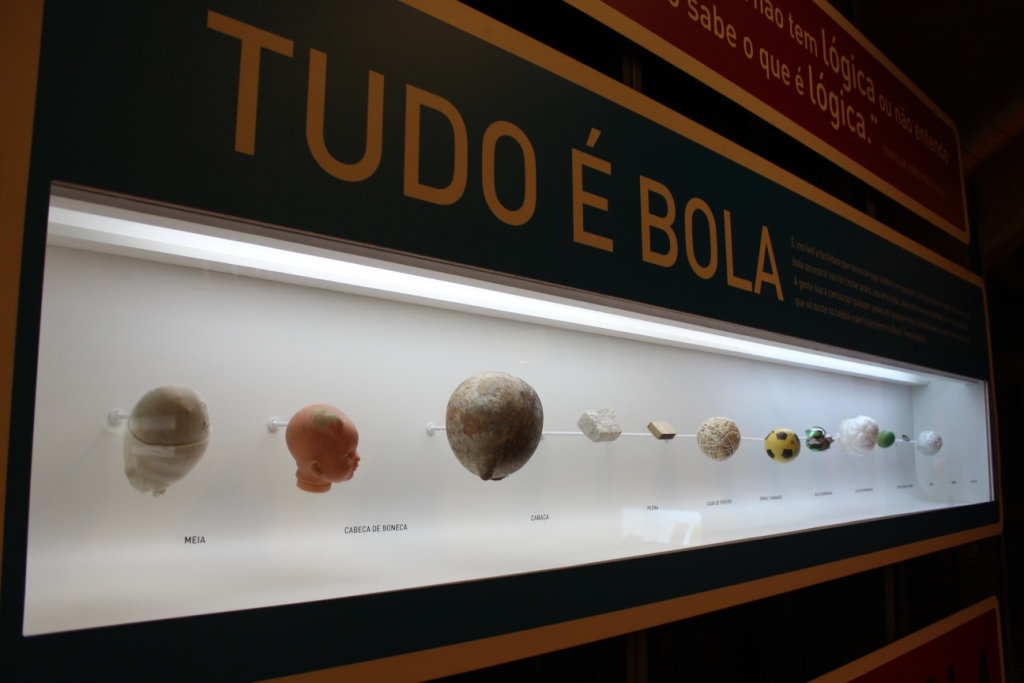 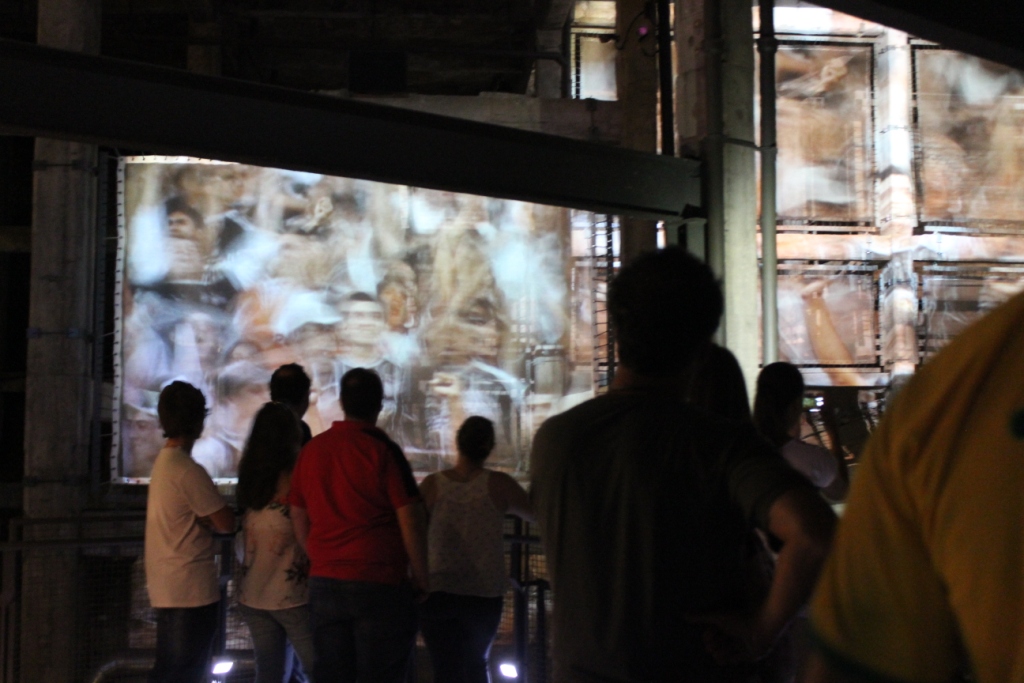 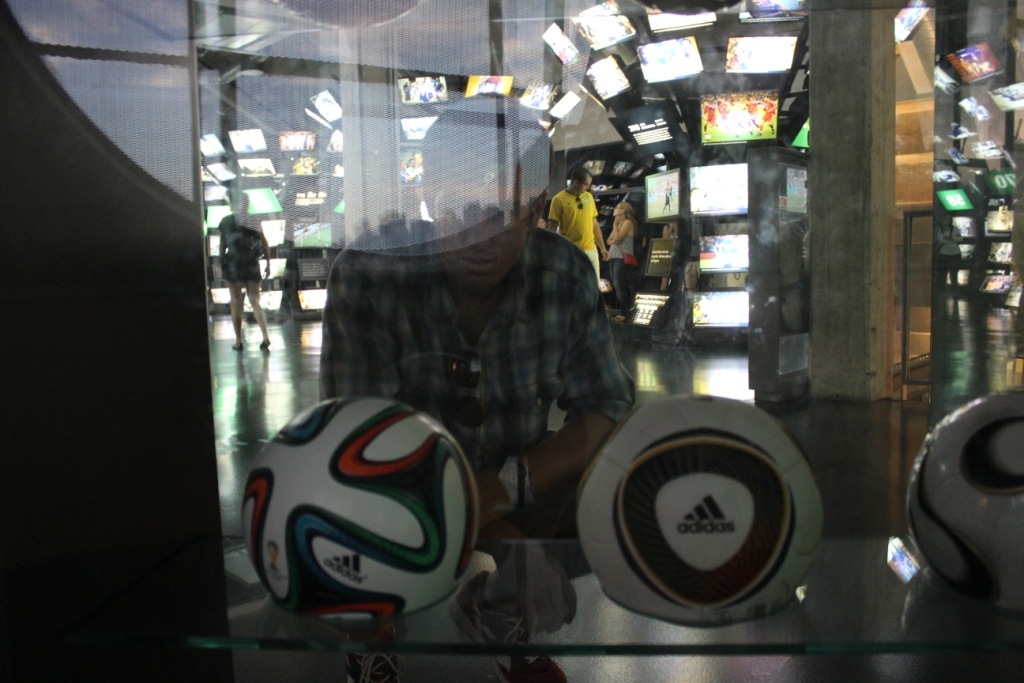 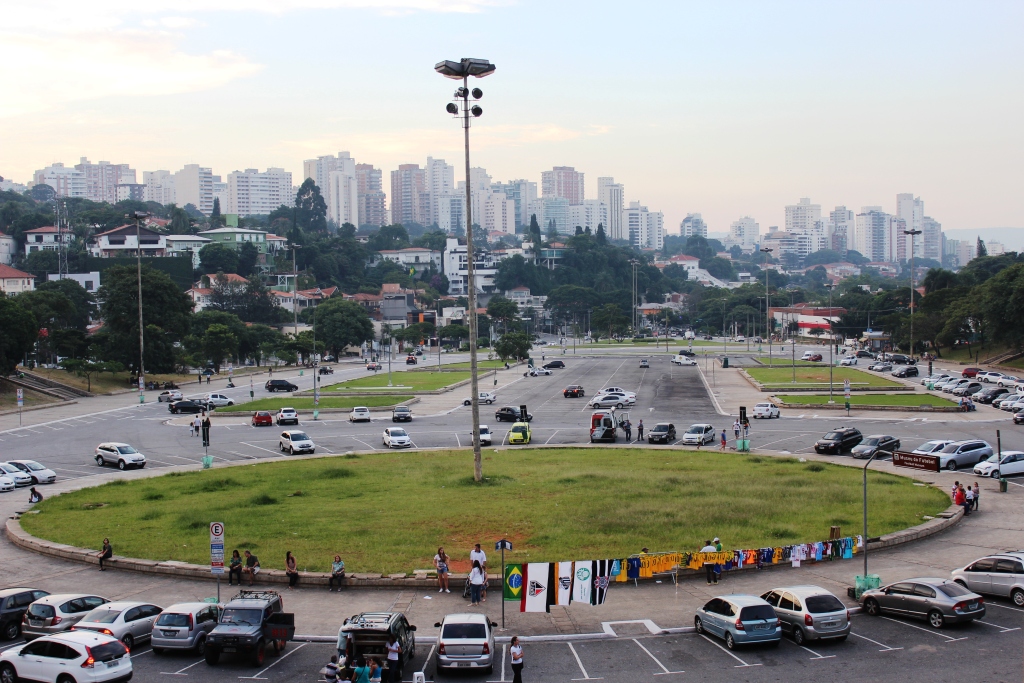 After a quick pit stop at home to give the dogs some love as we showered up for the evening, we grabbed a couple of beers at the corner joint across the street and then walked a few blocks to the Flying Sushi for dinner and our second round of Japanese food for the day. It’s not a stretch to assert that a person couldn’t walk two blocks in São Paulo without encountering a diner-esque, open front restaurant. There are at least six within half a block of our building. The front of the place is usually entirely open (garage door style) and with seating at either plastic tables on the sidewalk or around a central counter on stools. They serve casual food and all kinds of beverages, including freshly made fruit juices and beer. Often an old television in a corner is showing a futebol match. We’ve found a spot we especially like a couple of blocks away that is great for mid-week people watching, but on this Saturday, we just scooted down to the one across the street. We enjoyed a couple of Itaipavas and talked about our marriage, things that are going well and that we love and appreciate about each other as well as things that we think we could work on over the next year. It was a beautiful evening and an equally wonderful conversation, a new addition to our anniversary that will now be a favorite tradition as part of our commitment to making the choice to be together each and every year rather than watching the time pass through the lens of a promise we made long ago.

Floating along on the intoxication of love (and also beers and hunger, but mostly love), we ended our day with “poco de cada” at the Flying Sushi, which means that we couldn’t even pick what to start with after ordering all-you-can-eat and just left our dinner in the hands of the restaurant. Plate after plate of all kinds of incredible foods made their way to our table, and when we finished the first circuit, we called for another. Every single dish we tried was fantastic, from sashimi to grilled salmon and mushrooms to spring rolls. Even the strawberry kiwi sake-caipirinha, Brazil’s drink with a Japanese twist, that I treated myself to was an absolute treat. The environment was casual, the dinner was delicious, and the staff were kind and fun. It was a fantastic end to a great day in a seemingly endless city. 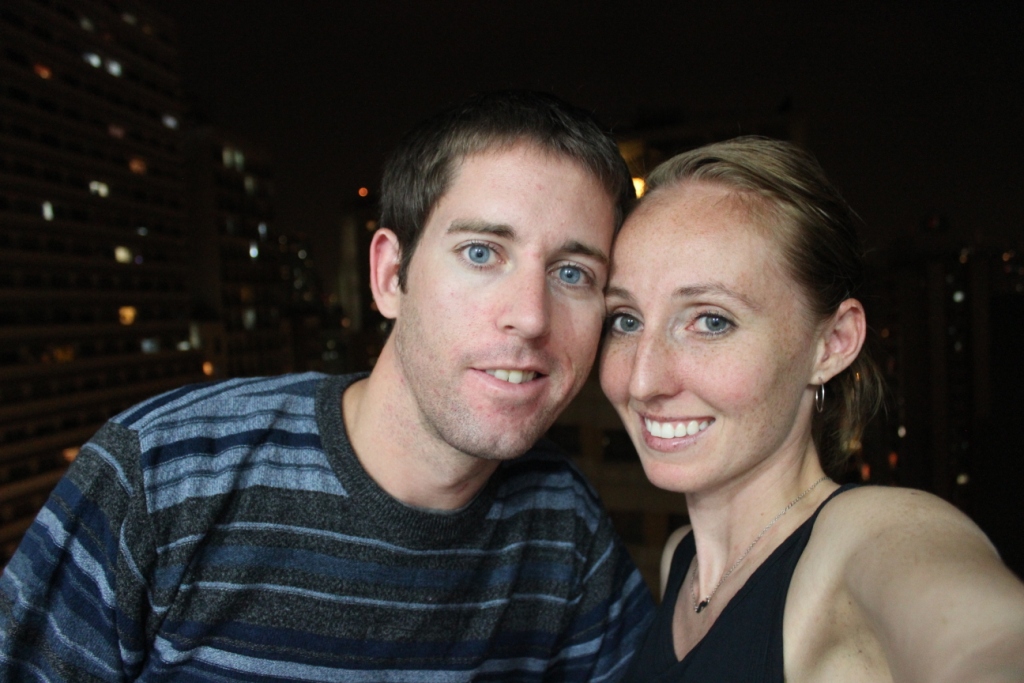