A Day at the World Cup: USA vs. Ghana

6:30AM – Leave our apartment in Paulista, just north of Recife proper.

7:20AM to 11:15AM – Driving, driving, driving northward to Natal, blasting our “American Music” playlist the whole time. CCR, Skynyrd, the Boss, Nelly, Tom Petty, Mellencamp, and all kinds of 90s music. Excitement builds.

11:15AM – Check into our hotel, Agua Marinha Flat, that we found for the actually-quite-amazing-considering-how-expensive-hotels-are-due-to-the-Cup price of $78 per night.

11:55AM – Drop Eric off at his hotel close to the stadium. He’s got to somehow track down the unresponsive guy he paid to get his ticket or else find a new ticket. Best of luck to you, sir.

12:00PM – Hop back on the highway from there to drive a couple miles south to the official US Soccer pre-game party.

12:05PM – Decide we should eat a bit before heading to the party to save some money.

12:15PM – Get lost for a bit. Stumble upon a small neighborhood boteco (very casual bar/restaurant), grab a couple pasteis and a bolinho.

12:30PM – Roll into Arena Pepper’s for the official US Soccer pre-game party. Park right in front because no one else drove here. 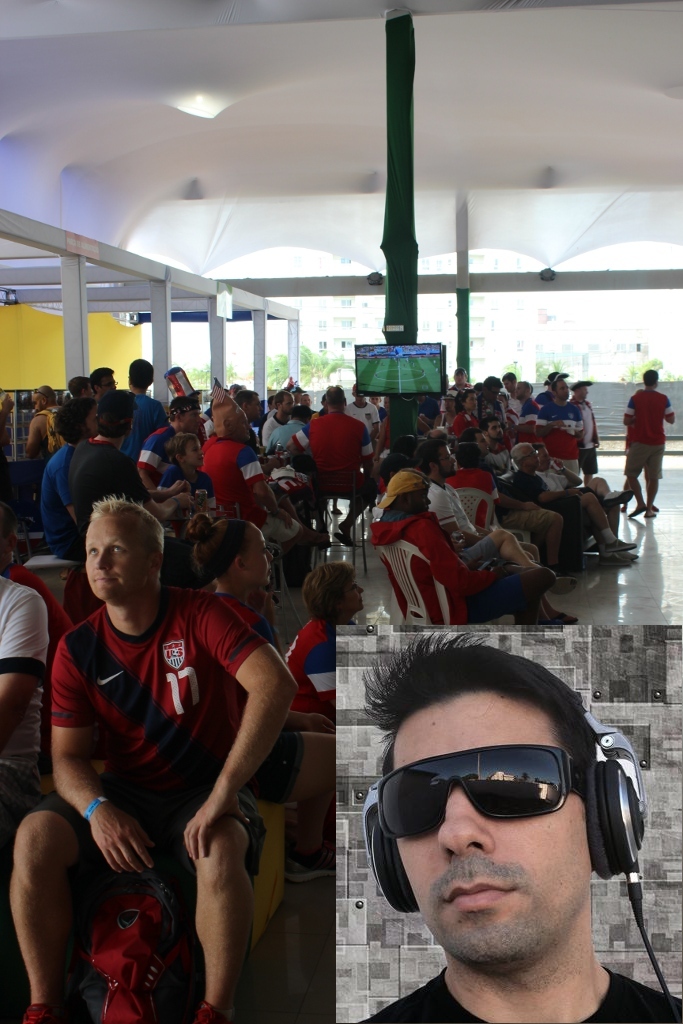 See what I mean? That's DJ Gunner in the bottom right. No seriously, that's his picture.

1:15PM – Starting to realize this party is pretty awful. The Germany-Portugal game is on a giant screen, but said screen looks like cutting edge technology from 1978 and is barely watchable. Thus, people have gathered in small cliques around the many eye-level flat screens spread throughout the venue. For some reason there is a DJ playing house music. Why anyone would think the US international soccer crowd would be into having a cool DJ is beyond me. The pulsing bass is literally making me feel nauseas/anxious/like I’m having heart palpitations. There is no energy here, just people sitting around staring at screens. Good thing we’ve got a second party to go to – the American Outlaws party just a few blocks from the stadium starts at 2:30PM.

1:45PM – Halftime of GER-POR. Nothing sounds better than going outside and getting away from this physically awful music. When I come back in, Brianna has found a couple people sporting Sporting KC “For Club and Country” scarves. Cool. All about our age, a couple of them are native Kansans, a couple more moved there from elsewhere.

2:10PM – We all decide this party is lame and that it’s time to get moving toward the AO party. They were going to take a cab, but hey, we’ve got a car, no problem, just hop on in!

2:15PM – Still waiting for Brianna to come outside with the rest of us. She has spotted someone with a half USA half Mexico jersey that she thinks is cool.

2:20PM – “Booooooooooooorrrrrrrrnnnnnnn in the U.S.A.! She was…….. an American girl! Wheel in the sky keeps on turning!”

2:45PM – Parking spot, three blocks from the party. Not bad. Parking isn’t exactly in high demand at a game between two countries from different continents than the one we are currently on. 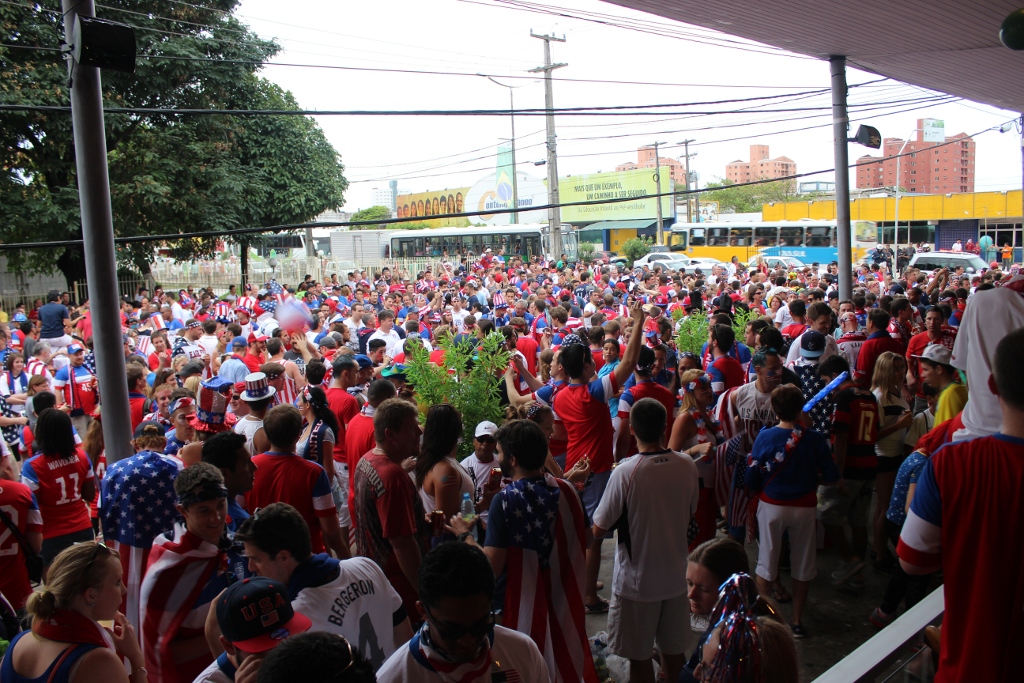 Notice the difference between this party and the other?

3:00PM – This party is packed, spilling into the street, and 1000 times better than the first one. How do we get inside to get some drinks? What, there’s a list? They decided there were too many people and only people on the official American Outlaws trip can get in? Shit. “His name? (pointing to me) His name is Luke. (pointing to the list) Right there.” Solid work, Jerrod. I’m in. Brianna was apparently not a problem – I think they were just happy to even out the ratios a bit.

3:05PM – This party is awesome. The guys pick up our first round in thanks for the taxi service. People are dressed up in all kinds of swag. Beach balls are flying around. Every now and again people start chanting or singing.

3:30PM – Starting to get good and buzzed. Just keep those $5 cans of Brahma coming.

4:40PM – We somehow remember we need to get our tickets from the car, and the AO party shuts down at 5:00 for a march to the stadium, so we rush out the door. Look, a Banco do Brasil (the only bank that has routinely allowed us to pull cash out). And we need some cash. Better stop. Oh shit, it’s Big Bob’s Burger! Should we get a milkshake? Lines too long, better not. There’s the car. Change shirts. Re-up on deodorant. Tickets? Check. Look a coffee shop. Let’s do it. Quadruple espressos? Yes, please. Oh, you don’t have change for my R$10? That’s fine, got to go.

5:00PM – Back at the AO party. What’s left of the “march” seems to be more like a bunch of drunk people wandering around in different directions. We pick a direction and go.

The scene outside the stadium.

5:10PM – Outside the stadium. Most people are not going in yet, choosing to keep the party going in the street. Seems like a solid choice to me. A delegation from Ghana comes marching down into the area. Everyone thinks it’s awesome. Fans from the two countries mix, take pictures, and smile gigantic smiles. Seems like we are all just happy to be here at this point.

6:20PM – Guess we better start to move towards the gates. Word is the lines are pretty long. HOLY SHIT IT’S ERIC! He’s got a ticket. Apparently his name is now Eduardo Alvares, or something like that. At least according to his ticket it is.

6:25PM – This line is moving pretty quickly actually. Brianna chats with a couple Ghanaian gentlemen on the way in.

6:45PM – In our seats. Warm-ups are wrapping up. This beer tastes mighty fine. 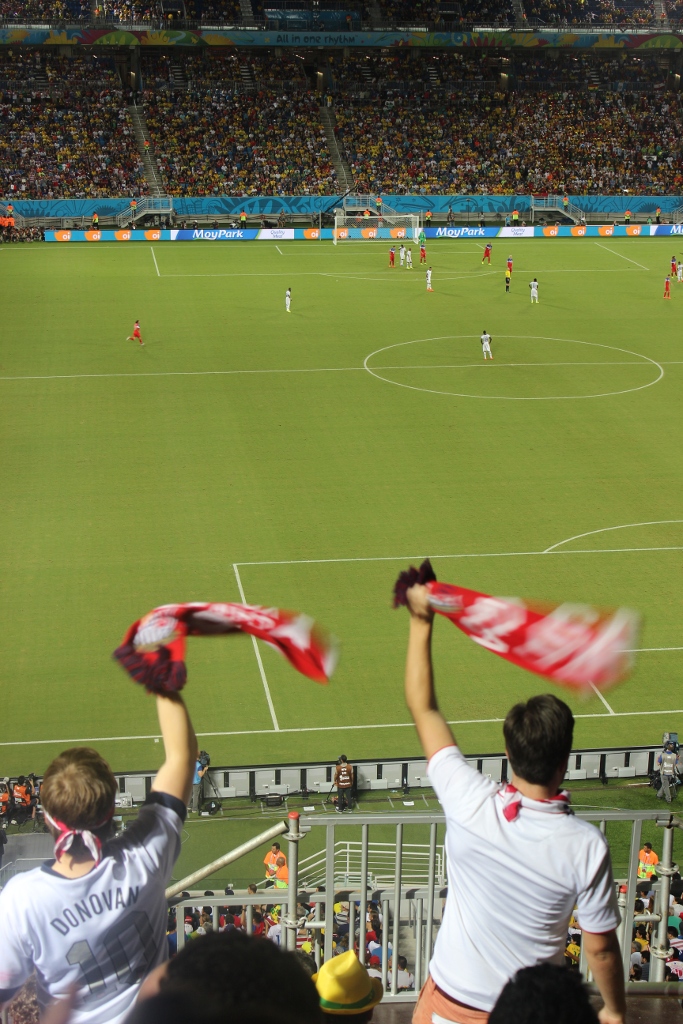 7:22PM to 7:45PM – Chanting, cheering, Ghana dominating possession but not finding the net. End of half, 1-0. Solid work gentlemen.

7:46PM – “I need to go to the bathroom. I need water. Here is the money. Get two waters, two popcorns, and two beers and I’ll meet you back here at the seats.” Ummmmmmm. Alright.

8:30PM – Things are looking good. Ghana is still controlling possession, but their crosses aren’t finding anyone on the receiving end. All we have to do is hold.

8:37PM – NOOOOOOOOOOOOOOOOOOOOOOOOOOOOOOO. Equalizer. Total deflation. Heads drop into hands and mouths gape open all over the stadium. In a heartbeat, throngs of standing, jumping, cheering, happy fans have slumped into their seats in disbelief. Dreams of making it out of our group dissipating in an instant. 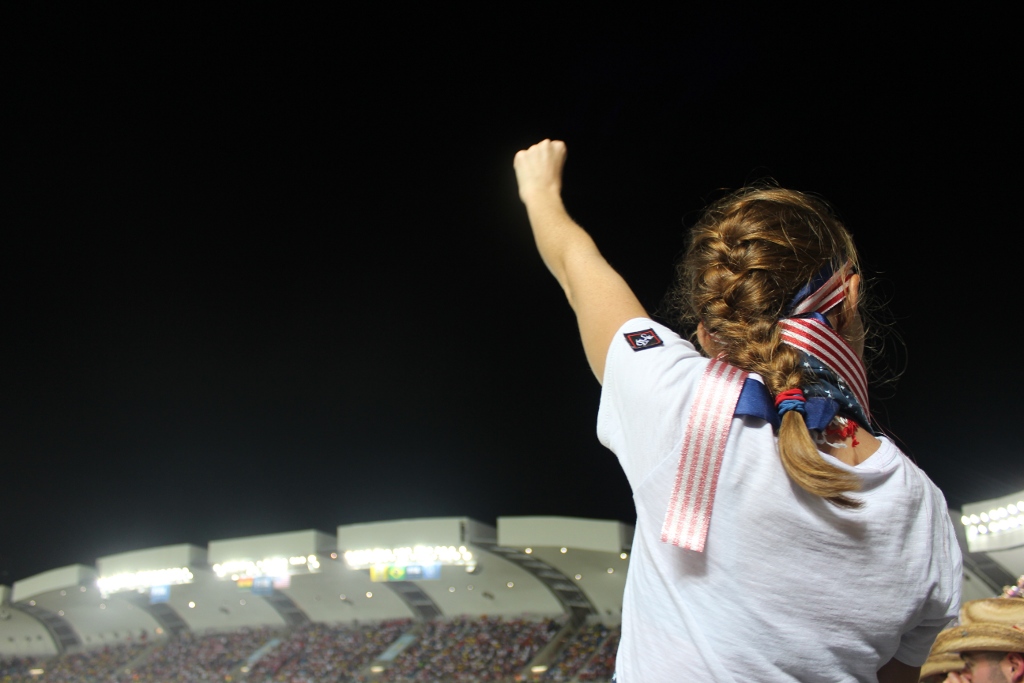 8:51PM – Better get a quick selfie in front of the field.

9:30PM – Celebratory Skols and snacks at the convenience store.

9:45PM to 10:30PM – Bumper to bumper traffic/victory ride back toward our hotel.

10:25PM – Three American randos ask for a ride. Whew buddy they are wasted. And not terribly polite to the people giving them a free ride down the road. We only take them half a mile, because then we are at our hotel, but still that’s like 8 minutes of saved time and they barely even say thanks.

10:30PM – Parked in the hotel lot, we immediately head out for some food. Almost everything is closed, but we find a food cart a couple blocks down. All they have is meat sandwiches, but we need food. After having some guy explain to me the different kinds of meat on the menu, I just go with the cheapest one. Brianna, for some reason, finds it so hilarious that I only ordered a single sandwich that she almost dies from laughter.

11:00PM – One more round and one more snack from the convenience store. American guy comes in and asks the casher if there is an ATM nearby. In English. Obviously, that’s not going to work. I translate for him, cashier tells him where the closest one is, and guy walks out WITHOUT SAYING THANK YOU TO EITHER OF US. C’mon bro.

11:15PM – Finally back in our hotel room. At some point I accidentally end up dropping an open bottle of water on the bed. Oops. It’s mostly on the sheet, so I hang it up to dry. Kind of. Hopefully they don’t think we wet the bed or something. 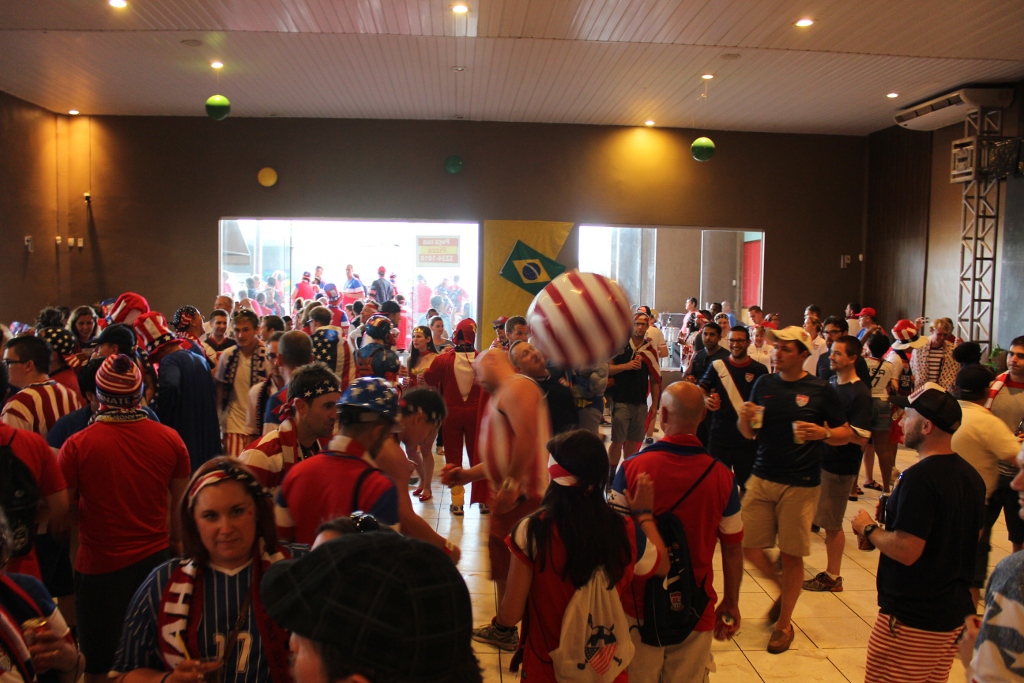 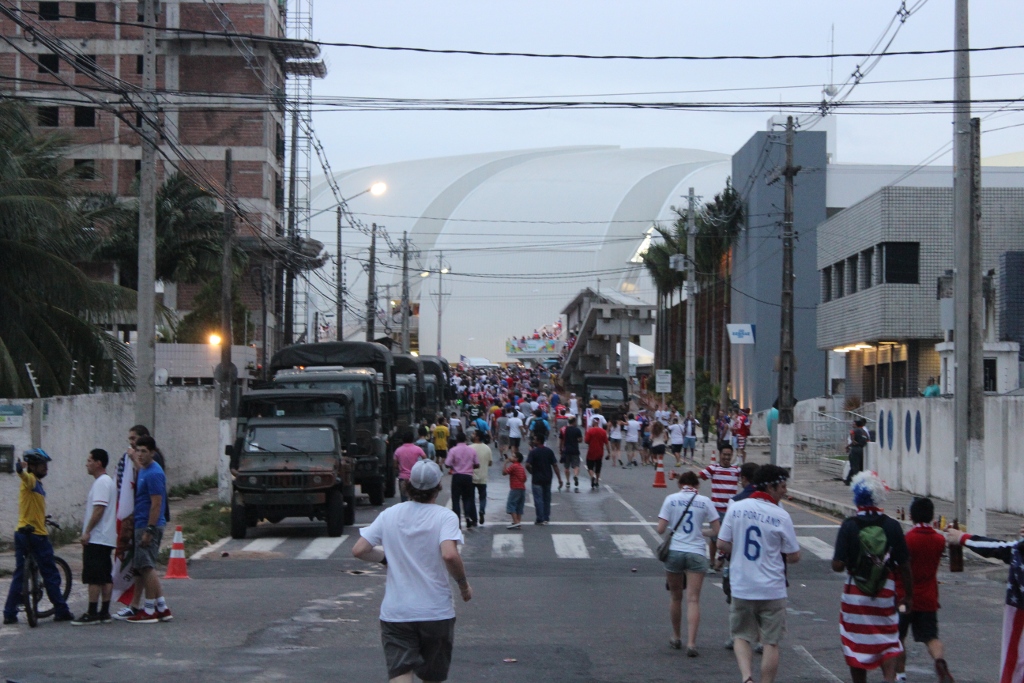 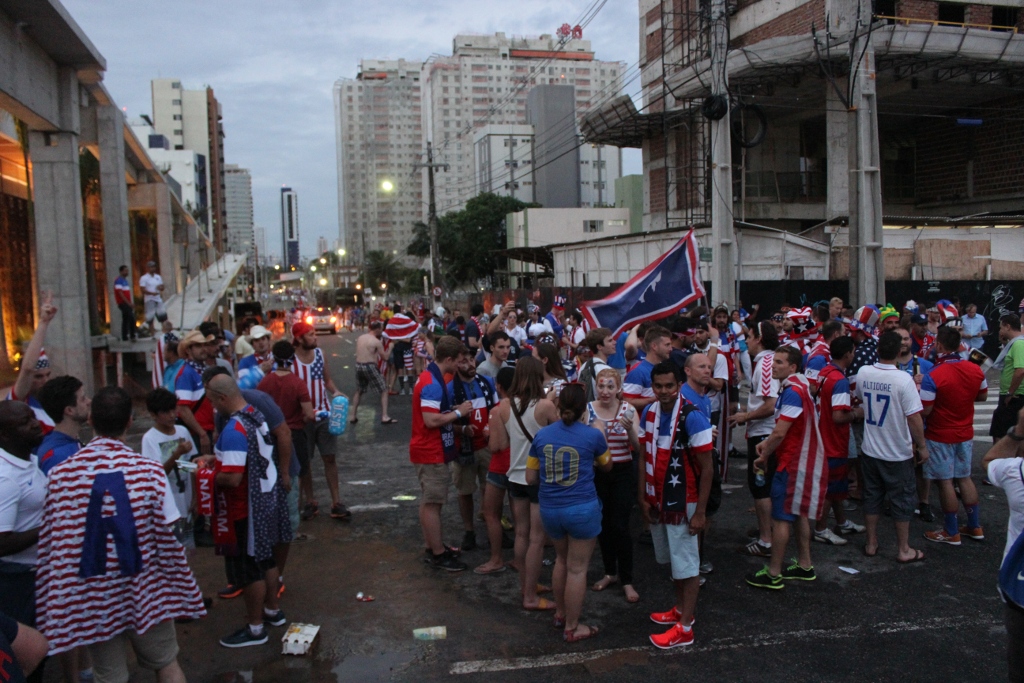 Why go in the stadium when you can hang out in these environs? 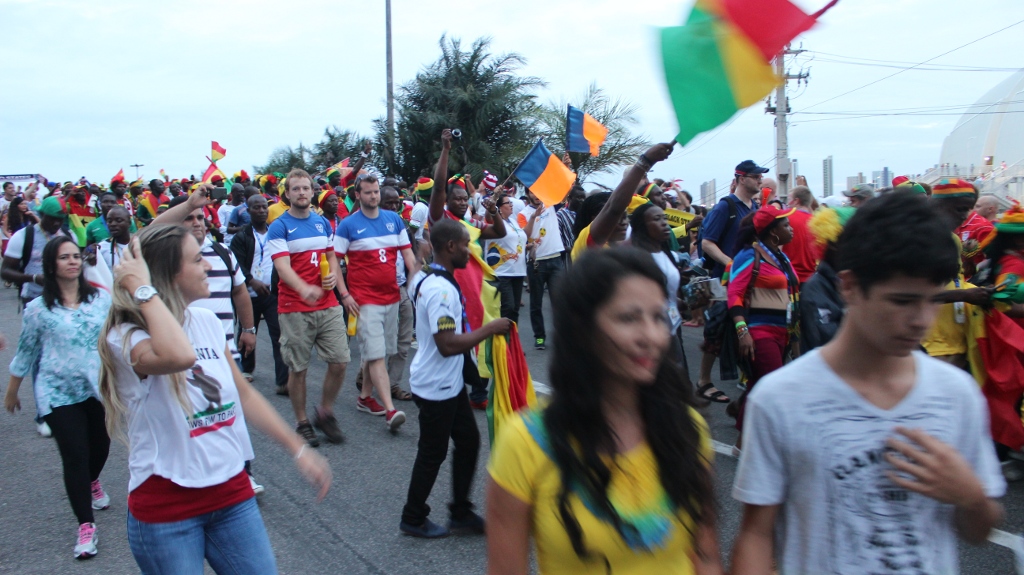 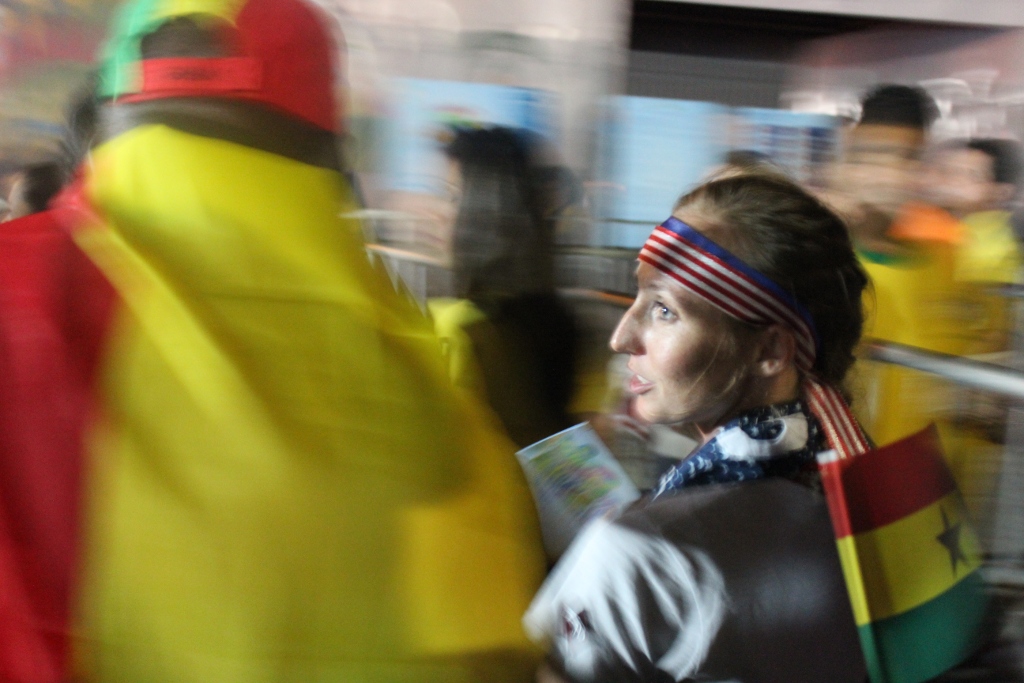 Brianna making friends in line to get in the stadium. 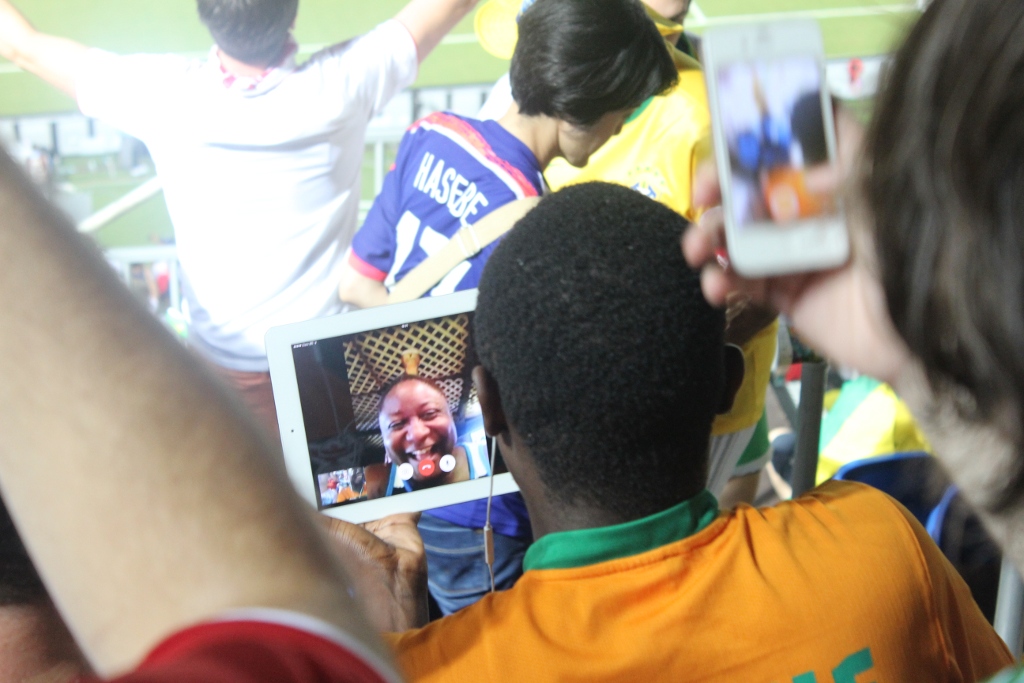 Facetiming before the game. 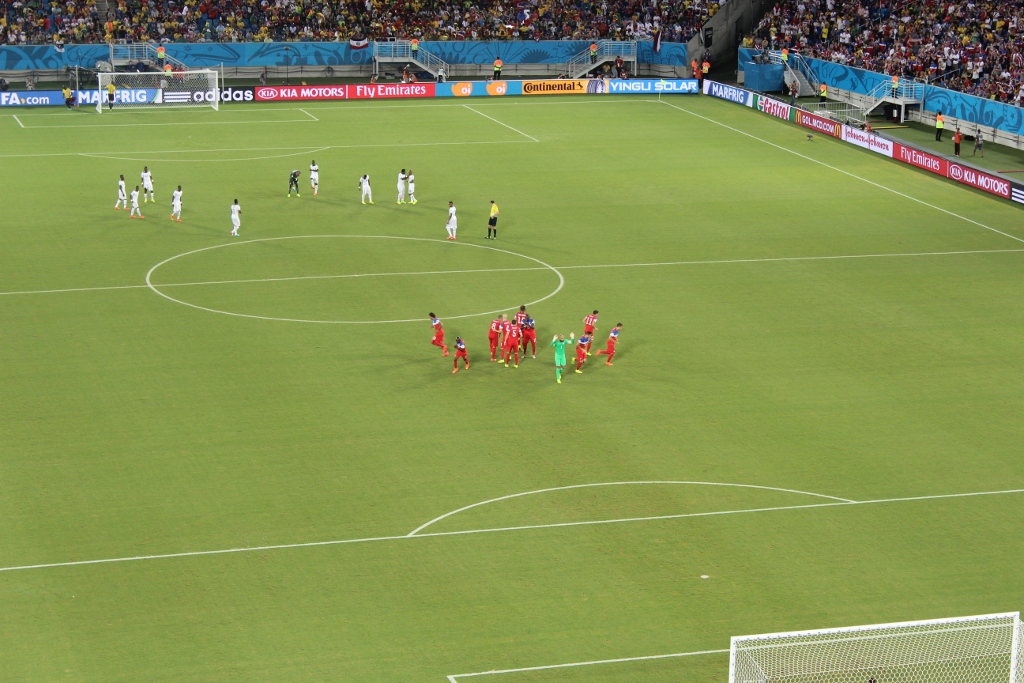 Team USA breaking for the start of the game. 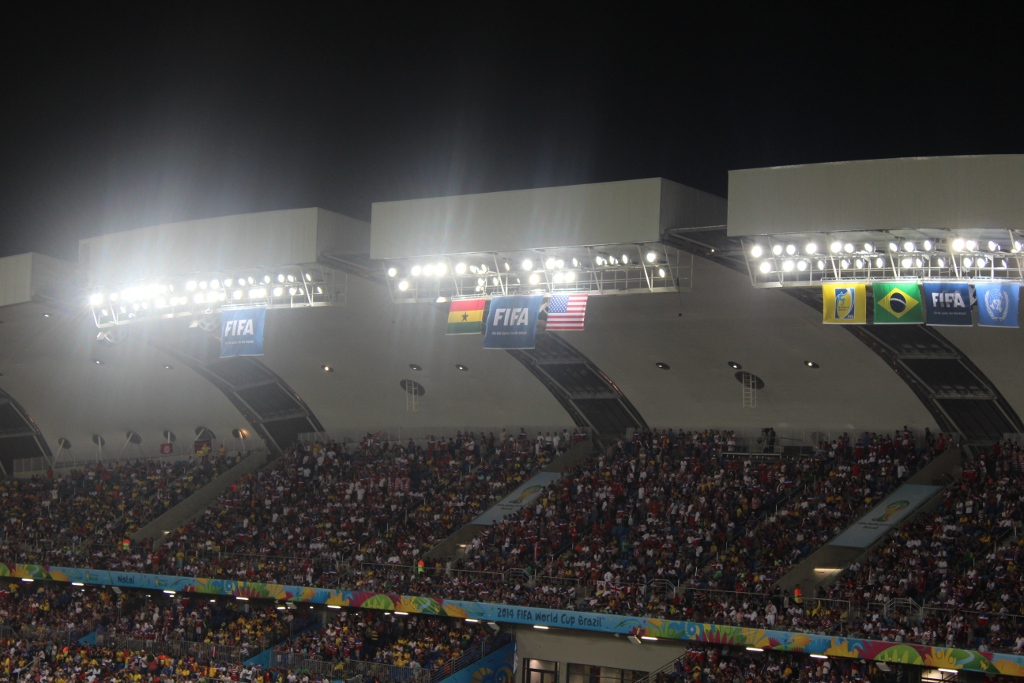 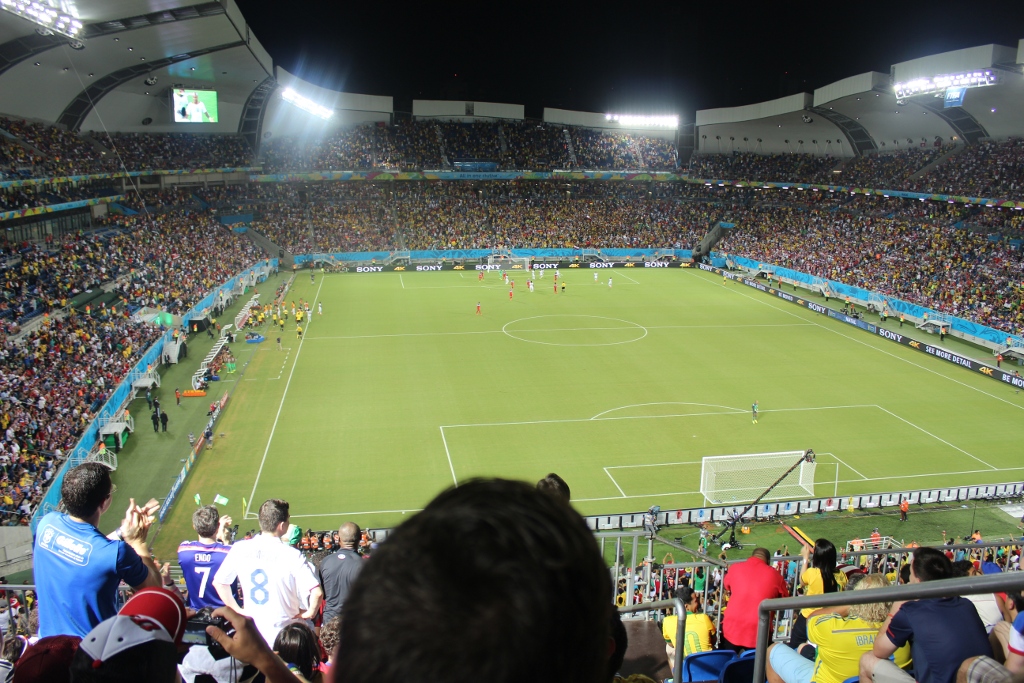 Wider shot of the stadium. 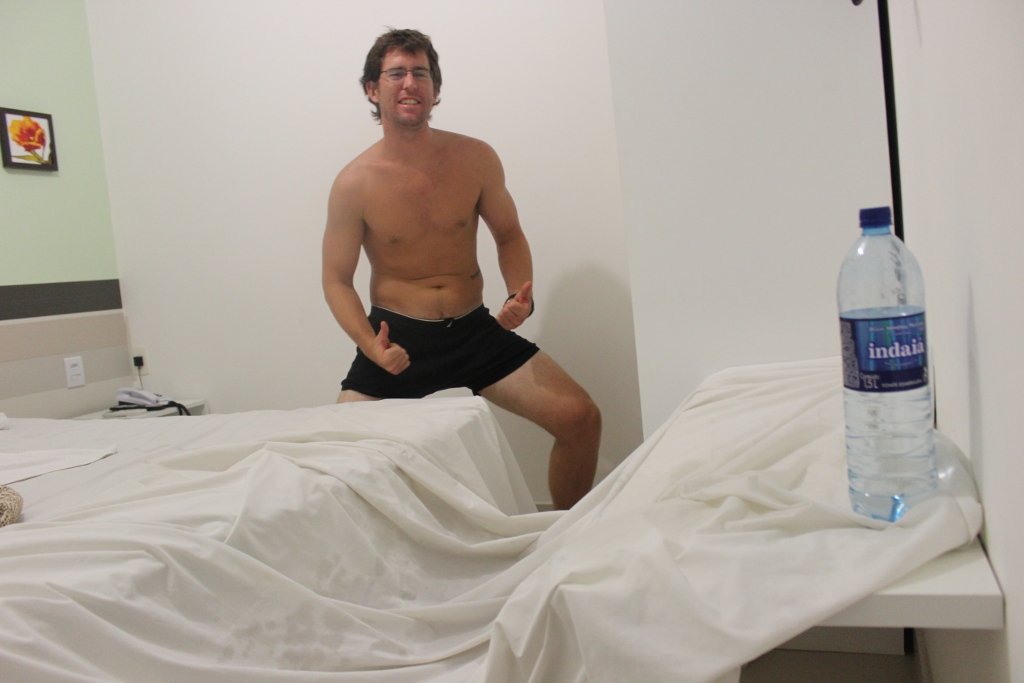